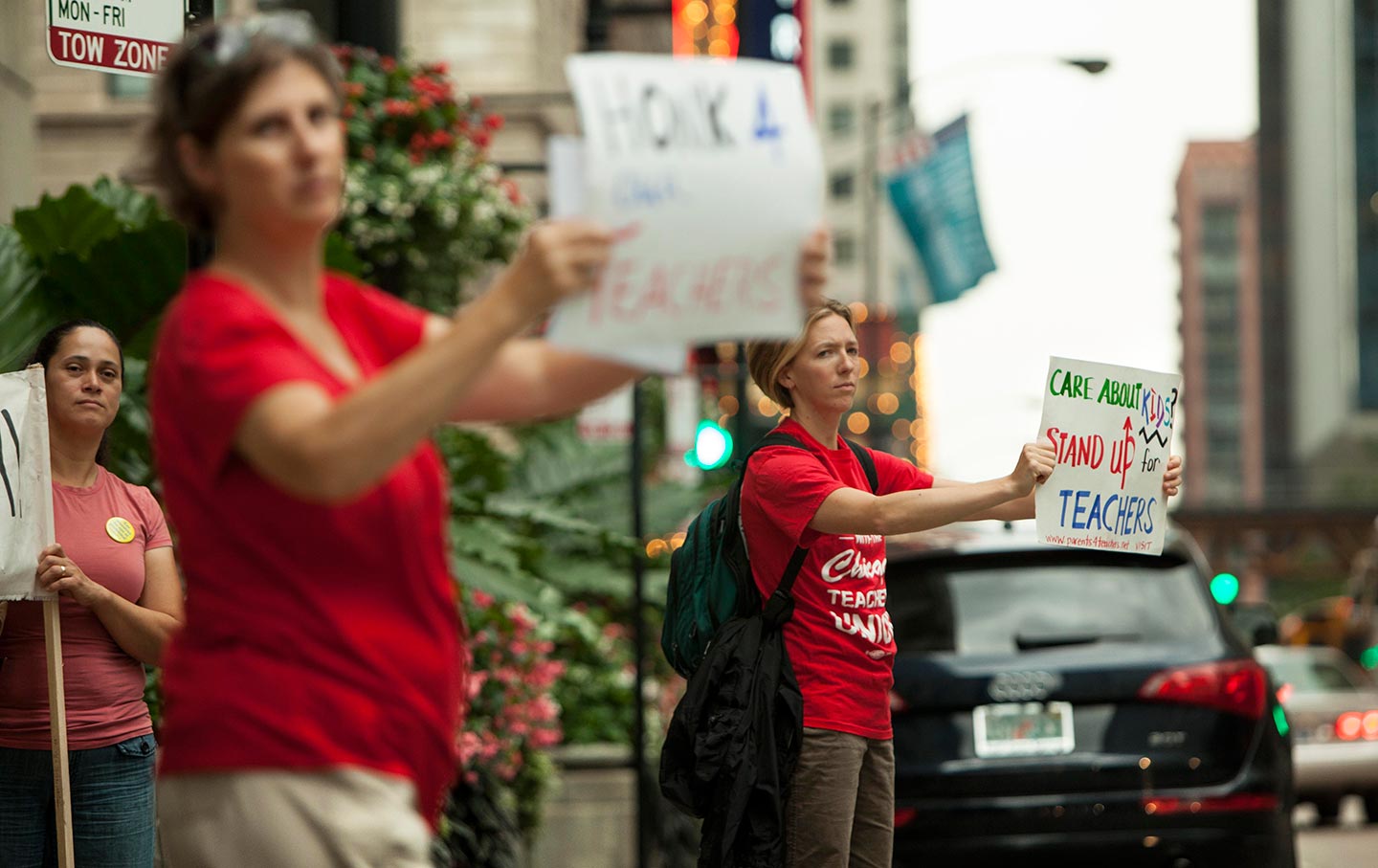 The beginning of a resurgence of strength among America’s unions today can be traced to two seminal events: the September 2012 seven-day strike by Chicago’s teachers, and the less-noticed June 2010 internal union election at the Chicago Teachers Union. That was when a slate of progressive, forward-thinking educators won all the top seats inside their union, ending nearly three decades of do-nothing unionism at the third-largest teacher’s union in the country. Jackson Potter, a teacher and one of the architects of that victory—and the subsequent strike—told me back in the fall of 2013, “Our ability to connect with the community has been key for us. But I worry about our ability to have much success over the long run if there aren’t other worker-led insurrections.”1

Potter and 26,000 coworkers helped set the stage for the Chicago strikes, but they couldn’t have predicted the ensuing string of successes toward rebuilding a high-quality public school system, driven by educators from West Virginia to California. The strike that many people regard as the kickoff—the February 2018 West Virginia teacher’s strike—can also be traced back to Chicago. Despite a four-decade general assault against workers and unions, and a specific and especially vicious two-decade attack against America’s teachers, when the Chicago teachers walked in September 2012, the public sided decisively with them—and against Mayor Rahm Emanuel. Suddenly, expectations were raised that workers could fight, even strike—and win. Now with a strike date set for October 17, the focus returns to Chicago’s educators.2 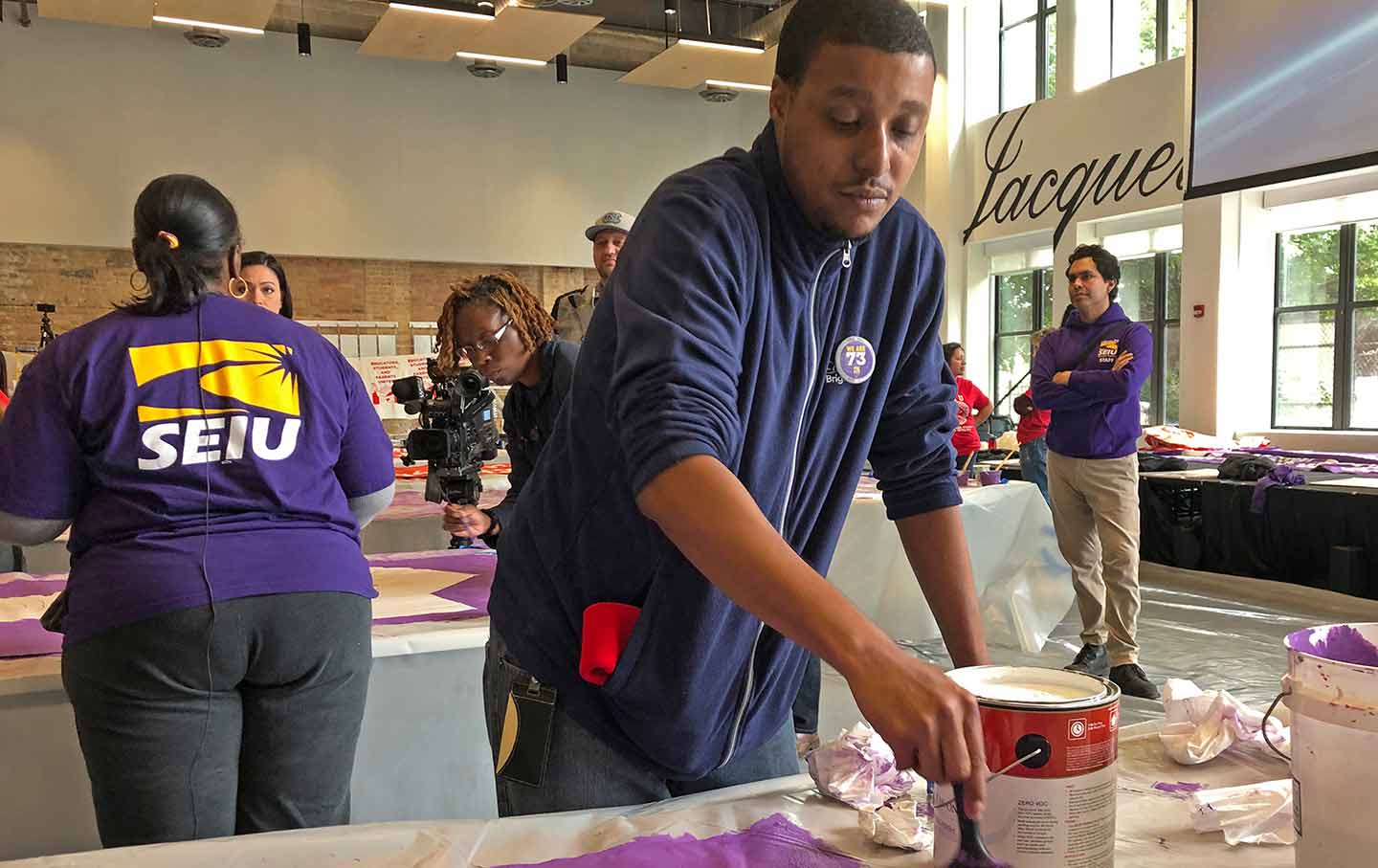 Chicago Teachers Are Fighting for Their Students’ Futures

Much has changed since 2012, but one factor is refreshingly constant: The teachers’ union remains bottom-up, democratic, resilient and strong. Two other groups of workers in two different units, represented by SEIU local 73, have also voted to authorize strikes on October 17. These additional workers include an important group in the Chicago Public Schools, the 7,500 special-ed classroom assistants, security guards, bus aides, custodians, and parent workers, and a second group of 2,500 workers in the Chicago Park District. That group, which has never authorized a strike before, is comprised of supervisors, attendants, lifeguards, landscape laborers, and instructors. Taken together, that’s 35,000 workers whose day jobs are about empowering children—not to mention allowing the 180,000 parents of Chicago’s nearly 400,000 public school students to go to work. All this has set the stage for a massive crisis in America’s third-largest city.3

Gone is the right-wing anti–public education, anti–teacher union billionaire governor, Bruce Rauner (though, given the preposterous nature of campaign finance laws in the United States, the new governor is also a billionaire, albeit a less hostile one). But in the driver’s seat sits Mayor Lori Lightfoot. “I think there are a ton of differences, not the least of which is I’m not Rahm,” she recently said.4

Perhaps more important, there’s more money on the table for these contract talks. In large part, that’s due to the diligent efforts of the CTU itself, which won a substantial change in state education funding. The funding formula now puts more money into the poorest school districts, a reversal of the formula in force the last two times the CTU’s contract expired, Potter told me. The teachers also added to the schools’ budget by winning state and local funding for their long-neglected pension, as well as local funding for future increases. Combined, Potter said there’s now over $1 billion more a year for Chicago’s schools. The CTU is demanding restaffing Chicago’s schools with nurses and guidance counselors, and more robust social services to help the poorest students in a school district that primarily serves students of color.5

“We feel it is our responsibility to figure out how to get the nearly 20,000 homeless students in our schools housed,” says Stacy Davis Gates, a high school social studies teacher and the current vice president of the union. “There is no way in the world you can expect the students to keep it together in a classroom, to take a test in a classroom, to complete homework in a classroom, if they don’t have what they need in terms of a stable home environment.” Although Lightfoot likes to point out she’s “not Rahm,” she’s actually retained the same chief contract negotiator as Rahm and many mayors before him. In fact, the current chief negotiator for the Chicago Public Schools, Jim Franczek (of the private law firm Franczek P.C.) has been the lead negotiator against front-line educators for decades. “I understood from an early age that it is management that makes things happen,” Franczek said in a 2015 interview, “and I wanted to make things happen.” Which just underlines the fact that it will be the mayor whose actions will ultimately determine whether the strike happens on the 17th.6

According to members of the union’s negotiating team, Franczek’s style is to try to force victory for his side by holding back on serious settlement options till the very last minute. His strategy, repeated over many contracts, is to force a narrowing of the subjects that will get addressed by the educators, and then, with hours to go to a strike deadline, suddenly make a “take it or leave it,” offer—frequently with some things educators want—but far less than students or the broader education community needs and deserves. When you read mainstream press coverage of the dispute, it’s worth remembering that it’s management playing brinkmanship with the lives of hundreds of thousands of people, not the union.7

A nearly identical management strategy failed this year in the Los Angeles teachers strike. After four days of robust picket lines, an outpouring of parent and community support and an all-out strike, Mayor Eric Garcetti summoned the head of the teacher’s union, Alex Caputo-Pearl, and, the LA Schools superintendent, Austin Beutner, to his office. Beutner told them to “narrow the topics to settle,” Caputo-Pearl told me. Instead, Caputo-Pearl insisted, “This strike won’t end until you expand the issues to include our proposals such as ending random searches, a green new deal, contractual provisions to help parents of students being threatened by ICE deportations, and, more.”8

In Gates’s view, despite the media’s obsession with the mayor and other individuals exchanging often heated comments to the media, “This is not about the people who are in charge as much as it’s about the systems of white supremacy that persist in every American institution and that must be dismantled in order for real justice and real equity to take place. And what we are seeing in this moment is that the institution is reluctant to release the resources that a school district with over 90 percent students of color deserve.”9

There have been last-minute offers: negotiations this past Saturday that resulted in management moving slightly on some core demands of the educators; they have also promised what sounds like big numbers—$2 million over the next five years for school nurses. Mayor Lightfoot repeatedly stresses that she’s made an offer for large raises—16 percent over five years—but wages aren’t the key issue in this contract fight. They rarely have been, in the education strikes that have rocked the nation for the past two years. Educators—along with nurses and health care workers—have been walking off the job in record numbers, demanding that the superrich and corporations begin paying their fair share of the cost of democracy and keeping Americans in good health.10

And while Mayor Lightfoot believes she’s got a mandate for her actions, she has said over and over that she can get a deal done. Her chief negotiator’s tactics might just bring an end to the honeymoon she’s still enjoying post-election, because a strike would likely result in a recently empowered Chicago City Council pouncing on her every move should the popular educators and their allies at SEIU be forced out onto the streets.11

The strikes that spread from Chicago across the nation are happening because energetic, smart rank-and-file workers are finally taking back their own organizations—their unions—after too many years of risk-averse leaders whose unwillingness to use the strike weapon contributed to the downfall of the working class. Many teachers in Chicago are stellar educators: After an eight-year stint as a full-time leader of the union, Potter has returned to the high school classroom to teach eleventh-grade classes on “the theory of knowledge, civics and modern world history.” But it’s not just students at his school in the Back of the Yards neighborhood who benefit. Perhaps the most important lesson Chicago’s educators have taught us is that to build a country where policy makers favor the supermajority rather than the 1 percent means a return to massive, supermajority strikes. It is only through such strikes that we can rebuild the solidarity desperately needed among workers—and between workers and the broader society. Strikes are to democracy what water is to life: not a distraction or a disturbance but the foundation.12

Correction: This post has been updated to correct a quote that was initially attributed Los Angeles Mayor Eric Garcetti during a meeting with the head of the LA teacher’s union. According to a source who was present at the meeting, it was actually said by Austin Beutner, the LA Schools superintendent.
Keep Reading
Ad Policy