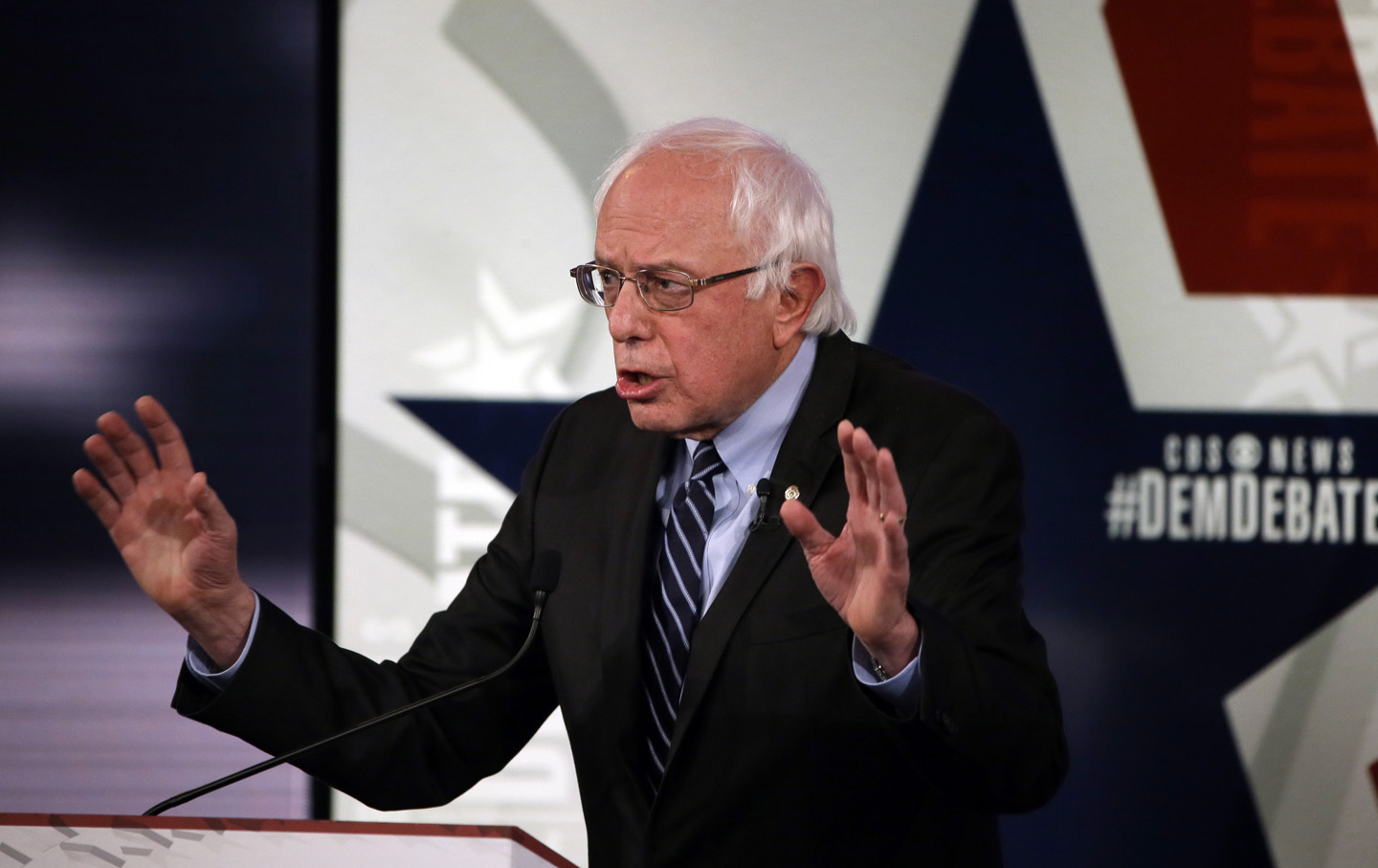 No one who has paid attention to the race for the 2016 Democratic presidential nomination is unaware that democratic socialists have won elections in Denmark. Bernie Sanders has made the point abundantly clear in interviews, speeches, and debates—to the amusement of pundits and the frustration of at least some of his supporters.

It’s not that people dislike this small Scandinavian nation. Like Hillary Clinton, most of us “love Denmark.”

After explaining in the first Democratic debate that “democratic socialism is about saying that it is immoral and wrong that the top one-tenth of 1 percent… own almost as much wealth as the bottom 90 percent,” and suggesting that taxation of some of that wealth would free the United States to provide “healthcare to all people as a right…medical and family paid leave,” Sanders said, “Those are some of the principles that I believe in, and I think we should look to countries like Denmark, like Sweden and Norway, and learn from what they have accomplished for their working people.”

It was at this point that Cooper interrupted with what has become a reasonably standard response to Sanders’s referencing of Scandinavian social democracies: “Denmark is a country that has a population of 5.6 million people. The question is really about electability here, and that’s what I’m trying to get at.”

The point is well taken. Denmark is much smaller than the United States. And, frankly, larger countries that have elected democratic socialist governments—Germany, Britain, France, Australia, Sweden—are different in their own ways from the United States.

Democratic socialists have been elected to the Senate and the House, as state legislators and as big-city mayors.

So what of “electability here”?

When Sanders delivered his much-anticipated address on democratic socialism at Georgetown University Thursday, he linked his vision to that of a repeatedly-elected Democratic president, Franklin Delano Roosevelt, who did not identify as a democratic socialist but who borrowed freely from the platforms of his Socialist Party rival, Norman Thomas. In particular, Sanders connected his contemporary vision to the one outlined by FDR in the 32nd president’s 1944 appeal for a “Second Bill of Rights” that would guarantee:

The right to a useful and remunerative job in the industries or shops or farms or mines of the nation;

The right to earn enough to provide adequate food and clothing and recreation;

The right of every farmer to raise and sell his products at a return which will give him and his family a decent living;

The right of every businessman, large and small, to trade in an atmosphere of freedom from unfair competition and domination by monopolies at home or abroad;

The right of every family to a decent home;

The right to adequate medical care and the opportunity to achieve and enjoy good health;

The right to adequate protection from the economic fears of old age, sickness, accident, and unemployment;

The right to a good education.

FDR ran for a fourth term in 1944 advocating for that program, and arguing that “We have come to a clear realization of the fact that true individual freedom cannot exist without economic security and independence. ‘Necessitous men are not free men.’ People who are hungry and out of a job are the stuff of which dictatorships are made. In our day these economic truths have become accepted as self-evident. We have accepted, so to speak, a second Bill of Rights under which a new basis of security and prosperity can be established for all—regardless of station, race, or creed.”

In his speech at Georgetown, Sanders quoted FDR’s words and declared that his democratic socialism “builds on what Franklin Delano Roosevelt said when he fought for guaranteed economic rights for all Americans. And it builds on what Martin Luther King, Jr. said in 1968 when he stated that; “This country has socialism for the rich, and rugged individualism for the poor.” It builds on the success of many other countries around the world that have done a far better job than we have in protecting the needs of their working families, the elderly, the children, the sick and the poor. Democratic socialism means that we must create an economy that works for all, not just the very wealthy.”

FDR did not identify as a democratic socialist but borrowed freely from the platform of Norman Thomas.

Sanders recalled that “almost everything (Roosevelt) proposed was called ‘socialist.’ Social Security, which transformed life for the elderly in this country was ‘socialist.’ The concept of the ‘minimum wage’ was seen as a radical intrusion into the marketplace and was described as ‘socialist.’ Unemployment insurance, abolishing child labor, the 40-hour work week, collective bargaining, strong banking regulations, deposit insurance, and job programs that put millions of people to work were all described, in one way or another, as ‘socialist.’ Yet, these programs have become the fabric of our nation and the foundation of the middle class.”

It is true that Roosevelt’s policies were decried as socialistic by the former president’s many critics. Yet, he was reelected with a 3.5 million popular-vote margin and a 432-99 advantage in the Electoral College. Roosevelt did not win on the Socialist Party line, however—he won as a Democrat. And so we still face the question that Cooper was raising about whether democratic socialists can be elected in the United States. It’s a fair one. And it has an answer: Yes.

This is a hidden—or, at the least, largely forgotten—history of electoral engagement by American democratic socialists that extends across three centuries.

Berger, a radical newspaper editor and agitator, was repeatedly reelected over the next two decades, serving some of his tenure with another Socialist Party stalwart, New York Congressman Meyer London.

When Berger represented Milwaukee in Congress, the mayors of that city were democratic socialists—Emil Seidel and Dan Hoan. And they were not alone. Democratic socialists served as the mayors of dozens of cities—from Butte, Montana, to Reading, Pennsylvania, to Flint, Michigan, and Schenectady, New York. And they did not just serve in the distant past. Bridgeport, Connecticut, had a Socialist Party mayor (Jasper McLevy) into the 1950s; Milwaukee had a Socialist Party mayor (Frank Zeidler) until 1960. In the 1990s, the mayor of Ithaca, New York, was a member of Democratic Socialists of America, a group that was co-founded and led for many years by Michael Harrington, a counselor and friend to both Robert Kennedy and Edward Kennedy. Hundreds of democratic socialists have served on city councils, and continue to serve—just this month, one of the country’s most prominent socialists, Kshama Sawant, was reelected to the Seattle city council with more than 55 percent of the vote.

In 1912, the Socialist ticket of Eugene Victor Debs and Milwaukee Mayor Seidel won more than 900,000 votes—6 percent of the national total. The Debs-Seidel ticket won no states, but actually beat the Republican ticket led by President William Howard Taft in Arizona, California, Florida, Louisiana, Mississippi, and Nevada. A dozen years later, the independent progressive ticket of Wisconsin Senator Robert M. La Follette and Montana Senator Burton K. Wheeler, which ran with the backing of the Socialist Party, won almost 5 million votes (just under 17 percent of the national total), carried the state of Wisconsin, and finished second (beating the Democrats) in 11 Western states. In New York City, an ally of La Follette, Fiorello H. La Guardia, was reelected to the US House on the Socialist line, as was Victor Berger in Wisconsin.

In 1932, Socialist presidential candidate Norman Thomas appeared on the cover of Time magazine, earned daily coverage from The New York Times and won almost 900,000 votes—gaining more than 150,000 in New York State alone. That fact did not go unnoted by the winner of the election, New York Governor Franklin Delano Roosevelt, who invited Thomas to the White House for conversations about how best to respond to the challenges posed by the Great Depression. Thomas encouraged the new president to consider programs that the Socialists had advocated: to create jobs, to make it easier to organize labor unions, to establish programs to insure social security, to end discrimination in employment and education.

Roosevelt listened, and so did others. The influence of Thomas and his brand of democratic socialism was felt in the New Deal era and for decades afterward, as democratic socialists organized great unions such as the United Auto Workers and the American Federation of State County and Municipal Employees, as they organized the 1963 March on Washington for Jobs and Freedom, as they emerged as essential figures in the struggles for civil rights, women’s rights, and LGBT rights.

Democratic socialists have won plenty of elections in the United States—and they are still winning them. But democratic socialists have also won many of the great debates in the court of public opinion—and they are still winning them. After the last of his presidential campaigns, Norman Thomas observed that both Democrats and Republicans were adopting his proposals, writing that “here in America more measures once praised or denounced as socialist have been adopted than once I should have thought possible short of a socialist victory at the polls.”

(The new edition of John Nichols’s book, The S Word: A Short History of an American Tradition… Socialism, was issued this month by Verso.)