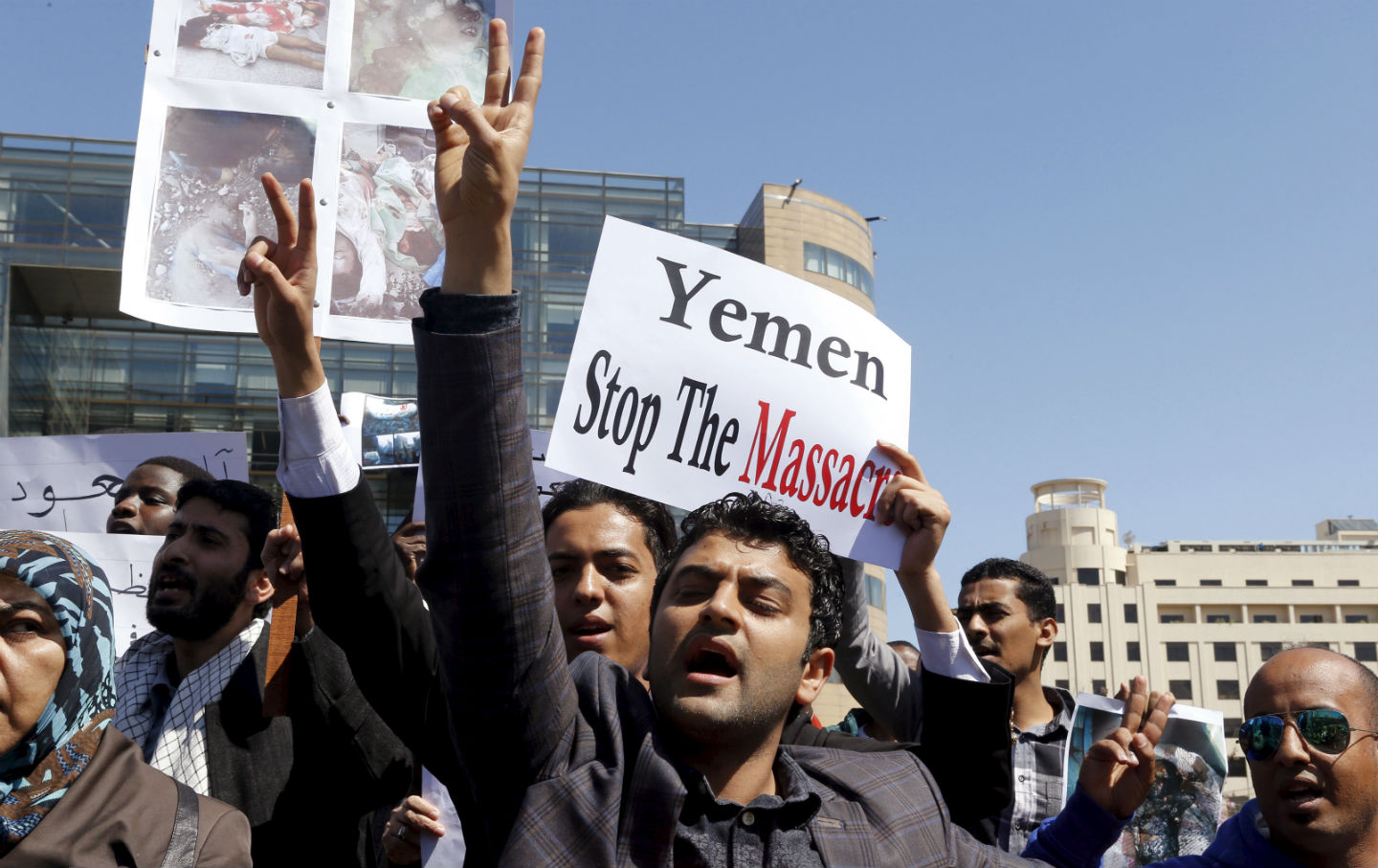 Along with civilian suffering, protests against the Saudi assault on Yemen are mounting, and with good reason. Progressives and antiwar groups in the United States, Britain, Arab countries and the rest of the world must oppose the Saudi-led attack on its impoverished neighbor. Operation Decisive Storm is, as the London-based Saudi scholar Madawi al-Rashid has written, the latest stage in an aggressive military interventionist policy in the Arabian Peninsula. It is also, as John Willis points out, a counterrevolutionary offensive.

Already protected by the colossal presence in the Persian Gulf of US air and naval installations, the oil-rich Kingdom of Saudi Arabia owns the world’s largest arsenal (on a per capita basis) of advanced American, British and German arms. It is the largest purchaser of British weapons, and a major customer for leading US military companies like Lockheed Martin, Raytheon and General Dynamics. NATO powers have for many years embraced a guns-for-oil pact with the Kingdom and fellow royal families of the Gulf Cooperation Council (GCC).

Saudi Arabia, the only modern country named for its ruling dynasty, is an absolute monarchy that is anti-democratic, illiberal and intolerant. Already by March 11 of this year, according to Amnesty International, the Kingdom had executed forty-four people, many of them foreign nationals, often by beheading, and frequently for relatively minor drug-related charges. Sometimes decapitated bodies were hung, crucifixion-style, over busy intersections. The press is heavily censored, peaceful protests are banned and rights advocates face draconian sentences. A liberal blogger, Raif Badawi, was sentenced to public flogging and remains in prison despite an international outcry. Women have the status of minors, unable to drive, travel or otherwise function as adults without the supervision of their fathers, husbands or sons. As elsewhere in the Gulf, menial jobs are done by migrant workers, who in many cases are little more than indentured laborers.

Mindful of the arms-for-oil bargain, Western powers overlook deplorable human rights violations for the sake of a more than seventy-year-old petro-security complex. In January President Obama led a large, high-powered bipartisan delegation of thirty American politicians to Riyadh to express condolences over the passing of the late King Abdullah and swear allegiance to the new King Salman. The president and other members of the delegation—which included former Secretaries of State James Baker and Condoleezza Rice, Senators John McCain and Mark Warner, Secretary of State John Kerry, National Security Adviser Susan Rice and CIA director John Brennan—had all visited King Abdullah and members of his government many times before. Other world leaders also paid their respects.

It is customary for the United States, other North Atlantic powers and, through them, the United Nations Security Council to defer to Saudi concerns in Yemen. American drone assassinations, in particular, have been rationalized in terms of ensuring Saudi security. It follows that the United States is augmenting the current Saudi-led campaign with logistical and intelligence support, including live surveillance feeds from unmanned drones.

Saudi Arabia has meddled incessantly in Yemeni politics since at least the 1960s. All the Gulf monarchies opposed the revolutionary movement then against British colonialism and the sultans it supported in what was then South Yemen. The Saudis financially backed restoration of the Zaydi imam, who had been overthrown in 1962 by republican officers backed by forces from Gamal Abdel Nasser’s Egypt. When revolutionaries came to power in what became the People’s Democratic Republic in the South and secular republican officers prevailed in the North, the Saudi government and various princes paid stipends to friendly clients in both parts of Yemen as a way of influencing domestic politics. The radically anti-Socialist Islamist party known as Islah was founded in North Yemen with Saudi encouragement by two of the country’s most prominent conservatives, both known for close ties with the Saudi Kingdom: the fanatical Salafi preacher Abd al-Majid al-Zindani and the late sheikh of the Hashid tribal confederation and long-time Speaker of Parliament, Abdullah bin Hussein al-Ahmar.

Saudi Arabia opposed Yemeni unification in 1990, cheered on Southern secessionists during the 1994 civil war and funded Salafi mosques and schools throughout the country. In fact, it was the ostentation of a large Saudi-funded Salafi institute in the town of Dammaj in Saada province that sparked the local Zaydi revivalist movement initially called the “Believing Youth,” but now known as Ansar Allah, or simply the Houthis. The 2004 arrest by then-President Ali Abdullah Saleh’s men of the movement’s founder, Hussein Badr al-Din al-Houthi, and hundreds of his followers who were protesting in Sana sparked the first of six wars between the Saleh regime and Houthis in their Saada homeland. In 2009, Saudi warplanes targeted Houthi strongholds; according to Human Rights Watch, there is “credible evidence” the Saudis used cluster bombs.

The uprisings that began in the winter of 2010-11 in Tunisia and Egypt caused real panic among Gulf royalty. Even more terrifying were the protest demonstrations in Yemen and Bahrain. Saudi tanks easily crushed the 2011 insurrection of the defenseless Shi’a majority against the Sunni al-Khalifa rulers in tiny Bahrain.

Yemen, with a population of about 26 million spread across a vast territory, is a different story. There, the “peaceful youth” movement, comprising college students, Houthi sympathizers, Islah activists, the Southern Hirak and rural tribesmen (who for a long time threw down their arms), persisted in all the major cities and many towns for months on end. Military intervention was not a viable option.

Instead, the GCC negotiated with its erstwhile client Ali Abdullah Saleh to surrender power to his lackluster vice president, Abdu Rabbu Mansour Hadi, in exchange for a sweet deal that gave Saleh immunity from prosecution for his brutality against peaceful protesters, corruption, nepotism and other crimes. Moreover, it left him at large as leader of his General People’s Congress (GPC), which in turn retained its parliamentary majority. The so-called GCC Initiative, backed by Western powers, specified a hastily arranged one-candidate referendum in 2012 that installed Hadi for a two-year term as transitional president. The GCC, UN special envoy Jamal Benomar and Western donors took it upon themselves to fund, orchestrate and advise a National Dialogue Conference of about 565 delegates, assigned to eleven working groups on a range of issues.

The National Dialogue Conference was a good idea, with the potential to negotiate a consensus among diverse political parties and regional interests while delivering on at least some of the social justice demands of the “peaceful youth.” The objectives of the GCC Initiative, by contrast, were to quell mass popular protests by ushering Saleh from the presidential palace without implementing genuine regime change by holding competitive elections for either the presidency or parliament. The transition period lingered past Hadi’s two-year term and the deadline for completion of the Dialogue, whose members listened to lectures by international experts in the luxury Moevenpick Hotel in the Sana suburbs. Increasingly, Yemenis North and South derided Benomar and Hadi as ineffectual custodians of an inconclusive process. The Southern movement—the Hirak—grew increasingly impatient. The weak economy contracted; abject poverty spread. Saleh deployed billions in ill-gotten gains—as well as some brigades still on his payroll—to disrupt progress. American drone surveillance, and occasional strikes, continued to terrorize certain communities and delegitimize the Hadi administration.

The World Bank, also a party to the GCC Initiative, supplied the straw that broke the camel’s back in August 2014 by pushing Hadi to suspend fuel subsidies vital to farming and micro-transport, two key sources of income for Yemeni households. In response to the imposition of this standard prescription for flailing economies amid circumstances of economic and political collapse, the Houthis staged bread-and-butter protests. These were met with brute force.

As the heretofore ragtag Houthi militia began its march south from Saada on the Saudi border, it encountered resistance only in Amran, seat of the al-Ahmar sheikhs of the Hashid confederation. Houthi forces entered Sana without much bloodshed, as troops ostensibly under Hadi’s command stepped aside and/or soldiers collecting salaries from Saleh paved the way. Hadi’s government had little choice but to resign and escape to Aden, the old Southern capital and his home turf. With the final unraveling of the GCC Initiative, Saudi Arabia’s new king determined to go on the offensive.

Protesting the violence unleashed by Operation Decisive Storm should in no way imply support for the Houthis over other contenders for power in Sana, Aden or the rest of the country. In fact, the Houthis have tortured civilians to crack down on dissent, which is breeding enemies in Sana, and especially beyond the Zaydi heartland. They face strong popular resistance in Ta’iz and especially in Aden and the rest of the South. Rather, antiwar protesters are rallying against the aggressive military intervention for reasons that do not require deep comprehension of the differences between or among Houthis, Hashid, Hadi and Hirak. Here are the basic principles:

Saudi Arabia is an oppressive, reactionary regime historically resistant to progressive movements in Yemen and elsewhere. It is also a linchpin in the US-NATO military industrial complex and the endless war on terror.

The pretext of the “legitimacy” of the GCC-anointed administration is a figment of hegemonic imagination. Public opinion inside Yemen is kaleidoscopic and mercurial, but few accept this excuse for intervention.

The Sunni versus Shi’a sectarian narrative misrepresents Yemenis’ multiple proclivities for partisan, regional and class-based leadership. If anything, the escalating war pits the billionaire royal elites of the Gulf against the downtrodden of the Peninsula. Bombardments are both terrifying and deadly. Attacks on al-Mazraq camp for internally displaced persons in Hajjah governorate, a dairy factory near Hodeida and other locations have left dozens of non-combatants dead, according to human rights groups. The UN’s High Commissioner for Human Rights, Zeid Ra’ad al-Hussein, says “the country seems to be on the verge of total collapse.”

Saudi (and Saudi-American) military intervention in Yemen has never worked in the past (see also the American wars in Iraq and Afghanistan). Peace and social justice activists demand unconditional, neutral cessation of hostilities. Let’s take a stand against this war of aggression and American complicity.