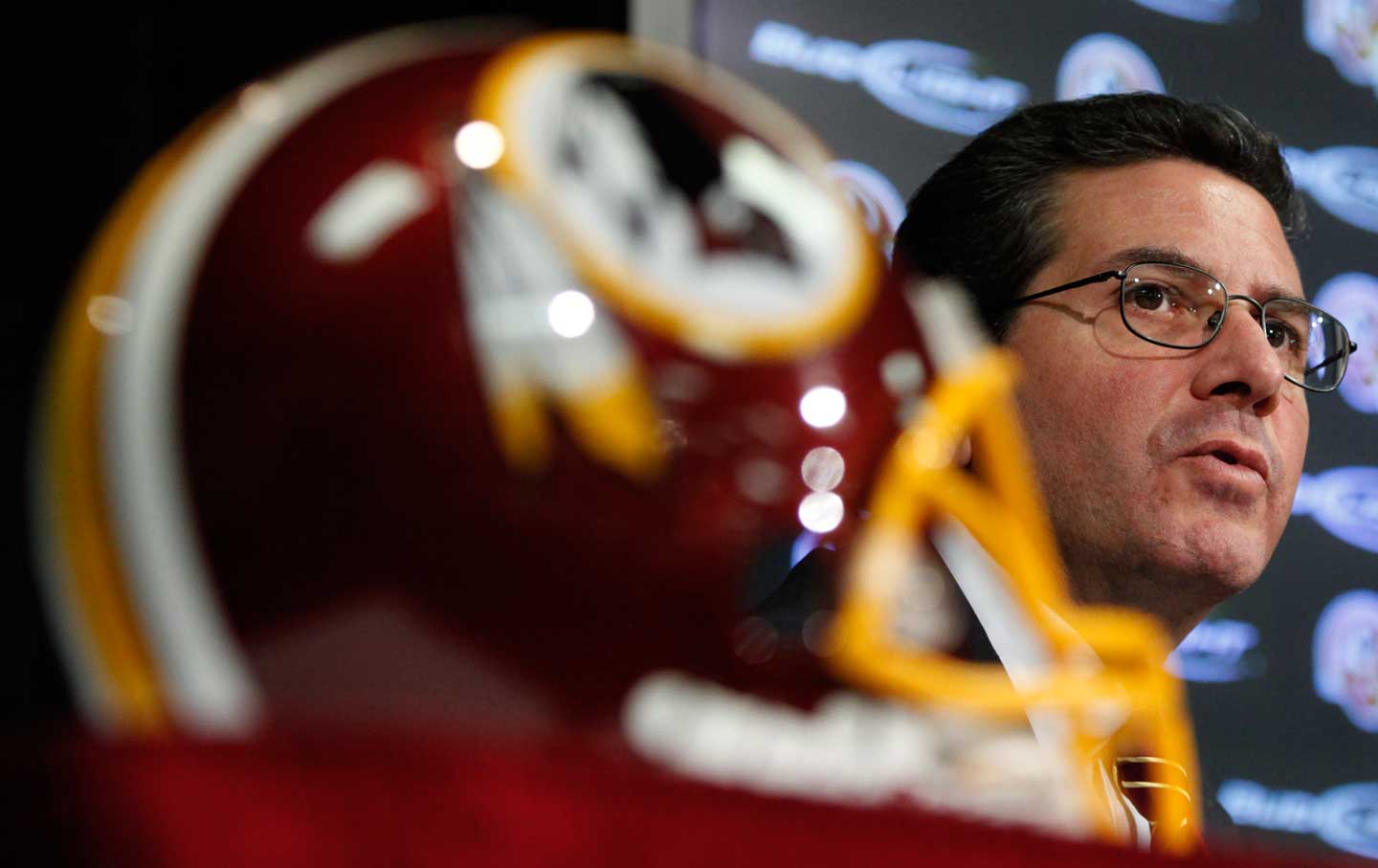 This NFL season has blazed new political trails as players have used their platform to stand up to racism in the face of a ferocious backlash. It has truly been a season of firsts. But there is another “first” on the immediate horizon that speaks to the league’s baldly reactionary history in regards to race.

The NFL—for all their corporate rhetoric about being something that “brings the country together”—of course has a team named after a Native American racial slur in the nation’s capital. That’s not news. What is news is that on Thanksgiving, for the first time in league history, this team in Washington will be playing host. That means as we finish our food, slip into sweatpants, and to gather around the television to watch NFL football, a tradition only slightly less ubiquitous than pumpkin pie, the R*dskins slur— a name that exists only because of genocide and displacement—will have center stage.

Not unlike Houston Texans owner Bob McNair saying that “the inmates are running the prison” as NFL players were speaking about criminal-justice reform, this raises irony to the level of obscenity, especially as owners, and their pizza-purveying sponsors, are trying to convince players and the public that they are enlightened about these issues. It’s as if NFL owners, by having Washington host this game, are having their own private joke at the expense of the players, fans, and commentators who care about these issues. All the team would say to us at The Nation was, “The [R*dskins] are excited to host the first ever Thanksgiving game in Washington. We appreciate our fans spending their holiday with us, and we want to create new traditions and special experiences that [R*dskins] fans and families are sure to remember.”

To get an actual comment, I reached out to Ray Halbritter, Oneida Nation representative and spokesman for the Change the Mascot Campaign. He said, “Thanksgiving has long been a difficult day for many Native Americans, because the holiday story promoted in popular culture often omits the oppression, violence, and bloodshed that our people faced when Europeans migrated to this continent. Using the holiday to additionally promote the Washington team’s derogatory name further marginalizes Native Americans—and tells people across the country that on this holiday it is perfectly acceptable to promote a painful racial slur. At a time when our political debate is so polarized and filled with invective, we should be able to agree that the NFL should not promoting a racial slur.”

The fact that this team is owned by Dan Snyder, who blocked with Dallas Cowboys owner Jerry Jones in calls to crack down on players protesting racism during the anthem, and gave over a million dollars to the Trump inaugural committee, should not be lost in this discussion. Snyder has pledged to never change the team name with a belligerence that mirrors his man in the White House. Snyder’s refusal to meet with native leaders and his ignoring the laundry list of tribal governments and organizations who have called for it to change is also from the Trumpian textbook: creating a billionaire’s echo chamber that permits only ideas that fluff the master. The same mendacious mentality that allows Snyder to deny that “redskin” is a racial slur is also the mindset that allowed him to say in an owners’ meeting that “96 percent” of people oppose the player protests.

I spoke to Suzan Shown Harjo, the Cheyenne and Hodulgee Muscogee activist and president of the Morningstar Institute, who has led this fight to end racist mascotry for decades. She told me, “The owner of the Washington NFL franchise is such a hypocrite, pretending to take a knee with players regarding racism, while requiring his employees to commit acts of racism, stereotyping, and cultural appropriation against Native Peoples. The idea of him ‘hosting’ a Thanksgiving game is quite fitting, actually. It celebrates what the name, imagery, and behaviors associated with the team he owns also celebrate in history—a time when European and then American men skinned Native men, women, and children and produced them as ‘proof of Indian kill’ in order to collect bounties issued first by colonies and companies and then by states and territories. This grotesque practice still was in full swing when my grandmother was growing up, so I dispute anyone’s argument that this was too long ago to be an ongoing injury or threat to my generation or the later ones. Slavery in the Americas spanned about the same time, yet few could honestly deny its present and lasting trauma. Hypocrisy, thy name is Snyder.”

In this season of racial dissent and dialogue over racism, the Washington team name has been erased from the discussion. Perhaps this Thanksgiving we can center it exactly where it belongs, and understand that a league that celebrates racial slurs can never be an engine for racial justice.