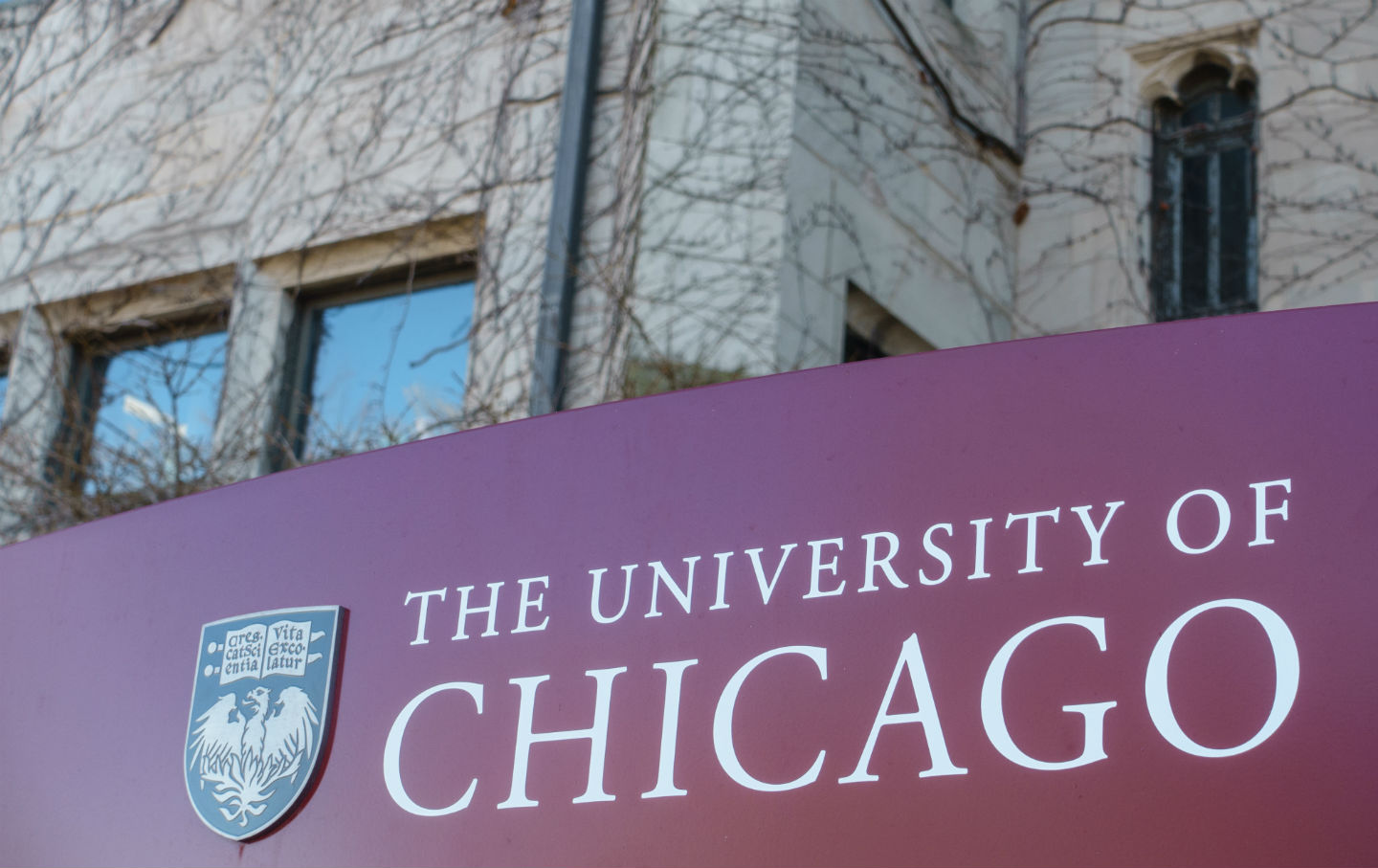 An American student’s bright college years are now typically bookended by two grim milestones: taking out your first student loan on an eye-popping tuition bill, and graduating into a labor market that tracks many young workers into a lifetime of economic insecurity. In between, students face massive budget cuts that further undermine their academic prospects. For a group of University of Chicago seniors, pre-graduation jitters turned into righteous indignation last week with a sit-in protest showing that their generation is sick of seeing their higher education devalued by broken promises.

Dressed in symbolic graduation gowns, the #NoCutsUChi activists occupied the admissions office to protest not only budget cuts but also the university’s entire development agenda. Their statement demanded a budget that comprehensively meets students’ social needs and academic aspirations, while addressing racial and economic inequity in local communities: “These cuts…demonstrate that the university prioritizes improving its image over the quality of life of the people who work and study here—the faculty, students, and workers, who make this university what it is.”

The anti-austerity protests came alongside another direct action by students: occupying a campus building to demand that the University establish a Level 1 trauma care center—responding to a desperate medical need in local communities devastated by poverty and violence.

Both these protests came in the lead-up to Alumni Weekend, which includes celebrations of the legacy of students who came of age during a time when the campus was alight with protesting youth.

Today, a new generation is rising up against an increasingly commercialized education system. Maybe the student insurrectionists of the class of 1970 will be proud.

Altogether, the planned cuts, reported in Crains Chicago Business, will result in 5-6 percent cuts to non-academic programs and a 2 percent cut across academic departments. Announced on the heels of a downgraded rating on the university’s swelling debt by Moody’s, the administration’s “cost containment measures” are coupled with plans to add fancy new features to the University’s academic and lifestyle offerings, including the construction of a new residence hall and engineering institute—aimed at making the university more “competitive.” Over the next few years, the university is planning a $1.5 billion remodeling, financed largely through institutional debt, real estate sales and budget cuts. The plans reflect a nationwide pattern of the financialization of higher education: administrations compete for prestige and invest in lavish high-rises while cash-strapped students sink into debt and eat out of food pantries.

The cost of an undergraduate year at the University of Chicago now exceeds $60,000. Though the university recently announced an initiative to phase out student loans and move toward expanding need-based financial aid, the plans will be phased in over several years, and won’t bring down the crushing overall cost of tuition.

For the Class of 2015 protesters, the shortfall isn’t just about preserving the university’s academic integrity for future students but protecting the core values of higher education. In a series of declarations from individuals participating in the sit-in, students expressed frustration that the university was focusing its resources on capital investments without investing in things as basic as campus jobs for low-income students. Senior Julianna Estall stated, “I’m sitting in because I needed my work-study job for groceries and rent.”

“I am sitting in because I do not believe in an administration that lines its pockets with the paychecks of the working class,” declared Simone Bonaparte.

Protesters also pointed out that while their services and jobs were on the chopping block, the salaries of top administrators remained unscathed, despite dramatic pay increases in recent years.

Student organizer Spencer McAvoy says via e-mail that students are demanding detailed information on exactly which programs and services will be cut: “at this point we know for sure… that they have definite plans on which things they want to cut, but have not been willing to share any concrete information about this…. the administration has been highly secretive about the budget, which shows its lack of transparency and accountability to its faculty, staff, and students.”

So the cash-strapped students are demanding answers on why they’re being hit with an austerity budget while the university plows funds into real estate and launches a bid for the Obama Presidential Library.

The protests tap into rising resentment among current and former students of public and private institutions, as many now face financial chaos in their post-college years. While the Chicago students sat in, a nationwide movement against the student debt system ramped up: the Debt Collective campaign is demanding that the Department of Education step in to cancel unfair loans. Nationwide, student debt, typically running more than $27,000 per borrower, is linked to trends of long-term economic insecurity, and mental health problems—all growing burdens today’s graduates take on along with their diplomas.

Following the sit-in, the university remained tight-lipped about the budget plans: a spokesperson acknowledged to DNAInfo the recently revealed plans for funding reductions, but declined to elaborate further on the university’s financial agenda. The administration pushed out the protesters after several hours, reportedly threatening them with disciplinary measures that could interfere with graduation. Authorities also caused rancor when university police sent in firefighters to aggressively oust the trauma center protesters, breaking a window in the process.

After the action, the sit-in seniors wrote to their soon-to-be-fellow alumni: “We know that a university that is increasingly run like a corporation, that is more accountable to its Moody’s rating than to its faculty, students, and staff, is in none of our interests.”

As the seniors left the protest site on Friday, their demands remained unmet. But although their class will soon walk on graduation day, coming up behind them will be future seniors, now poised to carry on what’s fast becoming a new tradition of radicalism on campus.