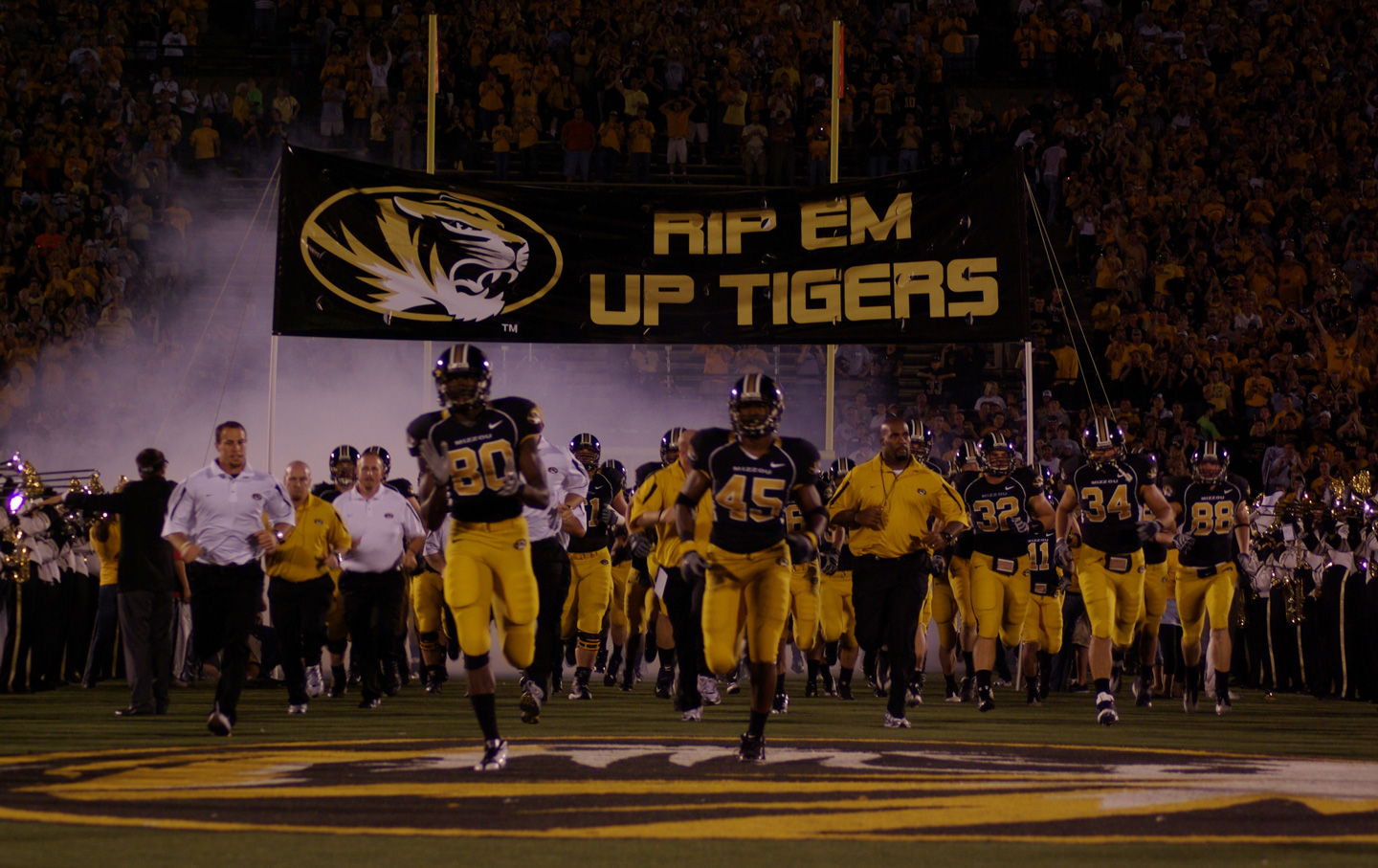 EDITOR’S NOTE: UPDATE, 11/9: University of Missouri President Tim Wolfe resigned Monday morning at a board of curators meeting in the wake of campus protests calling for him to step down.

On Saturday night, the black players on the University of Missouri’s football team—a team in the national-title hunt just two years ago—went on strike against racism. The strike has the potential to cost the Southeastern Conference football program millions of dollars, because the conditions for black students on campus have become simply unendurable.

Their demand is simple: They want school President Tim Wolfe to resign because of his inability to address a series of racist incidents on campus. So on Saturday night, as America gathered to watch the racist Donald Trump get free airtime on NBC, roughly 30 black Mizzou football players, some with their arms interlocked, sent out the following message: “The athletes of color on the University of Missouri football team truly believe ‘injustice Anywhere is a threat to Justice Everywhere’ We will no longer participate in any football related activities until President Tim Wolfe resigns or is removed due to his negligence toward marginalized students’ experiences. WE ARE UNITED!!!!!” As one player who asked not to be named told me, “We see what’s happening here. We felt stupid saying and doing nothing while all this was going on around us. We want to be leaders on this because it affects us too.”

We’re black. Black is powerful. Our struggle may look different, but we are all #ConcernedStudent1950 pic.twitter.com/obCjSWCFVY

The power of this action cannot be overstated. These football players have forced people to educate themselves about a campus environment that has been on fire for months, if not years. (Here is a timeline.) This year activists on campus have protested over the rights of adjunct professors, the cutting of healthcare benefits, the rolling back reproductive rights for women, and a hostile climate for students of color. And a recent series of ugly racist incidents led the football players to take collective action. For a team that two years ago stood in solidarity with teammate Michael Sam when he told the world he was gay, they again made the lionhearted decision to rise to the moment.

I spoke with Dr. Rebecca Martinez, an assistant professor in women’s and gender studies. She said, “The football program here at Mizzou is a central part of the university culture. The collective athletes of color who made the decision to go on strike do so with conviction for social justice for marginalized students on our campus. Given the importance of football here, they are taking a significant stand. They are not thinking of themselves, their play, and their careers at this moment. It is not an easy thing to do on a football-centered campus like ours, especially around the issue of racism. There will likely be no shortage of those who put football above humanity and who are convinced that racism doesn’t live here. And they are wrong.”

The roots of racism at Mizzou run deep and reach back a hell of lot farther than the last year. But this wave of struggle was sparked by what has been seen as the absence of response from the administration over the killing of Michael Brown by police in Ferguson, Missouri, located just two hours from campus. As grad student Jonathan Butler said to The Washington Post, “There was national coverage, so for the school to not cover that or really address that, and we are only two hours away, I think was a huge mistake on their part and contributed to the current cultural environment that we have. It just shows that there are racially motivated things—murders, assaults, other things—that happen and we are just going to sweep them under the rug.”

Students collectively gathered in great numbers on campus grounds to ask why black lives didn’t seem to matter to the administration. These demands were met with apathy by Tim Wolfe and a series of incidents of racial harassment of black students. It reached a breaking point on October 24 when a swastika was smeared in feces on the wall of a dorm bathroom. For Butler, that was the last straw, and he announced on November 2 that he was going on a hunger strike. Butler’s demand was that Wolfe steps down. He said, “I already feel like campus is an unlivable space it’s worth sacrificing something of this grave amount, because I’m already not wanted here. I’m already not treated like I’m a human.”

Now the football players have taken up that demand—and in our sports-obsessed culture, that matters. As Dr. Martinez said to me, “It’s sad that a student starving himself doesn’t get attention like a football strike does. But they know their power and am proud of them for using it. It’s not easy to stand up, especially here.”

But the strike does more than raise the visibility of the struggle. It has the very real potential of actually forcing the removal of Tim Wolfe from his position and getting someone in the seat of authority capable of addressing this poisonous campus climate. That’s because the Missouri football players—like all big-time college football players—hold a deep social power. The student body is just 7 percent black, yet 58 of the school’s 84 scholarship football players are African-American. There is no football team without black labor. That means there aren’t million-dollar coaching salaries without black labor. There isn’t a nucleus of campus social life without black labor. There isn’t the weekly economic boon to Columbia, Missouri, bringing in millions in revenue to hotels, restaurants, and other assorted businesses without black labor. The power brokers of Columbia need these games to be played. Yet if the young black men and those willing to stand with them—and there are white teammates publicly standing with them—aren’t happy with the grind of unpaid labor on a campus openly hostile to black students, they can take it it all down, just by putting down their helmets, hanging up their spikes, and folding their arms.

If Wolfe goes, it will show how university power really works in a country where football coaches are often the most highly paid people on campus and universities are like a company town whose primary business is football. The actions of these players is best understood as a rumble of the sleeping giant. We have felt similar stirrings in recent years when Northwestern football players pushed for union recognition and the players at Grambling struck against their unsafe working conditions. When players take these kinds of direct actions, they show what they really are: a labor force. And like all labor forces they are concerned with issues like union rights, safe working conditions, and some form of redress if they are in a hostile work environment. Based upon what’s been happening at MU, it is certainly that.

For Missouri head coach Gary Pinkel, who makes $4 million a year, and his staff, they apparently decided immediately to throw their support behind the players and the athletic department released a statement saying, “We all must come together with leaders from across our campus to tackle these challenging issues and we support our student-athletes right to do so.”

The Mizzou Family stands as one. We are united. We are behind our players. #ConcernedStudent1950 GP pic.twitter.com/fMHbPPTTKl

Tim Wolfe is on the clock and it is difficult to imagine him surviving this. It recalls the comments of former Ohio State President Gordon Gee, who said when asked whether he would fire head football coach Jim Tressel, “I just hope he doesn’t fire me.” But make no mistake, if “Pinkel fires Wolfe,” so to speak, it will be because his players made their coach choose a side—risking their scholarships and security to do so.

Their response, and the response of so many at Mizzou, should give hope to everyone disgusted by the racism flaring up on campuses around the country. I spoke to Missouri associate professor Sam Cohen who said to me, “I have a student in class right now who is part of [the anti-racist struggle on campus], and so I’ve seen the effects this climate and this struggle can have, and I’ve also seen the fierceness with which these students have responded. There’s a sense here that the Missouri community as a whole—students, staff, and faculty—aren’t going to wait for the men at the top to lead and are instead asserting their right to protest. The bravery and intelligence of our students is an inspiration to all of us here: if they can stand up for what they believe, we all can.… The kids are all right.… I’m not a big fan of football here, but I have just become a big fan of those players.”

He’s not alone. Give the last word to player Russell Hansborough, who took to social media and said, “Never thought I would be in place or time like this to actually make a difference.”