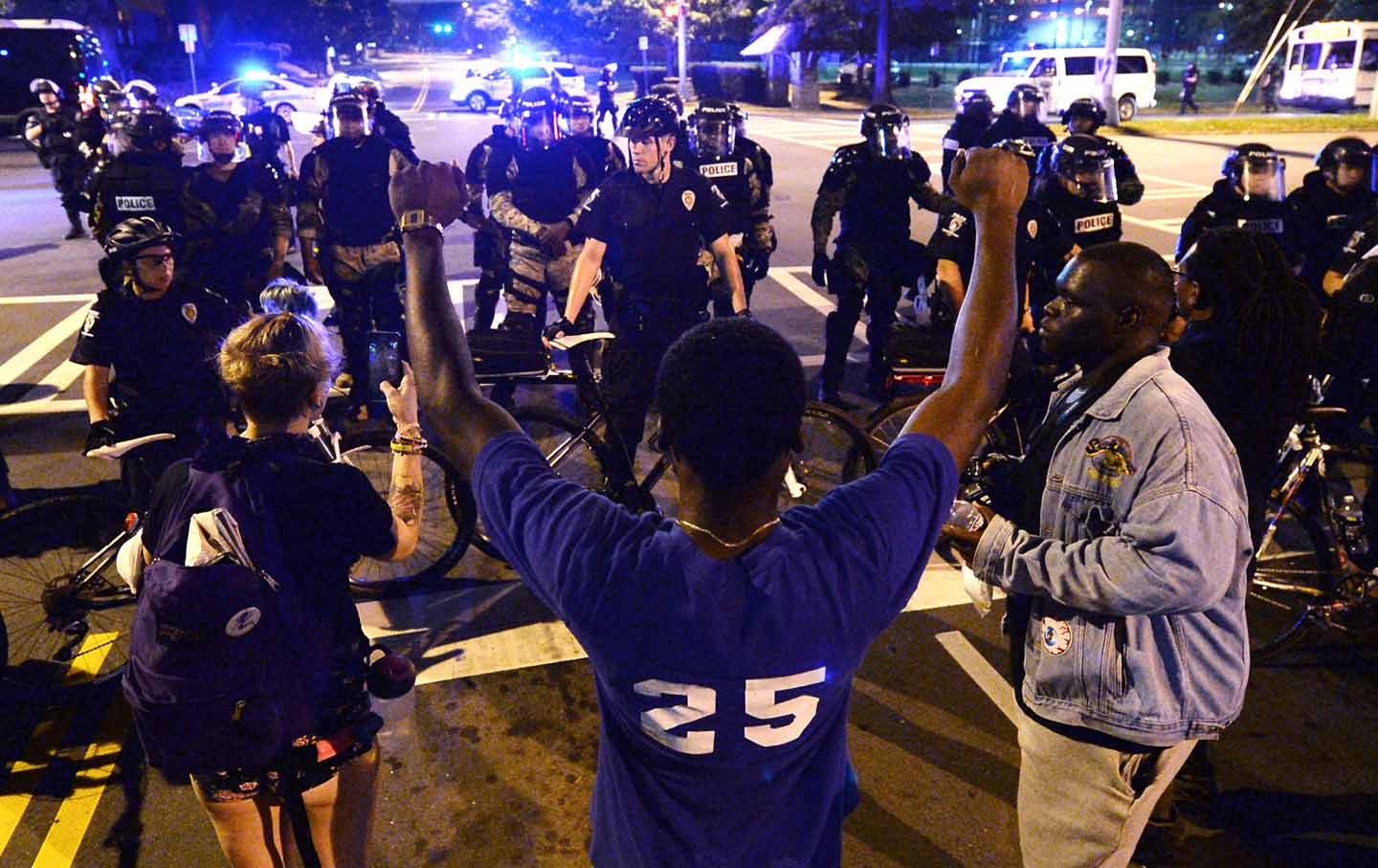 A protester raising his fists as he faces police during protests in Charlotte, North Carolina on September 25, 2016 following the police killing of Keith Lamont Scott. (AP Photo / Jeff Siner)

Here’s an illuminating pair of stories about race, planning, economics, and destiny in Charlotte.

A boy grew up in his grandmother’s house in Lincoln Heights, a black neighborhood just north of downtown. When his grandmother bought the house in 1961, it was a stable community with longtime homeowners and locally owned businesses. Later in the 1960s, two crisscrossing interstates cut Lincoln Heights off from its neighbors. Homeowners moved out; businesses dried up. As a teenager in the ’80s, the boy couldn’t even get a pizza delivered to the house. “The people in my community were not invisible,” Anthony Foxx would say years later. “It’s just that at a certain point in our history, they didn’t matter.”

A girl moved with her family to Belmont, a neighborhood just east of downtown, a half-century ago, when she was 5. She made the majority-black community her home, serving for years on the board of its neighborhood association, even as it devolved into one of the city’s most violent and drug-infested areas in the late ’80s and early ’90s. She’s still there, renting a rickety one-story house for $465 per month, but in the last few years new people and new dollars have been pouring into her once-desolate corner of the city. She’s thrilled by the sudden prosperity, though it carries a new threat. She’s worried about a steep rent hike when her lease comes up for renewal in May. “I live between two $300,000 houses now,” says Brenda Erwin. “It’s kind of pushing people out, ’cause the majority of the people I grew up with don’t make that kind of money.”

Black as We Wanna Be

Anthony Foxx and Brenda Erwin lead very different lives from each other today. Foxx, 45, is the US secretary of transportation, a native Charlottean who just a few months ago launched a nationwide speaking tour to explain how the highway planning of the past still disrupts the lives of poor people and people of color to this day. Erwin, 55, just hopes her landlord won’t price her out of her home. But between them, their pasts encompass much of the social and economic history of modern-day Charlotte, a gleaming Southern city and financial dynamo with no significant history of civic disruption—until last week, when the police shooting of 43-year-old Keith Lamont Scott ignited massive demonstrations and city-center rioting that left another man shot dead and numerous businesses vandalized and looted.

The violence came as a profound shock to a city whose government and business leaders pride themselves on what they call “the Charlotte way”—a legacy of amicable cooperation and shared solutions to civic problems. Charlotte’s larger neighbor and rival, Atlanta, was dubbed the “city too busy to hate” in the 1960s, but the label has applied more to Charlotte in the last two decades. It’s home to the nation’s second-largest financial-services sector, behind only New York City. Its population has nearly doubled since 1990, bringing about its status as the nation’s 17th-most populous city. In the last decade, the city has built new museums, won the NASCAR Hall of Fame, and constructed a light-rail line that’s transformed a dismal area of warehouses and abandoned textile factories into a hip neighborhood called South End, filled with craft breweries and townhome complexes.

Yet even as the city center has flourished, pockets of the city remain as isolated and bereft as before—and the contrast between the glittering downtown and neglected neighborhoods on the city’s west and east sides helped drive protesters’ frustration last week. “For the people we serve,” the pastor of an east-side black Baptist church told the Associated Press, “the Queen City is only the Queen City if you get on the train and ride into the glimmering, crystal core.”

A much-discussed 2014 study by Harvard economists Raj Chetty and Nathaniel Hendren ranked Charlotte last among 50 large American cities for economic mobility. The study showed, among other things, that children born into the bottom fifth of household incomes in Charlotte have only a 4.4 percent chance of rising to the top fifth at some point in their lives.

The divide is “a maddening paradox,” says local historian Tom Hanchett, author of Sorting Out the New South City: Race, Class, and Urban Development in Charlotte, 1875-1975. “Here, there is indisputably a rising tide as strong as, maybe even stronger than, in any place in America. Nevertheless, there are chunks of the population that are not feeling that lift.”

The reasons for the divide are complex and, among Southern cities, not peculiar to Charlotte. Atlanta, Memphis, and Birmingham, among others, face many of the same issues. But they’ve taken a particular shape here, and they largely boil down to the inequity and immobility of black Charlotte springing not from coincidence but design and planning—of our highways, our schools, and, lately, our gentrifying neighborhoods.

Take the once-established black neighborhood called Brooklyn, once the hub of black cultural life in Charlotte, was wiped out of the city center through urban-renewal projects in the ’60s and ’70s. Those projects included the construction of Interstate 277, which loops around the downtown area and which protesters last week briefly shut down by occupying the lanes. Land acquisition—seizure, really—forced hundreds of residents in Brooklyn and other black neighborhoods to the west side, a part of town that Harvey Gantt, Charlotte’s first black mayor in the ’80s, recently referred to as “the catchment area for people displaced by urban renewal.”

Another highway project, the Brookshire Freeway—named after the city’s mayor for most of the ’60s—sliced between two west-side black neighborhoods, McCrorey Heights and Biddleville, home to 149-year-old Johnson C. Smith University, a historic black college. The highways restricted business growth in those neighborhoods as the rest of the city grew, and the west side remains Charlotte’s poorest and blackest quarter.

With the city chopped up along racial lines, the courts then choked off educational opportunity for those on the wrong side of the highway. Charlotte’s public-school system was once seen as one of the country’s best examples of successful integration through busing, approved in a landmark 1971 US Supreme Court decision that paved the way for busing as a tool for desegregation throughout the United States. But 28 years after that decision, a federal judge ordered the busing plan stopped, ruling that the systemic discrimination that made it necessary no longer existed.

Now segregation is back in force, not mandated by policy but enabled by economics. The federal-court ruling reinstituted neighborhood schools, which has concentrated school resources in affluent and white areas and drained them away from the poor parts of town where black and Latino people live. The “achievement gap” between those groups has risen significantly since 1999, and today, in half of Charlotte-Mecklenburg Schools’ 170 campuses, at least 80 percent of the student body belongs to one race.

The recession worsened the impact of this segregation. The city’s real-estate market slumped, as it did throughout the country, but the recovery may create a longer-term problem. Starting around 2012, housing markets exploded again, with more than 25,000 units under construction or planned at the beginning of 2016, driven by the demand of young, affluent professionals flooding into the city.

The demand has, of course, driven up prices, forced low-income renters to relocate, and exposed a desperate lack of affordable housing in Charlotte. From 2000 to 2013, the number of homes that extremely low-income renters (households earning no more than $19,550 a year for a family of four) could afford in Mecklenburg County shrank from 32 per 100 renters to 15, according to an Urban Institute report in June 2015. The average monthly rent for an apartment in Charlotte in May 2011 was $847; in August 2016, it was $1,366, a 57 percent increase. Charlotte’s real-estate market gains between 200 and 300 affordable units per year, according to Pamela Wideman of the city’s Neighborhood and Business Services office, but “There’s a need for 34,000.”

It’s not that civic and business leaders don’t know about these problems. After the Harvard study on economic mobility, the city and county formed a task force to study them and recommend solutions. But its work has been as slow and frustrating as that of any civic task force; it has yet to settle on recommendations, much less induce officials to act. The city has finished the first section of a streetcar line meant, eventually, to link the east and west sides to Uptown, improving mobility for the poor and spurring business growth in their neighborhoods. But the project depends largely on federal transportation funding that might not materialize, and even if it does, the project’s second phase isn’t expected to open until 2019.

While Charlotteans wait, the prospect of more unrest remains, along with the conditions that animate it. “This feeling among many people that the system is out to get them is rising because the reality of this change in our city is rising, too,” says Hanchett, the historian.

Hanchett added that if all you know of the Queen City is the shine of the bank towers in Uptown and the new, mammoth apartment complexes of South End, “it’s really easy to be disconnected.” Last week, a lot of Charlotteans learned the hard way just how disconnected they’d been.