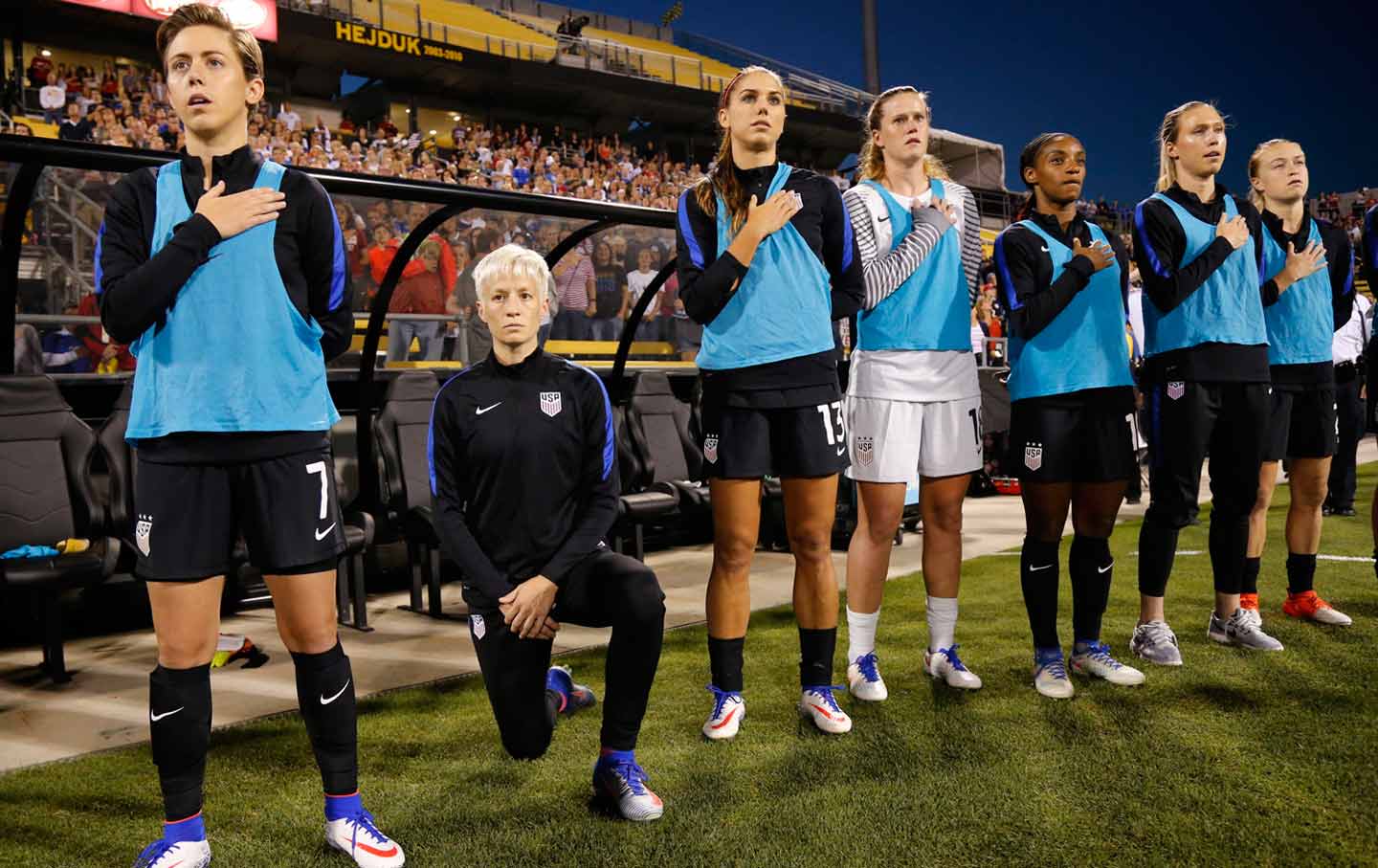 Megan Rapinoe of the US Women's National Team kneels during the national anthem before a September 15, 2016, match against Thailand in Columbus, Ohio. (The Columbus Dispatch via AP Photo / Kyle Robertson)

Do you want to make 1968 Olympic medalist John Carlos angry? Describe the iconic black-gloved fist that he pumped to the heavens as a “Black Power salute.” As he has explained to me often, “Black Power is a beautiful thing. But in 1968, raising your fist meant ‘power to the people.’ I wanted my fist to represent power to all oppressed people on the earth. I think the media has called it ‘Black Power’ because then the gesture becomes something that is just for black people and it segregates the message and the message is that we need to come together to rise up.”

Another way to upset John Carlos is to ignore the role of his dear friend the late silver-medalist Peter Norman in the protest. The white Australian did not raise a fist, but he stood with Carlos and Smith, wearing a button that read “Olympic Project for Human Rights.” Carlos says, “They write Peter out on purpose so white athletes don’t have him as a hero or an example.”

I thought about this when assessing the lack of white, male professional participation in Colin Kaepernick’s anthem protests against police violence. These athletic protests are going viral, yet while white women in the WNBA and white high-school football players and volleyball players have proudly joined their brown and black teammates, no white, male professional athlete has taken a knee or raised a fist as of this writing.

The opposition to Kaepernick’s protest—from the police unions to Beltway pundits to an online army of bigots—wants to ensure that this protest against police violence stays as segregated as possible. If high-profile white NFL or Major League Baseball players start to kneel in solidarity with the idea that Black Lives Matter, then the law-and-order crowd loses racism as the most effective tool in their kit to keep this movement quarantined.

But people should not confuse the inaction of white athletes with an absence of thought about what it means when people on your team, people you call “family,” are in pain. This past week there have been several comments that show that a small layer of white athletes are truly reckoning with what this movement means and how they can support it. Here are three notable statements.

Oakland A’s pitcher Sean Dolittle spoke to Doug Glanville of ESPN on the absence of activism in Major League Baseball and said:

As far as “I Can’t Breathe” or “Black Lives Matter” or the Kaepernick anthem demonstration, I feel uncomfortable speaking to that. I’d rather listen. Here are the facts though: The league is composed of over 60 percent white men. When so much of the league has a background or comes from a place where there might be more privilege and opportunity, it’s very difficult to relate to something they have never seen nor experienced. That’s human nature. People are slower to educate themselves and be informed about something if they have never experienced it. They might even downplay the level at which those problems exist. But that certainly doesn’t let people off the hook. My only experiences with police are when they stand guard in our bullpen or when they escort us to the airport. No one has ever questioned my legitimacy as a citizen or a homeowner or a pedestrian. But I can’t pretend it doesn’t happen just because it has never happened to me. If we are willing to have an open mind and empathize rather than immediately getting defensive, then maybe we can start a far more constructive dialogue that hopefully leads to addressing these problems.

Then there was New England defensive end Chris Long. Speaking on ESPN Radio’s Russillo and Kanell Show, a show very unfriendly to these protests, Long said:

“I’ve had a lot of thoughts about it, and it’s hard, because you want to talk to the media, you want to say something about it. As you know with the media, it’s a long conversation and if you talk about it for a few minutes, they might take 10-15 seconds out of your quote and take you out of context, and run with the narrative.

“But I’ll make it pretty clear: I support my peers in exercising their right to protest. This is a wonderful country, and I think everyone agrees on that, but there are things in our country that can improve. I don’t think that by acknowledging as a white male that America isn’t the same for me, maybe, as it is for everybody, the same great place, that we’re complicit in the problem or that we’re saying America isn’t a great place.

“If we’re saying there are incidents of oppression in this country, systematically or individually in this country, I don’t think saying, ‘Well, in country X, Y or Z it’s 10 times worse’ is making things any better. I think that may be true, but why can’t we improve?

“I play in a league that’s 70 percent black and my peers, guys I come to work with, guys I respect who are very socially aware and are intellectual guys, if they identify something that they think is worth putting their reputations on the line, creating controversy, I’m going to listen to those guys.

“And I respect the anthem. I would never kneel for it. We all come from different walks of life and think differently about the anthem and the flag and what that means. But I think you can respect and find a lot of truth in what these guys are talking about, and not kneel. Those aren’t mutually exclusive ideas.

“Listen, it’s been complicated. It’s brought out a lot of what we as fans and players think about the anthem; a lot of strong feelings on both sides. But I think we can all agree we love our vets. We love the vast majority of officers of law enforcement. But they are human beings too and there are isolated incidents that need to be better and I think all guys are saying is ‘Listen, most people might be great cops, great people that protect our communities, but when there are injustices, let’s find justice for those situations.’

“I respect my peers, I respect Colin. Colin has really put his reputation on the line. He’s taken a beating. He’s also had support. I don’t think he did it for publicity.

“And listen, I’m just going to listen to my peers because I respect those guys, and I can’t put myself in their shoes.”

The fact that he said this to two sports talkers who would have been only too happy to hear Long trash his protesting teammates makes his statement all the more remarkable.

Josh Rosen, the quarterback of the UCLA Bruins did not speak about this issue, but it is notable—and egregiously underreported—that he spoke strongly against the NCAA.

“We’re not going to say ‘slave labor,’ but it’s almost like indentured servitude,” Rosen added. “I’m going to be OK. I want to fight for those who won’t be OK. I see it every day with these kids who are underprivileged.…

“OK, then, take .1 percent of [the hundreds of millions generated by players’ labor] and give to the families who are on food stamps on our team.”

Rosen also said it’s absurd to consider what he and his teammates do “amateur sports.” These comments are indicative of a new consciousness. It has not manifested itself in deeds as of this writing, but that day is coming. Megan Rapinoe has shown, by taking a knee while wearing the USA uniform, that it can be done. She said:

“It was something small that I could do and something that I plan to keep doing in the future.… It’s important to have white people stand in support of people of color on this. We don’t need to be the leading voice, of course, but standing in support of them is something that’s really powerful.”

You can sense that more overt acts of solidarity are coming. And they cannot happen soon enough.