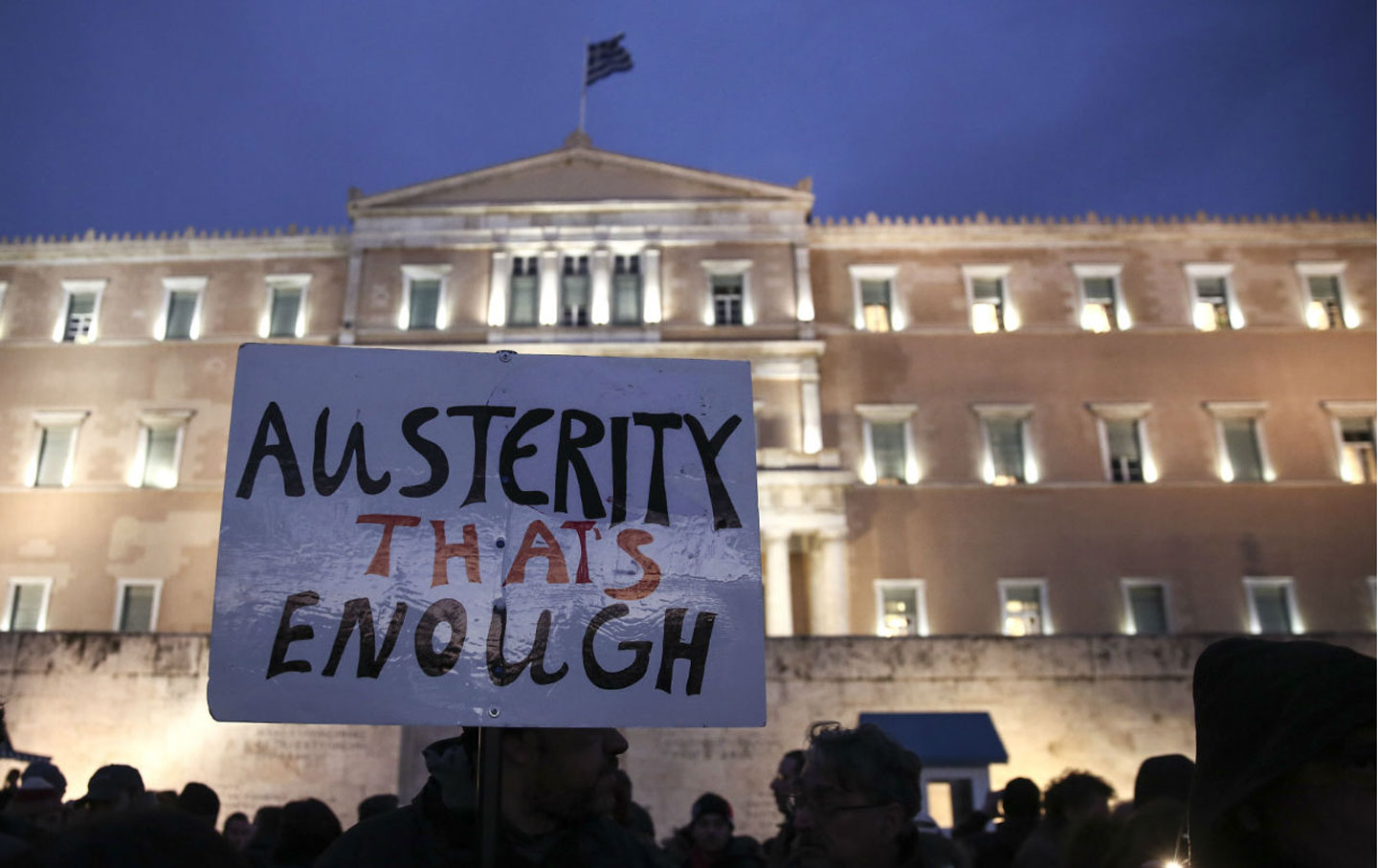 The bankers and finance ministers of Europe, and their allies on Wall Street and in Washington, framed Greece’s referendum vote on whether to accept or reject austerity in stark economic terms.

But Greek Prime Minister Alexis Tsipras framed the fight in entirely different terms—those of a struggle to renew democracy. And the Syriza leader and Greece’s anti-austerity government won on those terms.

Tsipras argued that the Greek people had a right to vote for a future that was different from the one dictated by distant bankers and bureaucrats.

The Greeks agreed with their elected leader, voting by an overwhelming 60-40 margin to reject the terms demanded—primarily by Germany and the International Monetary Fund—that the Greeks accept new austerity cuts in return for an extension of bailout funds. There is no question that, as The Guardian’s headline declares, Greece’s “no” vote “signals [a] huge challenge to eurozone leaders.”

But what will be portrayed in much of the media as a crisis is also an opportunity. There is an opening here for ending failed austerity policies and developing a more humane and functional economics that combines development, growth, and economic responsibility. This is what the voters of Greece want, and it is what Tsipras and his ministers are proposing.

Finally, there is a chance to bring the people into the process. That is a chance that should be taken—not merely as a means of opposing austerity but in order to renew democracy.

Amid the fury over the outcome, no one should lose sight of the importance of the vote itself. The Greek decision, made in the face of enormous pressure to accept the demands of the bankers and bureaucrats, was a victory for democracy. And Americans should support the Greeks as they seek to carve out a place for citizens and nation states in the new economic arrangements of the 21st century.

Vermont Senator Bernie Sanders gets that this is about more than one country. “I applaud the people of Greece for saying ‘no’ to more austerity for the the poor, the children, the sick and the elderly,” says the contender for the 2016 Democratic presidential nomination. “In a world of massive wealth and income inequality Europe must support Greece’s efforts to build an economy which creates more jobs and income, not more unemployment and suffering.”

Dan Cantor, the national director of the Working Families movement, gets the point as well. “Greece—the birthplace of democracy—is making a simple request: ‘Let our people vote on this proposal,’” explains Cantor. “We can’t allow these global finance titans to blackmail Greece’s democracy with their wealth. The U.S. controls the most votes on the board of the International Monetary Fund, and can use its influence to soften negotiations with Greece.”

Cantor is wise to note the specific role that the United States can play in fostering sound responses to a crisis. President Obama has sent some good signals in the recent past, telling CNN’s Fareed Zakaria in February, “You cannot keep on squeezing countries that are in the midst of depression. At some point, there has to be a growth strategy in order for them to pay off their debts to eliminate some of their deficits.” And the latest statements from the White House have been reasonably moderate—urging continued negotiations with a focus on getting Greece on the path to “financial sustainability” and growth.

These are signals worth noting. But there should be a broader message from Washington about the vital importance of bringing those who are most affected by austerity into debates about austerity—not just in Europe but around the world.

In an age of corporate globalization and immense pressure on nation states to accept austerity policies, the fight over Greece’s future has raised fundamental questions about the state of democracy. Chief among these is the question of whether the people of a sovereign state should have a say over their future—or whether, because of an economic or trade relationship with larger and more powerful countries, that say must be ceded to distant traders and bankers.

“For us, democracy is non-negotiable,” explained Tsipras, the leader of the Syriza government that has sought to free Greece from the impoverishment of imposed austerity. The bankers and the bureaucrats resisted the efforts of Tsipras and his government to renegotiate Greece’s relationship with the European Union in order to free up the country’s hobbled economy and to restore a social safety net.

“For us, democracy is non-negotiable” —Greek Prime Minister Alexis Tsipras

Rather than recognize the failure of austerity, the EU kept imposing “final offers” for more of the same austerity—demands for a continuation of the failed policies that have hobbled Greece’s economy and impoverished the country’s citizens. So Tsipras took his case back to the people, asking the Greek electorate to decide on whether to accept austerity or fight for a better deal—either within the EU, if that is possible, or outside of it if that is necessary.

“This is our political alternative to the neoliberal process of European integration: democracy, more democracy and even deeper democracy,” says Tsipras, who greeted the election results with a statement that he was ready and willing to renew negotiations.

Much of the media in the United States portrayed the decision by Tsipras and his ministers to bring the people into the process as madness—operating on the assumption that great economic decisions can only be made by great economic powers and their mandarins.

But the Greeks are attempting to democratize economic decision making. This is not just good, and right; it is necessary. The strangling grip of austerity will not be broken with back-room deals and closed-door negotiations. It will be broken by citizens making clear that they will no longer stand for a regimen that imposes brutal cuts on working families in order to preserve the wealth of billionaires and the authority of central banks.

This is not a radical notion. The great mass of citizens must have a say with regard to their future if that future is to be functional and humane. Economists, scholars, and activists in Europe and the United States recognize that Greece is fighting for more than an alternative to austerity. The country that imagined democracy is now fighting for democracy. And Greece is being cheered on in that fight by those who recognize that another world is possible—and necessary.

“The rising crescendo of bickering and acrimony within Europe might seem to outsiders to be the inevitable result of the bitter endgame playing out between Greece and its creditors. In fact, European leaders are finally beginning to reveal the true nature of the ongoing debt dispute, and the answer is not pleasant: it is about power and democracy much more than money and economics,” argued Nobel Prize–winning economist Joseph Stiglitz on the eve of the Greek vote.

We should be clear: almost none of the huge amount of money loaned to Greece has actually gone there. It has gone to pay out private-sector creditors—including German and French banks. Greece has gotten but a pittance, but it has paid a high price to preserve these countries’ banking systems. The IMF and the other “official” creditors do not need the money that is being demanded. Under a business-as-usual scenario, the money received would most likely just be lent out again to Greece.

But, again, it’s not about the money. It’s about using “deadlines” to force Greece to knuckle under, and to accept the unacceptable—not only austerity measures, but other regressive and punitive policies.

The United States has not had a sufficient discussion about austerity. But this is an opening for that discussion, and for recognition of the threat that austerity policies pose to democracy.

“The financial and political titans of the world would like us to believe that ‘austerity’ is simply the bitter medicine we must accept in order to generate economic growth. But it’s not medicine at all—it’s poison. It is smothering working people, and threatening democracy itself. The collapse of Greece’s economy and the political blackmail of the Greek people is a case study in unchecked austerity politics,” says Cantor, who is absolutely right to urge President Obama and US officials to “press for a just and democratic solution to the crisis in Greece.”