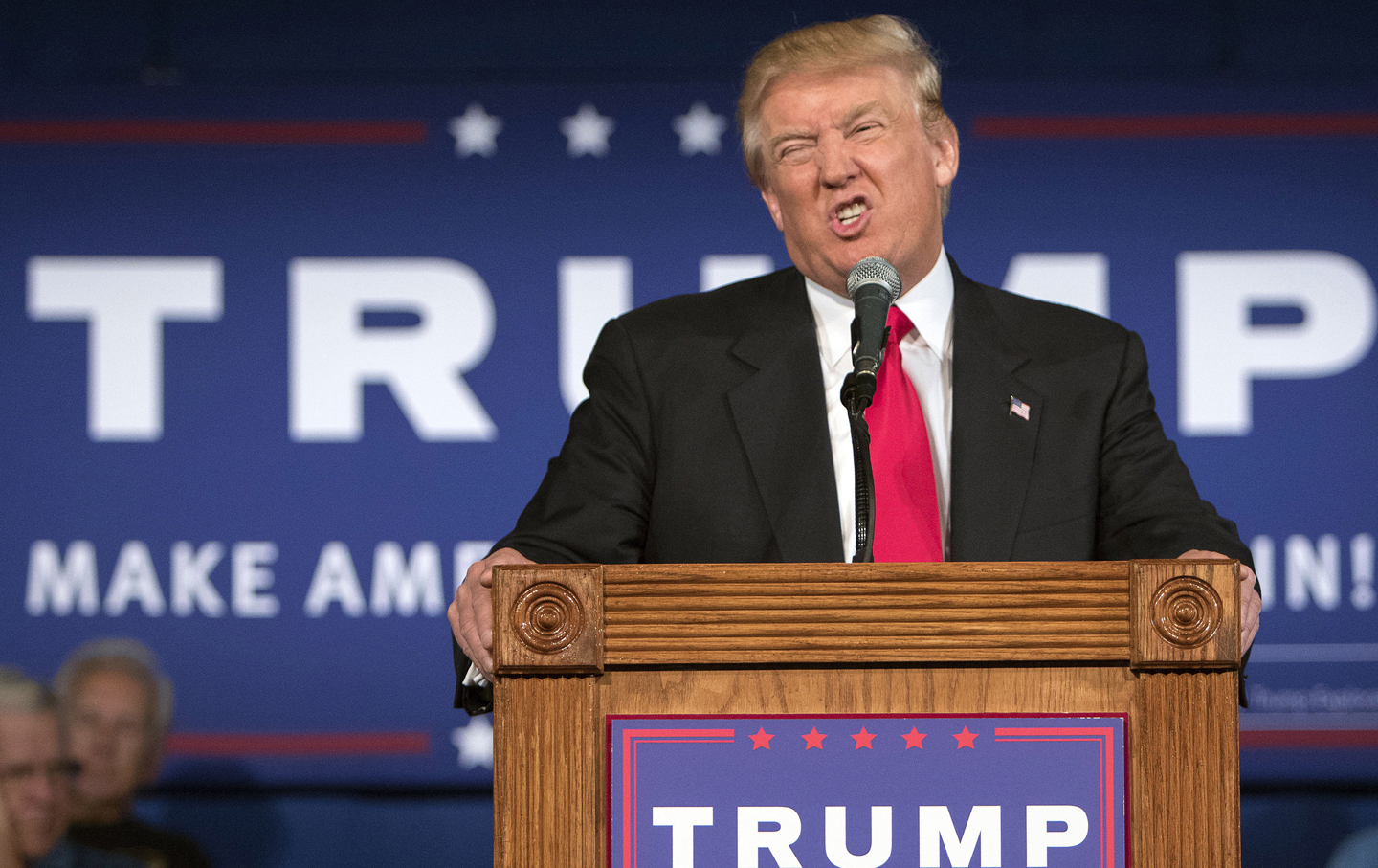 It hurts to put these words in print, but… Ann Coulter may be right. Shortly after the Paris attacks began last Friday, she tweeted, “They can wait if they like until next November for the actual balloting, but Donald Trump was elected president tonight.”

Stephen Colbert agrees. He told us this week to get used to saying “President Trump”—and led his studio audience to repeat the words in unison and then pretend to barf.

Yes, it’s hard to stomach. America’s most entertaining demagogue winning the GOP primaries and then the general? It can’t happen here, can it?

Democrats have been expressing absolute incredulity at the possibility, and quietly chuckling to themselves about the Clinton landslide to come if Donald is his party’s nominee. The Huffington Post has banned Trump from its politics section and relegated him to Entertainment, as if there he’d be no more than a joke.

The problem is that our liberal incredulity mirrors that of the Republican establishment, which refuses to believe that their front-runner of five straight months could possibly win their nomination. Now even after the carnage in Paris, Beltway pundits are telling themselves that the base will sober up and turn toward “experienced” pols like Rubio or Bush and away from the newbie nuts. As the always-wrong Bill Kristol said of this latest terrorism crisis, “I think it hurts Trump and Carson, honestly.”

But, honestly, it’s only strengthened Trump. Since the November 13 attacks, every poll—in Florida, two in New Hampshire, and three nationwide—shows Trump maintaining or expanding his lead against his primary opponents. Poor Ben Carson, only recently Trump’s chief rival, is losing energy like, well, you know who. In the Fox NH poll, it’s Trump at 27, Rubio 13, Cruz 11, and Carson down there at 9 percent alongside Jeb!

It’s easy to laugh at GOPers in denial, but progressives who pooh-pooh Trump’s chances of beating Hillary may be whistling past the graveyard of American democracy.

A post-Paris Reuters/Ipsos poll asked 1,106 people which candidate, from the entire 2016 field, could best tackle terrorism, and respondents put Trump and Clinton on equal footing, at 20 percent each.

Not good—when it comes to taking on terrorists, a reality-show “carnival barker” who’s never served in the military nor held elected office is tied with a decidedly hawkish former secretary of state?

Play it out: an outsider who’s dismissed by his party’s elite, comes into the race and overwhelms a large, much more experienced group of candidates in a series of state primaries, both increasing his margins and improving as a candidate as he goes long. All the time riding a crisis that seems made for his candidacy. Does that sound like a sure loser?

Here are three reasons why, after Paris—and Beirut and Mali—maybe we should get used to saying President Trump:

1. Racism is a flexible strategy: Trump’s ravings about Latino “illegals” have shifted seamlessly to Syrian refugees and Muslims of any origin. The “deportation forces” Trump would deploy to emulate President Eisenhower’s wretched “Project Wetback” could do double duty, pushing refugees out of the United States and into what he swears will be “a big, beautiful safe zone” in Syria. (For the real-estate mogul, the presidency is all about relocation, relocation, relocation.) If elected, Trump says he would “strongly consider” shutting down mosques, and he’s open to forcing Muslims to register in a database and have special IDs noting their religion. Hey, isn’t that like what the Nazis did to the Jews? a NBC reporter repeatedly asked Trump Thursday. Trump tried to ignore, and eventually replied, “You tell me.”

“Mr. Trump, what’s the difference between requiring Muslims to register and Jews in Nazi Germany?” “You tell me.” pic.twitter.com/U2wv5ba3Gz — justin kanew (@justin_kanew) November 20, 2015

Sure, Trump lacks government experience, but he has experience where it counts: He forced a black president to produce a long-form birth certificate, and he forced the fading immigration issue back to center stage—he knows how to frame “those people” as the problem.

2. The Paris attacks tend to reinforce choosing sides: The horror of ISIS’s terrorism plays into Trump’s narrative about a “crippled” America “losing” to more determined foes. And as Nation writers have noted, American cruelty toward those already fleeing the cruelty of ISIS (members of the House, including 47 Democrats, voted yesterday to halt Syrian and Iraqi refugees from settling here) plays directly into ISIS’s hands, validating their anti-Crusader narrative and flooding their 24-hour Jihadi hotline with more recruits than it can handle. But what do we expect? Violence and hatred usually help extremists on both sides of an argument.

3. Regardless of his daily distortions, Donald Trump sounds right—even prescient—to a lot of people: That’s in part thanks to how new media platforms can jumble cause and effect in people’s minds. The night before the Paris attacks, for instance, Trump bellowed that he’d “bomb the shit out of” ISIS and the Syrian oil fields they control. After the attacks, France and Russia stepped up their bombing, leading Trump to tweet: “Remember, I was the one who said attack the oil (ISIS source of wealth) a long time ago. Everyone scoffed, now they’re attacking the oil.”

Never mind that the United States and allies had “sharply increased their airstrikes against the sprawling oil fields that the Islamic State controls” back in October, as the Times reported the day before the Paris attacks. Nobody noticed then, nobody will now—reported facts have nothing on Trump’s tweets.

Whether Trump is correct, wrong, or shamelessly spinning may matter even less in a run against Clinton. Trump can sound right because he doesn’t have to defend anything—not the Iraq war vote, not the repeal of Glass-Steagall or the bank bailout or the crumbling roads and bridges or the sweetheart hedge-funder tax rates or the rise in student debt or the thousand other rip-offs the American people have suffered since both parties voted to take us to war off the books.

Hillary Clinton is one of the most qualified and experienced presidential candidates in decades. Which is another way of saying she’s been there for all of the above.

That leaves Trump in the powerful position of being able to attack Clinton from the left—painting her as a linchpin of the corrupt system who led us into the Middle East quicksand—and from the right—as weak on terrorism, as a dangerous fool, like Obama, for welcoming the refugee “Trojan horse” into our homes.

On the other hand, Clinton’s speech on combating terrorism yesterday got kudos from unexpected quarters. A Wall Street Journal story asked, “Why Didn’t Obama Give Hillary Clinton’s Speech on Defeating ISIS?”; Joe Scarborough, no Hillary fan, said this morning, “That’s what a leader looks like in a time of crisis.”

Maybe, just maybe party-switching will favor her come next November: For every anti-neocon Dem going for Trump, more Trump-fearing Republicans will secretly vote for Clinton.

Because otherwise we could be living in Colbert’s nightmare and Coulter’s dream.