Last month, after Maryland’s Representative Elijah Cummings criticized conditions in the migrant camps along the border with Mexico, President Trump went on to Twitter to call Cummings’s district—a sailboat-shaped parcel that covers about half the city of Baltimore and big chunks of Baltimore and Howard counties—a “disgusting, rodent and rat infested mess,” “very dangerous and filthy,” “the Worst in the USA.”1

To be clear: The president does not know anything or care about the city of Baltimore. He doesn’t know the history of segregation that shaped it, and he doesn’t care what’s behind the near-pornographic images of urban apartheid on his TV screen that seem to have been the inspiration for his Twitter bombast.3

Yet if you asked him who was to blame for the “mess” he thinks he sees in Baltimore, you might find—somewhere down the list, after Cummings, Democratic city officials, and black people in general—that even a blind pig can sometimes root up an acorn. What are the nine most terrifying words in the English language? Ask Trump, then ask a historian of American cities. You might get the same answer: “I’m from the government, and I’m here to help.”4

It is true that Baltimore has more crime than other cities. It’s true that its schools are worse and true that many of its citizens are less healthy and die younger than their counterparts in other places. Baltimore was once a great manufacturing center; today capital investment swamps white neighborhoods and starves black ones. Today to be born poor in Baltimore is to stay poor.5

It’s true, too, that these arrangements are deliberate. The cities we have are the cities we’ve built: They reflect our choices and embody our values. If they are toxic, it’s because we make them so. And for more than a century now, the chief orderly administering a slow drip of poison into Baltimore’s veins has been the government itself.6

The story begins in 1901, when a new school superintendent arrived from Denver and made, he thought, an uncontroversial proposition: to convert a half-empty German-language school near Pennsylvania Avenue into a high school for the neighborhood’s black students. To his great surprise, white West Baltimore boiled over in protest.7

The Baltimore Sun explained why. It was, the newspaper said, a “self-evident fact that the presence of a negro school, or of any negro institution whatever in a neighborhood where white people reside, will lower the value of their property and that the presence of such a school will be an incentive for negroes to move into the neighborhood and by so doing further lower the value of property and reduce the taxable basis of the city.”8 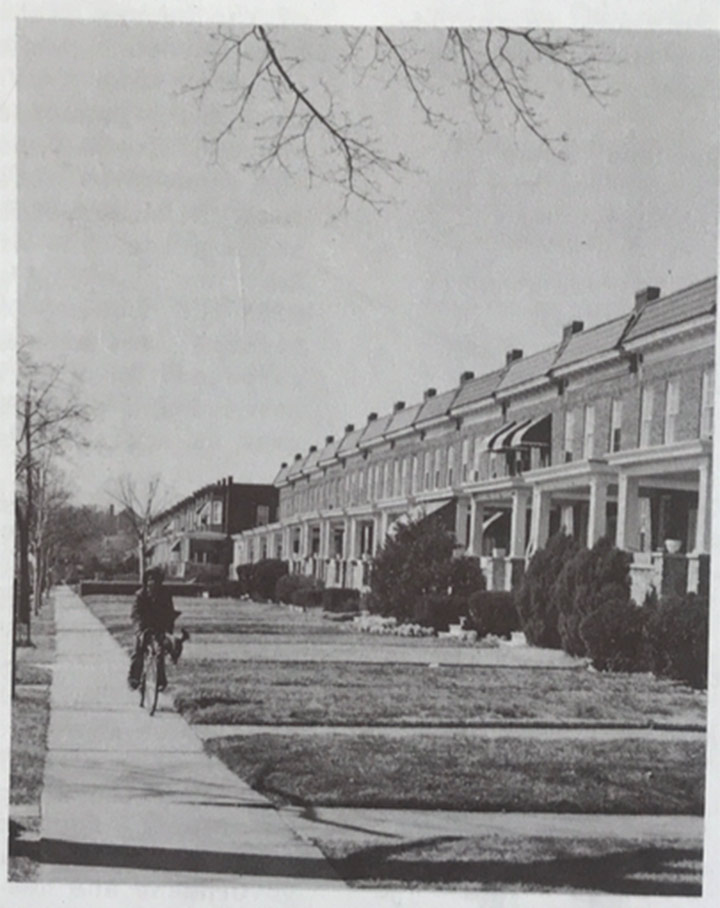 Baltimore's Rosemont neighborhood in 1975. (Courtesy of The Settler: A Chronicle of Home Ownership in Baltimore)

The Sun’s “self-evident fact” was neither, really—but it suited the prejudices and fattened (or seemed to fatten) the wallets of Baltimore’s white homeowners, so many believed it. This belief spawned others—for example, that it was the city’s responsibility to keep white-branded homes, schools, and neighborhoods safe from black “invasion.”9

And so the municipal government began to act on the mandate that would shape the city for the next century, bumping black Baltimoreans from place to place to suit the whims of their white neighbors.10

From 1910 to 1917, Baltimore passed a series of residential-segregation ordinances that tried to prescribe where black people could and could not live. Its laws served as templates for similar ones in dozens of other American cities, but in 1917, in the case Buchanan v. Warley, the Supreme Court ruled that such ordinances were unconstitutional. So city officials quickly came up with other means to the same end, including a municipal commission to “divide the city into districts with reference to the height, area, and use of land and buildings.”11

This type of segregation did not nakedly forbid anybody to move into any part of Baltimore, so it did not run afoul of the Buchanan ruling. Yet zoning had and still has some of the same effects the proponents of the segregation ordinance looked for. It’s perfectly legal, for example, for minimum-lot-size rules or prohibitions on multifamily dwellings to make it impossible for low- or middle-income people to live somewhere—a different route to a similar end.12

For the first half of the 20th century, local officials did all they could to build an invisible wall around black Baltimore. Still, as they would soon learn, no one makes Jim Crow concrete more efficiently than the federal government.13

From the 1930s on, almost everything the federal government did in Baltimore—from public housing to highway building to urban renewal to redlining—had the same animating principle: to, as one federal housing official wrote in the 1930s, “block the negro from encroaching upon white territory.”14

Take West Baltimore’s Rosemont neighborhood, on the eastern shoulder of Gwynns Falls Park. Rosemont was developed at the height of the city’s post–World War I suburban boom, and from the start, the men who built its squat, cheerful houses touted their appeal “to the family desiring the best in environment with close proximity to downtown.” By the early 1950s, the neighborhood still boasted what one resident called “all the amenities of suburban living”: “better housing, street maintenance, better equipped schools…and open spaces where we could breathe cleaner air and enjoy the blessings of nature.”15

But by then, most of the people who lived there were black—and as soon as Rosemont became a black-branded neighborhood, it became a target. When officials looked at it, they saw what they wanted to see: a slum, plain and simple. Then they aimed an urban-renewal campaign right at it.16 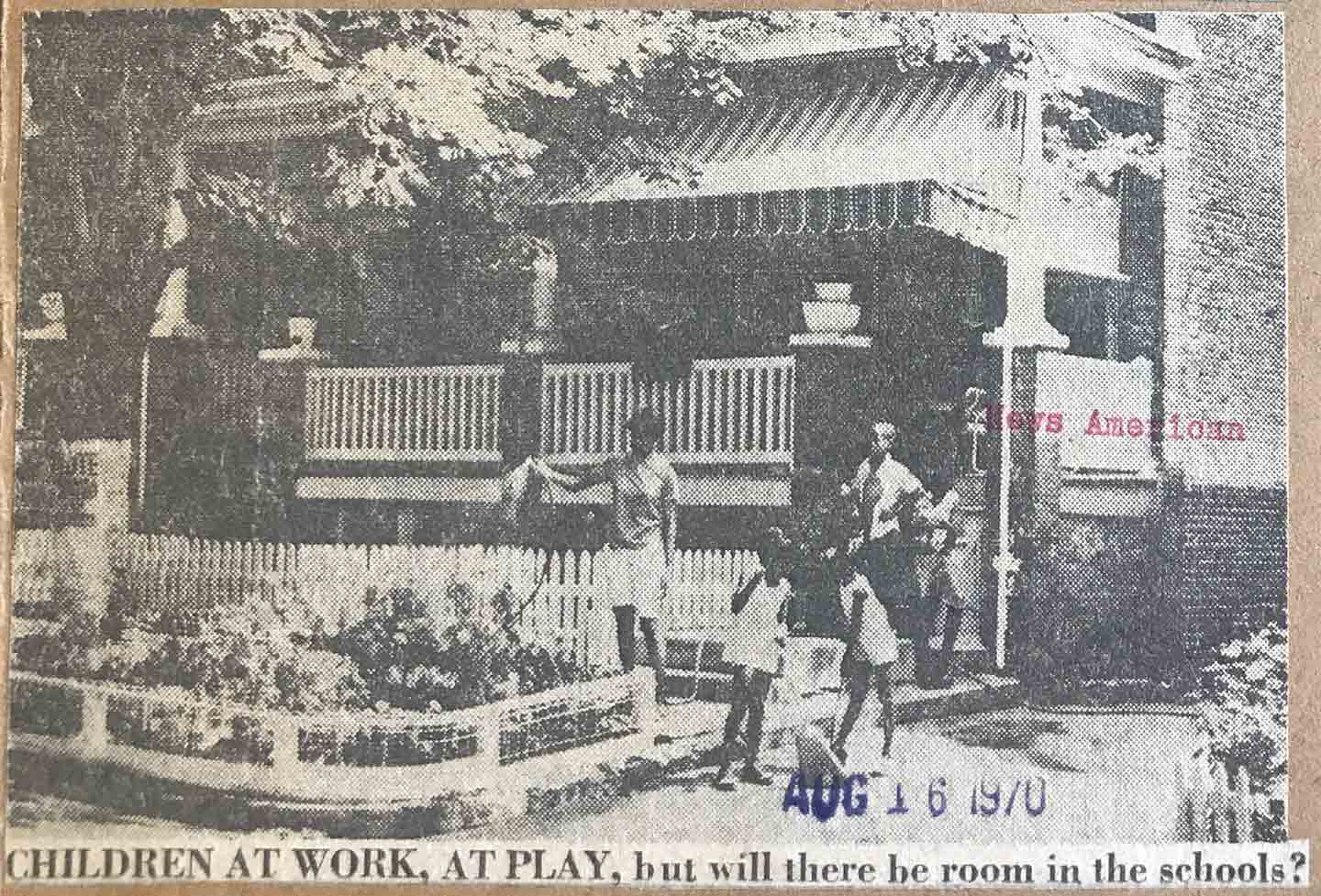 Across the country, one of the most important pieces of the entire urban-renewal operation was the express highway, designed to carry workers and shoppers in and out of city centers while burying slums and blighted areas under a ribbon of asphalt. These roads had to slice through places like Rosemont because those places sat between the city and the new, white suburbs.17

Baltimore’s highway engineers had been batting around plans for highways for decades, but in 1956 the $26 billion Federal-Aid Highway Act promised to pay 90 percent of their cost. The next year, flush with government cash, planners mapped two dozen miles of high-speed roads through the city’s core. One of these, eight lanes wide, would carve Rosemont neatly in half.18

For the next decade, officials tweaked and retweaked the route of the expressway through Rosemont, drawing and lifting condemnation lines as they went. When they started their work, Rosemont was the opposite of what Trump might call a shithole. Most everyone there had a job, a yard, and at least a high school diploma; every pot sat squarely on its own bottom. The majority of Rosemonters had lived in the neighborhood since the early 1950s, and they were 50 percent more likely to own their homes than the average Baltimorean.19

Because they were black people in a black-branded neighborhood, they financed their purchases without the kind of low-interest federally insured mortgages their white counterparts got. They made do, instead, with exploitative, usurious loans from real estate agents and contract sellers. Even so, a 1967 study showed that Rosemont’s homeowners spent thousands of dollars every year on upkeep and renovations and many were close to owning their homes free and clear.20

But as long as the justification for the urban-renewal expressway was slum clearance, then everything in its way was ipso facto a slum. As one local activist wrote, the entire neighborhood waited “in limbo [as] residents valiantly try to keep from becoming a near slum…because no one is sure whether the area will become a great asset to the city or a two minute short cut.”21

By the end of the 1960s, no one seemed to know whether there would be a highway through Rosemont or what its route might be or whose homes it might take. But many residents didn’t want to wait around to find out; they sold for what they could get. No bulldozers came to knock down the condemned houses the city had bought. Tenants came and went as the buildings deteriorated. Nobody lifted the original condemnation lines. “In Rosemont,” one anti-road flyer said, “the state has created chaos.” A “viable area” had become a “blighted scar.”22

In the end, the Rosemont segment of the expressway, known in Baltimore lore as the Road to Nowhere, never did get built. Yet, as Sun reporter James Dilts wrote in 1968, “plans for highways, if they are around long enough, become self-fulfilling prophecies.” The federal government tried to pave over a thriving black middle-class neighborhood because it was in white people’s way—and along the way, it created precisely the conditions that Trump mocked Cummings for.23

Today, Rosemont looks a lot more like the rest of Baltimore than it once did. The well-paid factory jobs that once kept the place afloat are gone, wiped out by deindustrialization—another result of policy choices whose weight rested disproportionately on black neighborhoods. The median household yearly income is $21,000, not the lowest in the city but far from the highest. Rents (and vacancy rates) are high. The poverty rate is 37 percent. Local schools are still nearly 100 percent black. And as for crime rates, according to one real estate blogger, who seems to have taken rhetorical cues from Trump, “Greater Rosemont has been known to have certain sections resemble that of a war zone.”24

The lesson here: We have spent hundreds of millions of dollars and more than 100 years turning Baltimore into the “rat infested mess” Trump thinks he sees when he looks at it. We did this because people like Trump decided the government’s job was to enrich white people—like his son-in-law, a Baltimore slumlord—on the backs of black people, and so we built a government that would do just that. In this regard, what Trump called “King Elijah’s Baltimore Fail” isn’t a failure at all. On the contrary, Baltimore is working just as it was designed to.25