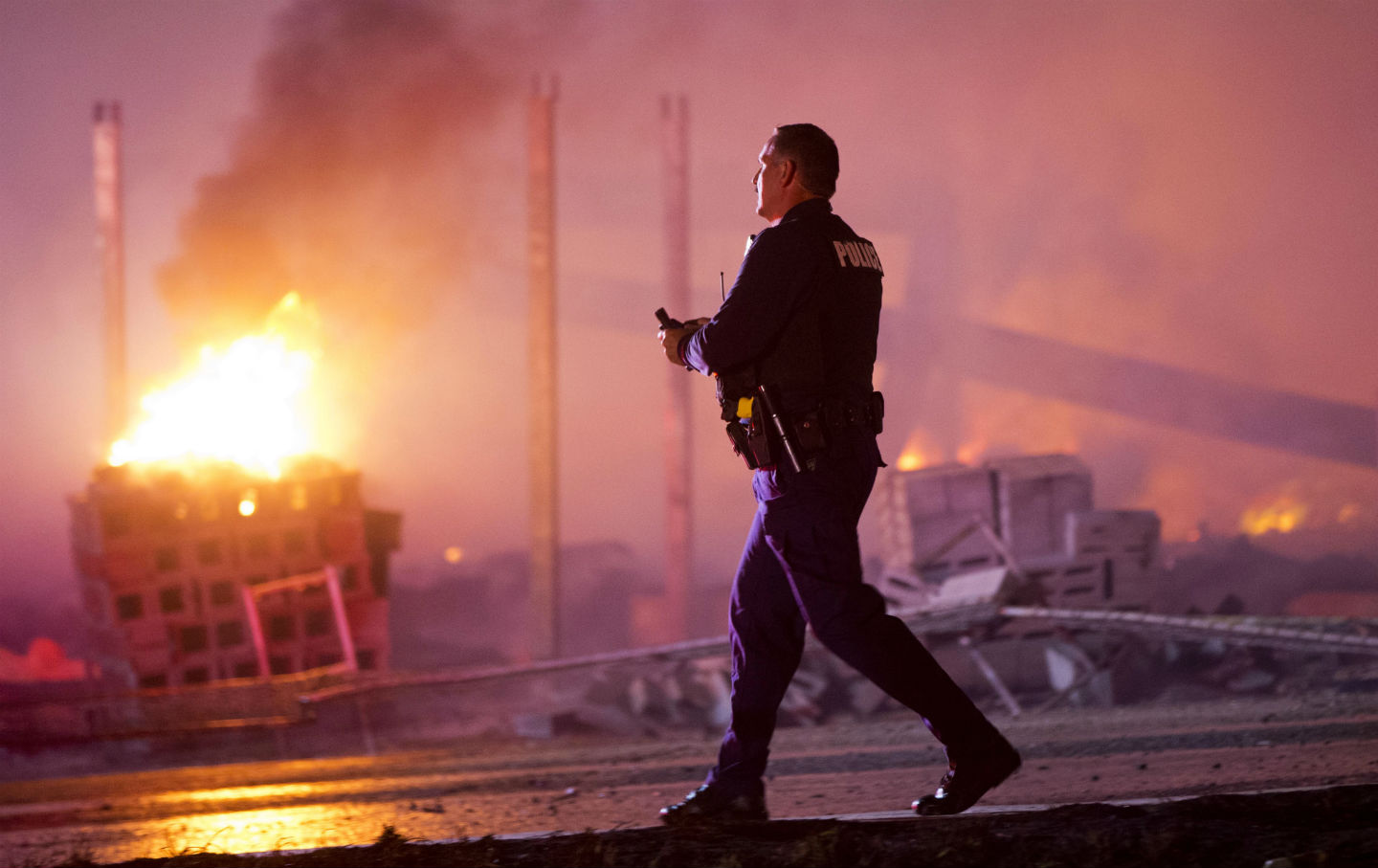 A police officer walks by a blaze in Baltimore. (AP Photo/Matt Rourke)

In the last year, the killing of black men by police has become visible as an epidemic. Less visible—at least to those baffled by the scenes of mass unrest in the streets of Baltimore—is the impoverishment of black families. With a median net worth of just $6,446, African-American households in 2011 were 10 percent poorer than they were in 1984, according to a Pew Research poll. In contrast, median net worth for a white family in 2014 was $142,000. Today, the average black family has approximately 1/17 the wealth of the average white family.

In Baltimore, this widening economic gap between black and white has been exacerbated by an urban landscape that has physically and socially isolated poor black Baltimoreans from their neighbors. To understand the anger in West Baltimore and the reasons police brutality has not abated, we need to understand this history.

In 1950, Baltimore was the sixth-largest city in the country, with a population of roughly 1 million. At the time, the Sparrows Point Steel Mill was one of the largest employers in the city, with 30,000 employees. It produced over 10,000 tons of steel per day. At the mill’s height of production during World War II, blacks comprised a third of its workforce, a higher percentage than most other mills in the nation. These were relatively stable jobs, particularly after 1941, when African-American votes swung the balance in favor of unionization.

According to historian Linda Zeidman, there was not enough housing for workers near the mill during the 1930s and 1940s. Since the neighborhoods of Dundalk and Highlandtown to the plant’s immediate northwest were segregated, many African-American steelworkers settled 15 miles away in West Baltimore, one of the only neighborhoods where they could buy or rent property. Unionized and generally well-paid steel workers received decent health insurance, sick pay and vacation time between 1945 and 1970.

Then, in the early 1970s, foreign competition for steel resulted in huge job cuts. Three thousand workers lost their jobs in 1971; 7,000 more in 1975. By the late 1980s, the mill employed only 8,000 people. Those astonishing job losses devastated West Baltimore. Overall, Baltimore lost 100,000 manufacturing jobs by 1995, and the city’s population shrunk by 35 percent. Today, the city is the 26th largest by population in the United States.

As the devastation took hold, many Baltimoreans with means migrated across the jurisdictional boundary between Baltimore City and Baltimore County into newly built suburban neighborhoods. Some of those neighborhoods specifically forbade African-Americans, Jews and sometimes Catholics from moving in. Simultaneously in the city, banks used federal Home Owners’ Loan Corporation–produced maps to determine whom they would and would not lend to. Those maps marked red most of what became known as the “inner city.” Citing the risk of lending in neighborhoods characterized by “undesirable racial concentrations,” banks did not issue loans to those living within the red zones. In short, poor blacks became physically and economically trapped in parts of inner East and inner West Baltimore as whites and those with means moved into the county. Free of the city’s tax burden, many county residents paid only peripheral attention to the urban crisis unfolding just miles from their new homes. Not even Mayor William D. Schaefer’s desperate branding of Baltimore as “Charm City” in 1975 could stanch the bleeding.

As manufactured goods production moved out of town and overseas, new Cold War military-industrial aerospace facilities and associated industries built plants far outside Baltimore. As Baltimore’s tax base plummeted, residents in the city’s core became further trapped in a web of dysfunction. Many of those African-Americans had only recently migrated from the South for the very industrial jobs that were being simultaneously eliminated.

The built environment also produced new forms of segregation. Major thoroughfares and highways like Route 40, a sunken road built to interstate specifications that was originally designed to be the eastern terminus of Interstate 70, cuts through West Baltimore like a knife, dividing neighborhoods and creating dangerous zones of desolation. Martin Luther King Jr. Boulevard, a major 6-lane high-speed thoroughfare built in the early 1980s, ironically slices directly through Old West Baltimore, once the city’s most important African-American neighborhood, and physically segregates it from the central business district. To the immediate northwest of MLK Boulevard lies the huge, hulking State Center office complex, which reinforces the divide, making it very difficult for West Baltimore pedestrians to enter downtown. In East Baltimore, the elevated Interstate 83 similarly divides the central business district from troubled neighborhoods further east, physically cutting residents off from City Hall and other vital institutions and creating what Jane Jacobs termed a “border vacuum.”

High-rise public housing projects reinforced the segregation caused by new roads. Constructed in the 1940s and 1950s, the high-rises replaced city blocks that planners had classified as “slums” and surrounded the central business district like a red brick wall. Since early- and mid-20th-century planners looked at the street as a breeding ground for filth and crime, they designed the new public housing structures around courtyards. In the early years, those courtyards were places for socialization. However, by the early 1980s, as jobs evaporated and those with the means migrated away, the courtyards, dark at night, became breeding grounds for drugs and violence. The city demolished most of the structures in the 1990s, but their absence produced more useless and, therefore, dangerous zones of desolation.

As a result of all of this, Baltimore became what urban geographer Mike Davis termed a “fortress city,” one “brutally divided between ‘fortified cells’ of affluent society and ‘places of terror’ where the police battle the criminalized poor.” Looking at a map of West Baltimore, which includes the neighborhoods of Upton, Sandtown-Winchester, Druid Heights and Harlem Park, it becomes easier to understand how many residents interpret the area in which they live as a physically, socially and economically isolated place of terror.

Bordering the Upton neighborhood to the southeast runs Martin Luther King Jr. Boulevard. To the east runs Interstate 83, which slices directly through the valley of one of Baltimore’s most historically important but profoundly neglected waterways, the Jones Falls. To the north lies the now infamous Mondawmin Mall and Druid Hill Park, which the Susquehannock Natives ceded to Lord Baltimore in the mid-17th century. To the far west lies Leakin Park, one of the most expansive urban wilderness parks in the country. Most of Baltimore’s vital economic, political and educational institutions lie far beyond those boundaries, virtually inaccessible to those who live within them. Living in neighborhoods devastated by an unemployment rate of 37 percent among black males, a black infant mortality rate of 10.3 per 1000 live births (roughly equivalent to rates in Romania, Panama and Mauritius), a black high-school graduation rate of only 64 percent, pervasive lead-paint poisoning, and a shameful lack of fresh food in addition to the legacy of slavery and increasingly acute economic inequality, the rage of black Baltimoreans becomes much easier to understand.

Most of those policing the West Baltimore fortified cell live far away, either in more stable sections of Baltimore City or in parts of Baltimore, Harford, Anne Arundel, Howard, and Carroll Counties. They patrol their territory in squad cars and police vans. Those vehicles, though efficient, separate police from those they are sworn to protect. This has been the case since the 1950s, when police departments across the country began to purchase powerful vehicles to move more swiftly throughout expanding metropolitan areas. If the police live in faraway neighborhoods and are physically, culturally, and economically separated from West Baltimore’s residents, it is no wonder that those residents view police with distrust and suspicion. To those residents, the police represent the only arm of the governing white power structure that they see on a regular basis. It is certainly true that many Baltimore politicians, including the current mayor, are black. However, that has arguably made the situation worse for poor black residents—it exacerbates racial divisions between the city, which is 64 percent black, and the rest of Maryland, which is 70 percent white. It should therefore not be surprising that, given all of these brutal forces, West Baltimoreans would explode in anger and grief when the police snuff out the life of an unarmed young man. In fact, it is surprising that it doesn’t happen more often.

In 1979, in the wake of an earlier explosion of anger in Baltimore, Sun journalist Barbara Koeppel reported that Mayor Schaefer shook his head repeatedly in front of television cameras, muttering, “I don’t know why, I don’t know why.” Koeppel enumerated the structural inequalities that still plague Baltimore and have only worsened 36 years later. West Baltimoreans are sick and tired of lip service, and many white Americans are still asking “why?”