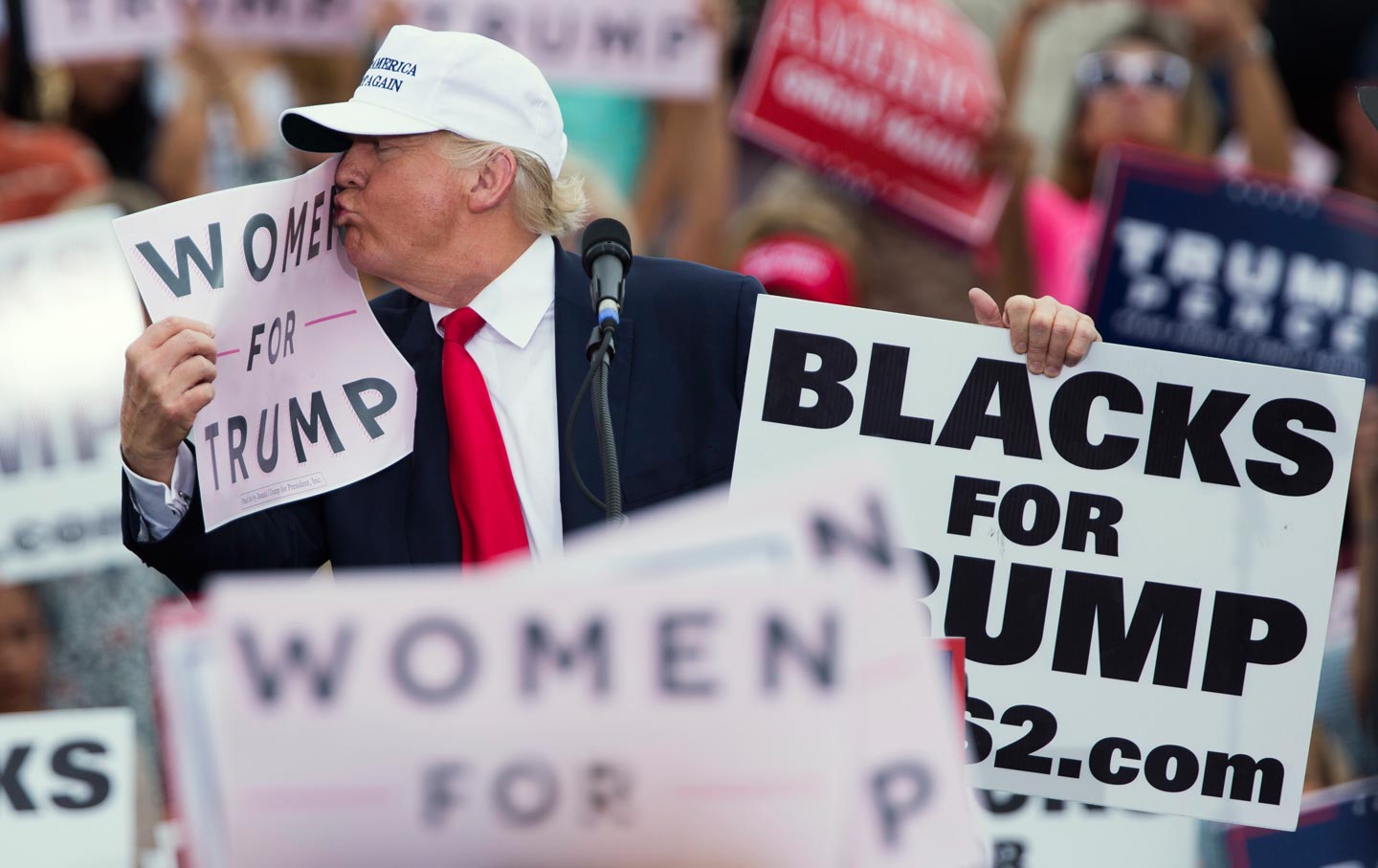 Based on the year he spent shadowing Donald Trump for his book The Art of the Deal, ghostwriter Tony Schwartz says that the GOP nominee’s attacks on others always contain an element of projection: His foes share the traits he has.

Something I saw early on w/ Trump: most negative things he says about others are actually describing him. Read his tweets with that in mind

It’s beginning to look like when Trump announced his campaign attacking undocumented Mexican “rapists,” and today insists former President Clinton is a “rapist” too, he has indeed been projecting.

At least six women have come forward to multiple news outlets in the last 24 hours accusing Trump of kissing, groping, or even attempting to, as Trump so crudely put it in the Access Hollywood video that rocked his campaign, grab them “by the pussy.” A stranger seated next to Trump on a first-class flight; a People magazine reporter; a 22-year-old who worked for a real-estate firm in Trump Tower; a bevy of beauty-pageant winners; it seems there may be enough Trump sexual-assault accusers that every news outlet will eventually have their own.

Wednesday also saw the revelation that Trump entered the dressing rooms of the Miss Teen USA pageant, according to five former competitors, surprising juvenile contestants in various states of undress. Trump had already been caught boasting on tape to Howard Stern about one great perk of his job as beauty pageant owner: getting to burst into dressing rooms to inspect his property. “You know, they’re standing there with no clothes…. And you see these incredible looking women, and so, I sort of get away with things like that.”

Trump helped trigger the tsunami of accusations himself, by insisting that what he called “locker-room talk” on the Access Hollywood video was “just words,” and categorically denying during Sunday’s debate that he’d ever put his words into action. “I just wanted to punch the screen,” 74-year-old Jessica Leeds told The New York Times. More than 30 years ago, she told the paper, Trump had lifted the armrest between their first-class seats and begun to grope her breasts and force his hands between her legs. “He was like an octopus. His hands were everywhere,” Leeds recalled. “It was an assault.” And by insisting the nearly 40-year-old rape charge against Bill Clinton by Juanita Broaddrick must be believed—and, in fact, hosting Broaddrick and other Clinton accusers at Sunday’s debate—Trump has made it hard for his campaign to demand the media ignore the never-prosecuted and in some cases decades-old charges against him.

Trump denied all of the allegations to the news organizations that reported them—and of course, in recent hours, on Twitter as well. “You are a disgusting human being,” an “agitated” Trump told the female New York Times reporter who called him about the claims. On Thursday morning, Trump’s lawyers sent The New York Times a letter demanding a retraction and an apology.

Dozens of GOP officeholders fled Trump when the Access Hollywood video came out, but in the last few days, as the smoke seemed to clear, several flipped back to supporting the GOP nominee, most notably Senators Deb Fischer of Nebraska and John Thune of South Dakota. Will they now flip back? With 26 days before the election, how can any Republican but the most rock-ribbed right-wing Neanderthal continue to support the party’s nominee?

We’ll have to see. The prospect of several accusers a day coming out describing similar Trump assaults has to be devastating for party leaders, but it doesn’t necessarily change the power equation as they’ve balanced it to date: The loudest, most passionate elements of the party’s base have stood by their man thus far, and it’s hard to see why these accusations would peel off many of them, given that Trump is blaming the revelations on the machinations of the evil Hillary Clinton campaign.

But Trump’s disgusting audiotape lit up the wires of sexual assault hotlines in the last week. The notion that his boasting triggered his victims to come forward, in one case after 30 years, is believable to people who work with sexual-assault victims, who often blame themselves for somehow inviting the abuse.

“Like many women, I was ashamed and blamed myself for his transgression,” People staff writer Natasha Stoynoff wrote. “I minimized it (‘It’s not like he raped me…’); I doubted my recollection and my reaction. I was afraid that a famous, powerful, wealthy man could and would discredit and destroy me, especially if I got his coveted people feature killed. ‘I just want to forget it ever happened,’ I insisted.” But when she saw Trump deny putting his offensive words into action, she could no longer forget.

There is no sign the Trump campaign will be cowed by the new allegations. The GOP nominee is up to his nasty old tricks on Twitter, and campaign manager Steve Bannon, who has faced his own accusations of domestic violence and sexual harassment, promises that he’ll turn “Bill Clinton into Bill Cosby,” keeping up the campaign to brand the former president a rapist. Alex Jones’s Infowars.com continues to challenge fans to disrupt Clinton campaign events by screaming and carrying signs calling Bill Clinton a rapist; on Wednesday two young white men were escorted from vice-presidential nominee Tim Kaine’s rally at Davidson College outside Charlotte, North Carolina. This campaign is unlikely to rise from the gutter, on the GOP side, any time soon.

But as even Trump’s defenders try to blame these latest allegations on the Clinton campaign, they ought to look in the mirror. On August 6, 2015, Fox News host Megyn Kelly tried to warn them of the baggage the first-time candidate carried, when it came to his treatment of women.

You’ve called women you don’t like fat pigs, dogs, slobs, and disgusting animals…. Your Twitter account has several disparaging comments about women’s looks. You once told a contestant on Celebrity Apprentice it would be a pretty picture to see her on her knees. Does that sound to you like the temperament of a man we should elect as president, and how will you answer the charge from Hillary Clinton, who was likely to be the Democratic nominee, that you are part of the war on women?

Kelly was rewarded by a campaign of misogynist hate from Fox viewers led by Trump, who depicted her as a menstruating harridan with “blood coming out of her wherever.” So you can’t say you weren’t warned, Republicans. This is on you. And a word to the media: Given Trump’s apparent ability to turn coarse, threatening words into action, maybe it’s time to stop claiming that he really doesn’t intend to forcibly deport 11 million undocumented people, or put Clinton in prison. The burden of proof that he’s not a misogynist authoritarian is now officially on Donald Trump.