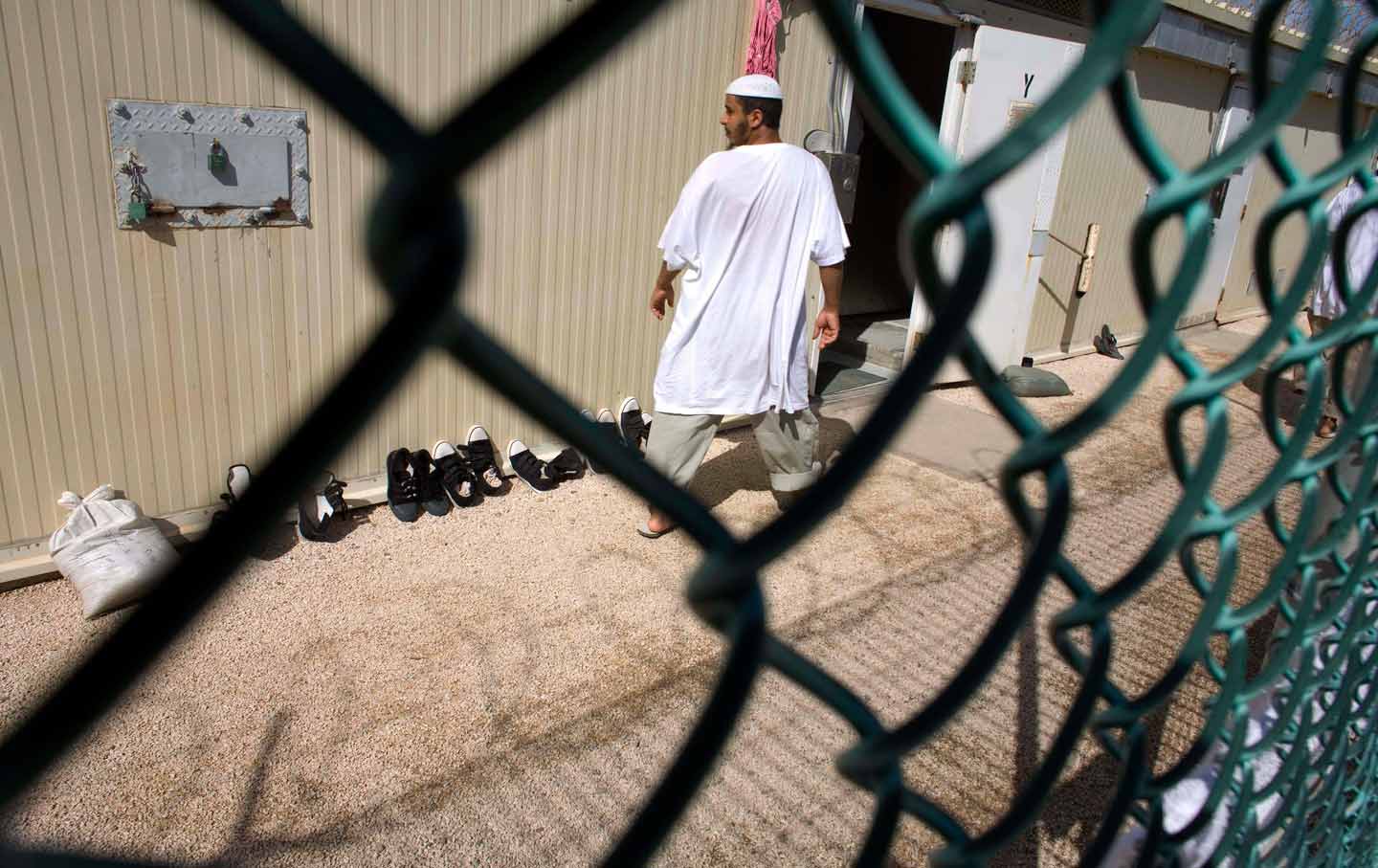 A Guantánamo detainee walks past a cell block at the detention facility in Cuba. (AP Photo / Brennan Linsley)

In July 2002, US military forces raided a compound in Logar Province, Afghanistan, looking for a suspected fighter who went by the alias Abdul Bari and had ties to an Al Qaeda bomb maker. They found an Abdul Bari, who had in his possession “samples of unknown substances…including a white powder, that were initially believed to be chemical or biological agents,” according to a February 2015 intelligence report. That man was then sent to the prison at Bagram airbase, and later that year transferred to Guantánamo Bay, where he remains today.

In reality, none of the information gathered in the 2002 raid was accurate. The person that the US military had captured was an Afghan named Abdul Zahir, who sometimes used the common nickname Abdul Bari, but who worked as a translator for the Taliban government to support his family. He had no ties to an Al Qaeda bomb-maker. The suspicious items in his possession, according to the 2015 report, were actually “salt, sugar, and petroleum jelly.” The report, issued more than 12 years after his capture, determined Zahir “was probably misidentified as the individual who had ties to al-Qa’ida weapons facilitation activities.”

In July 2016, a parole board-like body called the Periodic Review Board, comprised of representatives from all major agencies in the national security apparatus, found Zahir was eligible for transfer out of the prison at Guantánamo Bay. But now, as Donald Trump prepares to be sworn in as the 45th president of the United States, Zahir’s window to escape is closing. In both statements and in his national security appointments, Trump has made it clear he intends to keep Guantánamo open and perhaps send more people to the legal black hole. “There should be no further releases from Gitmo. These are extremely dangerous people and should not be allowed back onto the battlefield,” he tweeted on January 3, in response to the Obama administration’s efforts to release as many Guantánamo prisoners who have been cleared for release as possible. Trump has previously promised to “load [Guantánamo] up with some bad dudes.”

Yesterday, the Obama administration announced the transfer of four detainees to Saudi Arabia. That leaves 55 prisoners, 19 of whom have been cleared for release. The administration has all but conceded that it will fail in its efforts to shutter the prison, and even if every detainee cleared for transfer is released, the detention facility will continue to hold nearly 40 men.

Lt. Col. Sterling Thomas represents Zahir, and in a telephone interview the day after Trump’s tweet, told The Nation about the stress his client is facing. “He is very worried,” says Thomas. “He is quite anxious, as many of the men are down there, about what their fate will be. Whether they will be released, or whether they will be held without end under the incoming administration.”

Little is known about the specifics of the abuse Zahir underwent while in US custody. His name doesn’t appear in the unclassified executive summary of the Senate Torture report, but when asked if Zahir had been tortured, Thomas said, “He was. I can’t get too much further into it….but yes, he was.”

Although Zahir has been cleared for transfer, the specifics of where he might go, and when, are not available for public release, according to Thomas. In addition to his two wives, Zahir has three sons, who were 5, 3, and 1 and a half years old when he was abducted. “He is hopeful he’ll be able to go to a country where he can be reunited with his family, and provide for their needs, and attend university,” says Thomas.

During his confinement, Zahir has taken up poetry—Thomas describes him as “quite prolific”—and sketching. The review body that determines whether detainee’s documents can be made public has yet to clear any of Zahir’s writing or visual arts. Zahir speaks Pashto, Arabic, and English, and could potentially go into translation services if he is released. In addition to that, he’s been taking computer-literacy classes, says Thomas, since “he’s been off the grid for a quite a while.”

At one point, Zahir was charged in the Guantánamo legal system—called military commissions—with throwing a grenade at coalition forces, though those charges were ultimately dropped without explanation. “What I can tell you is that had we gone to trial, we were prepared to rebut them strongly,” says Thomas.

Beyond the nightmarish limbo that Zahir is in, it is all but certain that indefinite detention at Guantánamo Bay will be a feature of the Trump administration, virtually codifying it as a permanent aspect of the US national security state. Beyond Trump himself, the president-elect has surrounded himself with pro-Guantánamo figures, from National Security Adviser Michael Flynn to CIA-head-in-waiting Mike Pompeo. Yesterday, a Trump transition-team member said the president-elect will name recently-retired senator Dan Coats as his pick for director of national intelligence. In that role, Coats will be responsible for yearly reports on the possibility of reengagement among Guantánamo detainees, reports that could be used to justify indefinite detention.

Indeed, Coats has a record of opposing the closure of Guantánamo. “For years, the facility at Guantánamo Bay has been a valuable tool in our counterterrorism efforts,” he said in a statement just last year. “Moving Guantánamo detainees into the United States poses significant security risks, and we should not endanger American families simply for President Obama’s legacy.”

Coats has voted against allocating federal funds to transfer detainees to the United States for prosecution or imprisonment in 2012 and 2013, and voted against a measure that “prohibits the indefinite detention of citizens and lawful permanent residents.” He also voted in favor of an amendment that would prevent federal funds for “prosecution of enemy combatants in civilian courts.”

When Coats ran for Senate in 2010, he characterized his opponent as having voted to close Guantánamo in hopes to “move terrorists to the U.S. where they could have the same legal rights as Americans.” That statement, coupled with Coats voting records, suggests that as Director of National Intelligence he will support Guantánamo’s flawed legal system as the best venue for trying accused terrorists, despite all available evidence that regular civilian courts are better in every conceivable metric.

Zahir, for his part, is just hoping for a peaceful future after having spent 14 years in an island prison in a case of mistaken identity. “I don’t hold a grudge, I have no ill-will,” Thomas recalls Zahir saying once he learned he was eligible for release. “They made a mistake.”