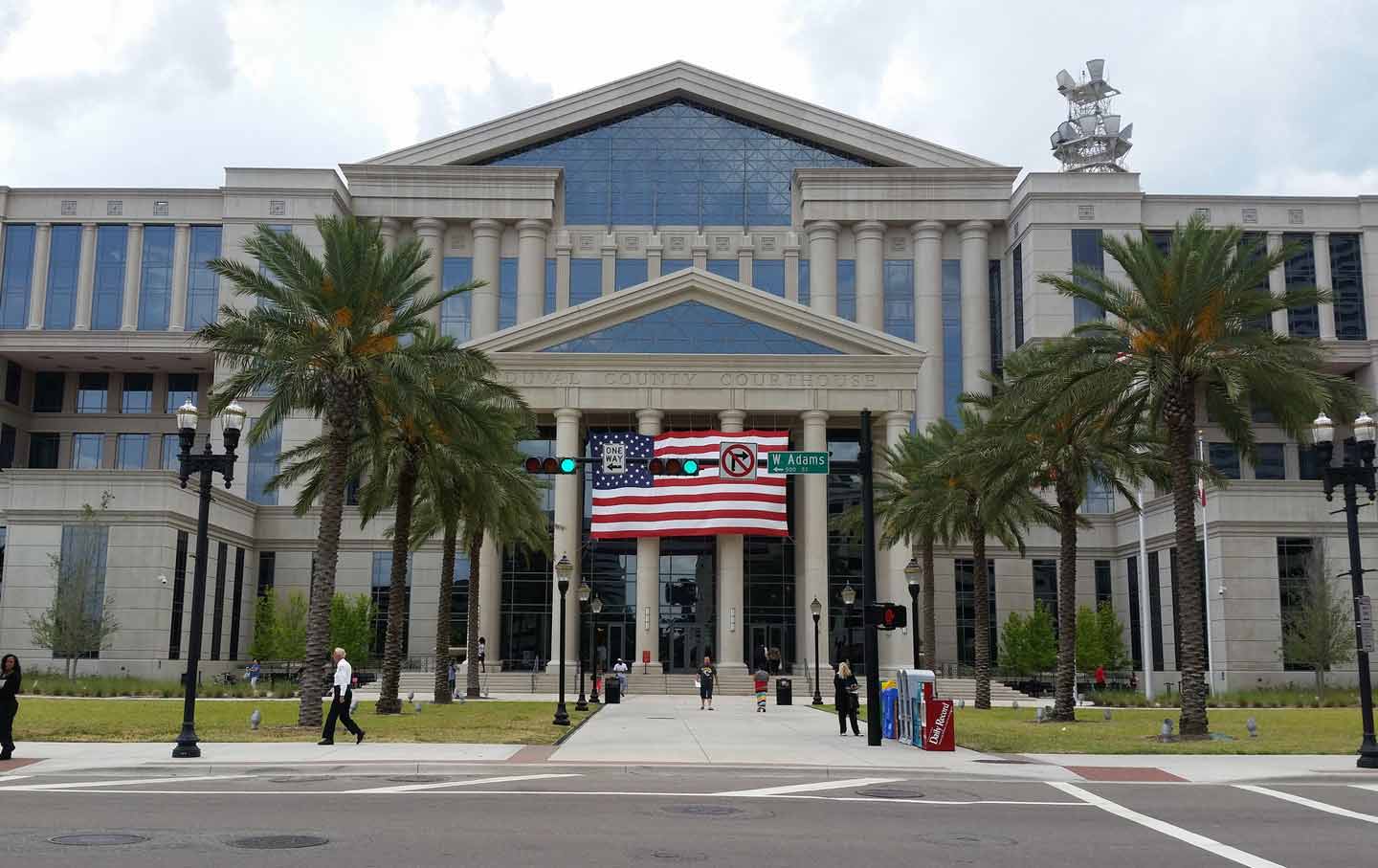 The Duval County Courthouse in Jacksonville, Florida. (CC By 2.0)

On a Tuesday morning in January of 2006, Larry Felton White Jr. came home from a convenience store and saw his next-door neighbor Kevin Drew standing outside, close to White’s lawn. White suspected at the time that Drew may have been involved in a burglary of his home and began arguing with him, and the fight turned physical. A chase ensued, and ended when White shot Drew three times.

Even though White, then age 31, was charged with second-degree murder—a charge that requires intent—he maintains that he shot Drew in self-defense. Drew and had punched White hard enough that his tooth landed in the front yard.

The day after the shooting, Dr. Margarita Arruza, then the Duval County medical examiner tasked with doing autopsies of all murder victims, autopsied Drew and made a finding, based on the pooling of the blood, that one of the gunshots was fired post-mortem. This fit with the prosecution’s theory that White had chased Drew down and shot him even as the man lay dying. London Kite, the same prosecutor who tried Marissa Alexander, argued that White pursued Drew with the intent to kill him, proven by the fact that he had shot Drew when he was already dead. White was convicted by a jury and sentenced to life. But his case was reversed on appeal because of an error in jury instructions.

In preparation for retrial, in May of 2010 Larry White’s new counsel deposed Dr. Arruza, and the deposition was unusual. Arruza seemed distant and forgetful. The prosecutor asked Arruza if she remembered the question being asked at one point, and appeared to go to great lengths to guide Arruza through the deposition, clarifying questions. Arruza stopped and seemed confused about her own notes. “I’m just getting confused,” she confesses at one point.

According to White, his attorneys made a comment to prosecutor London Kite because they were concerned about Arruza’s health. Kite was also present at the deposition. But nothing further came of the interaction.

A few months later, in September of that year, Pat McGuinness deposed Dr. Arruza for the case of Shantell Serrant. He noticed the same problems—Arruza seemed confused and disoriented, taking a break midway through to compose herself. The transcript includes several places where the reader can infer that Arruza appears to not remember details or misunderstands the question. At one point, Arruza is shown a skull.

Q. Where is the fracture?

Aruzza’s answer was followed by the prosecutor’s request for a break.

By December of 2010, at least some employees in the ME’s office appear to have known that Dr. Arruza was suffering from a form of dementia causing memory loss. According to e-mails located through a FOIA request, State Attorney Angela Corey’s office scheduled a meeting with Arruza in October. While the contents of the meeting aren’t known, following e-mails indicate that everyone agreed that Dr. Valerie Rao would take over the medical examiner’s office and begin to testify in place of Arruza. According to records, Arruza stopped conducting autopsies after September; Rao is still serving as chief medical examiner today.

The internal allegations about Dr. Arruza gained publicity when Wes White, an attorney who is running against Corey in the Republican primary for state’s attorney, presented the information in the form of a press release to media and called for a Department of Justice investigation. Wes White told the alt-publication Folio Weekly that he had noticed Arruza’s condition prior to her retirement and pointed it out to his supervisors. Folio also listed several instances where defense lawyers had noted Dr. Arruza’s decline. In 2010 and 2009, the two years before Arruza retired, she conducted 452 autopsies.

By the end of her tenure, colleagues seemed well aware of Dr. Arruza’s problems. In May 2010, a friend e-mailed a colleague in reference to an Orlando conference: “As for the meeting in Orlando. Have you considered that it may have something to do with Dr. Arruza’s mental state?”

Finally, Dr. Rao expressed some sense of anxiety about the departure of Dr. Arruza, writing in a January 30, 2011 e-mail: “Also the word substitute begs the question of why? And we do not want to be in the position of answering questions that we do not know the answers to.” It is not clear what Rao knew at this time, and the state attorney’s office argues that commenting on Dr. Arruza’s medical condition violates her privacy. She also wrote in April of 2012 about the “emergent situation” of 2010 and argued that she deserved a raise: “Let me tell you that this office was deficient in several categories.… This malpractice is no longer tolerated.”

In a June 2016, Corey defended her employment of Arruza in a 30-minute press conference in which she accused Wes White of pulling a “political stunt” and described the claims as “deplorable” and “despicable.” Corey argued that Arruza’s medical condition was taken care of quickly once it was known. “We did not know anything about the medical condition of Dr. Arruza,” she said. She explains that during her 2010 meeting with Arruza, the doctor “could not remember a couple of things.” Finally, Corey said that none of the attorneys who had spoken about Arruza to the press had mentioned any concerns to her during their work, reviewing cases by name, including that of Pat McGuinness. (Larry White’s case was not one of those mentioned.) She has stated that her office will not review any of the cases.

Failure to disclose information that an autopsy or medical examiner was compromised may constitute a violation of the Supreme Court’s rule in Brady v. Maryland. The rule of Brady requires that prosecutors affirmatively disclose information favorable to the defendant, including information that might be used to prove that a witness or document is unreliable. In her press conference, Corey misstated Brady as only evidence that “negates the guilt” of a defendant, which is a partial statement of the ABA standards for prosecutors. (The full standard is “evidence or information known to the prosecutor that tends to negate the guilt of the accused or mitigates the offense, and, in connection with sentencing, disclose to the defense and to the tribunal all unprivileged mitigating information known to the prosecutor” (emphasis added).

Certainly, mistakes made by forensic experts and labs are nothing new and are a cause for concern when they threaten to unravel a prosecutor’s case. For example, Sonja Farak, a crime-lab chemist in Massachusetts, has recently confessed to heavy drug use regularly on the job for nearly a decade, taking samples from the crime lab and lying to cover it up. According to her own testimony, she was such a heavy user of methamphetamine, both at morning and night, that she was forced to replenish the lab’s supply lest someone start asking questions. Another Boston crime-lab chemist, Annie Dookhan, was discovered recently to have falsified tens of thousands of reports for police. Missteps by crime-lab workers and medical examiners have to potential to affect thousands of cases. And in both cases there are allegations that prosecutors knew about these abuses and condoned them for fear of losing trials. Even so, in both the case of Farak and Dookhan, Massachusetts prosecutors have argued that they do not have an affirmative duty to notify defendants whose cases might be involved.

In White’s case, his new attorneys also hired an independent expert, Dr. Ronald K. Wright, to examine Arruza’s report for the second trial. Wright concluded that Arruza had been wrong about the so-called post-mortem shot. But, by this point, Dr. Arruza had retired, so Dr. Rao testified at White’s second trial where she agreed that Arruza had likely made a mistake. White’s counsel, however, still had questions about the medical examiner report.

White moved to have Arruza’s report excluded in July 2014, arguing that there was no one available to substantiate the contents. (Under the rules of evidence and procedure, a criminal defendant has the right to question the authenticity and veracity of documents entered into evidence. This means that White has a right to ask Arruza about the discrepancies in her report.) But the judge refused the motion, and prosecutors again said nothing about Arruza’s condition. Instead, London Kite changed her theory of the case and argued that Larry White had instead chased Kevin Drew and filed all three shots at the same time, not that he continued to fire after Drew was dead. Kite also agreed that Dr. Rao “contradicts the findings of Dr. Arruza,” meaning that none of the shots were made post mortem.

I spoke with Larry White on the phone, from where he is serving his life sentence in Blackwater River Correctional Facility in Florida, and he told me that he believed that the report should not have been entered into evidence if Dr. Arruza was not available to verify her work. Without the report, he believes, a jury will not find him guilty of intentional murder.

Thus far, Angela Corey’s office has not gone back through any old cases where Arruza’s work may have been compromised by her medical condition, even though there is evidence to show that prosecutors knew about Arruza’s condition. London Kite said nothing about the reason for Arruza’s absence in Larry White’s first or second trial, instead amending her theory of the case to fit Rao’s new opinion that Arruza’s report was flawed.

Were prosecutors trying to conceal Arruza’s condition for fear that it would place dozens of prosecutions in jeopardy?

On May 30, 2013, Rao was deposed in the trial of John Collins Jr., accused of fatally shooting a man named Johnny Lee Jones. Collins was represented by the public defender’s office. Arruza conducted the autopsy of Jones in late 2009, and the public defender asked Rao about Arruza’s mental state after Rao noted the lack of detail in the report.

Q: How long was Dr. Arruza sick before she left?

Q: Did you ever notice anything?

As for Larry White, he is serving a life sentence for second-degree murder, but remains hopeful about his appeal. Spending his time in the law library, he’s found case after case supporting the argument that Arruza’s original autopsy should not be admissible, since she is not available to testify. He is just one of many people whose fates depend on whether Corey’s office will review cases where Arruza’s work may have been flawed.