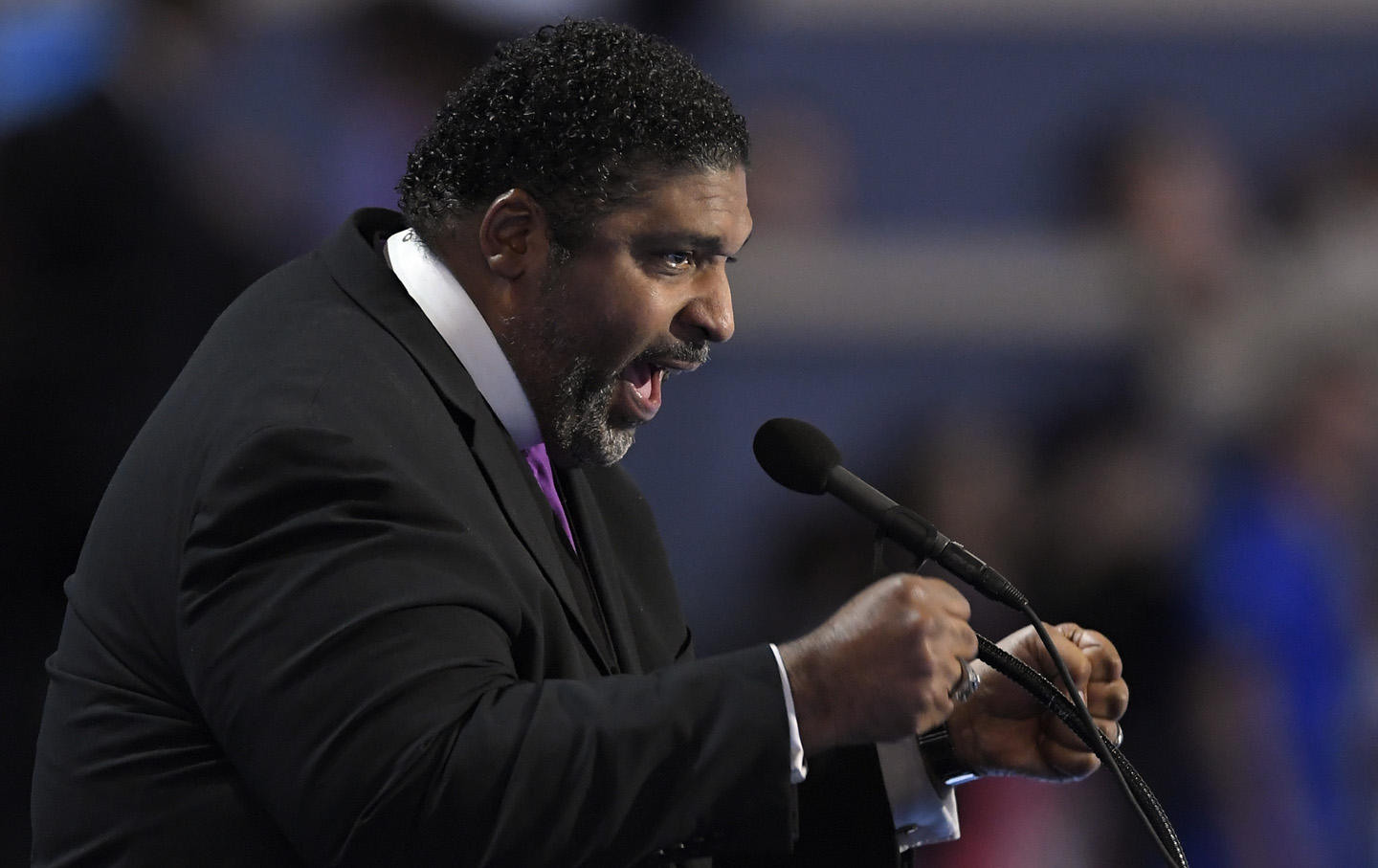 Nation readers are well acquainted with Dr. Rev. William Barber II, this magazine’s civil-rights correspondent, but most Americans have never heard of him. Last night was his coming-out party, when he brought down the house with an incredible speech at the DNC just an hour before Hillary Clinton took the stage.

As the leader of the North Carolina NAACP and the Moral Monday movement, Barber is leading a multi-racial and multi-issue struggle for racial and social justice that the South hasn’t seen since the 1960s. He’s been traveling the nation in recent months calling for a moral revival—similar to the “revolution of values” that Martin Luther King Jr. once preached—and he distilled that message in a barn-burning 10-minute speech last night.

Barber is one of the most gifted organizers and orators in the country today. As an organizer, he’s showed the power of civil disobedience and nonviolent direct action to mobilize a broad coalition against shameful policies like HB2 and the country’s worst voting restrictions in North Carolina. As an orator, he’s reclaimed the language of faith from bigots like Pat Robertson and Jerry Falwell.

“In my heart, I’m troubled and I’m worried about the way faith is cynically used by some to serve hate, fear, racism, and greed,” Barber said last night. “Jesus, a brown-skinned Palestinian Jew, called us to preach good news to the poor, the broken, and the bruised and all those who are made to feel unaccepted.”

Most powerfully, he’s framed fights for dignity and social justice in moral, not partisan, terms. This was the key section of his speech:

When we develop tax and trade policies that no longer funnel our prosperity to the wealthy few, we are reviving the heart of our democracy. When we hear the legitimate discontent of Black Lives Matter we come together to renew justice in our criminal justice system, we are embracing our deepest moral values and reviving the heart of our democracy.

When we love the Jewish child and the Palestinian child, the Muslim and the Christian and the Hindu and the Buddhist and those who have no faith but they love this nation, we are reviving the heart of our democracy.

When we fight for peace and when we resist the proliferation of military style weapons on our street, and when we stand against the anti-democratic stronghold of the NRA, we are reviving the heart of our democracy.

I was surprised to see Barber speak at the DNC. He’s rarely endorsed candidates and been careful not to get too close to the Democratic Party, which he’s also taken on over the years. So it was great to see the Clinton campaign—known for its caution and carefulness—give a huge platform to a leader who is so bold and honest.

“In times like these, we have to make some decisions and I might not normally be here as a preacher as an individual, but when I hear Hillary’s voice and her positions, I hear and I know that she is working to embrace our deepest moral values and we should embrace her,” Barber said. “But let me be clear, let me be clear, she, nor any person can do it alone. The watchword of the democracy and the watchword of faith is we. The heart of our democracy is on the line this November and beyond.”

I asked Barber this morning why he spoke at the DNC. He told me, “I didn’t ask to speak or seek to speak. We tried to deliver our higher ground moral declaration to the RNC—they refused to meet with us. We did deliver it to the DNC.

“I prayed about if the opportunity came [to speak at the DNC], I might consider it, in light of this political idolatry that Trump represents. These are times that try men and womens’ souls. We have not heard the type of things we’ve heard from Trump since George Wallace in 1968.

“Sometimes you have to take a personal stand…. I made it clear I wasn’t going to speak unless I had the freedom to say what I believed.”

The issues Barber raised in his speech, like the fight for voting rights, have often been at the fringes of the presidential campaign, but deserve to be at the center. His speech was a hopeful sign that the struggle for racial, social, and economic justice will be defining issues in 2016.