The pundits were certain: Doug Jones was not going to become a senator from Alabama if he kept talking about abortion. It didn’t matter that his opponent was credibly accused of being a pedophile, because voters just couldn’t pull the lever for a pro-choice candidate. At Politico, for example, Michael Wear wrote that Jones’s supposedly “extreme” position on abortion would turn away evangelical voters and that he was “going to have to tone down his rhetoric.”1

Jones won because many of our conventional narratives about abortion are flawed. One of the most persistent myths in politics is that Democrats should trade away reproductive rights in order to win over the largely mythical moderate voter. While Americans’ views on abortion are complex and multi-faceted, in the final analysis abortion choice is quite popular across the nation.2

For proof, we can start with the American National Elections Studies 2016 survey, which offered respondents a range of options:3 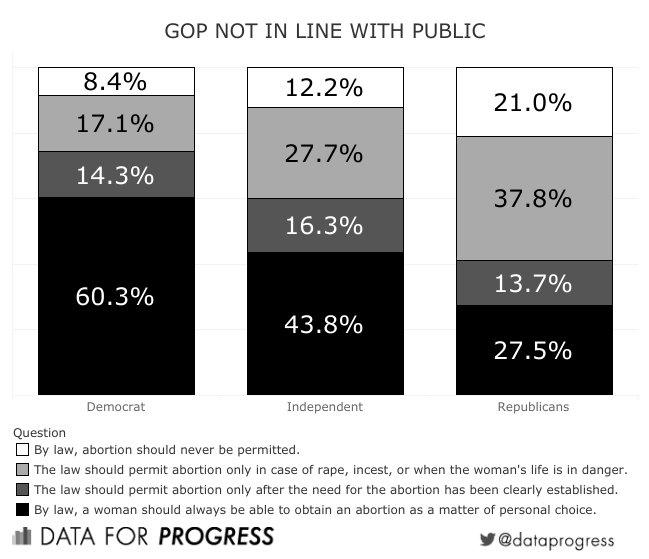 The 2016 Cooperative Congressional Election Studies survey also asked respondents a series of questions about abortion. One option was, “Always allow a woman to obtain an abortion as a matter of choice,” which garnered support from 58 percent of the public, while the full abortion-ban option was endorsed by only 16 percent of respondents.5

In both surveys, we see that the pro-choice option garners around 61 percent of the general public, despite somewhat different wording. That fits with polling from Pew, which shows that 57 percent of Americans say abortion should be legal in all or most cases. It’s fair to say a durable majority of Americans are in a broad pro-choice camp, though the exact extent varies by question. It’s also clear that very, very few Americans support a full abortion ban, which is the preferred policy of the Republican Party.6

But, you might say, that doesn’t answer the Doug Jones question—sure, a broad majority of Americans may support abortion rights, but what about the people in deep-red states? To analyze the geography of support for abortion, my think tank Data for Progress used a technique called multilevel regression and post-stratification. MRP has been validated and been shown to generate reliable estimates of state-level public opinion using a national sample. And we found that in 40 states and the District of Columbia, a majority of adults agree with that the law should “always allow a woman to obtain an abortion as a matter of choice.”7

This is true even in the Deep South. John Logan Ray, a senior adviser at Data for Progress, analyzed survey data from Arkansas and found that, “While Arkansas overall is more conservative than much of the country, across-the-board opposition to abortion remains an extreme, outlier position even there. My analysis suggests that, across the state’s Congressional and legislative districts, seventy to eighty percent of active voters approve of access to abortion in at least some circumstances.”8

This interactive chart, sampled below, shows support for abortion choice, an abortion ban, the Hyde Amendment that bans federal funds from being used on abortion services, and the question of whether employers should be able to decline abortion coverage (see the wording here). These estimates are similar to the estimates generated independently by political scientist Christopher Skovron.9 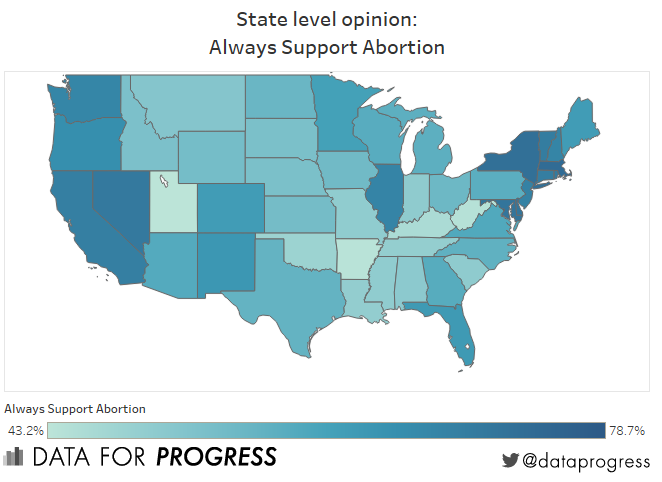 Even after he won, some observers asserted that Jones prevailed in spite of his pro-choice stances. But polling provided to me by The Insurrection, a progressive digital strategy firm, suggests a different conclusion: Women’s reproductive health was the top-testing pro-Jones message for white Democrats. (It was second-highest for African Americans, behind Jones’s prosecution of the 1963 KKK church bombers.) In addition, the polling found that ensuring access to health care was actually more powerful when framed in terms of women and reproductive care than in terms of rural health-care access and opioid treatment.11

Overall, this means Democrats who tailor their abortion positions in order to appeal to anti-choice voters are probably making a grievous strategic mistake—they are trying to win voters that will never pull the lever for them anyway, while de-motivating people who find abortion rights to be a compelling message.13

This cuts against Beltway wisdom, but many Democratic candidates actually get it. In Georgia’s Sixth Congressional District, which has a strong Republican lean (it was previously represented by Newt Gingrich and Tom Price), the Democratic nominee, Lucy McBath, doesn’t think the GOP lean precludes an open discussion about reproductive choice. “I make no excuses: I’m fully committed to protecting reproductive rights for women. It does not matter how ‘Democratic’ or ‘Republican’ your district or state is,” she said. “Women from all walks of life rely on essential family planning services from institutions like Planned Parenthood.”14

Democrats shouldn’t be afraid to embrace abortion rights in majority-minority districts either—they should ignore the offensive warnings from pundits that people of color are uniquely intolerant of gay people and abortion. There is little support for this idea in the data. Turning again to the ANES survey, we see that people of color are as supportive of choice as white voters. Fifty-nine percent of whites are on the pro-choice side of the spectrum, with 44 percent “always” supporting abortion, while 60 percent of minority voters fall into the pro-choice category, with 46 percent always supporting abortion rights. African Americans are the group most supportive of abortion, followed by Asian Americans. Latinos are somewhat less supportive of abortion, though data show that second- and third-generation Latinos are more supportive of abortion rights.15

What may be confusing pundits and party strategists is that Republican have pursued maximalist anti-choice policies with tremendous success. The GOP has managed to make abortion functionally banned in numerous American states, despite polling that shows increasing support for abortion rights. But that can also be seen in a positive light: If Democrats widely embrace abortion rights and also pursue maximalist, pro-choice positions, just imagine what they can achieve with broad public support actually behind them.17