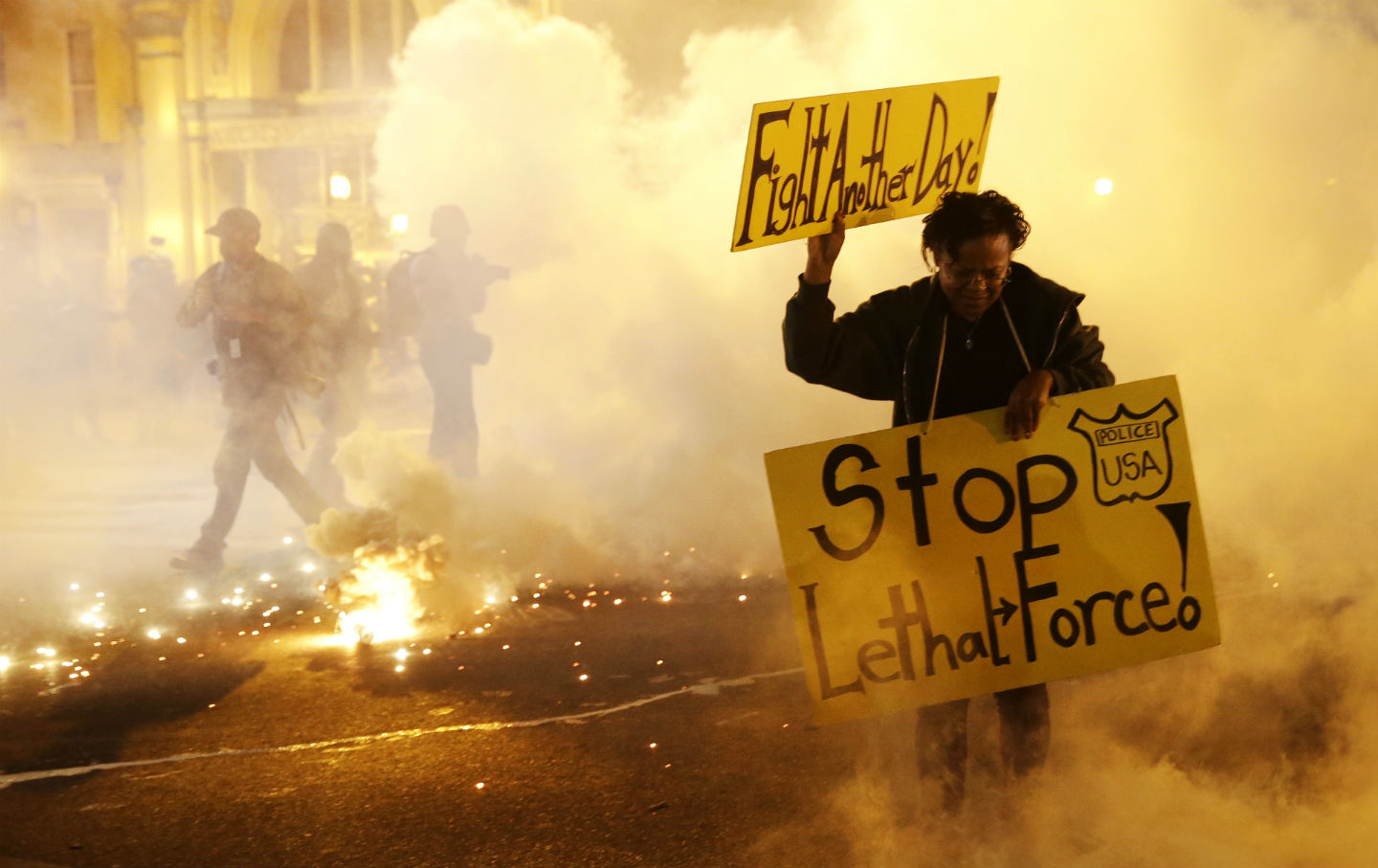 What strikes me most about the recent videos of black men dying and dying and dying is the repetition. They all seem familiar—as in: We’ve heard it before, and before, and then well before even that. The scenes splashed across the news have become almost ritualistic, prayerful; they have a narrative potency that seems to move of its own accord, an agency exceeding that of the humans involved, whether police or suspects, victims or bystanders. We all know the words, we all sing along. In North Charleston, South Carolina, the death of Walter Scott began with a litany like so many before it: He reached for my weapon, a struggle ensued, I feared for my life, the weapon discharged. Amen.

The counternarrative, the recall and response, was provided by a passerby who captured the now-viral video of the killing on his cellphone. That, too, was a memory remembered, a chorus we knew before we knew: He was running away. He was shot in the back. He was unarmed. The weapon was planted. Repeat con affetto.

As Baltimore is rocked in the wake of Freddie Gray’s death, our collective riot-song has been cranked up to full volume: They’re out of control! They’re wild animals! They’re burning down their own neighborhood! No wonder the police have to kill them! And in complex counterpoint, the dirge of mysterious-death-while-in-custody: No justice, no peace! interlaced with the percussive bass line of A thorough investigation will be undertaken.

Sigmund Freud thought of repetition as a source of the uncanny—something repressed that, when revealed, violates some affective order. As he used the word, “uncanny” meant the feeling of looking at something that is familiar or intimate yet simultaneously new or estranged. He related it to being “robbed of one’s eyes.”

Freddie Gray was arrested, according to police, because they “made eye contact” with him in the suggestive territory of “a known drug area.” Eyes thus caught, he ran. Police gave hot pursuit.

In some instances, the uncanny familiarity may not be lurking too far beneath the surface. In Baltimore, necks have been broken before by the police “rough-riding” arrestees: hog-tying them, putting them in the back of a van with no restraints, then intentionally veering at high speed. At one point it was called screen testing, because it would cause shackled prisoners to smash into the screen dividing the front and back of the van. In 2005, Dondi Johnson Sr. died after such a ride, suffering a catastrophic spinal-cord injury much like Freddie Gray’s. And in 2004, Jeffrey Alston was left paralyzed from the neck down, an injury also sustained in the back of a police van.

Freud’s image of stolen eyes haunts me: The circular looping of belated recognition and regret seems a shared impairment, a kind of socio-visual agnosia.

I made up that term, “socio-visual agnosia.” There is an actual neurological condition called visual agnosia. The patient in Oliver Sacks’ famous essay “The Man Who Mistook His Wife for a Hat” suffered from it. It’s not a really a vision problem at all, but a neural disorder of perception that produces an inability to recognize objects or faces, or to identify a thing by its shape. So I’m taking a bit of a liberty here, deploying it as a metaphor for our collective hermeneutic disorder. Consider the man who mistook his gun for a Taser.

Robert Bates is the 73-year-old insurance agent whose longtime friend, Stanley Glanz, is the sheriff of Tulsa County, Oklahoma. Bates has paid for vacations for the top brass, as well as equipment for the police department. It seemed only polite to invite him along to test those goodies out. So when an unarmed black man named Eric Harris tried to make a run for it during a thoroughly bungled sting, Robert Bates—thrill-seeking insurance agent, volunteer hanger-on—reached for his Taser and pulled out his gun.

It was an accident, he said. According to the libretto, he was then supposed to sing about it being the worst day of his life. But Bates broke the rhythm of the score by describing it as the second-worst thing that had happened in his life, after suffering cancer. “I’m sorry,” he was recorded saying as he stood over the dying Harris. It was not the worst day of his life.

Pay-to-play has quite a genealogy, from fugitive slave hunts to more recent expeditions. As recently as the 1990s, Jerry Hodge, then vice chairman of the Texas Board of Criminal Justice, would invite his pals down to the prison and engage in a longstanding tradition among officials: to wit, a staged hunt of inmates, ostensibly as part of an exercise to train tracking dogs. Hodge and friends would enjoy a nice leisurely lunch, while an inmate, called a "dog boy,” was given a head start of a few hours to crisscross eight square miles of the prison compound. Then the party of official guests “mounted horses, assembled eight or nine dogs and rode off after the designated ‘escapee.’” After the exercise, there was a sumptuous barbecue, and participants received jackets embroidered with the words “The Ultimate Hunt.”

The Ultimate Hunt.  It anticipates, it hungers for, it so wants a reality show that should have been. It is as though to fill in that subjunctive mood, perhaps, that, more recently, Arizona’s Sheriff Joe Arpaio infamously offered the actor Steven Seagal a tank with which to break up a coven of animal cruelty, a conspiracy of cockfighters, a dangerous den of rioting roosters, the original cage-fighters—right there in Maricopa County. Sheriff Arpaio needed good publicity, it seems. And Seagal had a reality show and a TV crew at hand, which filmed him driving said tank, along with a SWAT team and a bomb-disposal robot, through the front wall of the poultry-harboring residence, crushing the family’s new puppy. The warrior birds were taken into custody and killed.

If you’ve heard about this incident, it was probably because there was much discussion about whether killing the puppy was absolutely necessary. Killing the cocks to save them from cruelty lent a touch of irony to the endeavor.

It is a quandary sometimes, how to save the animals from themselves.

The front page of The New York Times’s April 21, 2015, edition featured a story estimating that approximately 1.5 million black men are absent from daily life in the United States, mostly through incarceration or early death. This has created a lifelong gender gap that is not found among white Americans. These men are “missing,” said the article, invisible and unmourned. This plague of disappearing is a long-term ritual, in a song cycle of eternal return. We know the words. But this perpetual erasure “robs the eyes” of all of us. It blinds our polity. It sacrifices worlds.