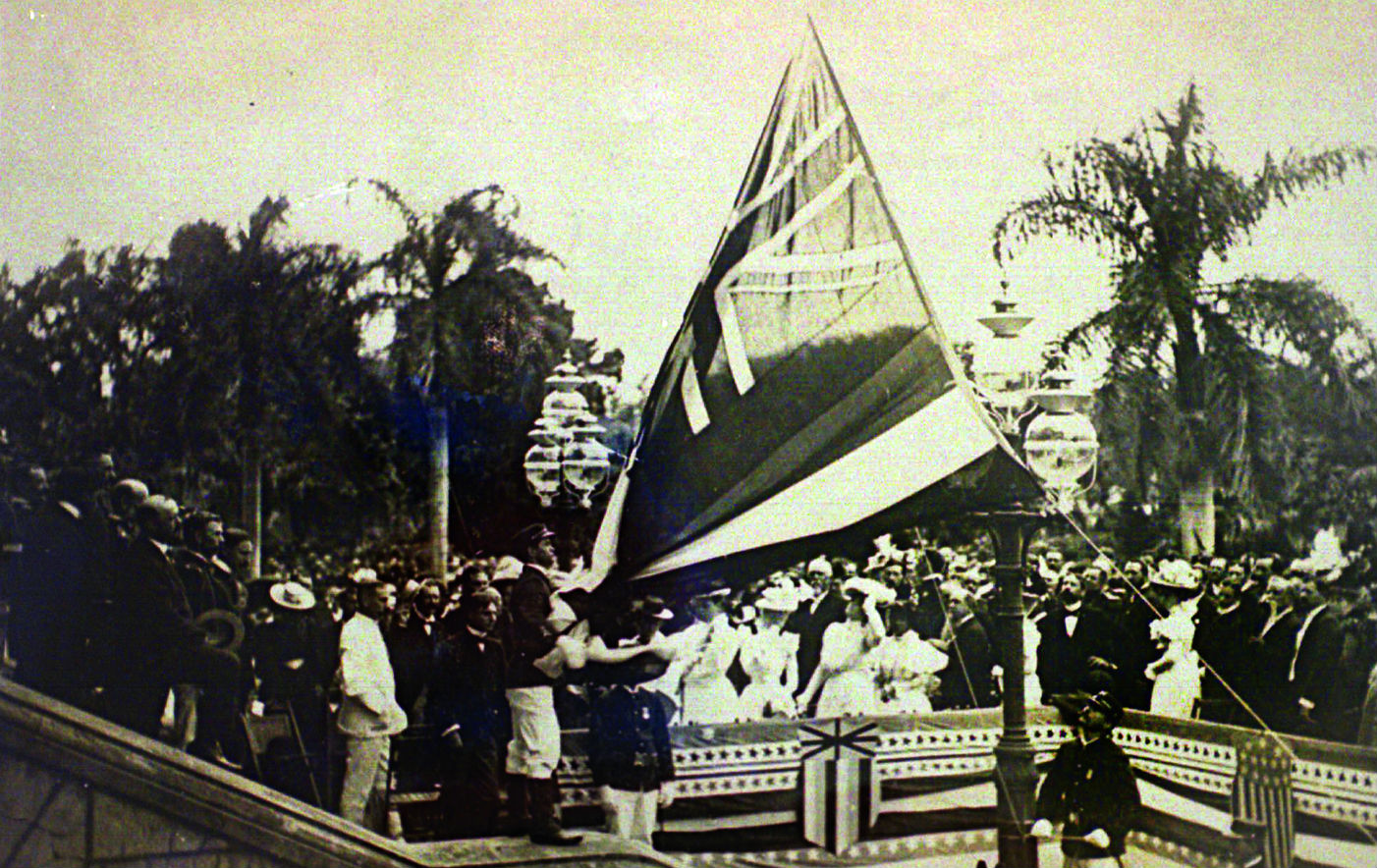 Annexation: The Republic of Hawaii’s flag is removed from ‘Iolani Palace in Honolulu on August 12, 1898. (AP Photo / Hawaii State Archive)

The feature of the proposed annexation of Hawaii which ought to excite the most comment and the greatest repugnance has received scarcely any attention, and among the advocates of annexation none at all. This is the fact that the American republic, based upon the doctrine that all governments derive their just powers from the consent of the governed, proposes to change the government of a distant country without asking the consent of the governed in any way whatever. Does this betoken a change in ourselves? So it would seem.

That Senator Morgan of Alabama should argue this question as though the people of Hawaii have no rights which white men are bound to respect, is not to be wondered at. He is an ex-slave-holder. He belongs to a class who are in office by virtue of suppressing the votes of the black men and also of such whites as do not vote their ticket. Free suffrage has been abolished in Alabama and in several other Southern States, and one of the most solemn questions that confront the American public today is how to purify the ballot and secure a fair count in those States.

They began with cheating the negro. They have ended by cheating each other. It is easy to understand how men who believe in this system should ride rough-shod over the rights of the Hawaiians, how they should treat the question of annexation as though those rights were non-existent, and talk about England and Japan, and naval power in the Pacific, and every other conceivable thing except the foundation principle of free government. Being accustomed to trample upon it at home, they cannot be expected to see its virtues in the distant Pacific. But that the liberty-loving North, and especially the Republican party, which fought a war to establish this principle, and contended for thirty years after the war to maintain it, should now join in trampling upon it, is something that would not have been believed by any former generation of Americans.

However improbable it seems today, the annexation of the Kingdom of Hawaii was the central American foreign-policy issue of its time. In late 1897, Queen Lili’uokalani, the monarch deposed by American-led businessmen in 1893, was in Washington, DC, where, together with a delegation of native leaders, she presented petitions against the pending annexation treaty between the United States and Hawaii to members of Congress who opposed overseas expansion. In the fourth year of her protest against the American role in the coup, the queen had already experienced the feints and dodges of American politics and diplomacy many times, but there was still hope that her country’s independence might be preserved.

In the past few months, Hawaiians had come together in passionate gatherings to hear their leaders cry out that annexation would be like being “buried alive.” “We…earnestly protest against the annexation of the…Hawaiian islands to the…United States of America in any form or shape,” their petitions read. The 38,000 signatures reflected the will of the vast majority of native Hawaiians alive at the time. Perhaps with the able Hawaiian representatives delivering their case in person, enough opinions would be swayed to consolidate the position of the anti-imperialist forces so that the movement toward annexation could be stopped.

But that is not how it happened, of course. When the Hawaiians left Washington in the winter of 1898, it appeared that the two-thirds Senate majority required to annex the islands by treaty could not be found. They returned home relieved—only to find the next summer that by the devious tactic of a joint congressional resolution requiring only a simple majority in both houses, Hawaii had nonetheless become “ours,” as it has been in one form or another ever since. When it became the fiftieth state in 1959, the question “Shall Hawaii immediately be admitted into the Union as a State?”—as opposed to remaining a territory—was the only option on the ballot.

What changed the fate not only of Hawaii but of the United States and, indeed, the world? The Spanish-American War. Before our 1898 intervention in the Cuban war for independence from Spain, we were a republic. After the Treaty of Paris, which ended the war and brought some Spanish territories under US control, we were an empire. Before, we were a single people whose values and institutions were applicable mainly to ourselves. After, we were a collection of diverse unwilling peoples on whose histories and aspirations those values and institutions would have to be imposed. In addition to Hawaii, the Philippines, Puerto Rico and Guam were now also “ours.”

The consequences of this shift for the tenor of public life are well captured in two Nation editorials. “Hawaiian Annexation,” published on November 25, 1897, is about principles, particularly the right of a people to the government of its own choosing. Lofty, rhetorical and a little abstract, it is a sermon against the hypocrisy that enabled annexationists to ignore an inconvenient truth: “that the American republic, based upon the doctrine that all governments derive their just powers from the consent of the governed, proposes to change the government of a distant country without asking the consent of the governed in any way whatever.”

“The Situation in the Philippines,” which ran on August 16, 1900, seems the more telling today. The later editorial is about power: what happens when you try to force your government on people who prefer their own. It is urgent, particular, not part of the periodicals’ gentlemanly wars but rather the real thing: a report from a new grim world. Based not on the ruminations of a writer in New York but on the observations of a correspondent in the field, the editorial gives the lie to the official view that “the situation is that of tolerably complete conquest,” noting: “The armed natives are now called…’robbers,’ and ‘bandits. There are no more battles, but nearly every day there are fights in which the Americans lose one or more, and the natives one hundred or more. After one of these fights a report is issued that a band of robbers has been destroyed; but before many days another fight occurs in the same region.” We have been hearing such news ever since.

We have been hearing, too, about torture. Its use in the Philippines was so well known that an illustration on the cover of Life showed US soldiers, surrounded by watchful Europeans, subduing a Filipino with a water bucket. “Those pious Yankees can’t throw stones at us anymore,” the caption read. With the Philippine dead estimated at 30,000 at the time of the writing—200,000 people died from associated causes by the end—it would seem that the Hawaiians, who were merely “annexed,” got off lightly, but they too were watchful. The acquisition of Hawaii was accomplished through politics, not through arms, but the same men who overthrew the kingdom in the first place were now running it on behalf of the United States. “[W]e are surprised that the ‘water cure’ has not yet been advocated for the Hawaiian Islands,” commented a native newspaper, only in part facetiously. “Perhaps [the ruling clique] ought to see to it that during the next electoral campaign the ‘water cure’ incidental to the ‘benevolent assimilation’ policy be administered to the natives who refuse to vote the white-missionary ticket.”

Surprising, too, is that despite the Nation editors’ consistent opposition to empire while it was looming, they seem to have underestimated its implications when it became fact. Bursting with pride over a period that included a congressional investigation of the Philippine war and the disciplining of some of the blood-lusty officers who carried out the atrocities, the chipper 1902 editorial “The Pesky Anti-Imperialist” attributes these brief political victories to the anti-imperialist outcry, but offers no intimations of the larger moral casualties ahead. The movement succeeded because “anti-Imperialism is only another name for old-fashioned Americanism,” the editorial maintains. Unwilling to “distinguish between the flag and the principles which first set the flag flying,” the anti-imperialist American has reasserted the fundamental ideals of the Declaration of Independence, and in the end his cause has triumphed.

It is hard not to envy those pesky anti-imperialists, so much closer than we are today to the spirit and even the lineage of the founding fathers. The senator who received the Hawaiian petitions from Queen Lili’uokalani had six forebears who fought at Concord, and one who actually signed the Declaration of Independence. When the editorialist invoked John Quincy Adams, he could be sure that the reader would recall Adams’s warning that if the United States became involved in foreign intrigues, “the fundamental maxims of her policy would insensibly change from liberty to force.” And the optimism! There is not even any particular hurry. Remembering “that the history of success is the history of minorities,” the anti-imperialist “is content to bide his time, knowing that the road of popular persuasion is a long one, though sure in the end.” To that we can only say: “Ouch!”

When The Nation’s editors defined “anti-imperialism” as synonymous with “Americanism,” they neglected to notice that not only “Americanism” but America itself had already forever changed.