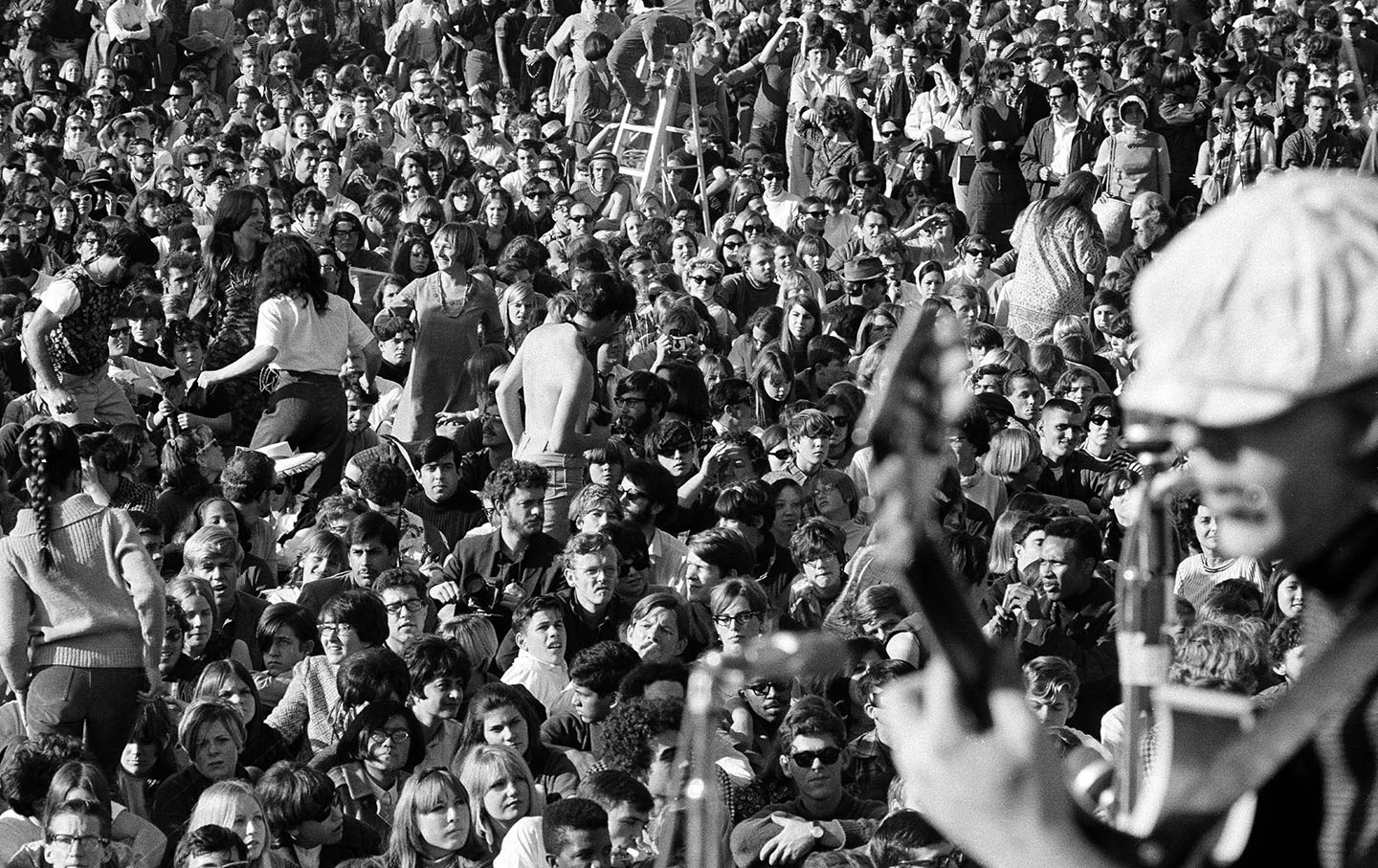 On Saturday January 14, it will be exactly a half-century since the Human Be-In at San Francisco’s Golden Gate Park in 1967. Even at the time there were radicals who thought that hippie energy was a distraction from “serious” political work. It is weird and striking that the Trump inauguration occurs six days after the 50th anniversary of one of the most famous public manifestations of hippie culture. Some of the same questions that were debated then seem oddly relevant today.1

One need not disregard the uniquely disturbing elements overshadowing America in 2017 to also acknowledge the darkness we faced in other eras. Mystics who felt that love was indispensable to a better world in 1967 faced a violent, reactionary establishment. Ronald Reagan, outspokenly hostile to both hippies and protesters, had been elected Governor of California eight weeks earlier. Millions of young men were subject to the military draft. There was no such thing as legal pot. (Timothy Leary had a 30-year jail sentence hanging over him). Two Be-In speakers, playwright Michael McClure and poet Lenore Kandel, had been recently busted for obscenity. 2

The Forgotten Power of the Vietnam Peace Movement

Lennon’s Last Interview: ‘The Sixties Showed Us the Possibility’

In 1965–66 the Haight-Ashbury neighborhood of San Francisco had been a magnet for artists, psychedelic explorers, and other cultural rebels who rejected various aspects of the Western world. The big deal about the Be-In was the sheer quantity of people who suddenly identified with hippies. More than 30,000 gathered in Golden Gate Park, five times more than had shown up for the biggest counterculture celebrations up until that point. A few months later, on Easter Sunday, be-ins in both New York and Los Angeles would draw crowds of a similar size. To paraphrase Bob Dylan, something was happening and a lot of the straight world didn’t know what it was.3

Much of what is called “the sixties” was the result of the unique intersection of esoteric ideas that were previously the province of small, avant-garde subcultures with mass media catering to the baby-boom generation. For a moment, bohemia was pop. The Be-In set the stage for the “Summer of Love,” which in turn attracted so much sensationalist and exploitative coverage that by the end of 1967 most hip symbols were fodder for sitcoms. By June, “Hippies” would be the subject of a cover story in Time magazine. In October, a “Death of Hippie” ceremony in Haight-Ashbury was organized by counterculture elders.4

In October of 1966, LSD became illegal in the state of California. In response, the editors of the psychedelic newspaper The Oracle created the Be-In with Richard Alpert, who had been fired from Harvard, along with Leary, for unauthorized psychedelic research. The name was a pun based on the words “human being” and a goof on the political “sit-ins” and “teach-ins.” (By the end of the year Hollywood coopted the gimmick with TV comedy show called Laugh-In).5

Allen Ginsberg called the Be-In “the last purely idealistic hippie event.” For a brief period, “peace and love” was an unironic shorthand for a belief system vividly distinct from mainstream Western values.6

The event’s subtitle was “A Gathering of the Tribes.” These included mystics who were into Eastern and Native American spirituality as well as psychedelics; young political radicals focused on the Vietnam War; old-school Marxists; anti-communist pacifists; a vibrant new crop of rock musicians (“Our cardinal rule is ‘Don’t lay your trip on anyone else,’” said Grateful Dead manager Rock Scully); Hell’s Angels (a year earlier some members of the motorcycle gang had attacked antiwar protesters, but for the moment, many local Angels had mellowed after taking LSD with Ginsberg and Ken Kesey); and an anarchistic theatrical group called The Diggers who give away hundreds of free meals a week, and who were withering critics of almost everyone else in the hip scene.7

At a planning meeting a radical asked the Oracle guys what their demands were going to be. The hippies laughed. “Man, there are no demands—it’s a Be-In,” one replied. Nonetheless it was agreed that antiwar leader Jerry Rubin would speak at the event. To forestall criticism from the Diggers, Owsley the local psychedelic chemist donated thousands of “white lightning” LSD tabs and hundreds of turkey sandwiches for Diggers to give away to attendees.8

Ginsberg saw the Be-In as a “mela,” or spiritual celebration. He promised “a gathering together of younger people aware of the planetary fate that we are all sitting in the middle of, imbued with new consciousness, and desiring of a new kind of society involving prayer, music, and spiritual life together rather than competition, acquisition, and war.”9

The poet began the program with Hindu chants and later danced ecstatically to the Grateful Dead’s rendition of “Dancing In The Street.” The much-photographed crowd included barefoot young women in madras saris or mini skirts, and long-haired men in Edwardian jackets, velvet cloaks, and stovepipe hats. A few wore all white, but thousands of the newcomers to the hippie world wouldn’t have looked out of place at a folk festival.10

Rubin’s speech, which focused on the imprisonment of protesters, was so strident that the Dead’s Jerry Garcia later cited it as a primary reason he subsequently avoided movement politics. (Others were into both LSD and SDS. Ginsberg withheld a percentage of his taxes as a protest against the Vietnam War. In retaliation, the IRS seized $182.71 from his Howl royalties).11

Timothy Leary intoned “Tune in, turn on, drop out,” a slogan that had recently emerged from a lunch with media philosopher Marshall McLuhan. Ginsberg later complained about the words “drop out,” which he thought were confusing to young people and disingenuous for hip celebrities. Leary cheerfully agreed to change it, but the die had already been cast: The phrase became what now would be called a meme.12

In April, when Martin Luther King Jr. came out against the war, an enraged President Johnson gave the FBI a green light to sabotage the civil-rights and anti-war movements. James Comey has a long way to go before he would equal the mendacity of his sixties counterpart, J. Edgar Hoover. The chants of “Lock her up!” directed at Hillary Clinton were disgusting, but John Kennedy, Robert Kennedy, and Martin Luther King were actually killed.13

Then, as now, many in the political classes, both radical and liberal, looked down on supposedly impractical efforts to change consciousness. Yet computer models of the voting public in 2017 generated by the best and brightest political consultants were no more effective than 10-point programs or macho repetitions of the word “resistance” were in 1967. It may be that a hybrid of mysterious currents in the human spirit and linear expertise is more pragmatic than either approach in isolation.14

Even in 1967 Richard Alpert worried about “the problem of coming down.” Later renamed Ram Dass, he mused after the Trump election, “I think that what’s happening now is a direct reaction from the sixties.” He was alluding to the problem that people identifying as members of a “tribe” (or even a cluster of them) don’t always extend compassion and love to non-tribe members. Condescension is neither cool nor effective.15

Old posters and music evoke nostalgia. But nostalgia for what? Prior to the election, MSNBC’S Laurence O’Donnell noted that a Melania Trump speech was introduced by a version of “Age of Aquarius” from Hair, the musical directly inspired by the Be-In. The lyrics glorify “sympathy and trust abounding, no more falsehoods and derisions.” Was Mrs. Trump mocking idealism or trying to associate with it?16

Counterculture infighting in the sixties was the syndrome that caused Che Guevera to quip, “If you ask the American left to form a firing squad, they get into a circle.” Is it plausible, 50 years after the Be-In, that Bernie Sanders and Hillary Clinton supporters, mystics, progressive rationalists, and atheists could all work together? For old hippies like me, the answer is a no-brainer. On a Facebook page called “The Hippies Were Right,” a photo was recently posted showing a bearded man holding a protest sign that reads: “What Do We Want? Time Travel. When Do We Want It? It’s Irrelevant.” Peace and love transcend time.