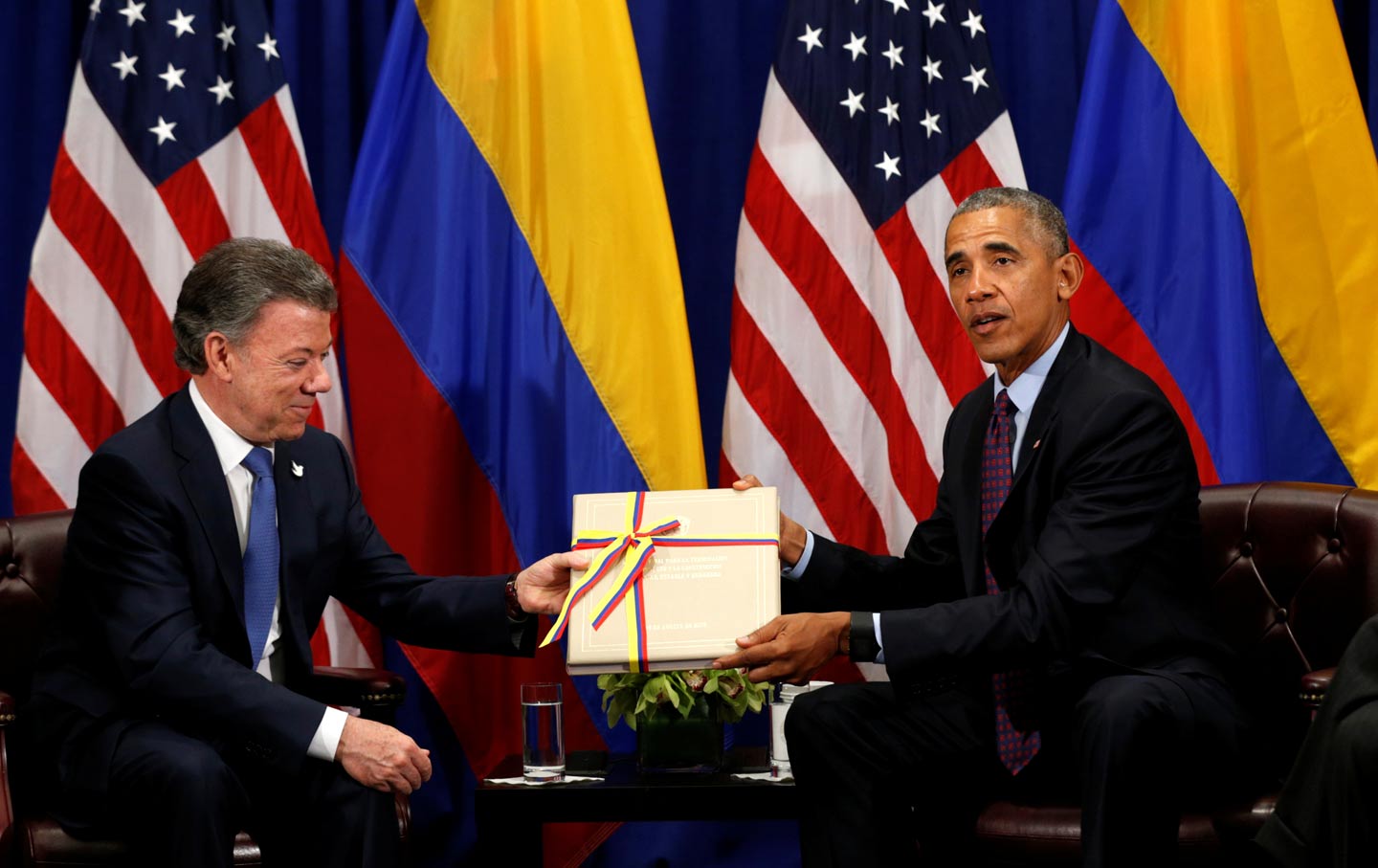 Some success. With peace within reach in Colombia—on October 2, Colombians will vote on approving a historic treaty that would end the war with the FARC, one of the longest-running insurgences on the planet—politicians and opinion makers in the United States are holding up Plan Colombia as a modular success story, to be cut and pasted into other global hot spots. Hillary Clinton recently recommended that it be replicated in Honduras to fight crime: “I think we need to do more of a Colombian plan for Central America,” she said, when asked by Democracy Now!’s Juan González about her role in legitimizing Honduras’s 2009 coup, telling González to “remember what was going on in Colombia when first my husband and then followed by President Bush” were in office. “Now,” Clinton says, thanks to Plan Colombia, “we’re in the middle of peace talks.” And Shawn Snow, in Foreign Policy, thinks Plan Colombia can be franchised into Plan Afghanistan, to fight Islamist extremists.

Nick Miroff at The Washington Post has written a series of articles holding up Plan Colombia—which was put into place during the Bill Clinton administration and passed more than $10 billion to Colombian security forces—as a victory, saying that it “is widely credited with helping the government turn the tide against the FARC.”

A more recent essay has Miroff extending the idea that Plan Colombia is responsible for the current peace: “After 16 years and $10 billion, the once-controversial security aid package is celebrated today by many Republicans and Democrats in Congress as one of the top U.S. foreign policy achievements of the 21st century. Colombia, a fast-growing nation of 50 million, has become the leading U.S. ally in South America and a major free-trade partner.”

The U.S. intervention tipped the war. It delivered a shot of confidence to Colombia’s institutions, particularly its military. It gave the country a vast, sophisticated intelligence-gathering system to hunt the rebels, as well as the lethal hardware to strike them from the skies. By 2003, nearly 5,000 staff members and private contractors were working out of the American diplomatic compound in Bogota, making it the largest U.S. embassy in the world. [Emphasis added.] Once outmaneuvered and intimidated by the FARC, Colombian soldiers received the training and technology to confront the guerrillas head-on. With American Black Hawk helicopters, they learned to deploy quickly into rugged guerrilla terrain. They are widely viewed today as Latin America’s best-prepared and most professional military. The rebels were pushed back, deeper into the jungle, and faced increased desertions…

This touting of Plan Colombia turns schizophrenic two-thirds in, when Miroff suddenly prose-bombs his otherwise matter-of-fact report with a shocking paragraph: “With U.S. backing, the Colombian government launched a scorched-earth counteroffensive against the FARC’s rural strongholds after President Álvaro Uribe was elected in 2002. Government troops were often followed by right-wing militias that targeted suspected rebel sympathizers and massacred civilians. More Colombians were driven from their homes during the first stages of Plan Colombia than at any other time in the half-century conflict.”

Miroff then returns to selling the idea that Plan Colombia was a new kind of life-saving counterinsurgency, able to limit civilian casualties through the use of precise, pin-prick intelligence and weapons. “Precision munitions, which were also used to eliminate U.S. foes, such as insurgent leader Abu Musab al-Zarqawi, in Iraq, enabled the Colombian military to penetrate the dense jungle canopy and obliterate rebel encampments. American intelligence agents working with Colombian teams coordinated the strikes. Suddenly, FARC rebels could no longer gather in large groups, travel in long columns or spend more than a night or two in the same location. Most of the details about the aerial campaign remain classified. But William Brownfield, who served as U.S. ambassador to Colombia from 2007 to 2010, said it took a ‘strategic approach’ that ultimately saved lives.”

This is nonsense. Plan Colombia was a bloodbath; as is usually the case, the bipartisan celebration Miroff writes about is taking place on a mountain of corpses and a sea of misery. The billions of dollars provided by Washington basically turned the state, including its intelligence apparatus, over to the paramilitaries. Wrap your head around this number: 6,939,000. That’s the tally of Colombia’s internal refugees, the largest dispossessed population in the world, more than Syria and Iraq, driven off their lands largely by the military in that scorched-earth campaign Miroff mentions, or by settler-paramilitaries who took their property.

As to being the most “professional” military in Latin America, between 2002 and 2008—the heyday of Plan Colombia—the Colombian military executed at least 3,000 civilians, mostly poor peasants, then dressed them in rebel olive-green and posthumously armed them. Thus were created what in Colombia is known as “false positives,” which helped the military “boost combat statistics to prove that the government’s campaign against Colombia’s rebels was working.” If Bolivia’s army, or Venezuela’s military—considerably less “professional” and “precise” in Beltway opinion—did anything similar, the outrage in the US media and Congress would be deafening. As it was, you heard barely a peep about this carnage, which was not only funded by the United States, but carried out to justify continued funding.

Part of the growing mythology of Plan Colombia is that US military aid started with Bill Clinton around 2000. This is also nonsense. Colombia, in 1962, was included in the purview of John F. Kennedy’s “Special Group,” set up in the highest echelons of government to wage global counterinsurgency. Backed to the hilt with US dollars and training, the Colombian military began to attack Communist- and Liberal Party–allied peasant communities. For a while, it was Colombia, not Cuba, Guatemala or Chile, that seemed to be the American analog to what Washington was doing in Vietnam, Laos, and Cambodia, with counterinsurgent intelligence officers and Green Berets moving from one country to another. In 1964, the US-trained Colombian armed forces enacted a scorched-earth campaign that included the use of napalm, razing rebellious villages and setting up “strategic hamlets.”

Likewise, when you hear Plan Colombia touted as a success, remember that the problem it sought to eliminate—the post–Cold War resurgence of the FARC, which had grown in military strength and moved into cocaine production—was a problem largely created because the Reagan administration refused to support an earlier peace process. In the late 1980s, thousands of former guerrillas laid down their arms to participate in electoral politics, only to be slaughtered by death squads. Within the FARC, the repression brought to power the most militaristic wing of the rebel movement.

Nowhere in all the encomia to Plan Colombia will you hear much about Cuba’s—and especially the ailing Fidel Castro’s and the late Hugo Chávez’s—key role in brokering the peace in Colombia. This was a peace made possible by old and dying men. Last week, Barack Obama, in his recent address to the UN, took the credit for Colombia’s hoped-for impending peace, and the Post’s Miroff calls it a “victory for U.S. diplomacy” and a validation of Plan Colombia. But it has been Havana that has been steadfast, not just urging its nominal ideological ally, the FARC, to stay talking when negotiations got rocky, but creating a steady, sane, and, it appears, entirely realistic set of procedural expectations that both sides could agree on (Cuba’s role in helping to broker the agreement is one of the wedge issues the paramilitary right in Colombia, led by former president Álvaro Uribe, is hoping to turn Colombian opinion against the peace in the upcoming referendum).

What gets lost in the United States when Plan Colombia is hailed as the predicate of peace is the fact that Colombia’s president, Juan Manuel Santos, negotiated, and made concessions, to the Colombian state’s sworn enemy (here’s a useful report, explaining the extremely complicated truce). In other words, if Washington is really going to replicate Plan Colombia in Afghanistan or Honduras, it would mean bargaining with, and treating as a legitimate force with legitimate grievances, Islamist and gang adversaries, as Santos did with the FARC.

The real takeaway from Colombia is that wars can end. That lesson, though, would violate a key premise of our foreign-policy establishment: Our wars are endless.