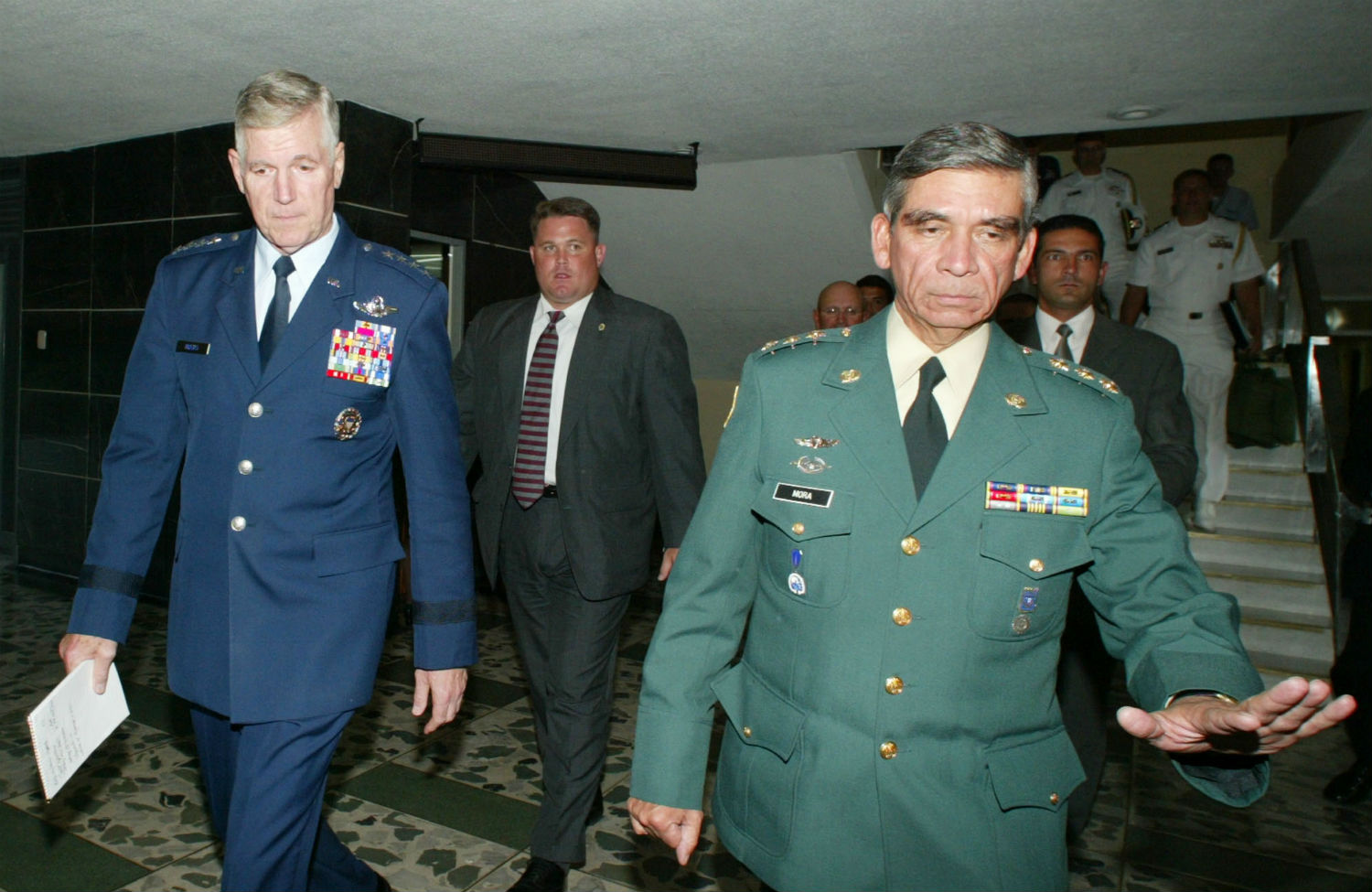 Update: The Nation received a letter questioning the Comisión Historica’s charge that 53 underage girls were sexually violated by members of a U.S. private security company, who, it was alleged, filmed the violations and sold the tapes as pornography. The main question turns on the number of reported victims, 53, which the historian Renán Vega, the author of the section of the Comisión Historica that documents the crime, says came from “local sources” from Melgar, a provincial town in Colombia’s Tolima region where the filming took place. Anna Barrera, a German researcher who studies the fraught relationship private security contractors have with rural communities, also cites 53 victims, a number that she too culled from local news sources.

The exact number of victims can’t be established, and it is difficult to say with certainty that the acts depicted were illegal: are all or some of the women underage? Was participation consensual? Financially compensated? Also in question is whether the men were in fact U.S. private military contractors or porn actors playing U.S. private military contracts. There is no doubt, according to news reports and subsequent research by scholars, that sex tapes – 12 discs and 53 videos — were made in and around Melgar, and that, according to Barrera, the girls and or women in them were “promised to gain a large amount of money as measured by the average local incomes.” They were never paid, and “some of them informed the police,” and that’s how the tapes became public.

Many townspeople believe the men to be private US military contractors working out of the nearby Tolemaida Air Base (the same base that housed U.S. Sargent Michael J. Coen and U.S. security contractor César Ruiz, who, in a separate case mentioned in my original post, are accused of raping, in 2007, a 12 year old girl). Whatever the exact story of the 53 women and or girls depicted in these videos, one thing is uncontested. Well-paid muscled-up men, U.S. mercenaries with easy access to weapons and working for large, powerful companies funded by multi-million-dollar Pentagon contracts, enjoy enormous asymmetrical, unregulated power in the poor, rural areas they operate in. Throughout Colombia, military bases like Tolemaida function as perverse sanctuary cities, allowing these new knights of late global counterinsurgency capitalism, be they U.S. soldiers or U.S. contractors, to raid at will and then withdraw back to their fortress of sovereign immunity. As a local parish priest in Melgar put it, believing the men in the videos were U.S. private contractors, the point of such films is to destroy the dignity of the townspeople, to show who are “the real rulers of the town.”

Only a small fraction of the crimes that no doubt took place under the shield of Plan Colombia have come to light.  Five United States soldiers were caught in 2005 trying to smuggle in 35 pounds of cocaine from Colombia. They had earlier been arrested in Colombia but were released under the U.S.-Colombian immunity agreement. That same year, two other U.S. soldiers were arrested in Colombia for selling 32,000 rounds of ammunition to the United Self-Defense Force, a consortium of rightwing death squads. They too, who were in Colombia training Colombian soldiers, were released and sent back to the United States. More recently seven Colombia soldiers confessed to kidnapping and repeatedly raping a thirteen-year old child from the indigenous Emberá community. The perpetrators of this crime were all Colombian and all members of the Colombian military. But considering the many billions of dollars Washington has given to the budget of the military, they are, in a way, U.S. soldiers too.

The original text of this post has been slightly revised based on subsequent information.

When Colombian men rape Colombian women, it is news. When US soldiers and private defense contractors are the rapists, not so much. It appears that not one major media organization in the United States has covered the charge, reported in Colombia, that Pentagon contractors and US military soldiers were, between 2003 and 2007, involved in a provincial pornography scandal that might have included sex with minors and filmed scenes of brutal rapes. The accused were never punished–either in Colombia or stateside–due to American military personnel being immune from prosecution under diplomatic immunity agreements between the two countries.” Nor, as far as I can tell, have any of the State Department’s allied human rights groups made mention of the allegations.

The media silence goes hand in hand with the official immunity granted not just to US diplomats, but soldiers and employees of shadowy private security firms hired by Washington to carry out much of Plan Colombia. One of the rapes occurred in 2007 and was reported in the Colombian press. It was allegedly committed by Army sergeant Michael J. Coen and an employee of a private security contractor, César Ruiz. The victim was a 12-year-old girl. “They abducted her, they drugged her, they took her to the air base near the town of Melgar and raped her, they took videos of her,” the victim’s mother told reporters. Then they drove her into town and pushed her out of their car in front of a church. The crime was well covered in Colombia, but a search of Proquest news turned up only one item in English the United States, a translation of a piece that was part of reporting in Spanish published by the Nuevo Herald (affiliated with the Miami Herald) by Gonzalo Guillén and Gerardo Reyes:

The U.S. government has made little effort to investigate a U.S. army sergeant and a Mexican civil contractor implicated in Colombia in the rape of a 12-year-old girl in August 2007, according to an El Nuevo Herald investigation.

The suspects, Sgt. Michael Coen and contractor Cesar Ruiz, were taken out of Colombia under diplomatic immunity, and do not face criminal charges in the United States in the rape in a room at Colombia’s German Olano Air Force Base in Melgar, 62 miles west of Bogota.

Colombian prosecutors issued arrest warrants. But they were “not executed because of the immunity of Coen and Ruiz.” Under a series of treaties dating back to 1962, members of the US military stationed in Colombia are immune from prosecution. That immunity has since been extended to private security firms, which have been implicated in a series of crimes in Colombia related to drug- running, money laundering and rape.

Guillén and Reyes write that the US military made no effort to interview key witnesses, including the victim. A representative of the US Army did show up at the victim’s hometown of Melgar to question the victim’s mother, Olga Lucia Castillo, about the “life and customs” of her daughter: “In an interview with El Nuevo Herald, Castillo said a man who introduced himself as Jhon Ramirez, US Army criminal investigator, interrogated her at a police station in downtown Bogota. The interview was blunt, Castillo said, with Ramirez armed with a gun during the interrogation.”

“He seemed more interested in having me sign a release exonerating (Coen and Ruiz),” Castillo said, “than learning what happened with my daughter.”

Here, in Spanish, Guillén and Reyes provide a detailed description of the assault, based on an interview they did with the mother. After the crime, the victim tried to commit suicide, and the family had to flee Melgar, joining the millions of others of Colombia’s internally displaced peoples (Colombia is second only to Syria in numbers of internal refugees).

This case is back in the news in Colombia because it was included in a report issued by the Comisión Histórica del Conflicto y sus Víctimas—a commission established to write an overview history of Colombia’s armed conflict. The commission (whose 804-page report can be found here) is a sort of watered-down version of a truth commission, established in a 2014 accord signed by the Colombian government and FARC guerrillas as part of peace talks aimed at ending the country’s half-century-long civil war. It was quickly put together, meant mostly to allow all sides in the conflict to present their interpretation of the conflict’s origins.

The chapter titled “sexual imperialism” (part of a larger section on the role of the United States in supporting state terrorism, written by Renán Vega, a Colombian historian based at the Universidad Pedagógica Nacional de Bogotá) recounts another serious sexual assault that, like the rape described above, was covered by the Colombian press, both in print and on TV, but ignored in the United States: in 2004, “53 underage girls were sexually abused by mercenaries, who filmed and sold the tapes as pornographic material.” According to one news story, the scenes on the tapes were “hard, crude, and violent.” The case was taken up by the Colombian human-rights organization, “Corporación Colectivo de Abogados ‘José Alvear Restrepo.’” But immunity held. The victims of this crime likewise were forced to flee their homes. At least one committed suicide.

The Comisión Histórica doesn’t name the private security firm involved. The Colombian press, however, identifies DynCorp, a Virginia-based contractor. Dyncorp is only slightly less infamous than Blackwater, having been involved in numerous international outrages, including, as David Isenberg, author of Shadow Force: Private Security Forces in Iraq, writes, “a sex slavery scandal in Bosnia in 1999, with its employees accused of rape and the buying and selling of girls as young as 12.”