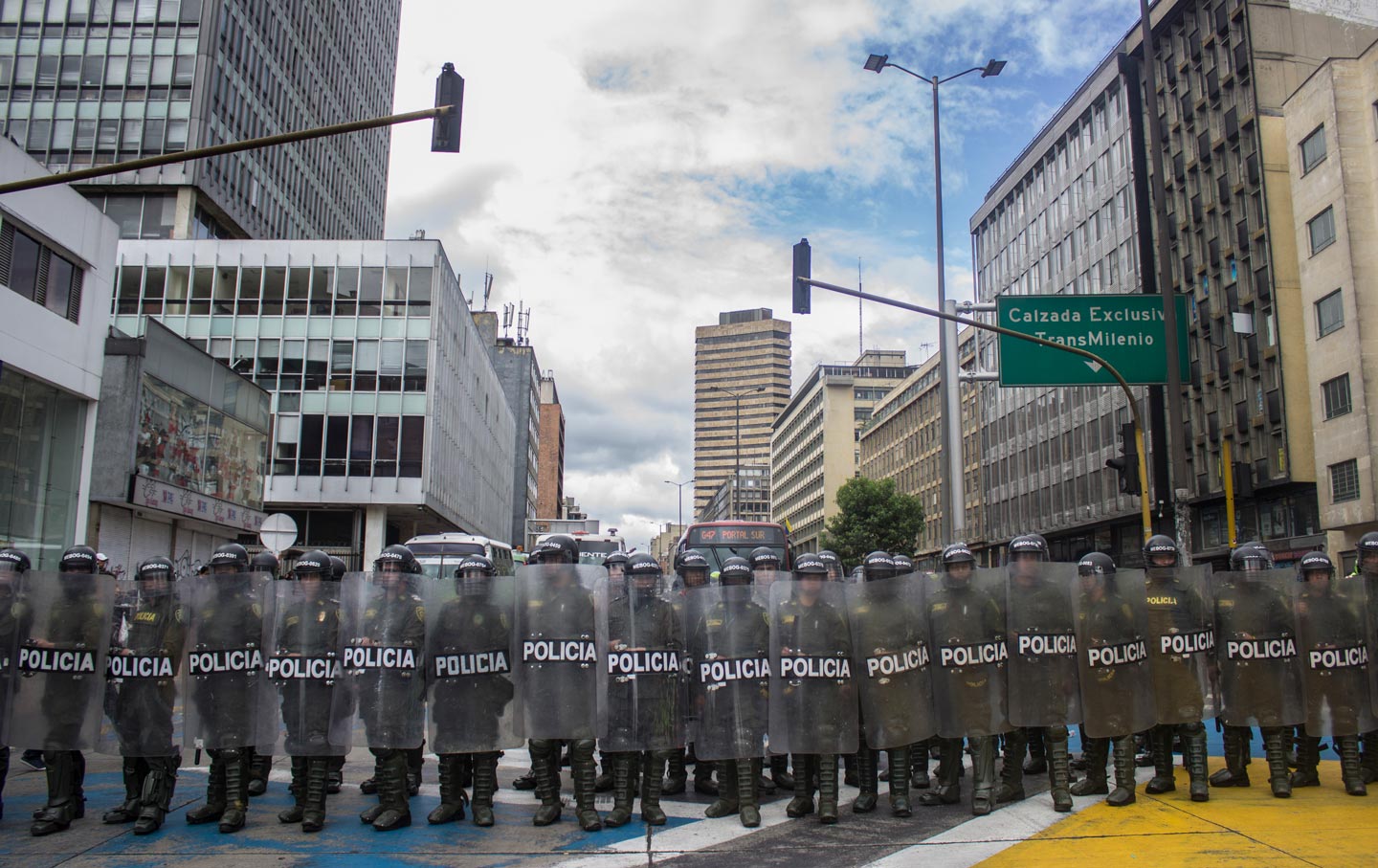 Though Hillary Clinton and Donald Trump have both said they oppose the Trans-Pacific partnership—at least in its current form—they’ve hedged on trade issues overall, while the Obama administration continues to slide the treaty through Congress. Meanwhile, the Democratic Party remains ideologically tied to neoliberal policies for opening more “free markets,” despite potential impacts on labor and economic standards around the Pacific Rim.

But if past is prologue, it’s time to revisit another trade pact that candidate Barack Obama rebuffed in 2008—back then he cited human-rights abuses against labor activists. The US-Colombia Trade Promotion Agreement ultimately did get enacted, however, and eight years on, despite lowering trade barriers and fueling an export market worth about $17 billion, it has left a labor movement in tatters, replicating a pattern of neoliberal trade ravaging the hemisphere.

American workers are increasingly wary of NAFTA-like free-trade policies that are historically associated with the hemorrhaging of many blue-collar jobs. But the losses for our “trade partners” in the Global South are often paid in blood. According to a complaint recently filed by AFL-CIO with the Department of Labor, Colombia’s political climate is just as, if not more, hostile toward trade unionists as it was before the trade treaty was enacted.

While trade has liberalized, intense violence has besieged Colombia’s incipient union movement, facing brutality from paramilitary, criminal, and state forces. Unionization efforts have stalled as dozens of union activists have been murdered, often without legal recourse.

Amid anemic enforcement of human-rights protections, the AFL-CIO reports, “Since the [free trade agreement] was signed, workers attempting to exercise their rights have suffered at least 1,466 threats and acts of violence, including 955 death threats and 99 assassinations.”

Unstable, poverty-wage labor remains prevalent in many sectors, especially oil extraction and agriculture. Although the trade deal included a Labor Action Plan designed to help revamp oversight and safeguards for workers’ rights, Colombia has lagged in implementing the extensive reform plan, despite pressure from US and Colombian unions. According to the complaint, basic freedom of association faces daily threats, and workers “face violence, reprisals and impunity when trying to exercise their rights.”

About 0.5 percent of Colombian workers have a collective-bargaining agreement, in large part because of anti-union discrimination and abusive employment practices, like keeping workers irregularly employed to prevent formalization of contracts, or breaking up unions preemptively by forming “collective pacts” with some segments of the workforce to stop workers from unionizing and pushing for a formal collective-bargaining agreement.

When workers file complaints about these and other violations of their rights, they face endless delays from the government in getting responses….Workers in the cases in the complaint have been seeking justice for four years—practically from the day the trade agreement went into effect.

Labor activists have urged the Labor Department to use the trade deal’s labor provisions to address anti-union violence in Colombia, along with abysmal working conditions and lack of social protections. But last April the US Trade Representative incensed labor activists by contending that murders of trade unionists was not considered a direct violation of the trade agreement—suggesting the broader goal of maintaining free trade is unrelated to seeking justice for anti-union violence. By contrast, corporations can press legal claims by suing governments directly through quasi-judicial tribunals, often winning huge concessions.

Often state intervention brings more harm than bosses do. “It’s not like all of these attacks are by unknown illegal private actors or paramilitaries—they were guilty of most of them back in the day,” Finnegan adds. In many sectors fraught with economic unrest, “it’s actually the Colombian government reacting to mobilized workers in the labor dispute by sending in riot police and beating people mercilessly.”

The International Trade Union Confederation has documented many incidents of aggression against union activism. When 125 women workers with the food industry union USTRIAL staged a peaceful sit-in protest at a tuna processing plant following a sudden closure and mass layoff, “Three days later, the Mobile Anti-Riot Squad, called in by the management, forcibly ousted the workers, using tear gas.”

Last March, security officers brutalized workers protesting at a sugar plantation, leaving “Five workers…seriously injured, including one individual who lost brain function and motorskills after an officer fired a teargas canister directly at his head.”

With a new government consolidating power in communities historically alienated from the state, Finnegan argues, “For a lot of people, the first presence they see of the Colombian state is the riot police…. People are in a labor conflict, and instead of having a negotiation with the Ministry of Labor, they send in the riot police, and they had machetes and clubs and beat people, and they’ve killed people.” As Colombia recovers from decades of warfare, he adds, “in the middle of a peace process, this is completely unacceptable.”

Democratically addressing labor disputes is perhaps the most important thing to do in the world of work as a contribution to the national effort of consolidation of peace. For surely there is a close relationship between peacebuilding and decent work for all.

Despite the stonewalling of labor advocates’ complaints, there have been incremental reforms under trade deals. For example, bilateral pressure from labor has pushed Honduran ministers to develop a Labor Monitoring and Action Plan in tandem with local labor advocates to strengthen regulation on unionization rights.

But the problem isn’t a lack of plans, but of concrete action. The entire negotiation process, Finnegan adds, is “still incredibly slow and clumsy and…you’re still negotiating with a country things that they were supposed to be doing before.”

And while those plans wither on paper, trade ministers are inking yet another trade deal, this time covering some 40 percent of the global economy. As Americans ponder over electing another leader, workers across Latin America and beyond know exactly where the next administration will lead them—further down a race to the bottom.