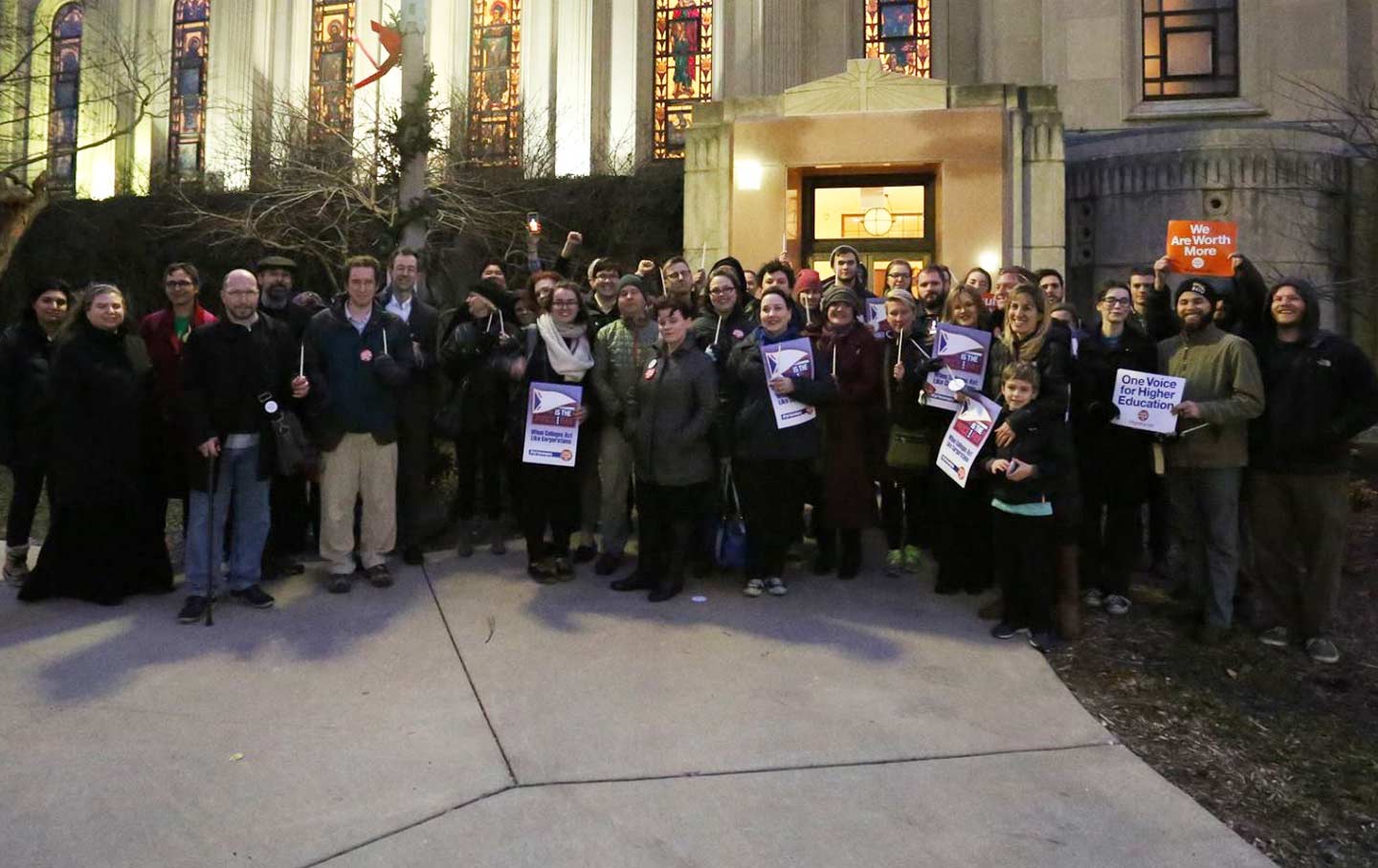 As a wave of labor organizing rolls across college campuses around the country, Loyola University Chicago now faces the challenge of putting its Jesuit principles into practice as frustrated professors push for a union.

The administration argues a union would interfere with the university’s “mission.” But according to Loyola’s struggling non-tenured faculty members, their poverty wages and exhausting working conditions prove that it is the administration’s corporate greed that is flouting the Jesuit tradition of social justice.

Like many adjuncts, English and gender studies professor Alyson Paige Warren has slipped into a kind of professorial purgatory, bouncing between teaching gigs at two local campuses and a non-profit. She constantly asks herself, “where do I need to cut from my own time? [Or] time that I should and could be using to research or publish or contribute to the community, or give more to some of my nontraditional students, instead [I spend] just flying from university to university.” Due to what Warren calls “second-class citizenship” imposed on Loyola adjuncts, she is excluded from benefits afforded to full professors, such as regular office hours or just a day-to-day presence on campus. So she ends up messaging students on the run and “grading papers on the train,” leaving even less time for actual teaching duties, like developing courses and programming.

These constant economic and professional pressures loom over some 6,500 non-tenured faculty at Chicago-area private colleges and universities, according to Service Employee International Union’s Faculty Forward campaign. The job of the adjunct is practically by definition unstable. Their schedules—and thus their income—can shift dramatically semester to semester, not only destabilizing instructors economically but also undermining the academic experience of undergraduates, who are often taught foundational courses by contingent faculty. Across Illinois, about one in five part-time faculty at private institutions depend on public benefits.

As neoliberal business models seep into the higher-education system, contingent non–tenure track faculty—those without permanent, long-term professorships—now fill more than three-quarters of instructional positions. Unionization efforts in Chicago—which just scored a major triumph with a vote to unionize the University of Chicago’s contingent faculty—grow out of rising concerns that academic labor is being deskilled and degraded by the institutions to which they’ve devoted their careers.

Jesuit institutions are grappling with a particular ethical dilemma around faculty unions: Their educational philosophy is driven by social empathy, yet the corporatization of the higher-education system seems to be steadily eroding the ethos of solidarity by impoverishing its most essential workers. Faculty Forward’s surveys of faculty at 24 Jesuit colleges and universities across the country reveal that instructors are finding it near impossible to both serve students’ needs and pursue a decent livelihood.

Some instructors in the survey lamented having to work as nannies or tutors to supplement the income of piecemeal teaching jobs. Often earning just a few thousand dollars per course per semester, many marginal faculty are anxious about student debt or mortgages, and in some cases excluded from or priced out of health insurance. Loyola has more than tripled the proportion of its contingent faculty from 2004 to 2014, intensifying competition for precious tenure-track positions. For their students, tuition has soared during the same period; it is prohibitively costly for undergraduates to be taught by instructors who are themselves mired in penury.

Warren’s career frustration has grown, she says, after being repeatedly turned down for tenure-track positions at Loyola, where she had hoped to build her career. And despite a solid publishing record, she has not found a higher-level position elsewhere on the tight academic job market. Her professional stagnation, she says, reflects the university’s failure to understand “who the modern adjunct is. This is no longer a peripheral second job…but instead a [career] focus.… The track from adjunct to tenure has completely broken down.”

At small private colleges like Loyola, known for fostering intimate student-teacher discourse, faculty advocates say the marketization of the university is corroding the quality of their pedagogy, and hampering their long-term career prospects through chronic economic instability.

In terms of professional priorities, the majority of Faculty Forward survey respondents stated that they still “had sufficient time to advise students,” but only 36 percent said they still had adequate time left for “professional development and growth.” Just over a quarter stated they had sufficient time for conducting research—suggesting that, whether informed by Jesuit values or not, advancing their own career tended to take a back seat to pushing their students forward.

Beyond the economic strains of teaching, respondents complained about social isolation from their colleagues and institutions. One respondent reflected that they “can’t establish a meaningful relationship with students, colleagues and the institution in general. I feel devalued, exploited and destabilized.”

But paradoxically, when SEIU sought to organize a contingent faculty union, the university issued a public statement placing a corporate spin on the Jesuit mission:

The administration’s primary mission, it seems, is not so much public service through education but rather serving its business interests through a hierarchal “direct working relationship.”

Ahead of the Christmas holiday, as the first Jesuit pope decried materialist greed from on high, Loyola announced that the National Labor Relations Board would soon rule on the validity of the proposed vote and collective-bargaining unit. Pro-union faculty worry the administration will try to manipulate the criteria for the bargaining unit in order to impede the organizing drive. Ultimately, federal law will settle the issue of unionization, but the politics of the union fight on campus have shed light on the dynamics of higher education as an industry.

The controversy around unionizing contingent faculty is less about third-party “interference” than about an internal clash over defining a university’s values. A union vote will present an object lesson in reconciling communal ethics with institutional priorities, and when professors cast their ballots, they’ll show their faith in a moral educational tradition that stands above market forces.