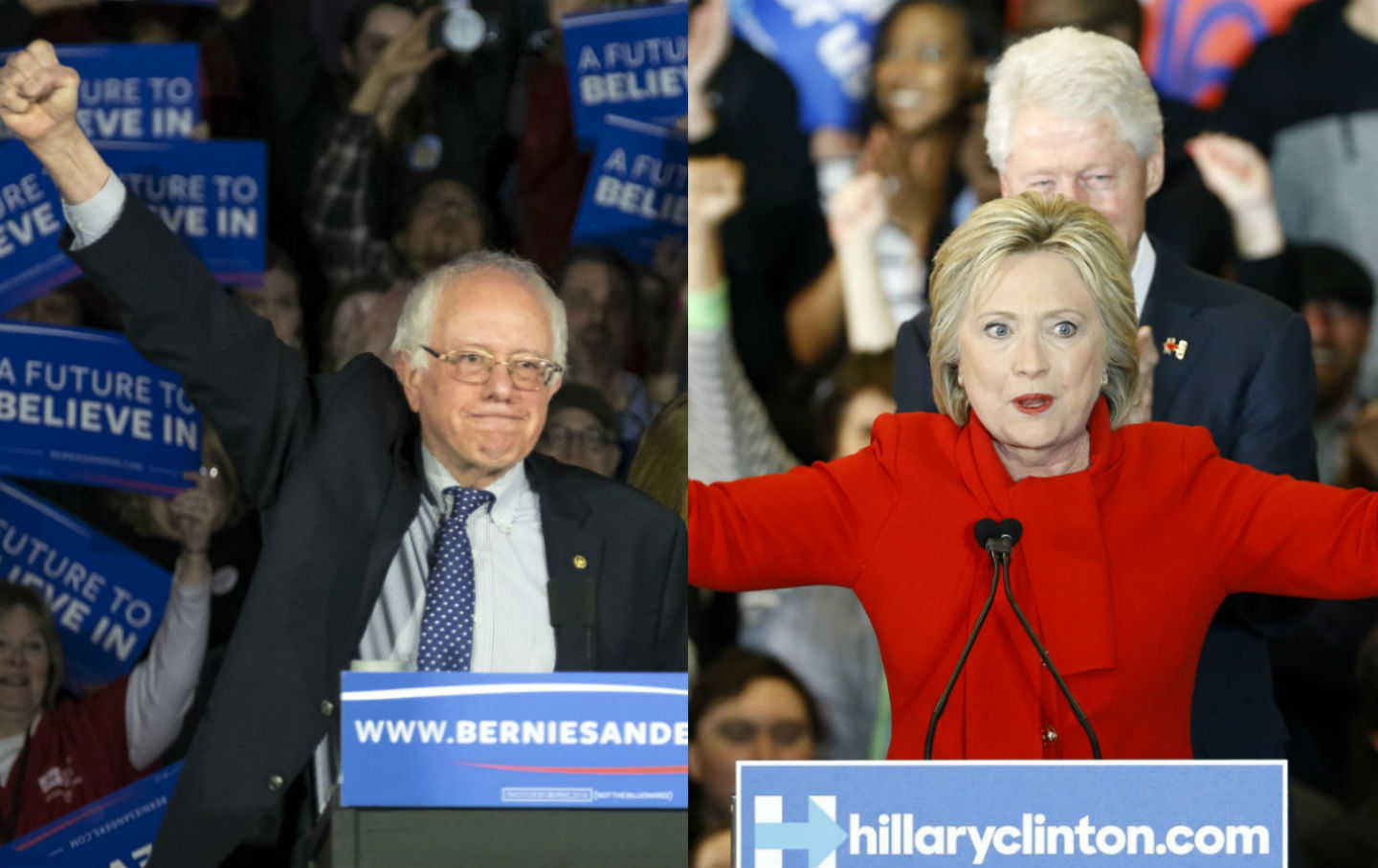 Des Moines—From the beginning of their campaign for the 2016 Democratic presidential nomination, Bernie Sanders and his “Feel the Bern” backers have upset expectations by democratizing democracy. They have renewed the traditional of mass rallies, filling halls usually reserved for rock stars and sports teams. They have upset the tired punditry that says young people can’t get excited about politics anymore. They have upset the cynicism that claims the presidential campaigns of our times will be funded mainly by millionaires and billionaires. They have upset the historic “certainty” that a democratic socialist could not be a viable contender for the nomination of a major American political party.

On Monday, they upset the Iowa caucuses.

They caused traffic jams. They formed lines that went out the doors of precincts. They slowed things down by showing up as independents ready to re-register as Democrats, as immigrants embracing their citizenship, as high-school students casting their first votes. Forms had to be filled out. Directions were needed. It took time to get things sorted. The precincts where Sanders ran best were slow to report. At the start of the night, the “inevitable” contender for the nomination, former secretary of state Hillary Clinton, held a comfortable lead. But as the night wore on—and as Sanders supporters raised the “I-believe-that-we-will-win” chants of the burgeoning mass movements from which they stepped into American politics—the margin began to narrow. From across Iowa came the results from all those precincts where the Sanders supporters had slowed the process down with all that democratization of democracy. It was 52-48 for Clinton. It was 51-49 for Clinton. It was 50-49 for Clinton. It was 50-50.

A virtual tie was enough for Sanders, who began the Iowa race as an absolute underdog, to celebrate.

At least one precinct, with 2.28 state delegate equivalents, remained uncounted at that point, and the Clinton camp claimed a win on a night that The Washington Post reported drew 171,000 Iowans to the caucuses. The Sanders camp said there were still plenty of numbers to be reviewed, and Tuesday morning newspaper headlines reported “Dems in Dead Heat.”

For Sanders—who began the Iowa race as an absolute underdog, and who remains an underdog in the race for the nomination—a “virtual tie” was cause for celebration.

“I think the people of Iowa have sent a very profound message to the political establishment, to the economic establishment and, by the way, to the media establishment,” said the Vermont senator, who told 1,700 supporters that “what Iowa has begun tonight is a political revolution.”

It must be, he explained, “A political revolution that says when millions of people come together, including those who’ve given up on the political process, they’re so dismayed and so frustrated with what goes on in Washington, with young people who before had never been involved in the political process, when young people and working people and seniors begin to stand up and say loudly and clearly, enough is enough, that our government, the government of our great country belongs to all of us and not just a handful of billionaires, when that happens we will transform this country.”

Clinton, who ran her race in Iowa with most of the major endorsements and a reasonably consistent advantage in the polls, acknowledged the result and said that Iowa had set up “a real contest of ideas.” With the New Hampshire primary just a week off, she began competing immediately. Clinton declared herself to be “a progressive…who gets things done.” Claiming turf that Sanders has occupied, she said she was “honored to stand in the long line of American reformers who make up our minds that the status quo is not good enough. That standing still is not an option. And that brings people together to find ways forward that will improve the lives of Americans.”

As cable television panels wrestled with the results, CNN’s Anderson Cooper asked, “Does Hillary Clinton start to retool her message?”

Clinton leaves Iowa as an evolving candidate who is sounding progressive populist themes.

In fact, Clinton had begun that retooling before the caucuses. That shift toward a more progressive-populist message helped her to energize supporters in the final days of the fight in Iowa.

She was declaring on the eve of the first-in-the-nation voting that it was time to dramatically increase wages, to renew American manufacturing, to invest in the physical infrastructure of the land, and to build out the social infrastructure with bold commitments to make education affordable and healthcare accessible.

Yes, she explained, this program would require resources. But the money to pay for new investments, for new commitments to build a more just and civil society, can be found, Clinton told a rally in Council Bluffs. “We’re going to get it from the wealthy, from the people who’ve done very well in this economy, even during the great recession,” she said.

Campaigning on a tax-the-rich pledge to implement new taxes on those with yearly incomes of more than $1 million and an even greater “fair share” tax on those making more than $5 million annually, the candidate ripped into millionaires and billionaires for “evading taxes” and decried their greed.

“This is corrosive to our democracy,” Clinton declared, and the crowd roared its approval.

The message was powerful. And it kept Clinton competitive in a year of political upheaval.

That was critical for Clinton, who saw a 50-point lead in Iowa dwindle to single digits as Sanders mounted a progressive populist challenge that proposed that “political revolution” as the pivot point toward a new “New Deal” moment in which the great economic and social challenges facing American might be met.

No matter what the final count, the real victory for Sanders came before the caucuses convened. He had already so transformed the contest that Clinton was forced to run a different race than she had intended. That shift by Clinton was critical for her candidacy. But it also provided a measure of the influence of what a key Sanders backer, National Nurses United union Executive Director RoseAnn DeMoro, referred to as “the most inspiring campaign I have seen in my life.”

Sanders, the first democratic socialist to compete seriously for the presidency in modern times, was not supposed to pose any kind of threat to the electoral juggernaut of the former secretary of state. “When Sanders first announced, he was universally dismissed as irrelevant,” recalled the Campaign for American Future’s Robert Borosage, who noted that Clinton led Sanders in a February 2015 NBC poll of Iowa voters by 68 percent to 7 percent.

Against all odds, Sanders has mounted a meaningful challenge to Clinton and Democratic Party orthodoxies. As the anticipation of 2015 gave way to the reality of 2016, Sanders established a clear lead in the first-primary state of New Hampshire and began to pull even in Iowa—to such an extent that, on the eve of caucus day, he could credibly declare: “The inevitable candidate is today not quite so inevitable.”

Clinton, whose 2008 presidential candidacy began its long decline with a defeat at the hands of Barack Obama in Iowa, was not prepared to let the first-caucus state slip away again. So she embraced an economic-populist message that, as the caucuses approached, began to echo Sanders’s themes—and at least some of his passion.

Clinton began moving left last summer, getting closer to Sanders and O’Malley on issues ranging from campaign-finance reform to wages to trade policy. By the time the race got to Iowa, and the polls narrowed, Clinton was airing television commercials that spoke of her determination to fight for working families—and reminding voters that she has, for decades, been a proponent of early-childhood education and a host of other programs that make real the promise of activist governance. Her speeches became more spirited, her crowds more energetic and, on the morning of caucus day, the Des Moines Register headline read: “Hillary Clinton closes with populist fire.”

Clinton’s critics will suggest that her move toward populism is insincere. And Clinton’s commitment will continue to be tested—in New Hampshire next Tuesday and, over the coming month, in the better part of a dozen states.

Sanders has the resources to run a long race, and he has bases of strength—especially, as the Iowa polls made clear, among young voters and working class voters.

Sanders leaves Iowa as what he has always been: an economic populist who is challenging a broken status quo.

Clinton leaves Iowa as an evolving candidate. That’s good. She is evolving toward a populism that—should she win her party’s nomination—will make her a stronger fall contender.

As the Iowa campaign closed, Clinton seemed to be enjoying the chance to let rip in front of cheering crowds. “We can’t afford to make a mistake,” she told 2,600 people at a high school in Des Moines on Sunday night. “I want you to think for a minute about what the Republican candidates are talking about as they make their final appeals. They want to rip away the progress we’ve made. They want to rip back rights that have been extended. They want to go back to trickle-down economics that wrecked our economy.”

That’s a stronger message than Clinton brought to Iowa, a more progressive and populist message.