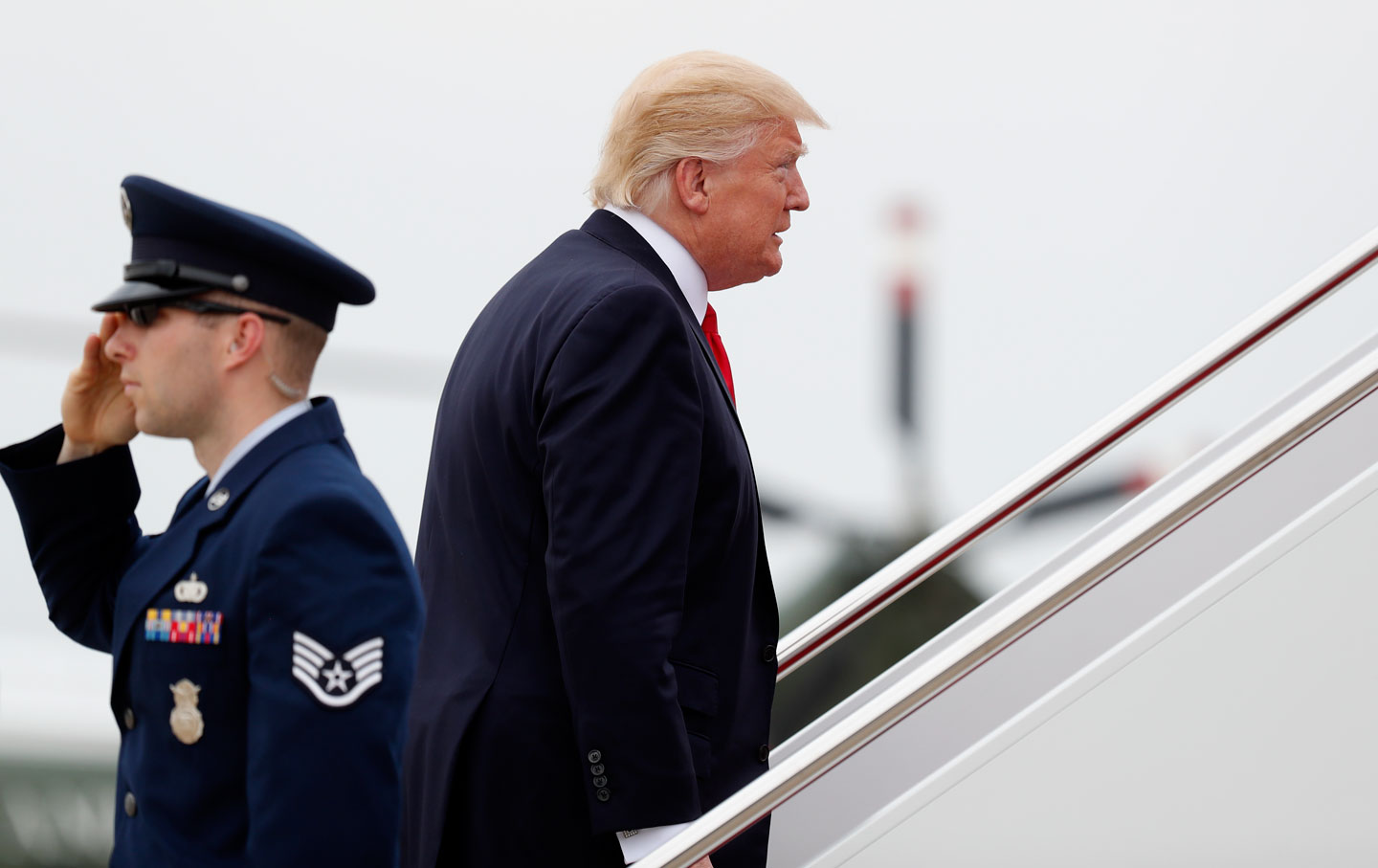 This is how much I’ve been in denial of Trump’s presidency: I didn’t just wish, I believed that he would resign soon after 100 days, which would be right about now. In April, I even tweeted this so as to get credit and bask in the glory:1

My crazy prediction: Trump will resign after 100 days. He tells himself: I don’t need this shit! He tells world: the best 100 days ever! He wins! He saves face! He’s a slave to Big Fat Symbols, and “100” opens an exit door for him.  2

As it turns out, I’m the slave to symbols: After 100 days, I went through an exit door and finally started to accept that, like it or not, Donald J. Trump really is president of the United States.  3

And I have a hunch that many other citizens, liberal and conservative, have been in a similar denial, unwilling to say the words “President Trump,” convinced that his presidency is a temporary aberration that will soon be rectified—by impeachment, the 25th Amendment, or an act of God. Whenever I looked at him, I half-believed he was a hologram.  4

A far more powerful, and more complicated, version of this tendency drove lots of Americans to deny—for eight years—that a black man occupied the White House. According to stereotype, liberals should be able to accept reality sooner than that—we like science, we make up the reality-based community, and all that. But it’s one thing to resist, protest, organize, and call him names, like a delusional man-baby. (How else do you describe an adult who is surprised that being president “is more work than in my previous life” and that he “thought it would be easier”?) It’s another to truly accept, in your bones, the sheer fact that he is president.5

I’m still working on it, but over the last week or so, I’ve gradually begun to relax my defenses against reality. It wasn’t just the symbolic marker of Trump’s first 100 days. It was an accumulation of bits of news and patterns of speech. I was beginning to internalize small shifts in how the news media regarded him.6

On Day 94, for instance, a Washington Post/ABC News poll came out indicating that if the election were held again, Trump would beat Clinton, 43 to 40 percent. This certainly sounds plausible—even most Hillary voters I know don’t want to hear from her (or Bill or Chelsea) again. A poll like that can reduce the cognitive dissonance of knowing that the popular-vote winner lost. If there’s a chance that Trump would win the popular vote now, I tell myself, then he’s a tad more legitimate—even if no such vote will ever be taken.7

And maybe I’ve just been noticing it more, but lately it seems that more TV commentators who I respect, like Chris Hayes, are tossing off the term “President Trump” without hesitating. Surely, I thought, their producers are forcing them to practice saying the phrase. But, even if so, each time I hear it said so effortlessly, a little arrow dents my armor.8

And by now, Trump apologists, like CNN’s Jeffery Lord, look less like fly-by-night cable flings (as Cory Lewandowski was), and more like they’re here to stay. Meanwhile, the Trump administration seems to be removing or marginalizing fringers like Steve Bannon, Sebastian Gorka, and Kellyanne Conway. The so-called adults, like H.R. McMaster, James Mattis, and Rex Tillerson, are pushing well-worn Establishment policies (like increasing military spending and making nice with China). Trump settling in with the Establishment means, I’m afraid, that he, too, is probably here to stay.9

The news media were overflowing with 100-Day stories about Trump supporters who still back their man. But on Day 97, one man in particular got to me. Jon Vigue, 68, a retired construction worker and Vietnam vet, “came to Mr. Trump reluctantly,” The New York Times wrote.10

To his relief, Mr. Vigue has found Mr. Trump to be “not quite as conservative as a lot of people thought.” Back in November, he said he did not want Mr. Trump to repeal the Affordable Care Act, and as it happens, Mr. Trump failed to do so when he tried.11

I tried to put myself in Vigue’s shoes, and for a few seconds, I relaxed into seeing the glass half-full. If I could do that even briefly, I could imagine how others did it full time. Until and if Trump’s base and the Maybe Trumpers turn against him—and the best chance for that is if the media makes it glaringly clear that he just got one big step closer to taking their health care away—it’s unlikely that Trump will bolt or that Congress will bust him. I hold out hope for such a day, but until that actually happens, I have to admit that a Trump presidency is here, too.13

Words in the Age of Trump

By Day 99, I could feel my denial give way still more while watching Morning Joe, where a new conventional wisdom was taking shape. That Trump is on learning curve, albeit a slow one (see all the pieces headlined “The Education of Donald Trump”; it’s the replacement concept for “pivot”), has been a standard observation of new presidents for a while. What’s new is the notion that anyone who has to deal with Trump is on a learning curve, too. Joe and Mika were off that day (getting engaged in France!), and Donny Deutsch, Mike Barnacle, and the gang were talking about Trump and  blurting out that we could get into a “major, major conflict” with North Korea. “Yes, he is president and he shouldn’t speak in those grandiose terms, but we are learning to decipher,” Deutsch said. “If it was 99 days ago and he said that, we would all be going into our bomb shelters and what not. Basically, all he was simply saying, Yes, there can be a conflict, of course there could be a conflict…. Our job as both citizens and, more importantly, as the rest the world is to just kind of translate to what that means.” This is akin to how Trump supporters have supposedly been understanding him all along, by taking him “seriously but not literally,” as the pass code goes.14

On Day 100 itself, more evidence emerged that indicated Trump and POTUS are one and the same. Even with him missing, the White House Correspondents’ Dinner functioned as the other bookend to his inauguration. Only real presidents get this ritual treatment, right? Samantha Bee’s Not the White House Correspondents’ Dinner, as clever as it was, served inadvertently to anoint him.15

Maybe some of us hardcore Trump-deniers subconsciously fear that accepting the reality of his presidency will bleed over into accepting his policies, or that it will take the fight out of us. But the opposite is usually true: accepting reality, seeing it clearly, is necessary to fight from a position of strength.16