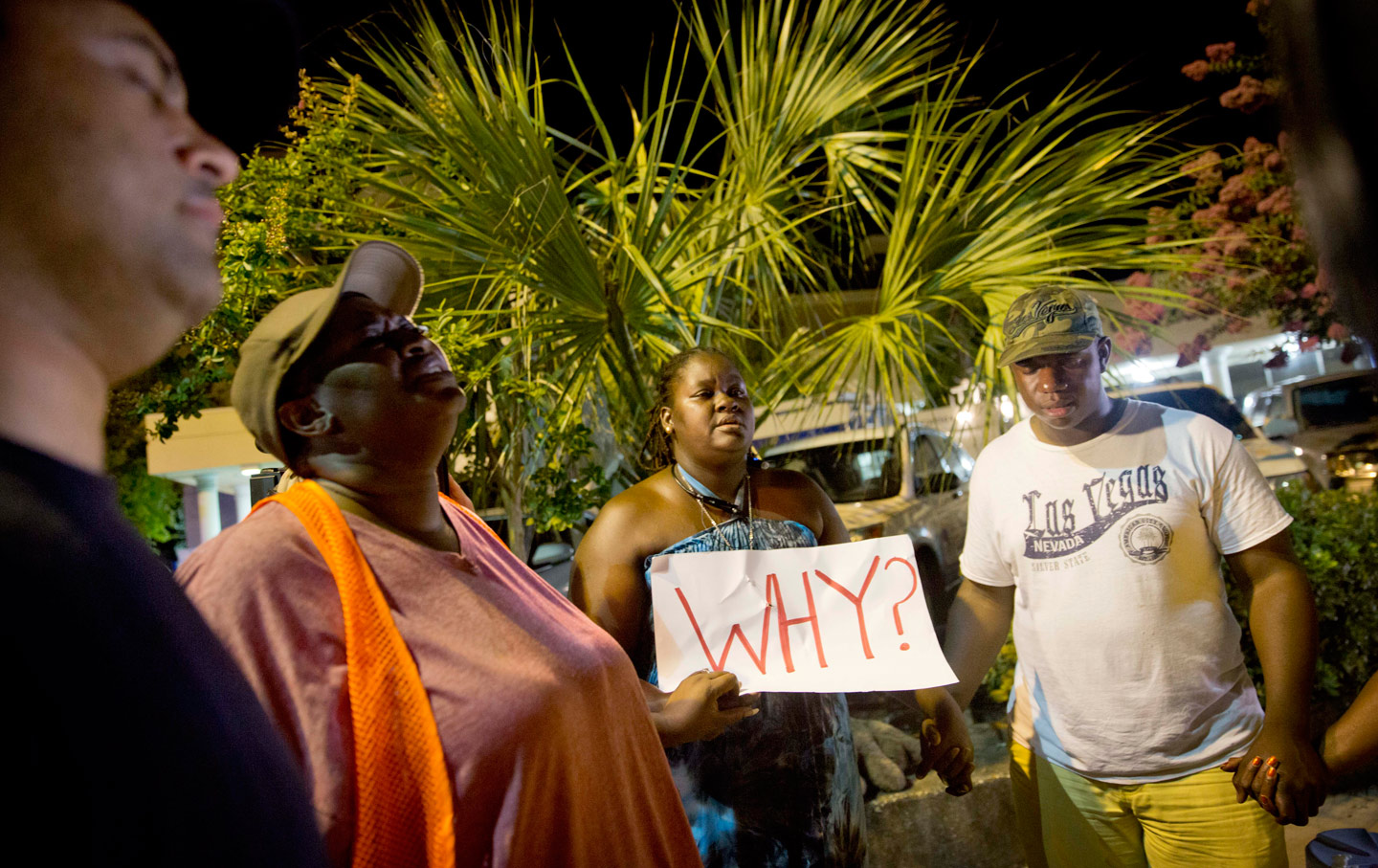 The Emanuel African Methodist Episcopal Church in Charleston, where a young white man reportedly shot and killed nine people Wednesday night, is an historic center of religious and social activism, with roots in anti-slavery and anti-segregation struggles going back two centuries and a contemporary commitment to the struggle against police brutality and economic injustice.

The oldest AME church in the South, and one of the largest African-American congregations in the region, it is referred to as “Mother Emanuel” because of the central role this faith institution has played in the lives and the history of a city, a state, a region, and a nation. That centrality is recalled in the church’s history:

In 1822 the church was investigated for its involvement with a planned slave revolt. Denmark Vesey, one of the church’s founders, organized a major slave uprising in Charleston. Vesey was raised in slavery in the Virgin Islands among newly imported Africans. He was the personal servant of slavetrader Captain Joseph Vesey, who settled in Charleston in 1783. Beginning in December 1821, Vesey began to organize a slave rebellion, but authorities were informed of the plot before it could take place. The plot created mass hysteria throughout the Carolinas and the South. Brown, suspected but never convicted of knowledge of the plot, went north to Philadelphia where he eventually became the second bishop of the AME denomination.

During the Vesey controversy, the AME church was burned. Worship services continued after the church was rebuilt until 1834 when all black churches were outlawed. The congregation continued the tradition of the African church by worshipping underground until 1865 when it was formally reorganized, and the name Emanuel was adopted, meaning “God with us.”

Rebuilt and expanded over the ensuing decades, it became an essential stop on the circuit of civil-rights champions, including the Rev. Martin Luther King Jr., in the 1950s and 1960s; and it has remained a touchstone for contemporary struggles for economic and social justice. The church’s pastors have long been leaders of those struggles.

The Rev. Clementa Pinckney, who was among those killed during the prayer meeting Wednesday night, carried on that tradition. When he was elected to the South Carolina General Assembly almost two decades ago, at the age of 23, he was the youngest African-American to serve as a South Carolina state legislator. Since 2000, he has served in the South Carolina Senate.

Rev. Pinckney, with his great sense of history and mission, carried on a family tradition of religious leadership and political engagement.

A 2010 profile in the Charleston Post and Courier noted that “In his family, on his mother’s side, are four generations of AME pastors. His great-grandfather, the Rev. Lorenzo Stevenson, sued the Democratic Party in the state to end whites-only primaries. His uncle, the Rev. Levern Stevenson, who pastored at Macedonia AME Church in Charleston, was involved with the NAACP in the 1960s and 1970s fighting to desegregate school buses in Jasper County, and sued Gov. John C. West to create single-member voting districts that would open the door to blacks who wanted to serve in the Legislature.”

As a pastor and a legislator, Rev. Pinckney maintained the commitments of his family and his church to voting-rights and civil-rights struggles that are far from finished. “Could we not argue that America is about freedom whether we live it out or not?” he said in 2013. “Freedom, equality and the pursuit of happiness. And that is what church is all about: freedom to worship and freedom from sin, freedom to be full of what God intends us to be, and to have equality in the sight of God. And sometimes you got to make noise to do that. Sometimes you may have to die like Denmark Vesey to do that. Sometimes you have to march, struggle and be unpopular to do that.”

After the April police shooting of Walter Scott, which was captured on video and stirred an international outcry, Rev. Pinckney rallied with pastors in North Charleston and participated in vigils demanding changes in policing.

He became a legislative leader on behalf of a plan to make body cameras mandatory for police officers across South Carolina, declaring, “I think that if my colleagues will be moved by the fact that other people are moved by the need for body cameras, and also that there will be persons that will give testimony as to why body cameras are important. Body cameras help to record what happens. It may not be the golden ticket, the golden egg, the end-all-fix-all, but it helps to paint a picture of what happens during a police stop.”

The Martin Luther King Jr. Center for Nonviolent Social Change, which distributed an image of Rev. King at Mother Emanuel in the 1960s sent messages Thursday morning, mourning the tragedy in Charleston and urging people to tonight “light 9 candles and say a prayer for justice, for true justice.”

“At this point,” said the King Center, “it should certainly be beyond clear why #BlackLivesMatter is an earnest cry and an affirmation.”