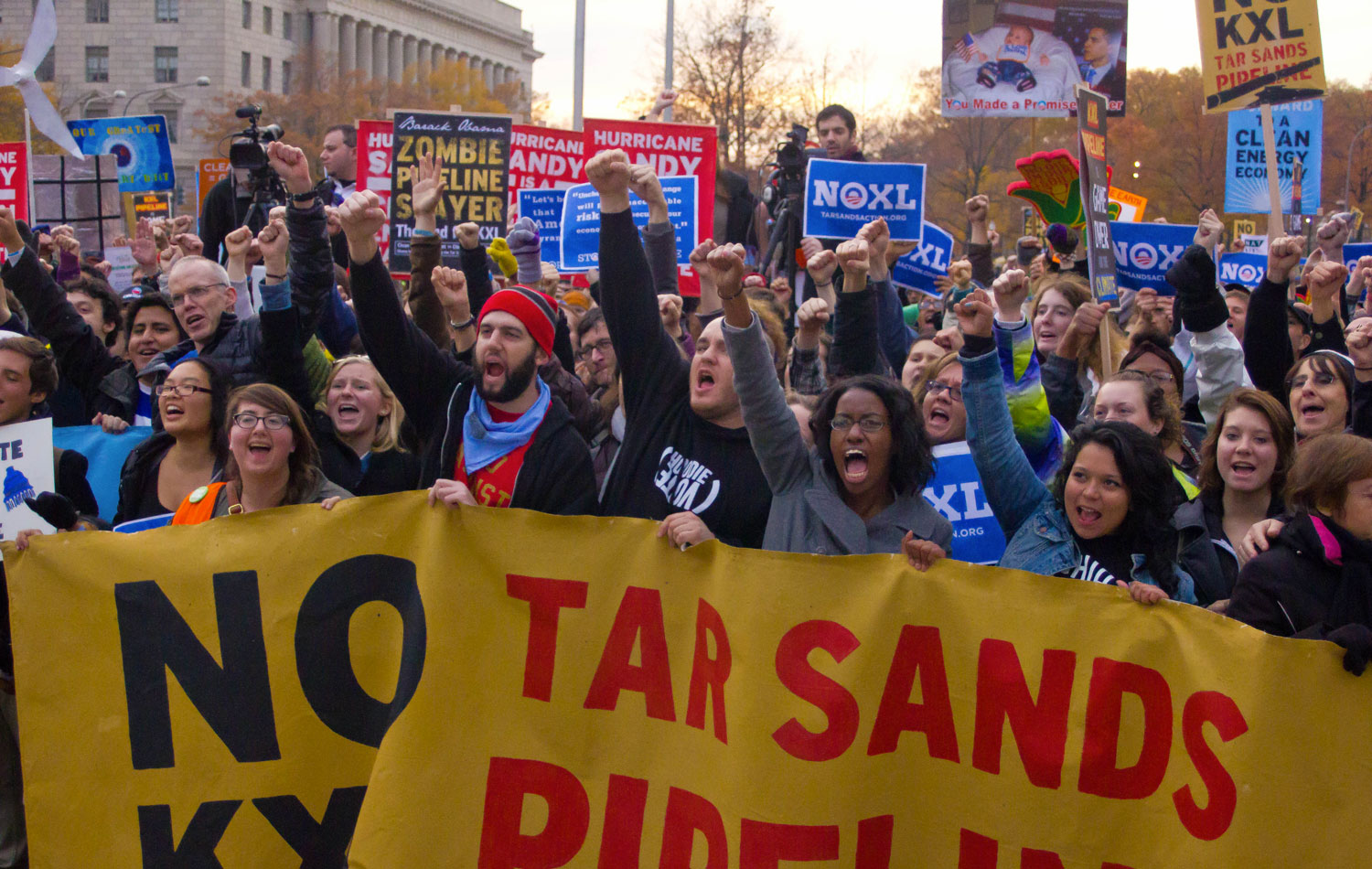 Ever since the debate over the Keystone XL pipeline exploded three and half years ago, that’s been the argument from the project’s liberal supporters. Sure, the oil that Keystone would carry from the Alberta tar sands is three to four times more greenhouse-gas-intensive than conventional crude. But that’s not on Keystone XL, we’re told. Why? Because if TransCanada isn’t able to build Keystone to the south, then another pipeline will be built to the west or east. Or that dirty oil will be transported by rail. But make no mistake, we have long been assured: all that carbon buried beneath Alberta’s boreal forest will be mined no matter what the president decides.

Up until quite recently, the tar-sands boom did seem pretty unstoppable. The industry regularly projected that production would soon double, then triple, and foreign investors raced to build massive new mines. But these days, panic is in the air in formerly swaggering Calgary. In less than a year, Shell, Statoil and the French company Total have all shelved major new tar-sands projects. And a rather large question mark is suddenly hanging over one of the world’s largest—and dirtiest—carbon deposits.

This radically changes the calculation confronting Barack Obama. His decision is no longer about one pipeline. It’s about whether the US government will throw a lifeline to a climate-destabilizing industrial project that is under a confluence of pressures that add up to a very real crisis. Here are the four main reasons that the tar sands are in deep trouble.

1. Oil prices are low. In mid-November, oil prices dipped to levels not seen since 2010. Ahead of the recent G-20 summit, Vladimir Putin spoke of preparing for further “catastrophic” drops. This matters nowhere more than in the tar sands, where the semisolid bitumen is hugely expensive to extract; the sector really started booming when it looked like $100-a-barrel was the new normal. Prices may well rebound, but the dip has been a vivid reminder of the inherent risk in betting big on such a high-cost extraction method.

2. Tar-sands pipelines are protest magnets. Supporters of Keystone frequently claim that if the oil doesn’t go south through the United States, it will simply be piped west, through British Columbia, and make it onto tankers that way. They might want to pay closer attention to what is going on west of the Rockies. Since November 20, more than sixty people have been arrested outside of Vancouver as they attempted to block the expansion of a tar-sands pipeline owned by Kinder Morgan. Further north, Enbridge’s proposed Northern Gateway pipeline, another would-be tar-sands escape route, is even more widely rejected. Indeed, opposition to increased tanker traffic along their beloved coastline has united British Columbians.

So what about east? Well, on November 21, the premiers of Ontario and Quebec signed a joint agreement that erected a series of obstacles to TransCanada’s proposed Energy East pipeline, which, if completed, would carry tar-sands oil to the East Coast. The move came in response to strong opposition to the project in both provinces.

Some members of the “it doesn’t matter” camp point out that tar-sands oil is getting out anyway through the existing infrastructure. This completely misses the point that Keystone XL has always been linked to plans to greatly expand the amount of heavy oil being extracted. And the capacity to transport that oil isn’t there, which is why, when Statoil nixed its mine (reportedly worth $2 billion), it cited “limited pipeline access” among its reasons.

3. Indigenous rights keep winning in court. Adding more uncertainty is the fact that all these projects impact land to which First Nations people have title and treaty rights—rights that have been repeatedly upheld by Canada’s Supreme Court. Most recently, in June, the high court ruled unanimously that development couldn’t happen on the lands of the Tsilhqot’in First Nation in BC without seeking their consent. The pipeline companies do not have First Nations consent—on the contrary, dozens of indigenous communities have vigorously asserted their opposition. Canadian courts are already jammed with pipeline challenges, including nearly a dozen targeting Northern Gateway alone.

4. Climate action is back. Yes, the targets in the US-China deal are wholly inadequate, and so are the sums pledged to developing countries for climate financing. But there can be no doubt that climate change has landed back on the world stage in a way not seen since the failed Copenhagen summit in 2009.

That’s another strike against unchecked tar-sands expansion, because those mines are the main reason behind Canada’s status as the world’s foremost climate criminal, with emissions nearly 30 percent higher than they should be under the Kyoto Protocol. Canadian Prime Minister Stephen Harper got away with laughing off his country’s international commitments when other governments were doing the same. But now that the United States, China and the European Union are at least making a show of taking the climate crisis seriously, Canada’s defiance is looking distinctly rogue.

It is in this rapidly changing context that Barack Obama must make his final determination on Keystone. A jittery market is looking to him for a signal—not just about this one project, but about the much larger and consequential one at the mouth of that pipe. Are the tar sands a long-term business prospect, a safe haven in which to sink hundreds of billions of dollars for decades to come? Or was the whole idea of flaying a huge, beautiful swath of this continent to exploit an energy source that is guaranteed to help cook the planet merely a brief folly—a bad dream from which we all must awake? All eyes are on the president. Yes or no?