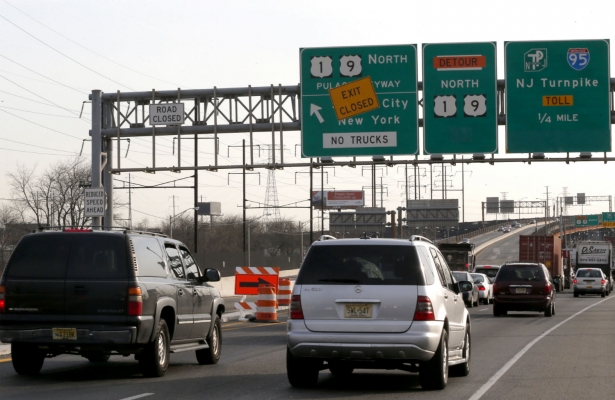 Authorities are looking into the Port Authority's funding for renovations to the Pulaski Skyway, which connects New York to Newark, NJ. (AP Photo/Julio Cortez)

Two former close aides to New Jersey Governor Chris Christie, Jeffrey Chiesa and Deborah Gramiccioni, both of whom worked with Christie when he was the US Attorney in New Jersey before becoming governor, have been subpoenaed in an investigation into what looks to have been an illegal maneuver to secure a cool $1 billion in Port Authority funds to rebuild a roadway in New Jersey. And it’s this, if it has legs, and not the lane-closing scandal, that could end up doing the real damage to Christie’s political future.

Acting as though Bridgegate and other scandals are behind him, Christie sought to recharge his efforts as head of the Republican Governors Association last week, making appearances and organizing fundraisers to help the re-election efforts of three GOP governors. All of it, of course, is aimed at renewing his 2016 presidential hopes. But the possibility that the bubbling scandals will burst to the surface and derail those hopes mounted as federal and local prosecutors expanded their investigations behind the scenes.

Christie hosted a fundraiser in New Jersey on May 28 for Iowa Governor Terry Branstad, who is running for re-election in the first caucus state, then started a two-day trip to New Mexico to stump and raise money for the re-election of Governor Susana Martinez, who, as Christie Watch noted, has been touted as a potential vice-presidential contender on a Christie ticket. He stopped off to help Tennessee Governor Bill Haslam on his way back. The week before, he was campaigning with the embattled Florida Governor Rick Scott.

But while Christie has been promoting his fellow GOP governors elsewhere, back home federal and state prosecutors, the SEC and state legislators are expanding their investigations. Tomorrow the special New Jersey legislative committee investigating Bridgegate hears testimony from a commissioner at the Port Authority of New York and New Jersey, William Pat Schuber. Back on September 19, committee co-chairwoman Loretta Weinberg sent a letter to Schuber raising concerns about the previous week’s lane closures, CCing Christie, and demanding to know why it occurred. She received no reply, and now she wants to know why.

The committee was also supposed to query Port Authority Executive Director Patrick Foye. Last fall, it was Foye who reopened the lanes on the George Washington Bridge closed by Christie’s aide and who warned that laws had been broken. Foye’s testimony was delayed at request of US Attorney Paul Fishman.

This is the second time that Fishman asked the legislature to delay Foye’s testimony. Fishman wanted it postponed in May, according the Bergen Record, because he wanted Foye to testify first to the grand jury investigating the lane closures. It appears that Fishman has more to glean from Foye than what he has already said.

It is unlikely that Foye knows much about why the lane closures happened, but he can shed light on other aspects of the scandal. Back in December he testified under oath to another legislative committee that he did not know about the lane closures until they happened, and didn’t discuss it afterwards with the Christie politico who ran the closures, David Wildstein. But he did say they were not closed as part of a traffic study, as Christie confidante and former PA deputy executive director Bill Baroni stated before the same committee. Foye also testified he saw the lane closures as illegal, violating numerous state and federal laws. Why he allowed Baroni to claim to the committee that the closures were a traffic study, and why he allowed a top PA lawyer and Christie appointee Philip Kwon to prep Baroni for several days on how to package his testimony, are questions Fishman and the committee likely want answered. Another issue is whether Foye was subjected to any intimidation after he re-opened the lanes, as some of the e-mails released by the committee indicate.

So far the committee has heard from three witnesses, and committee co-chairman John Wisniewski said the panel would call about ten more people to testify and issue a report in the fall, The Wall Street Journal reported.

A parallel investigation by Manhattan District Attorney Cyrus Vance is expanding too. And it is this one that could be the most devastating to Christie’s career, as Christie Watch has indicated.

Vance has now subpoenaed two more top Christie administration officials regarding his investigation into Christie’s money-grab of Port Authority funds when the governor abruptly cancelled the multibillion-dollar ARC tunnel project in late 2010. Christie wanted to use the $1.8 billion that had been allocated to New Jersey by the PA for the proposed New Jersey–New York tunnel to fund road and bridge projects in New Jersey without raising taxes to pay for them.

Most importantly, Christie wanted the money to rebuild the Pulaski Skyway, a link between New Jersey’s largest city, Newark, and the Holland Tunnel to New York. But there were problems. The PA can only finance roads, bridges and tunnels considered part of its transportation network, and for historical reasons the PA doesn’t have jurisdiction over roads to the Holland Tunnel. And PA lawyers warned this made it nearly impossible to steer PA funds to the Pulaski Skyway project, according to an investigative report by Shawn Boburg at the Bergen Record:

Chris Hartwyk, former deputy general counsel at the Port Authority, wrote that justifying the projects by claiming the roadways were connections to the Holland Tunnel, as the governor previously stated, would be “difficult if not impossible” because of the wording of existing laws.

PA lawyers were pressured to find some other justification to use PA money for the Skyway. So they did, linking it to the Lincoln Tunnel, miles away. But they had major concerns, as the Record also noted:

“It can be argued” that the four roads feed into the Lincoln Tunnel, McIntyre (PA assistant general counsel) wrote in a memo on March 28. “However, it is important to note, that this statutory construction is not without doubt and may raise questions in the minds of some. The looser the statutory construction means the greater the risk of a successful challenge by the bondholders and the investors,” she wrote.

According to Main Justice:

If investigators find the state road repairs were mischaracterized in bond offering documents as “Lincoln Tunnel Access Improvements” to make the projects appear as though they’re legally permitted, it would constitute a knowing, intentional material misstatement in violation of federal, state and securities laws and constitute fraud. Such fraud would also mean that the bonds issued and outstanding for fixing state roads would no longer be tax exempt opening another whole can of illegal worms according to a source familiar with such investigations.

Pressing the investigation, Vance has now subpoenaed the two top officials inside Christie’s administration who were most involved with the handling of the Pulaski Skyway characterization, Jeffrey Chiesa and Deborah Gramiccioni.

When Vance issued his subpoenas, US Attorney Paul Fishman also started looking into it, meeting with the SEC about their investigation and speaking with PA General Counsel Darrell Buchbinder.

The two officials now subpoenaed by Vance have been close associates of Christie and key players in his government. Chiesa was Christie’s first chief counsel and then was appointed attorney general. Now he works at former Port Authority Chairman David Samson’s law firm. Chiesa has been tied to Christie since the two first worked together at a law firm in 1988.

As chief counsel to Christie, Chiesa was directly involved in getting the PA lawyers to redo existing financing documents to allow the PA money to flow for the Pulaski Skyway. According to Main Justice, there was a meeting in Trenton with Baroni, Chiesa and PA assistant general counsel Carlene McIntyre. “Chiesa arranged the meeting to review the governor’s proposed changes, people familiar with the situation said.”

The other subpoena went to Gramiccioni, former head of the state’s Authorities Unit, who has worked with Christie since his US Attorney days. Last year Christie chose Gramiccioni, then his deputy chief of staff, as a replacement at the PA for Baroni, a friend of hers from law school. She was brought into the Pulaski Skyway funding issue as head of the Authorities Unit. Christie has made the Authorities Unit his eyes and ears at the various independent agencies, boards and authorities, such as the PA. The unit’s lawyers read board minutes, attend meetings and in various ways try to impose the governor’s policies on the independent entities.

A feature on Gramiccioni in The Philadelphia Inquirer when she headed the Authorities Unit made clear she was an enforcer for the governor:

“We’re asking more questions than ever before, and that is taking a number of these authorities by surprise,” said Gramiccioni, who talks in rapid-fire bursts punctuated by wide smiles. The result? “Angry defiance has become the norm in my world…” Gramiccioni is most like her boss in one way: She relishes a good rumble. “I have very thick skin, I’m prepared for a fight, and I know how to go on offense when necessary,” she said. “I go to sleep at night knowing the next day is going to be another battle. And I look forward to it.”

The PA lawyers’ concerns about the Pulaski Skyway funding, according to the Record, were passed on to Gramiccioni, who passed them on to the attorney general, at the time Paula Dow, who also later went to the PA. After a number of months and rewrites from PA lawyers, documents okaying the PA money for the Skyway were finally ready for sign-off from the attorney general. And who was that attorney general, newly appointed? The selfsame Jeffrey Chiesa, and he clinched the deal.