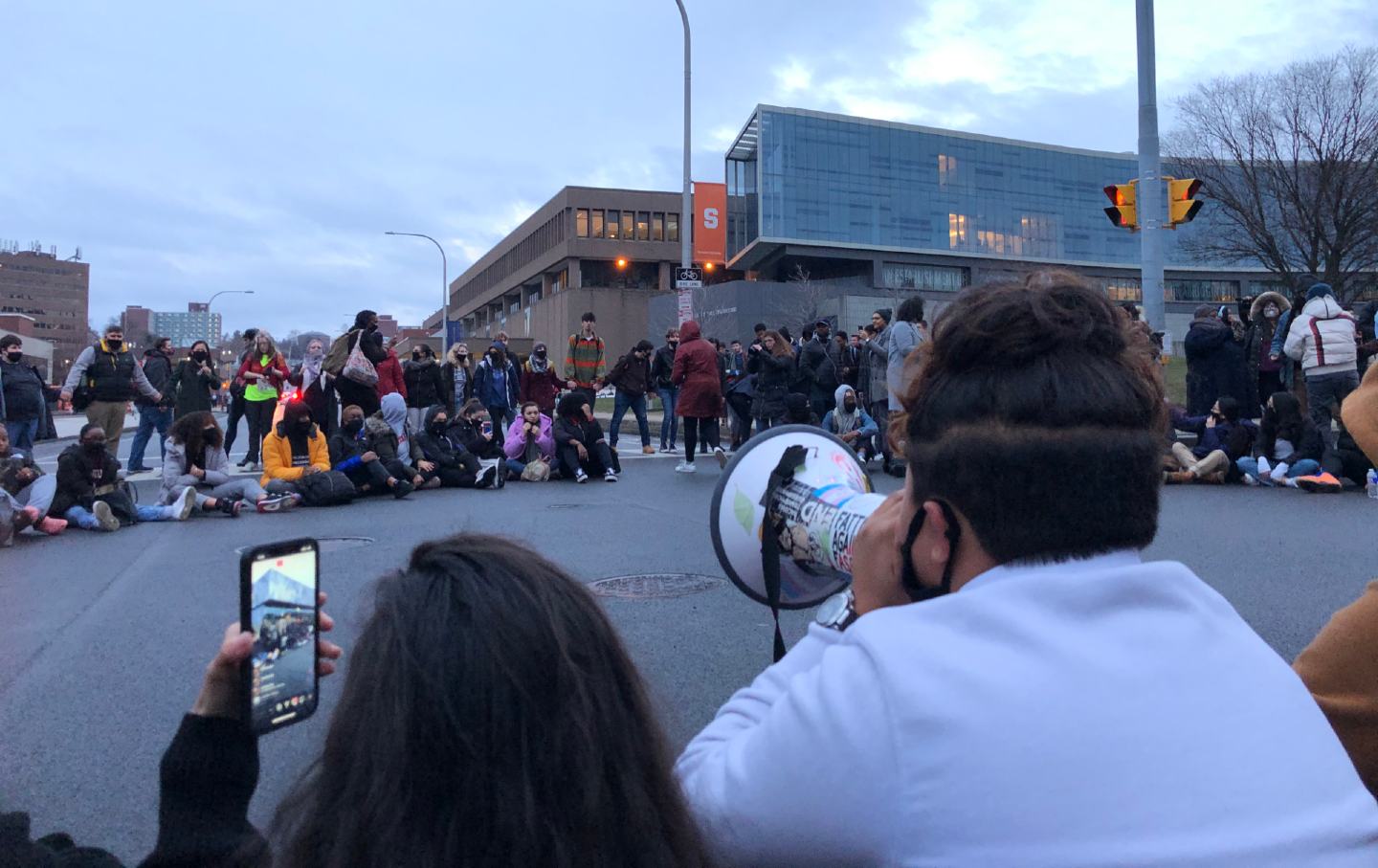 Students at Syracuse University block a road on campus during the #NotAgainSU protests. (Max Kalnitz)

Syracuse, New York—As of March 4, a group of more than two dozen students, under the name #NotAgainSU, have led a 15-day occupation of Syracuse University’s administration building, Crouse-Hinds Hall, with plans to continue doing so until its demands are met.

The sit-in, which includes anywhere from 30 to 100 protesters every day, is the latest chapter in a tumultuous clash between students and administrators that began this past winter. The current occupation started on February 17, in an effort to renew last year’s protest of the 30 racist, anti-Semitic and biased-related incidents that have occurred at or near SU since early November.

As a result of a previous eight-day sit-in at the university’s health, wellness, and recreation complex in November, Chancellor Kent Syverud signed 16 of the group’s original 19 demands with revisions to the remaining three; protesters rejected this as insufficient. In the time between the end of the last protest and the current occupation, administrators have already enacted some of the protesters’ requested changes. Protest organizers have also met with members of SU’s Board of Trustees to discuss the group’s demands and, most recently, have offered to negotiate with the university.

The renewed protest launched on February 17, with protest organizers reading an updated list of 18 demands and six addendums for the university to adopt. (On February 25, they released 10 additional demands in response to the university’s treatment of the protesters occupying Crouse-Hinds Hall, bringing the total number of demands to 34). Their new demands again call for the resignation or removal of Chancellor Kent Syverud, DPS Chief Bobby Maldonado, DPS Associate Chief John Sardino, and M. Dolan Evanovich, senior vice president for enrollment and student experience. Protesters argue that the four officials have failed to address and therefore contributed to the bias-related incidents by not arresting or publicly identifying any of the perpetrators of the racist incidents. In an e-mail sent to the student body on February 25, Syverud wrote that three students were identified and held accountable for the protests so far. Because SU’s student conduct process is confidential, no identities have been revealed. As well, in November, the university placed four members of Alpha Chi Rho fraternity on interim suspension after members shouted a racial epithet at a black student.

After occupying the building past its closing time on February 18, more than 30 students received suspension letters, effective immediately, for trespassing in Crouse-Hinds Hall—which, like all of SU’s campus, is private property. The specific type of suspension they received, called “interim suspension,” is “based on the determination that the safety and well-being of the University community or specific persons are at risk,” according to the Office of Student Rights and Responsibilities. While student protesters say they were being punished for exercising their right to peacefully protest, the university argues that the students were breaking the school’s code of conduct.

Shortly after the suspension letters were sent out, The Daily Orange reports, the university accidentally sent out four suspension letters to students who were never at Crouse-Hinds, raising questions about how university officials identified student protesters inside the building—DPS officers asked for students’ IDs but they refused, according to protesters.

Zoe Selesi, a sophomore at SU, was one of the four students who received an accidental suspension. She participated in #NotAgainSU protests in November and, though she has been interviewed by the media about her involvement, was not at Crouse-Hinds on the evening of February 17. She said the mix-up felt like a “joke,” but she isn’t surprised by the university’s actions. “They were definitely racially profiling people who were in the building,” Selesi said. (Syeverud, in an e-mailed statement to the student body, has apologized, writing, “I am not proud of how last week’s events involving student protesters in Crouse-Hinds Hall were handled. I take responsibility and apologize to the students—especially those misidentified in suspension letters sent out.”)

Following the suspensions, a tense standoff between student protesters, DPS officers, and university officials played out over the next two days. DPS closed Crouse-Hinds Hall, only allowing students, faculty, and staff with swipe access to enter. Positioning officers at each of the building’s entrances, the university prevented people, food, and other supplies from entering the building. Some protesters said they went 12 hours without eating, until a faculty member with swipe access sneaked sandwiches in for the students. Videos posted to #NotAgainSU’s social media accounts show multiple instances of DPS officers’ placing their hands on students trying to enter the building and, in one instance, an officer reaching for his gun. The university said it wasn’t trapping students in the building, stating they could leave at any time but would not be allowed to reenter.

According to one protester, whose name has been withheld at their request, Crouse-Hinds Hall is symbolic of many of the issues the group is fighting against. It houses the offices of Syverud and Evanovich, and it is where THE General Body staged an 18-day sit-in in 2014 to protest myriad issues. “This building symbolizes a lot of the student body; we were cognizant of that when choosing this building and the university is also cognizant of that,” the protester said. “They’re trying to silence us again. [They tried] to put suspensions on us as a way for us to stop fighting.”

Late on February 18, Rob Hradsky, senior associate vice president for the student experience, and other officials met with students inside of Crouse-Hinds, offering to revoke their suspensions if they ended their occupation immediately. The group said it would sign the agreement if DPS associate chief Sardino resigned and a meeting was scheduled between the group and SU’s Board of Trustees. University officials denied their requests, protesters said.

The building remained closed to the public until, during a University Senate meeting on February 19, Syverud lifted the interim suspensions against the protesters. He said Syracuse University is “on edge” and urged the community to step back. “These students are afraid they will be arrested and forced out of the building,” Syverud said. “They have suspension dangling over them. They are concerned about being fed. Enough. I am not going to let students be arrested and forced out of Crouse-Hinds Hall.”

Syverud reopened Crouse-Hinds Hall on February 20, after he announced that #NotAgainSU would be allowed to continue protesting inside the building.

In an e-mail to the student body, Syverud outlined three immediate actions the university will take to address protesters’ concerns: developing new protocol for faculty and deans to have greater involvement in and oversight over how SU handles protests; an independent review of DPS by former US attorney general Loretta Lynch; and an independent review of the Student Experience function.

Unlike other protest movements that fizzled out at the end of the academic year, #NotAgainSU protesters said they’re prepared to fight for as long as it takes to see systemic change at SU, arguing its members span from freshmen undergraduates to graduate and PhD students, plus support from faculty and staff. In response to the protesters’ suspension, hundreds of graduate students went on strike and petitions asking the university to lift the suspensions garnered thousands of signatures. Parents of students have also spoken out. On February 24, parents of #NotAgainSU protesters sent a letter to Syverud outlining their outrage and disappointment over “the administration’s tolerance of the inhumane treatment of our students as they exercised their right to peacefully protest on campus.”

One of #NotAgainSU’s goals is to make SU’s campus more diverse and inclusive for current and future students. But some people worry that the protests and the administration’s actions might hurt enrollment, especially of students of color. Jackie Orr, a sociology professor at SU, said a campus culture where individuals feel they can get away with racist incidents without punishment may give prospective students the wrong impression. “These kinds of repetitive incidents that are bad enough that they’re in the national news also create an image of a campus culture that will attract people who are precisely the people we do not want to attract at a campus that is struggling with racial justice, building educational opportunities for staff, faculty and students who come from historically marginalized communities,” Orr said.

Parthenia Gharavi is proof of this fear. Gharavi, a sophomore at SU, said she’s disappointed in the university’s history of handling hate crimes and how it has interacted with protesters over the last few months. She said she is in the process of transferring to another school. She said she knows several other people who are considering transferring out of SU. “I think that they really thought we were going to go away,” Gharavi said. “I think that they don’t have any other response because they’re not interested in solving the problem. They’re not interested in effecting real change. I think that they just want this to go away.… They don’t care enough to behave in a decent fashion, to treat protesters like the people that they are.”