The Rev. Jesse Jackson pays respects at the casket of George Floyd before a memorial service on June 4 in Minneapolis. (Stephen Maturen / Getty Images)

The Nation interviewed the Rev. Jesse Jackson on the night he returned from the Minneapolis funeral service honoring George Floyd, who was killed on May 25 while in police custody. Demonstrations were building in cities across the nation, and across much of Europe and Australia. Although the overwhelming majority were nonviolent, some were scarred by vandalism and violence. Cameras captured some police officers standing with the demonstrators, taking a knee with them, and others brutally dispersing them. Police violence has already taken more lives since the demonstrations began.

The reverend talked about how systemic and institutionalized racism in the United States has been the knee on the neck of black Americans for centuries. The following are excerpts of my conversation with the Reverend Jackson.

esse ackson: The outrage at the murder of George Floyd breaks open doors that have been locked for decades and opens new possibility. The justified rage, the expression of despair, opens the possibility of hope.

The context for the rage is clear. The pandemic—with African Americans disproportionately both its front line, “indispensable” workers, and its biggest victims—once more laid bare the glaring, institutionalized racial gaps in America. The economic collapse—with African Americans more likely to lose their jobs, to not have health insurance, to suffer hunger, to have children without the ability to learn online, to face eviction and foreclosure—once more exposes the structural racism of this society. This economic violence is also lethal.

Then add to this the cold-blooded murder of George Floyd by a Minneapolis policeman, photographed by a terrified and courageous 17-year-old girl. That made it impossible to ignore the reality of police violence against black people. The murder shocked people across the world, but police violence is an everyday reality for African Americans, particularly African American men.

Every city has its George Floyd. It is Eric Garner in New York: “I can’t breathe.” It is Laquan McDonald in Chicago, a murder caught on video that was covered up. It is Michael Brown in Ferguson, Missouri: “Hands up, don’t shoot.” It’s Breonna Taylor and now David McAtee in Louisville.

In Minneapolis, 92 percent of the police live in the suburbs. They are not neighbors; they are occupiers. The Code Blue shields them from accountability. The arrest and indictment of Derek Chauvin is the first time ever a policeman has been charged and arrested for murdering a black man in Minneapolis. Even in one of the most liberal cities in America, the police are cushioned, protected from accountability. 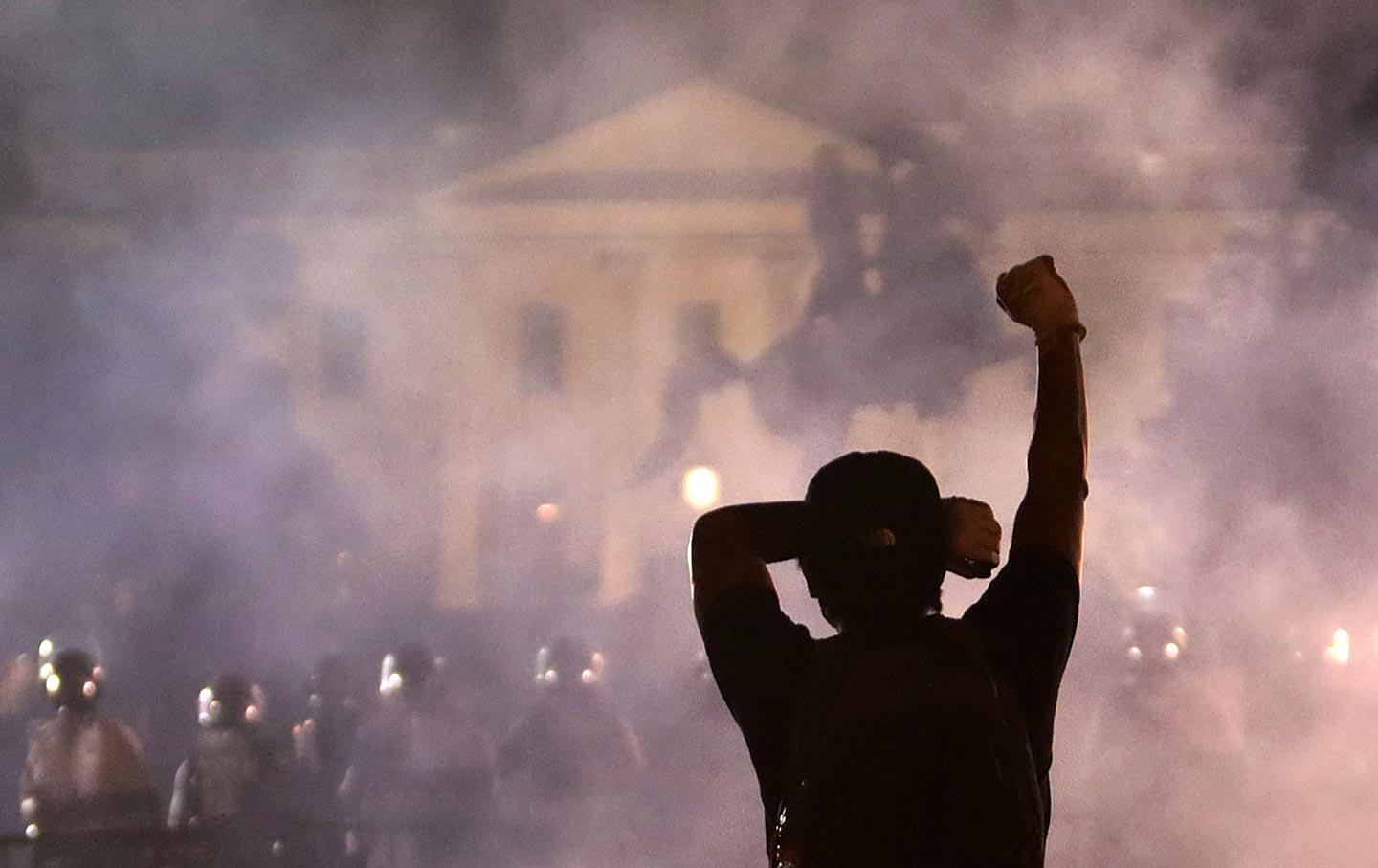 Protest over the police killing of George Floyd on May 31 outside the White House. (Alex Wong / Getty Images)

obert orosage: Police violence has been caught on camera before, followed by demonstrations and protests. Yet nothing changes. Do you think this will be any different?

JJ: These demonstrations are different—in ways both good and bad. These demonstrations are multiracial, multicultural, and multigenerational, young and old, black, white, brown, and yellow. We’ve never before witnessed so many white people marching to protest a black man being lynched. These are the largest multiracial protests in the history of America. They are saying that they will not put up with this violence.

For all the attention given to the vandalism and sporadic violence, the demonstrations are overwhelmingly nonviolent protests. People are outraged. They are sick and tired. But they have been remarkably disciplined even in the face of provocations. Instead of being scared off the streets by the violence or vandalism, or frightened by the police violence and Trump’s bluster, more and more have been coming out in nonviolent protests.

And demonstrations are taking place across the world. We really haven’t seen anything like this since the anti-slavery movement in Europe in the 1800s, and those gatherings were not nearly as large. The visible sight of a man being murdered in real time has triggered outrage wide and far.

The other thing that is new is more dangerous. We’ve seen evidence of the alt-right groups purposefully seeking to sabotage these demonstrations, causing vandalism, provoking violence. Whites from outside looking to spark riots either out of a hatred of authority or out of political calculation to discredit the cause or to start a race war. That reality makes the nonviolence of most of these demonstrators even more impressive.

RB: In the 1970s and 1980s, Nixon and Reagan used law-and-order campaigns to feed the backlash against anti-war demonstrations and urban riots. Clearly, Trump is trying to do that now. What can be done about that?

JJ: Violence is destructive and ineffective. Violence is diversionary; it always distracts from the message and undermines the change agenda. The vandalism becomes the issue, not the institutionalized violence against black people. Police brutality gets justified as a needed response, “law and order,” which only spreads lawlessness and disorder.

Trump wants to point to the violence to spread fear and to justify a crackdown by the police and the military. But to date, he isn’t succeeding. People are less ready to buy that argument. Trump is misreading the times. The video of the murder is too stark. The nonviolence of most of the demonstrations is too apparent. The pent-up anger at Trump’s callous carelessness in the face of the pandemic is growing. His efforts to divide us by spreading fear—against immigrants, against Muslims, denouncing demonstrators as “thugs”—are losing their force. Remarkably, Trump’s stunt in front of the White House—forcibly ejecting peaceful demonstrators for a photo op—was censured not only by civil rights leaders. The Episcopal bishop denounced his use of the church and the Bible as a prop. The most respected retired military leaders—including retired Marine General James N. Mattis, Trump’s former DOD chief—issued sharp criticisms. Instead of representing law and order, Trump was exposed as a threat to the law and the Constitution. 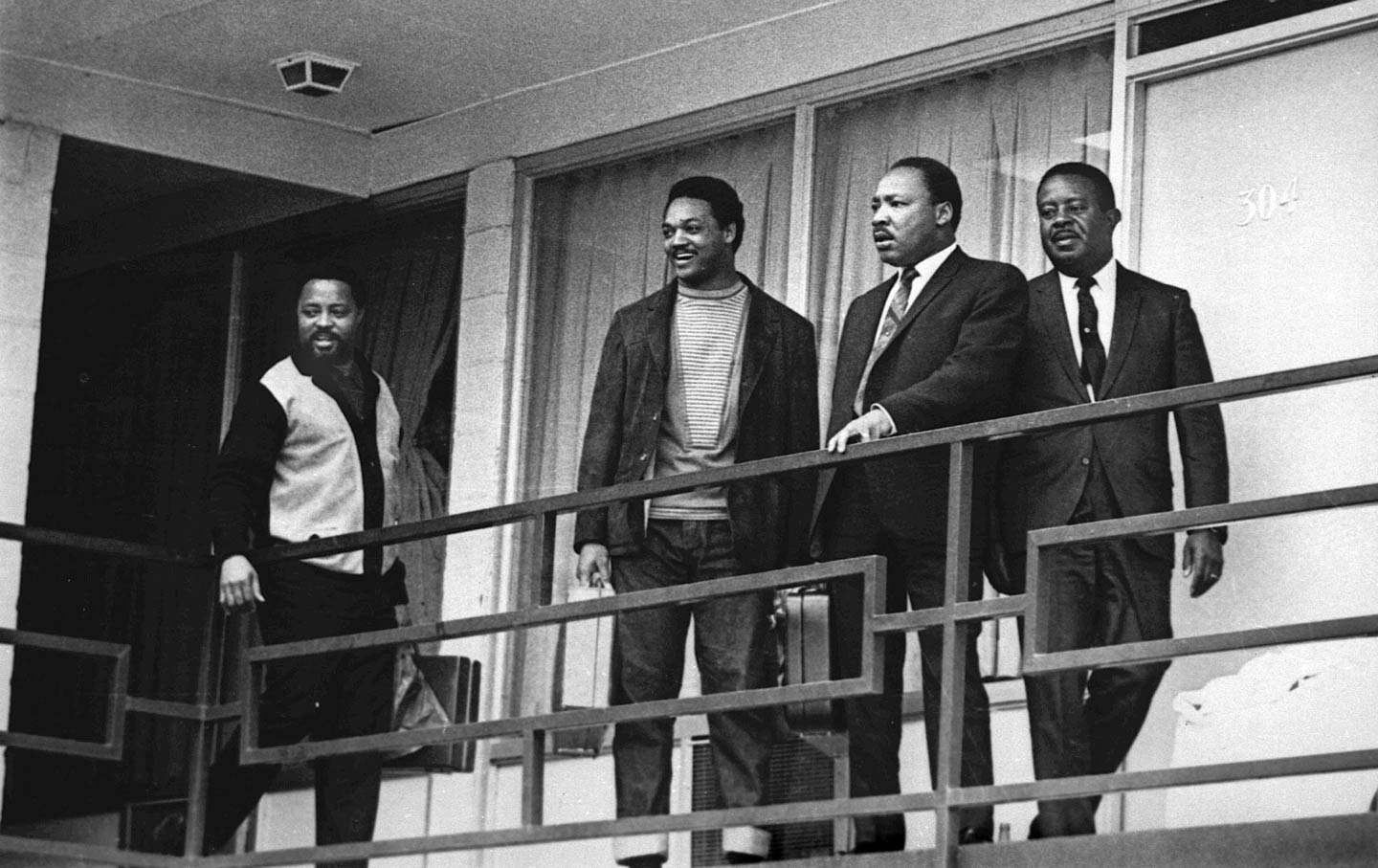 The Rev. Martin Luther King Jr. stands with (left to right) Hosea Williams, Jesse Jackson, and Ralph Abernathy on the balcony of the Lorraine Motel in Memphis, Tenn., a day before he was assassinated in approximately the same place. (Charles Kelly / AP Photo)

RB: You marched with Dr. Martin Luther King Jr., and were part of the great reforms of the 1960s. Now, more than half a century later, the police brutality, the structural racial disparities, the de facto segregation of our schools and neighborhoods, the obscene inequality seems as bad, if not worse. Do you have any hope that change might come?

JJ: I remain hopeful. We need a broader analysis. Police violence is real today. But remember, segregation was once the law of the land, embraced by the Supreme Court. The knees on our necks in all aspects of life were legalized. The Klan and the wave of lynching in the early 20th century literally drove African Americans out of the South. The trail of tears was a trail of blood and bloodhounds. Even today, there are more blacks from Mississippi in Chicago than there are blacks in Mississippi.

The civil rights movement transformed the Constitution. Segregation was outlawed. The Voting Rights Act gave blacks the right to vote. Yes, Nixon and Reagan led a reaction. The War on Poverty was lost in the jungles of Vietnam, but we can forge change.

In Minneapolis, the Cycle of Police Violence Continues

How I Fight Racism in the World and Within Me

Minneapolis May Have Rejected That Referendum on the Police

Now, a new generation is rising, with new energy and new hope. The Blue Code that has protected the police is exposed—in part because cameras literally record the reality and expose the cover-ups. People—white and black, young people particularly—are outraged—and demanding change.

There are deeper currents in politics, currents that can drive things in a very different direction. I believe we are at that turning point now. The pandemic, the mass unemployment, the extreme inequality, the police brutality out in the open, Trump’s ugly misrule—more and more people are intent on political change.

Now demonstrations must lead to action. Dr. King always taught that our protests must lead to policy changes, and to power. That’s why the right to vote was so important to him. This year, we have the Census—a count as accurate as possible is vital. We have the elections, where not just the presidency but the US Senate and over 4,000 seats in state legislatures are up for grabs with redistricting at stake in 2021. The deep recession shows we need major economic initiatives if we are not to sink into a depression.

Demonstrations should turn to pushing concrete policy changes. Pass anti-lynching laws at the federal and state level. Require changes in how policing is funded and done. Demilitarize our police forces. Revoke police immunity protections and set up independent review boards and prosecutors to prosecute brutality. And of course, it isn’t just police reform, but structural reforms needed to make this economy work for working people once more.

Change is possible. Ella Jones was just elected the first black mayor of Ferguson, Missouri. Representative Steve King, the racist Republican from Iowa, was shunned and defeated in the Republican primary. Liberal Democrats in Minneapolis may have failed us for years, but Keith Ellison, the progressive African American leader elected as the state’s attorney general, stepped in to indict and jail Chauvin and his accomplices for murdering George Floyd, the first time a white policeman had ever spent a night in jail for brutalizing a black man in Minneapolis.

Keith Ellison on Police Brutality: ‘We Need a Vision That Says There’s Going to Be Accountability’

The protests can lead to policy changes and political changes. The elections this fall offer a chance not only to throw out Donald Trump and the Republican Senate, but to elect more change agents at every level of government, and to change the attitudes of those who have previously stood in the way.

Reality—the pandemic, mass unemployment, extreme inequality, institutionalized racism, climate change—can’t be addressed without fundamental change. If Trump and McConnell are ousted, the rout of the right could open an era of reform that is likely to far exceed the limits of our current debate. A rising generation of new leaders—like the young progressive legislators in the House, the progressive attorney generals across the country, the new generation of black and Latino mayors in major cities—will be able to use the currents of change to drive significant reforms.

Voting is important—that’s why Republicans spend so much energy trying to suppress the vote of African Americans and Latinos. Voter registration is a militant idea. But voting is not enough. Those marching today must continue to demand change and to hold accountable officials who fail to deliver it. Protests like these can set the stage for change. Elections can put new people in office. But it will still require citizen mobilization and pressure to overcome the resistance to change—and to counter the reaction that surely will follow.