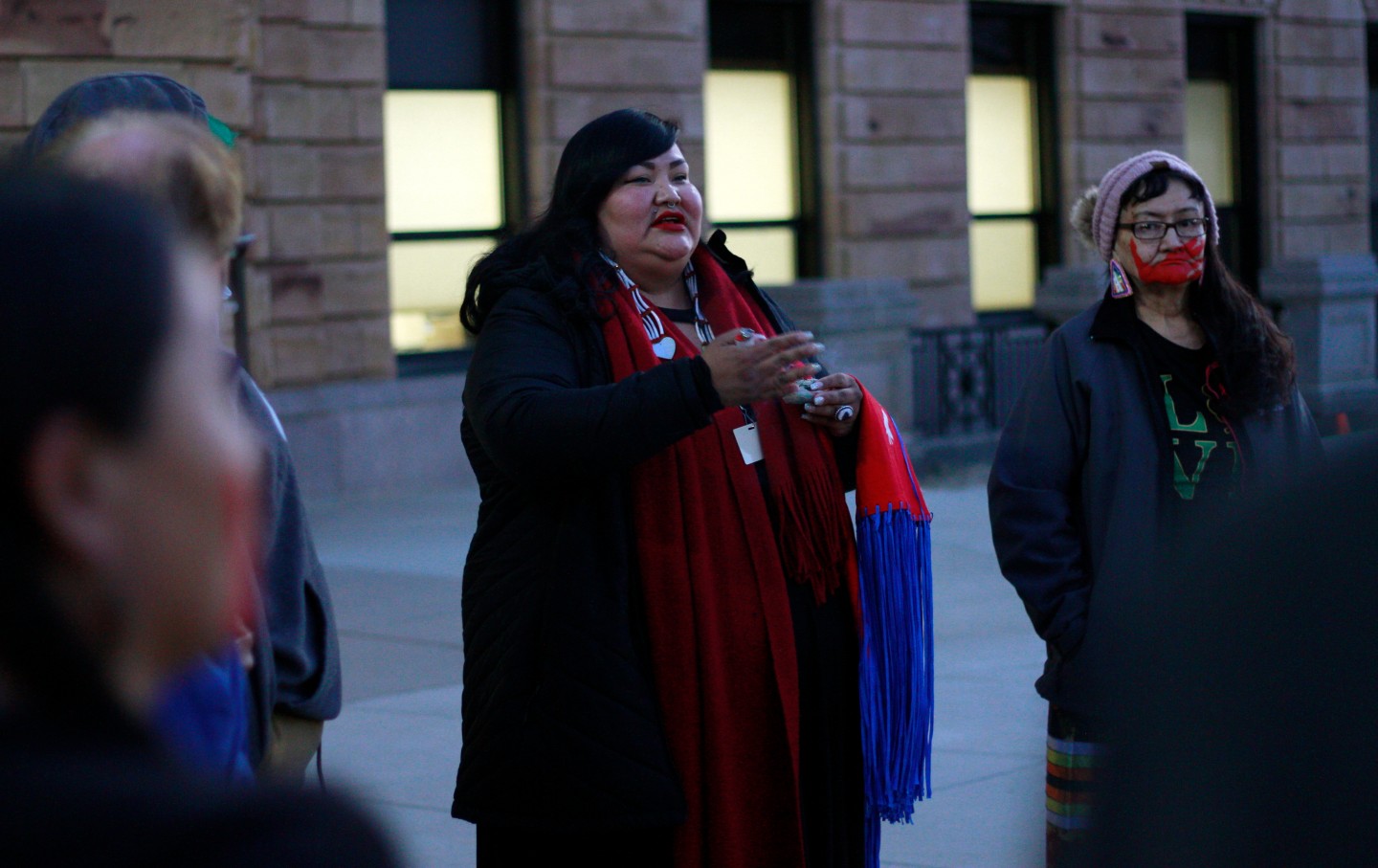 Covid-19 is providing cover for other forms of violence. While mutual aid projects (and calls for housing and health care for all) spring up across the country, conservatives in state legislatures remain fixated on regulating trans bodies. Last week, the Idaho Senate passed one bill banning gender changes on birth certificates and another prohibiting trans girls from competing in women’s sports; a third bill that would have made it a felony to provide gender-affirming care to trans youth died in committee.

Each of these measures can be traced back to South Dakota, long a testing ground for anti-trans legislation. In 2016, the state introduced one of the first “bathroom bills” which, while vetoed, paved the way for a chain of legislation seeking to prevent trans people from using the restroom that corresponds with their gender identity. Soon after, South Dakota Republicans began targeting trans high school athletes. (This “sports bill” also failed, but has been followed by nearly identical measures in more than 15 other states.) At the beginning of this year, House Bill 1057 sought to criminalize medical care for trans youth. (In almost a dozen additional states, including Idaho, legislators have proposed similar laws.)

But these bills, according to indigenous activist Candi Brings Plenty, are pieces of a larger puzzle: For centuries, the gender binary has been tied up in white supremacy. The regulation of gender was even part of the genocidal conquest of the Americas. In 1513, Vasco Núñez de Balboa set his dogs on 40 Cueva Indians for “sodomy,” believing them to be men assuming the roles of women. Beginning in the 1870s, over 100 state-sponsored boarding schools sought to forcibly assimilate Native American communities, which included eradicating “two-spirit” identities—a modern, umbrella term coined in the early 1990s to refer to LGBTQ+ people across Turtle Island (First Nations folks from Canada, indigenous people in Mexico, and Alaska Natives and American Indians from the United States).

For Candi Brings Plenty, the indigenous justice organizer for South Dakota’s ACLU, this reality is at the core of her work. Anti-trans movements, she explained, must be regarded as part of systems that seek to steal land and silence peoples and customs.

Brings Plenty is a two-spirit Oglala Lakota Sioux who grew up in the Black Hills and on the Pine Ridge Reservation. I spoke with her by phone a few days after HB 1057 was effectively killed in the Senate. Our conversation has been edited for clarity and length.

Newish and Jewish: An Interview With ‘Currents’ Editor Arielle Angel

The West Does Not Have a Copyright on Justice

Taliah Mancini: I want to start by asking you about South Dakota’s recent bill that threatened medically necessary care, like puberty blockers and hormones, for trans youth. Why did you testify, and what did the organizing against the bill look like?

We’re defining what indigenous justice looks like. Before we can have any social justice impact, we have to be accountable for indigenous justice because that was the first injustice on Turtle Island. What gets left out is that colonization was the theft of our land—and that it also included eradicating the role of two-spirit people.

TM: Before joining the ACLU, you led efforts against the Keystone XL Pipeline and Dakota Access Pipeline, including leading the two-spirit encampment at Standing Rock. You’ve also done work surrounding murdered and missing indigenous women. Can you expand on why indigenous justice work is interconnected with the fight for trans and feminist justice?

CBP: I really believe that Standing Rock broke [the door] open for folks to feel safe and capable to use their voices and platforms without fear. I know that it empowered the act of compassion, which is one of the biggest virtues in indigenous walks of life. Having the largest gathering of nations empowered us to have a humanitarian component in the work that we do. I knew that [the two-spirit camp] would be the biggest impact I could have as a two-spirit activist: to claim our space and to have an opportunity not only to be visible but to create a movement within the movement.

TM: You have talked, before, about how there is a correct way to do this. What does it mean to follow traditional protocol when reclaiming sacred spaces?

CBP: I have been raised by Lakota culture and spirituality. Regardless of age or gender or stature in the community—regardless of whether it is on the battlefield or social gatherings or traditional ceremonies—there are protocols that have to be honored. When we’re following protocol, we are seen as people who are carrying the tradition of how to conduct appropriately and according to our ancestors. Growing up in my culture, I knew and witnessed the folks who protected those protocols. They were able to speak when other people weren’t, so I learned to honor and respect our ceremonies because that gave me the opportunity to speak. To follow protocol opens doors in places where they hadn’t been.

TM: Understanding what it means to be two-spirit is central to understanding your fight. What has your process of coming into your politics looked like?

CBP: Even just in the United States, there are over 580 federally recognized tribes. So, the term two-spirit was coined to encompass a cultural identifier for LGBTQ+ folks from Turtle Island who hold a cultural role within the walk of life. The term acknowledges that every tribe, every indigenous culture, has their own language and spiritual role—and that there is an honored space for two-spirit folks. And there always has been, since before first contact.

I am very much a product of my parents who were survivors of the boarding school era. I quickly learned about the boarding schools, and heard the stories of how both my parents were abused by the Jesuits and the Catholic Church. I was raised to know that I had my own identity, that I had my own culture and spirituality and language, and my own connections to my ancestors; and, I was raised to know that my parents were traumatized and survived what assimilation attempted to steal from them and me. I know that as we grow, we grow in our activism. We continue to blossom, to shed those layers of assimilation and colonization that our ancestors lived through.

TM: How has this informed your thinking about the uses and limits of legal battles?

CBP: From the moment that I was informed that I received this position, my platform was, and is, to evolve the front lines. Being at Standing Rock for 11 months, I was brutally beaten, and received all the intentional psychological abuse that they were intending for water protectors and folks who were at Oceti Sakowin and Standing Rock. I endured that, and it helped me have this perspective of what it means for water protectors to organize. I’ve always had a tribal political view of what that looked like because I was raised by my father, who was on tribal council for over 20 years. My father always empowered me; he said, “If you’re going to be a leader, you put the people first. You’re only standing in the front so that you can hold the people up, so that you can endure the hard part so the oyaté [the people] doesn’t have to.” I had a dislocated elbow, I had hypothermia, I had a cracked tooth; I still have this permanent egg-bump on my forehead from scar tissue. Whether it’s protecting protocol for ceremonies or empowering and bringing visibility to two-spirits, it’s always about protecting the sacred so that our future generations don’t have to.

TM: What do you tell two-spirit kids and advocates, who are looking to build strong communities in the face of all this?

CBP: I often talk about the tipi: one of the geometric structures that was gifted to us in a spiritual way. Each tipi pole represents a family member. I talk to youth, I talk to adults, and I tell them: You are the blessing in your family, and every family has a two-spirit member, or LGBTQ+ member, whether it’s an uncle or auntie, a relative or cousin, a sibling or a parent. There is a place for each person in that family construct. If one of those tipi poles was missing, that tipi would not be able to stand. In our culture, in the northern plains, the natural disaster is a tornado. The tipi was gifted to us because the wind goes through and up and out. The tipi doesn’t get knocked over; but if one of those poles is missing, then the circle isn’t complete. I tell folks to hold on to their identity, to honor themselves, and to wholeheartedly empower the identity that they walk in. It is OK to be the rainbow buffalo of your herd.