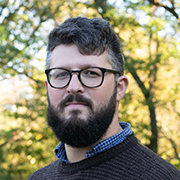 Richard Kreitner is a contributing writer and the author of Break It Up: Secession, Division, and the Secret History of America’s Imperfect Union. His writings are at www.richardkreitner.com.