Francia Márquez Mina, 39, has defended Black and Indigenous land rights in Colombia since she was a teenager. She’s taken on multinational corporations, the government, and paramilitary groups. It’s a hazardous calling. A recent Global Witness report found that in 2020, for the second year in a row, Colombia had the highest number of deaths of environmental activists: 65.

Márquez has survived one assassination attempt, fled her home twice, and been subjected to countless death threats. She showed us a July 2019 text message that read: “Each and every one of your collaborators, black sons of bitches, are declared a military target, just like all those who protect you.… You are going to die.”

Now, Márquez has done something even more dangerous: She’s decided to run for president.

“Political participation for women like me is not easy, especially when we are willing to disrupt the status quo. It is dangerous. I thought about it before making this decision to run,” she told us. “But defying fear is part of accessing justice and it is what I have been doing all my life.”

When she announced her intention to run for president in mid-August 2020, Márquez had just spent days consoling the mothers of five young Black men who had been targeted and killed by paramilitaries. It was at that moment, Márquez said she decided to take her fight to Colombia’s biggest stage. She tweeted: “I want to be President of this country. I want our people to be free and dignified. I want our people to be able to freely exist in their cultural diversity, for our territories to become spaces of life and for our children to live without fear of being murdered.”

Márquez is the first Black woman to formally run for president. And her campaign has resonated among young people, women, the working class, and Black and Indigenous voters. Among the six candidates running in the leftist coalition Pacto Histórico, she is polling only behind the leading progressive candidate and previous presidential hopeful, Gustavo Petro. The candidate who comes in second in the primary will be placed on the vice-presidential ticket, according to the Pacto Histórico’s agreement. The success of Márquez’s historic campaign reflects mounting disillusionment with political structures and norms that have dominated Colombia since its founding.

“Our whole lives we’ve been told that the only people who can occupy spaces of power are wealthy, white or mestizo men,” Márquez said. “Now is the time to say that despite not being rich, despite not being white, we can occupy those spaces and transform politics as usual.”

The Márquez campaign is fueled by the same anger as the protests that erupted across the country in late April. Although the immediate catalyst was a tax-reform law, social unrest had been building for years. In the countryside, many were angry over the government’s failure to fulfill the 2016 Peace Accords, which were supposed to end years of fighting with rebel groups. In the cities, the pandemic exacerbated already stark inequality. And Covid-19 deaths kept rising as the government fumbled its response. When Colombians took to the streets, police attacked them. A month into the protests, security forces killed more than 60 civilians. Over 100 protesters are still missing.

With Colombia’s presidential elections less than a year away and the government’s approval ratings at an all-time low, politicians from across the political spectrum recognize Colombians are demanding political change. But Márquez was the only candidate who joined the protests day in and day out, which appeals to the young people with whom she marched.

Márquez grew up in La Toma, a region in southwest Colombia with a majority Afro-Colombian population. Her family and community relied on subsistence agriculture and artisanal mining to survive generations of government neglect and marginalization. The people of La Toma have a close relationship with their land, and it was protecting it that first led Márquez to political activism.

“Once slavery was abolished, we were never compensated. The slave owners were compensated.… Afro-descendant communities have the lowest levels of basic rights and services. We don’t have access to water, to health. These were territories that were forgotten,” Márquez said in an interview with Democracy Now! in 2018.

In the early 2000s, as a teenager, Márquez fought against a project to dam the Ovejas River in southwest Colombia, which would contaminate her hometown Yolombó’s only source of drinking water.

“The Ovejas River is a place of community and subsistence. For us it is life, and as such, it is priceless,” Márquez told us. “We all used to say: ‘We are going to continue to resist, because it’s the only thing we know how to do.’”

By her 20s, Márquez was taking on multinational mining corporations authorized by the Colombian government to displace her and thousands of other mostly Black Colombians. Márquez and others constructed barricades along the hills leading up to their homes to block police and military units. According to Márquez, the government labeled the organizers resisting the mining company’s plans as subversives “standing in the way of progress.” Paramilitaries called them guerrilla sympathizers, and they soon started receiving text-message death threats. One night, three men appeared at Márquez’s home at 2 am looking for her. Fortunately, she was away.

In December 2010, after a long legal battle, the Constitutional Court ruled in favor of Márquez and her community and revoked the mining title. Soon after, Márquez, a single mother of two young children, enrolled in law school to better position herself for what she anticipated would be many more legal battles.

Just three years later, unauthorized miners from across Colombia descended upon La Toma. They set up illegal mining sites, contaminating the water used for fishing and drinking. A few months after their arrival, in November 2014, Márquez led 80 women on a 10-day, 350-mile march to the capital city of Bogotá. The women protested in the streets for 22 days. The protest culminated with the Colombian government agreeing to intervene and remove the illegal miners from the land. 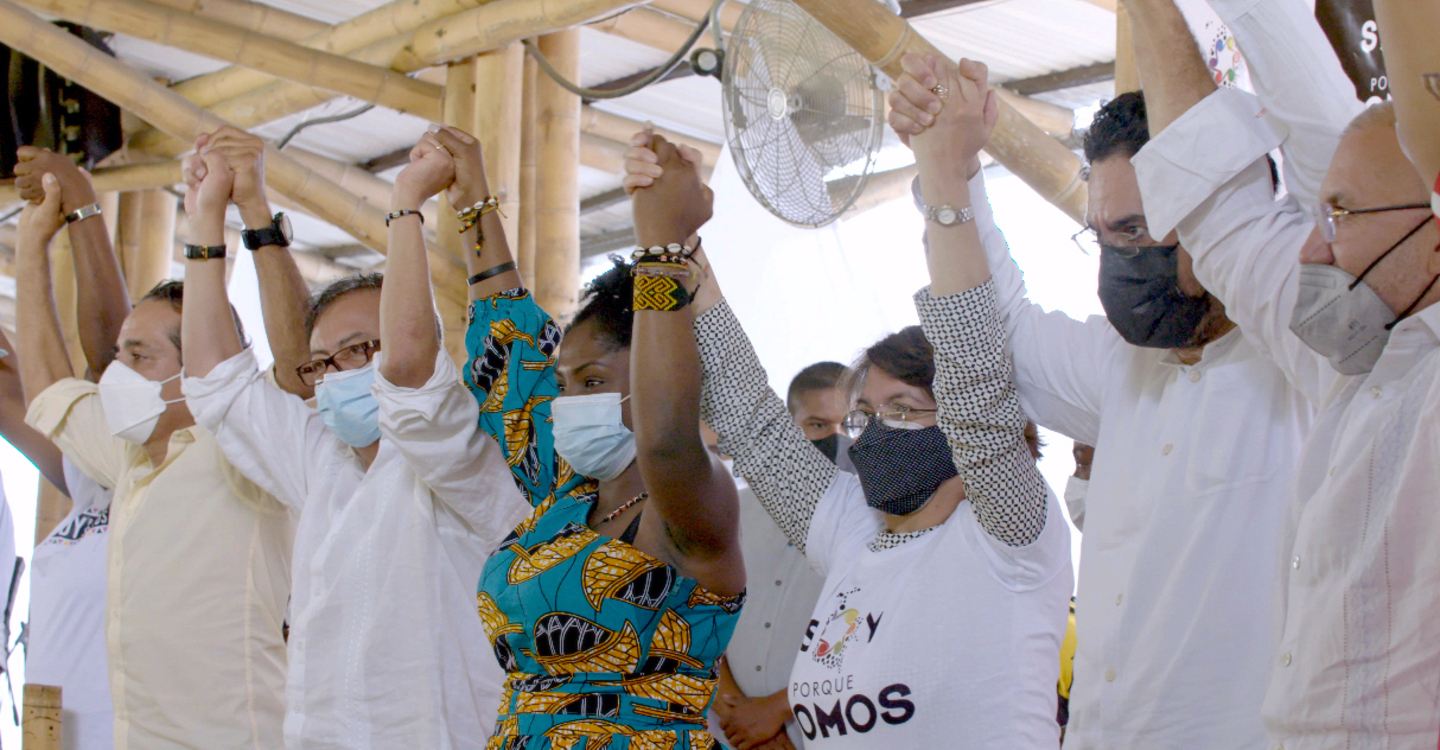 Francia Márquez during the official announcement that she will join the Pacto Histórico on July 20. (Karen Gomez)

Eventually, Márquez took refuge in Agua Blanca—an impoverished district in the city of Cali—with hundreds of thousands of others displaced by conflict.

Years of Márquez’s environmental activism catapulted her into the international spotlight and made her a target of both paramilitary groups and the government. In 2018, Márquez won the Goldman Environmental Prize. A year later, in 2019, Márquez survived an assassination attempt while she and other Afro Colombian activists were meeting to discuss a treaty with the Indigenous communities in the Cauca region. Márquez said men attacked the group with grenades and firearms.

With her presidential run, Márquez has further provoked the government and paramilitary groups. “We have received hundreds of threats from paramilitary groups that say they declare us a military objective, because we are opposed to development,” Márquez told us. “What development? In the name of development, they enslaved my community. In the name of that development, we have lived in impoverished conditions, and that is why we have decided to fight to defend that territory, which sometimes implies putting at risk even life itself.”

Roosbelinda Cárdenas, an anthropology professor at Hampshire College and author of the upcoming book Raising Two Fists: Struggles for Black Citizenship in Colombia, compared Márquez to Alexandria Ocasio-Cortez and other members of the Squad. “Like the radical women of color who have dared show up in the US Congress ‘as equals,’ Francia Márquez’s very presence in Colombia’s presidential elections rattles the status quo,” she said. “Francia’s candidacy is the seismic shake that we need to lift us out of the politics of death that is engulfing us.”

That Márquez, a poor, rural, Black woman is sharing a debate stage on national television with candidates from entrenched and politically seasoned families is already revolutionary. During a campaign event, a supporter hugged Márquez and said through tears, “I hope that all your thoughts continue to be pure and true and that you will go on and set foot where we someday hope to walk.”

Moments like that, Márquez said, have become common: “I’ve encountered folks on the street, older folks, who tell me, ‘I thought I would die without seeing a Black person seriously aspiring to be president of this country.’”

Whatever the outcome of the election, the environmental activist from La Toma has ignited a movement of women and young people advocating for change. Still, as her influence grows, so do the risks: She told us that just “staying alive is a victory.”