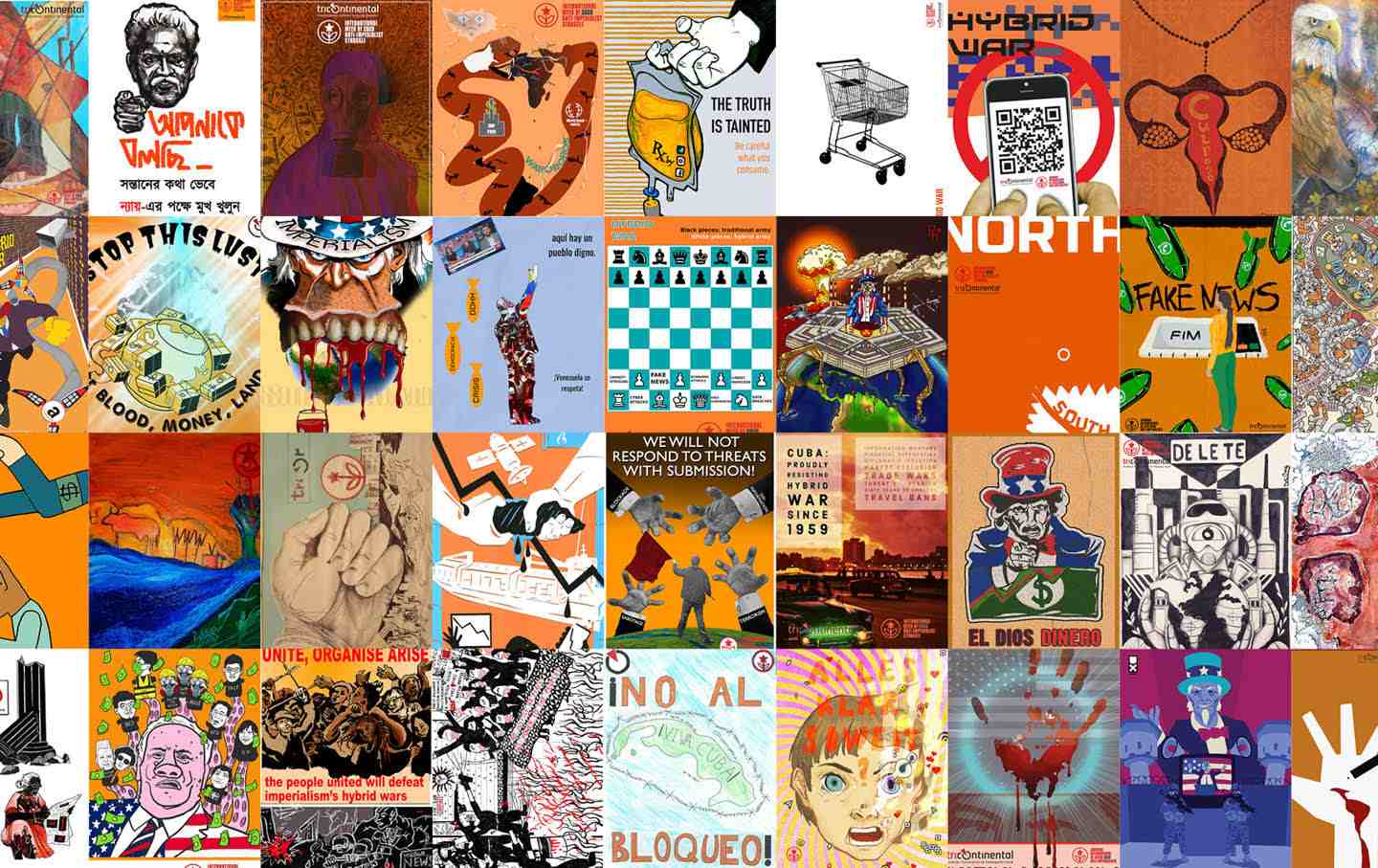 In the pandemic year, artists from 30 countries have created posters reflecting the defining crises of our time. (Collage: Tricontinental: Institute for Social Research)

hatting with a friend in aghdad—I’ve been calling friends around the world to ask them how they are doing in the pandemic. Abbas, a veteran reporter in Baghdad, says that there have been over a million confirmed cases of Covid-19 in Iraq, and he does not know anyone who has been vaccinated. Journalists, we joke, using Trump’s phrase, are “enemies of the people” and not essential workers. “Not sure when I’ll get a vaccine,” Abbas said.

Conversations with Abbas meander into the necessary topics. US troops are pulling out from Afghanistan. There are only 2,500 of them left. What will remain when they’re gone are all kinds of mysterious assets: trainers, private contractors, ghost advisers (namely, from the CIA). No one knows how many of those there are, and few talk about it. Abbas tells me that after the Iraqi Parliament refused to let US troops linger in Iraq, such contractors (and the CIA) remained, many of them in the Kurdish-dominated north. This past February, a missile strike that hit Erbil airport was directed at these US assets. “Two strategic defeats for the United States,” Abbas says. In Iraq’s case, the advantages of the US withdrawal certainly went immediately to Iran, which has close relations with a large section of the Iraqi government; but the advantage also came to Iraq, whose confoundingly compromised government is nonetheless trying to exert some sovereignty over the fractured country. In Afghanistan, who will be in charge? Certainly not the titular leader of the country, Ashraq Ghani, who is—as they used to say about Hamid Karzai—merely the mayor of Kabul. There is a lot of jockeying for influence: among the Muslim Brotherhood states of Qatar and Turkey, and of course India and Iran. There’s been little mention of China, but it has an interest in a stable Afghanistan so as to build its Belt and Road Initiative linking China’s Pacific coastline to Europe. “These are the Vietnams of our time,” Abbas says.

Nothing is so clear. As we talk, the muezzin from the Razavi Mosque calls the faithful to prayer, his loudspeaker jarringly near. Abbas lives in what used to be called Saddam City, the bulwark of the old Iraqi Communist Party. It is now largely beholden to forces loyal to the Sadr movement and its many factions. Older left orientations have dwindled away over the past two generations. There is a 1951 report written by Haji Yousuf Chang to the US government asking Washington to finance an insurgency against communism not only in China but across Asia. I quote it in my book Washington Bullets. A decade later, Saudi Arabia’s royal family would do just this (with CIA backing) through the World Muslim League. There was large-scale attraction to left-wing ideas then. The promotion of a Saudi variant of Islam was used to divert it. This is exactly what undermined the communist movement from Lebanon to Iraq, and now into the Xinjiang Uyghur Autonomous Region of China. The muezzin’s call, beautiful in its resonance, carries our conversation along, to the new information war about Xinjiang. Abbas laughs, “Never thought I would see the day when the United States becomes the defenders of Muslims.” I remind him that Ronald Reagan called the Mujahideen “freedom fighters.” These are the worst elements in Afghanistan. “Yes,” he says, “we fell for it then, and we keep falling for it over and over again.”

Falling for it. Yes. During one of my first conversations with Abbas, more than a decade ago, we spoke about an event that has receded from public consciousness. The Human Rights Caucus of the US Congress held a hearing on October 10, 1990, on the Iraqi occupation of Kuwait. The most powerful testimony came from a young girl named Nayirah. She spoke about seeing babies removed from incubators, left on the cold floor, as the incubators were whisked to Iraq. It was a searing image. The story was repeated by the press and by politicians to drum up support for bombing Iraq in 1991. A year after the Gulf War, John MacArthur revealed that the young woman, Nayirah al-Sabah, was the daughter of Kuwaiti Ambassador Saud al-Sabah—and the entire atrocity had been cooked up by a Kuwaiti government front group called Citizens for a Free Kuwait and the PR firm Hill & Knowlton (with help from the CIA). There was good reason to oppose Saddam Hussein and the Iraqi invasion of Kuwait, but this was not one of them. This was a pack of lies.

Something in the story about atrocities in Xinjiang smells like that public relations operation in 1990. The man at the center of the latest “information” is connected to the US-backed Victims of Communism Memorial Foundation and to the Jamestown Institute, which has links with US intelligence. His evidence looks detailed and rational, but even a slight inspection shows great anomalies. Whereas until yesterday no one in the West knew anything about Xinjiang—the world’s largest cotton producer, two and a half times the size of France—now everyone spits out “genocide” and “forced labor” without hesitation. Abbas and I think about the shallowness of media concern for the way information is managed. “Remember the time when they said Gadhafi was doing genocide in Libya?” he says. After the Libyan war, human rights groups studied the facts on the ground and said there was no evidence for that. Words like “genocide” are routinely weaponized in the wars of our time.

The United States is notionally pulling its troops out of Afghanistan at the same time as it seems to be deepening its commitment to military action against China. Abbas laughs. “If they could not subdue us,” he says, meaning Iraq, “how will they fare against China?” It is true. But we are dealing with callous people who have contempt for world health. If they want a war, they might get a war.