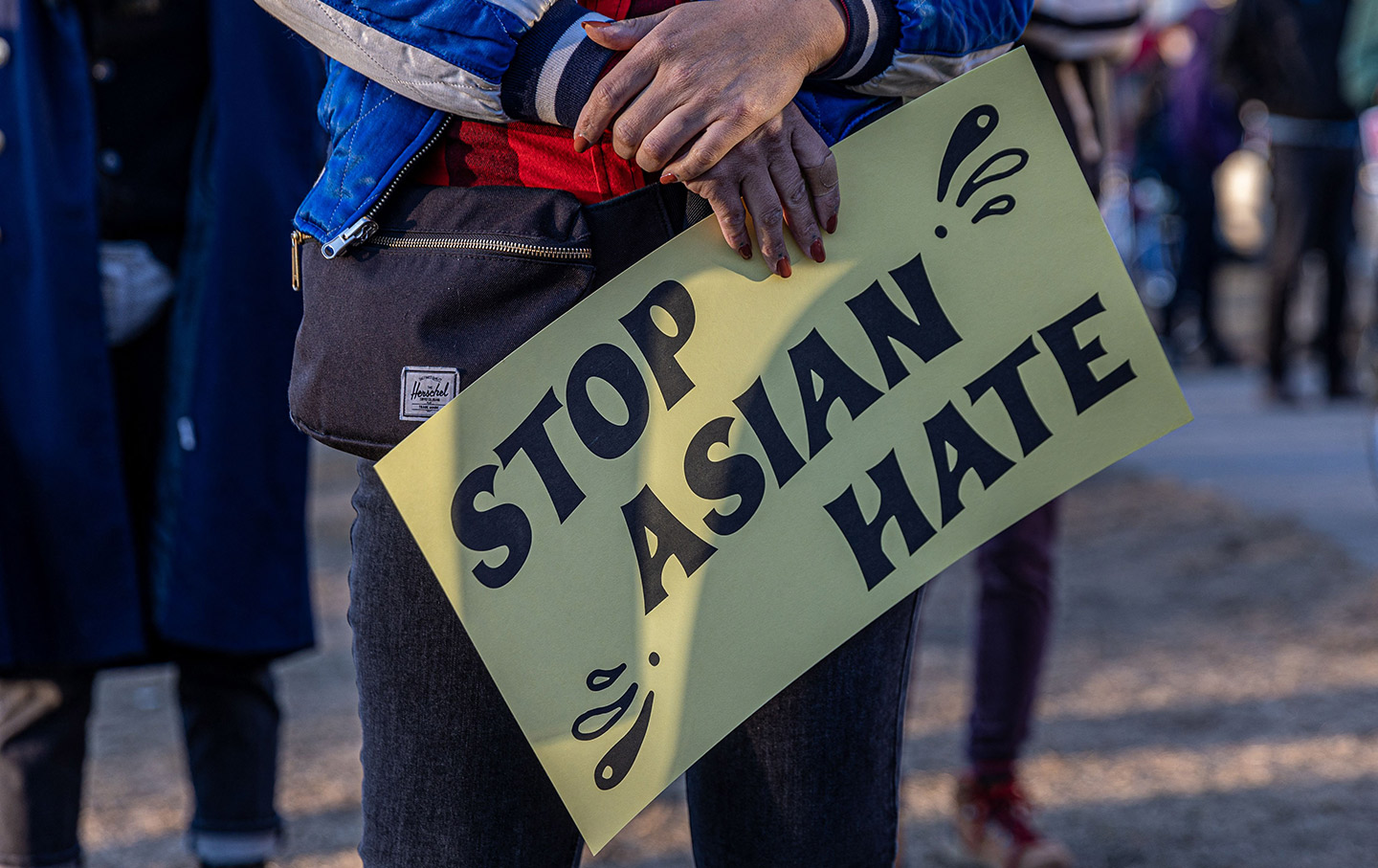 A person holds a sign during the Asian Solidarity March rally against anti-Asian hate in response to anti-Asian crime on March 18, 2021, in Minneapolis, Minn. (Kerem Yucel / AFP)

Shortly after the mass killing in Georgia—including six Asian women—earlier this week, US Secretary of State Antony Blinken denounced the violence, saying it “has no place in America or anywhere.” Blinken made the comments during his first major overseas trip to Asia with Defense Secretary Lloyd Austin, where Blinken warned China that the United States will push back against its “coercion and aggression,” and Austin cautioned North Korea that the United States was ready to “fight tonight.”

Yet such hawkish rhetoric against China—which was initially spread by Donald Trump and other Republicans around the coronavirus—has directly contributed to rising anti-Asian violence across the country. In fact, it’s reflective of a long history of US foreign policy in Asia centered on domination and violence, fueled by racism. Belittling and dehumanizing Asians has helped justify endless wars and the expansion of US militarism. And this has deadly consequences for Asians and Asian Americans, especially women.

Anti-Asian violence through US foreign policy has manifested in the wars that have killed millions, torn families apart, and led to massive displacement; in the nuclear tests and chemical weapons storage that resulted in environmental contamination in Okinawa, Guam, and the Marshall Islands; in the widespread use of napalm and Agent Orange in Vietnam, Laos, and Korea; in the US military bases that have destroyed villages and entire communities; in the violence perpetrated by US soldiers on Asian women’s bodies; and in the imposition of sanctions that result in economic, social, and physical harms to everyday people.

These things can’t happen without dehumanization, and this dynamic has had dire consequences for Asian Americans, especially women. Of the 3,800 hate incidents reported against Asian Americans last year, almost 70 percent were directed at women. Exoticized and fetishized Asian American women have borne a dual burden of both racism and sexism, viewed on one hand as submissive and sexually available “lotus blossoms” and on the other as manipulative and dangerous “dragon ladies.”

Asian women are particularly harmed by US militarism and foreign policy—economically, socially, and physically. In Korea, women have long been collateral damage from militarized US foreign policy. The 1950–53 Korean War, which killed 4 million people, led to social and political chaos, separated families, and orphaned and widowed millions, creating conditions where women were without homes and work. This forced women into prostitution, according to Katherine H.S. Moon, an expert on US military prostitution in South Korea and author of the book Sex Among Allies.

Over a million Korean women have worked in “camptowns” that surround US military bases in South Korea. This system of military prostitution was controlled by the South Korean government and supported by the US military in order to strengthen military alliances and prop up the South Korean economy. Yet the women were stigmatized, “destined to invisibility and silence,” according to Moon.

These camptowns not only facilitated the immigration of thousands of Korean “war brides” to the United States, but also transported the system itself. As the US military steadily reduced its troop presence in Asia, camptown establishments, facing social upheaval and economic uncertainty, began sending their madams and sex workers to US domestic military sites through brokered marriages with US servicemen. Many of these exploited Korean women arrived in the US South, a region housing many domestic military bases, which saw the proliferation of military prostitution. By the 1980s, the Korean American sex trade would spread from these Southern military towns to elsewhere in the United States—including the Atlanta metropolitan area, site of Tuesday’s horrific mass shooting.

We see this anti-Asian violence now manifesting in ramped up US aggression toward China and the ubiquitous US military presence throughout the Asia-Pacific region. According to American University professor David Vine, there are approximately 300 US bases in the Asia-Pacific region circling China, which along with “aggressive naval and air patrols and military exercises, increases threats to Chinese security and encourages the Chinese government to respond by boosting its own military spending and activity.” The military buildup is raising regional military tensions, and increasing the risk of a deadly military clash or what should be an unthinkable war between two nuclear-armed powers.

If we are to successfully stop anti-Asian hatred here in the United States, we must recognize how US foreign policy perpetuates it and end US militarism and wars throughout the Asia-Pacific region. The Biden administration could start by formally ending the Korean War, which cost nearly $400 billion (in 2019 dollars) to fight, and continues to be a source of justification for military-centered policies by the United States, South Korea, Japan, and others in the region.

As we address violence against Asians and women and dismantle white supremacy here at home, we must also fundamentally reorient US foreign policy in the Asia-Pacific region away from domination and control and toward true human security for all.