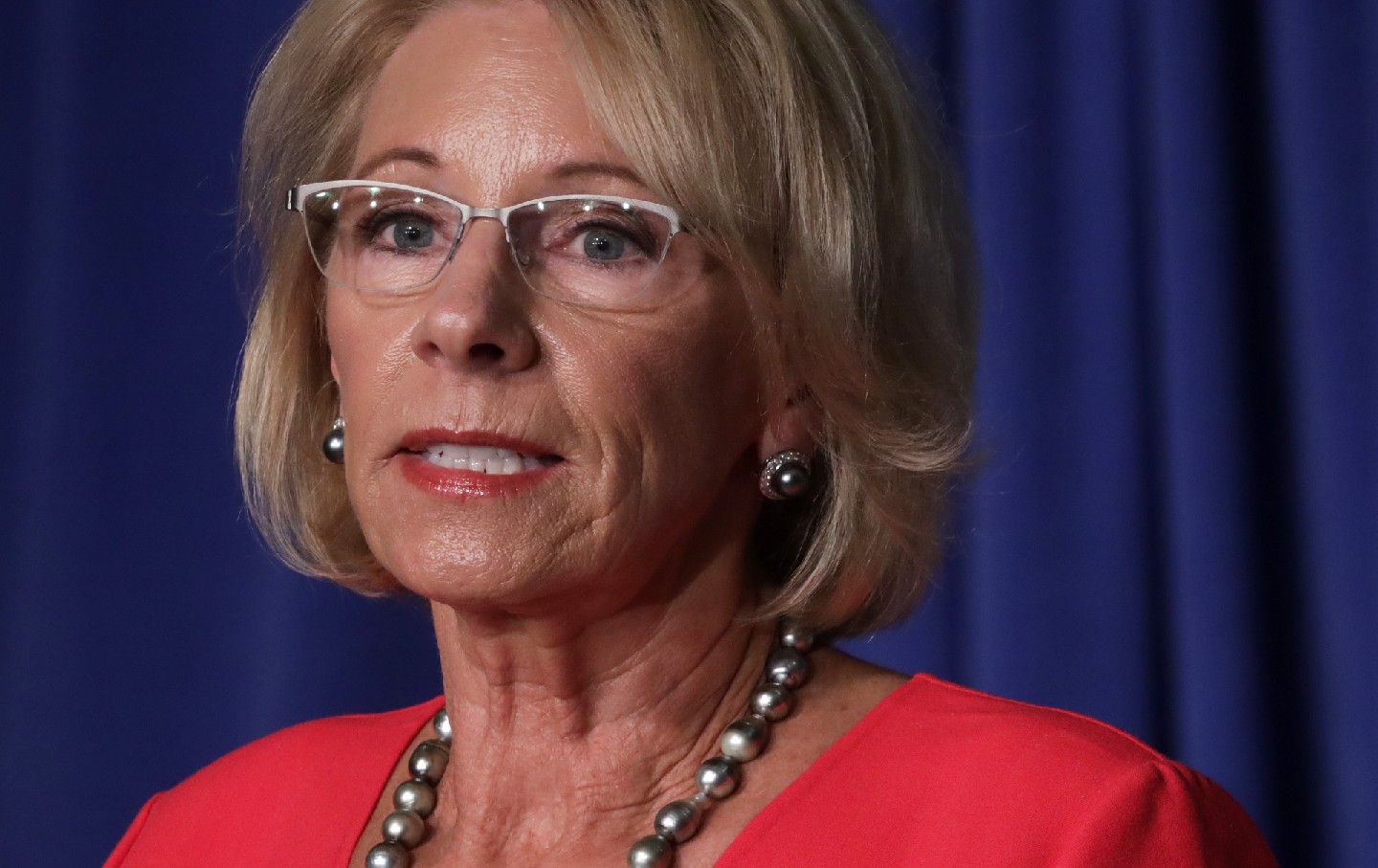 US Secretary of Education Betsy DeVos in July of 2020 in Washington, DC. (Alex Wong / Getty)

So much for “live free or die.” In a jarring attack on trans student-athletes, the Department of Education’s Betsy DeVos has forced Franklin Pierce University in New Hampshire to rescind its trans-inclusive policies for its athletic programs. DeVos claims that Franklin Pierce’s guidelines violate Title IX, which is meant to protect women in spaces that receive public funding. In the eyes of the Trump administration, trans women are not regarded as women at all.

The Title IX complaint against Franklin Pierce was made by the organization Concerned Women for America, described by Karleigh Webb in Outsports as “a Washington, D.C.-based Christian, anti-feminist, anti-LGBTQ organization.” It filed this complaint in 2019, after Franklin Pierce runner Cecé Telfer, a trans woman, won the NCAA Division II 400-meter hurdles. Telfer became the first transgender student athlete to break the tape at an individual track and field NCAA championship, which is bizarre if trans women are actually running roughshod over women’s sports as CWA argues. The DeVos threat, of course, is that for a violation of Title IX, federal funds could be withheld. It’s using Title IX—and sports—as a cudgel to attack schools with trans-inclusive policies.

Like Dave’s writing? You’ll love him in conversation. Check out Dave Zirin and an extraordinary group of speakers at the first-ever virtual Nation festival, Nov. 18-21

Franklin Pierce University, in defense of caving to DeVos and the Concerned Women of America, released the following statement:

Franklin Pierce University is committed to an inclusive environment for all of its students. We regret that we were required to rescind the Transgender Participation and Inclusion Policy we adopted and put forward based on the NCAA’s model, but have made this move to comply with a resolution agreement with the U.S. Department of Education’s Office for Civil Rights. While we disagree with the position that the federal administration has taken with respect to trans-inclusive athletics participation, the Office for Civil Rights confirmed in its resolution letter (sent to us on October 16, 2020) that the provision within our policy were [sic] consistent with the NCAA’s Policy of Transgender Student-Athlete Participation, which was promulgated in 2011. We will continue to work with the Northeast-10 Conference and the NCAA on this important issue.

The CWA (and, honestly, the Communication Workers of America should sue them for stealing their initials) has worked in conjunction with DeVos to go after other states like Connecticut that have trans-inclusive athletic policies. It’s a methodical approach aimed at forcing trans people not only off the field of play but also into a silenced, marginalized space.

I reached out to ACLU attorney Chase Strangio (who was recently profiled by The New Yorker for winning legal victories for trans people) for comment:

“The latest set of actions from Betsey DeVos’s Department of Education (ED) are truly chilling. The agency is now threatening to withhold federal funding from institutions and districts that protect trans students from discrimination. Through its Office for Civil Rights, ED has partnered with groups like Concerned Women for America and Alliance Defending Freedom to bar protections for trans student athletes. These groups have a long history of discrimination against LGBTQ people and against all progressive action for women generally. What we are seeing now is the reemergence of a long-abandoned practice with both colonial and eugenic impulses to regulate the bodies of women athletes and ultimately, cede to the state the ability to control and define who is a woman. The consequences of these actions will hurt all women, will threaten all women in sport, and will serve to entrench regressive notions of gender that will extend beyond sport into other areas of law. The idea that women who are trans are a threat to women’s sports when women’s sports remain underfunded, women athletes underpaid, women coaches underdeveloped, is a reminder that this is about hurting some women and not supporting all women. We are now witnessing a federal government that is not only unwilling to protect trans people but now actively barring state and local entities from protecting us as well.”

This focus on trans athletes has been so effective for DeVos and antediluvian groups like CWA because it allows them to conjure a nightmare of cisgender men pretending to be trans in order to enter women’s sports events and dominate. They sow this paranoid falsehood and win over people who would otherwise be allies with the trans movement, but instead are directed to see trans women as some kind of a threat to their own daughters’ dreams of athletic glory.

Yet this is a fiction. In fact, in the worlds of women’s rugby and power lifting, cisgender women have fought for the inclusion of their trans teammates, often in the face of exclusionary policies. This conception also feeds into some grotesque notions that biology is somehow destiny when we are talking about success in athletics. We need to stand unapologetically for trans liberation in all aspects of human existence, without exception. That includes the world of sports. But the DeVoses of the world understand that if people felt free to play, they just might think that a greater freedom is just around the corner.