A union worker holds a strike sign as he pickets with nurses outside of the Kaiser Permanente San Francisco Medical Center on November 10, 2021, in San Francisco. Kaiser Permanente nurses and workers are staging informational pickets across California as thousands of Kaiser workers are preparing to strike for higher wages and safer working conditions. (Justin Sullivan / Getty Images)

On March 8, 2021, 700 nurses launched what would become the nation’s longest strike of the year. They were demanding better staffing and working conditions at Saint Vincent Hospital in Worcester, Mass., and they picketed for nearly 10 months as the hospital, owned and operated by Tenet Healthcare, hired permanent replacements. The two sides reached an agreement on most issues in August, but the work stoppage continued for four more months until the Massachusetts Nurses Association members could ensure that striking workers could keep their jobs.

Despite the significance of a protracted strike by 700 nurses, the Bureau of Labor Statistics (BLS), historically the most important source of strike data, does not track this activity. Ever since the Reagan administration cut BLS funding in 1982, the bureau only documents work stoppages involving 1,000 or more workers that last at least one shift. Considering that nearly 60 percent of private companies have fewer than 1,000 employees, the exclusion of smaller strikes prevents activists, policy-makers, and scholars from understanding the true scope of labor unrest.

Looking back to the labor unrest of the 1930s and ’40s, many activists have suggested that a massive wave of strikes could force employers to give workers a greater share of their profits. A highly mobilized labor movement was a political force in the early-to-mid 20th century, and they argue that a similar dynamic could bring about a more equitable distribution of wealth today.

Undoubtedly, the United States needs such a movement. Inequality has grown to spectacular levels. By the end of 2021, wealth concentration had reached its highest point since World War II. But without a clear sense of how common strikes are, it is difficult to determine how powerful the labor movement is in pushing forward a progressive agenda. And while unionization rates are an important measure of labor’s collective strength, strike rates are essential to understanding emerging political and economic power. Withholding labor provides workers with their greatest source of collective power, and the economic disruptions caused by strikes have historically forced employers to bargain with labor organizations. Similarly, the threat of ungovernability has often pushed governments to adopt pro-labor reforms.

To overcome the limitations in existing data sources, we started the ILR Labor Action Tracker, which documents strikes and labor protests of all sizes, regardless of unionization status. Our project shows exactly how much the BLS undercounts the extent of labor action. We documented 265 work stoppages involving approximately 140,000 workers in 2021, compared to the BLS count of 16 stoppages involving 80,700 workers. Our findings also confirmed that October of last year, the so-called Striketober, had more strikes and workers on strike than in any prior month that year. But, despite the relative uptick documented in late 2021 and extensive media coverage of labor activism, strike rates remain far lower than in historical eras.

Based on our research, we believe that labor unrest is not yet at a level where it could precipitate substantive institutionalized gains, as workers are still overwhelmingly choosing individualized “exit” options. Nonetheless, there are positive developments due to the numbers of workers recently on strike, successful new organizing campaigns, and broader public support for the labor movement. 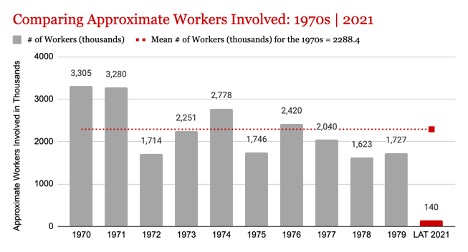 The number of work stoppages in 2021 was almost 20 times lower than in the 1970s—the last decade in which the BLS documented work stoppages of all sizes (six workers or more). Several reasons help explain the decline in strikes. De-unionization, expanded capital mobility and outsourcing, the shift from a manufacturing to a service economy, and increasingly resistant employers willing to permanently replace striking workers have combined to make striking more difficult and costly. Efforts at passing pro-labor national legal reform—including facilitating the unionization process and restricting the ability of employers to replace striking workers—have consistently failed in recent decades.

Considering these political and economic realities, most workers wishing to improve their conditions simply quit. Compared to the approximately 140,000 workers on strike throughout the entire year, more than 4.5 million workers resigned from their jobs in November 2021 alone. Quitting is a rational response to a situation that does not offer collective routes to improving one’s livelihood. But individualized actions in the labor market will not stem the tide of growing inequality.

Even with large public support and occasional high-profile victories, the labor movement confronts a difficult situation. The obstacles to strikes and unionization remain prominent, yet the level of insurgency needed to catalyze a political response to remedy those very obstacles has not yet developed. Signs of growing unrest and unionization breakthroughs—like the educator strikes in 2018 and ongoing Amazon and Starbucks organizing—show the potential for a revitalized labor movement. But labor is not yet economically disruptive enough to force employers to accept deep reforms voluntarily or widespread enough to constitute a significant political force at the national level. 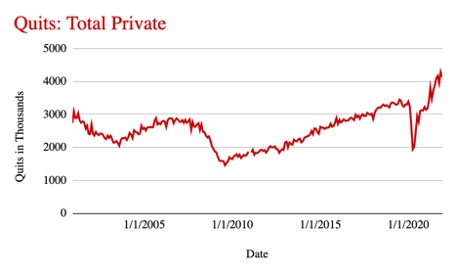 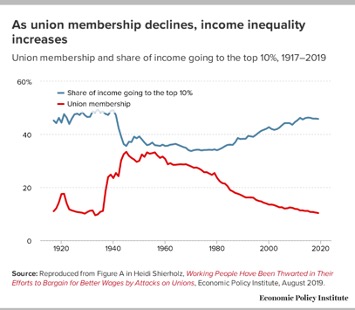 Despite this pessimistic outlook, our data demonstrates that workers are beginning to collectively resist even when institutions are not yet in place. Nonunion workers organized one-third of all strikes documented in 2021, suggesting that, even absent formal organization, more people are recognizing that building power and winning economic gains requires collective action. These strikes were also accompanied by a hybrid form of resistance that transformed quitting into a collective act. Examples of mass resignations, in which workers collectively quit jobs because of issues like low pay and understaffing, have occurred at fast-food restaurants and retail stores across the country.

Some of the more prominent strikes since 2018 have emerged outside of collective bargaining institutions. In defiance of union leadership, hundreds of thousands of educators organized the 2018 Red for Ed strikes in states, such as North Carolina and Oklahoma, generally considered hostile to the labor movement. Workers have also rediscovered the strike as a tool to advance claims about injustice beyond immediate economic issues. In the summer of 2020, police violence against Black people triggered labor unrest, most notably when NBA players staged a wildcat strike to protest the shooting of Jacob Blake.

The strike has reentered public discourse as a means for advancing economic and social demands. The question remains whether the collective power of workers will expand and cause enough disruption such that economic and political elites will be willing to strike a bargain.