An entrance to the Capitol Hill Organized Protest in Seattle, Washington on June 14, 2020. (Noah Riffe / Anadolu Agency via Getty Images)

eattle—On the evening of June 8, the street barricades in Seattle that had encircled tear-gas-laced standoffs for over a week became the boundaries of a new social order. The city’s police department had just evacuated their east precinct on Capitol Hill, the former epicenter of protest frictions and the most densely populated residential neighborhood in Washington state. With the cops suddenly absent, activists protesting the police killing of George Floyd seized a six-block area around the police station. Before long, they had erected signs that read, “You are now entering a free Capitol Hill” and spray-painted the precinct house entrance, relabeling it: “The Seattle People’s Department.”

What has emerged inside those borders is an alternative society known as the Capitol Hill Autonomous Zone (CHAZ)—now the Capitol Hill Organized/Occupied Protest (CHOP), an anti-capitalist vision of community sovereignty without police. Day by day, new projects spring up around the premises. On one corner, people of different races gather at a cluster of couches known as the “Decolonization Conversation Cafe.” Across the street, they can access free food, water, clothing, books, and medicine from volunteer tents lining the sidewalks.

To some, the space represents a small utopia. For others, it’s an anarchic violation of law and order. Despite the recent hype that has drawn tourists to check out the scene and has inspired the formation of similar encampments in other parts of the country, the CHOP is not an unprecedented or isolated event. It shares a history of resistance with Indigenous-led movements across the Americas.

Seattle’s occupied zone replicates a long legacy of resistance organizing rooted in Latin America. The Zapatista National Liberation Army (EZLN) of southern Mexico began creating their own self-determined territories in the 1980s, after a century and a half of structural violence from the Mexican state. In 1994, 3,000 Zapatista members wearing black ski masks or red bandanas stormed public arenas, government buildings, and police stations in the state of Chiapas, in southern Mexico. The historic siege was sparked by the government’s decision to sign the North American Free Trade Agreement with the United States and Canada, a deal that would further exploit rural and Maya communities. (Chiapas remains the poorest state in Mexico, and despite its enormous wealth of natural resources, 70 percent of its Indigenous population suffers extreme malnutrition.)

The Zapatistas understood that NAFTA would bring a mass influx of cheap corn imported from the United States and annihilate local farm economies and ecosystems; at the time, then-EZLN leader Subcomandante Marcos described it as a death sentence for Indigenous people. Similar to Black Lives Matter leaders who are calling for police abolition, the Zapatistas believed the answer to neoliberal trade deals was to reject the colonial and capitalist model that had marginalized their communities for generations. The only solution was to build a new vision of society from the ground up. 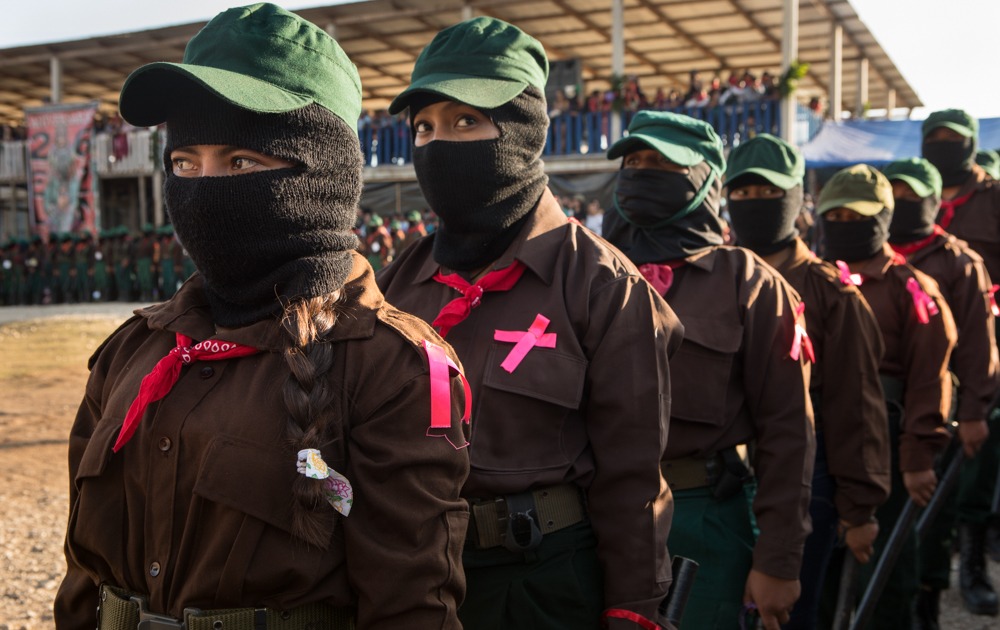 Zapatista women attend an event marking the anniversary of the resistance movement in Chiapas, Mexico, on December 31, 2019. (Hanna Wallis)

Throughout Chiapas, many Zapatista members now live and work in caracoles, autonomous and guarded areas where state and corporate presences are not allowed. They created their own self-governance structure, culturally specific education system, and infrastructure to achieve stronger food sovereignty. The Zapatistas changed global consciousness by showing the rest of the world that the people could succeed in building an alternative society.

In Seattle, the occupation on Capitol Hill is also proving that possibility. Instead of employing a punitive system that criminalizes people experiencing homelessness or mental illness, the CHOP community regulates itself with collective safety and de-escalation strategies. A group that calls itself the Seattle Bike Brigade patrols streets bordering the area beside volunteers with walkie-talkies. Whenever a suspicious or disruptive person is identified—a white supremacist on one occasion, a suspected informant caught photographing people’s faces on another—people swarm the culprit to peacefully escort them from the premises. After two chaotic gunfire episodes, CHOP organizers drafted guidelines to limit late-night activity and substance use. Their efforts keep evolving as they work to translate the vision of a just and free society into practice. 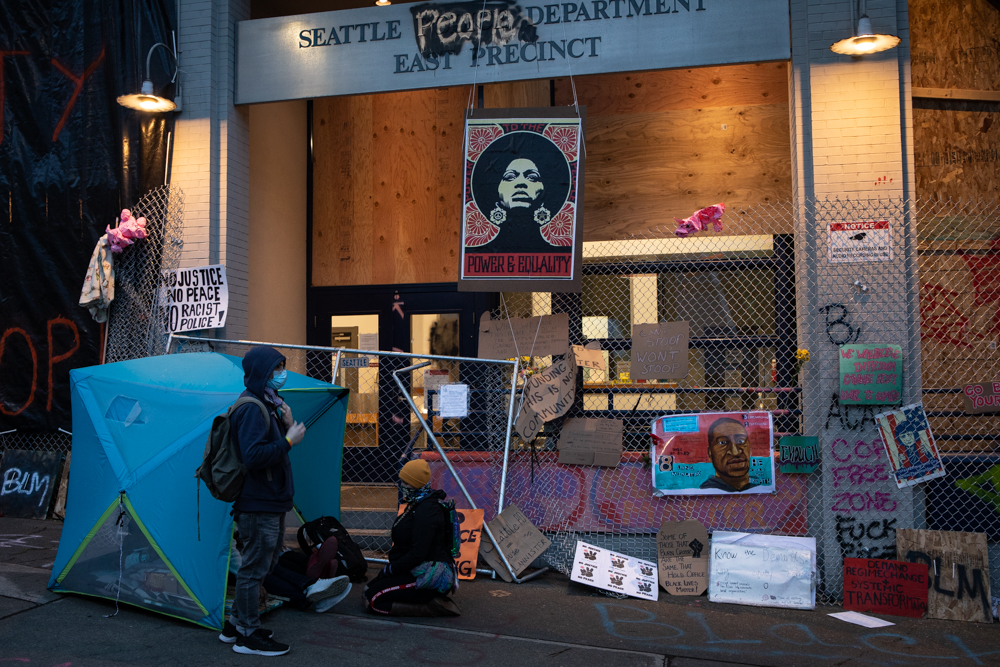 Yet the CHOP differs significantly from the Zapatistas and similar movements because protesters are collaborating with city authorities and have no intention to make themselves fully sovereign. The space was formed not by a takeover but mostly because the police had evacuated. Organizers changed the name from the Capitol Hill “Autonomous Zone” to “Organized Protest” in part to deflect from the conservative media’s fear-mongering claims that the community intended to secede. As one activist, who requested anonymity, explained, “We are not doing this to separate ourselves from America. It’s because we are American that we want to make this space where we can come together, to be joyous, to have justice and equality.”

Every day at 3 pm, a people’s council meets outside the precinct house to strategize about how the community can accomplish long-term policy change outside of CHOP itself. There is no single person or group ostensibly leading the CHOP. Instead, the project strives for bottom-up organizing, echoing the Zapatista governance principle of “mandar obedeciendo”—to lead by obeying. Inside the CHOP, community members are prioritizing the voices of black, Indigenous, and people of color (BIPOC) speakers and striving for intersectionality. On June 14, they held a cultural day in which Pacific Northwest Native people from numerous tribes sang songs and drummed around a sacred fire encircled in cedar branches in support of black lives. “We don’t care about oppression Olympics,” an Indigenous woman reminded the crowd. “It’s about realizing that our struggles are parallel to our black relatives’ struggles.”

Protesters emphasized that the same militarized police forces that kill BIPOC people in the United States also defend the fossil fuel industry and other extractive projects that destroy Indigenous lands around the world. (Both groups suffer disproportionate violence at the hands of US police.) Environmental defenders, many of them Indigenous, are murdered at alarming rates, particularly in Latin America. The impetus and goal of many resistance movements in the region is to protect and recover ancestral territory from the powers that usurped it—from Colombia’s Regional Indigenous Council of Cauca (CRIC) to the Landless Workers Movement (MST) of Brazil. For most of them, the first step to reversing exploitation, erasure, and genocide is securing land rights to have the physical space where they can manage their own resources and governance. 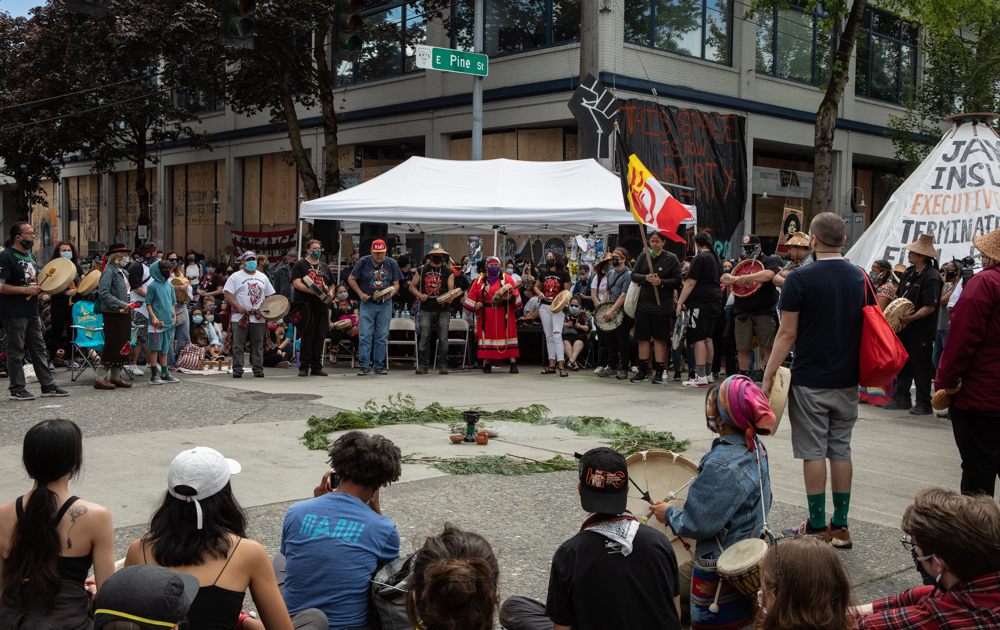 Drummers from numerous tribal nations hold a ceremony at the CHOP as part of an effort to unite black and Native struggles. (Hanna Wallis)

The CHOP, too, represents a reclamation effort on several levels: Police no longer rule a central hub of the city; Indigenous leaders are teaching the community to honor the Duwamish and Suquamish land they stand on (Seattle is named for Chief Sealth of the same tribes); and, surrounded by luxury townhouses that have gone up in the past decade, the protest area is also a symbol of resistance in the face of gentrification, where, unlike much of the city, new Amazon wealth hasn’t pushed people of color and low-income residents out. Along with their three core demands: defunding the police, freeing protesters, and investing in BIPOC communities, CHOP activists hope to turn the east precinct building into a community center.

At a press conference on Monday, Mayor Jenny Durkan and Seattle Police Department (SPD) chief Carmen Best both said the City would be transitioning to end the experiment on Capitol Hill, citing the recent shooting incidents. They both emphasized that Seattle would commit to reinventing community safety by listening to BIPOC activists’ guidance. Regardless of when and how the occupation disbands, the organizing coming from CHOP has already succeeded. Seattle City Council member Kshama Sawant announced on Twitter on June 15 that the council had unanimously ruled in favor of legislation banning the SPD from buying tear gas and other protest-control weapons. Three days later, the Martin Luther King County Labor Council voted to expel the SPD union.

Prominent activist Nikkita Oliver reminded demonstrators on June 14 that their efforts at CHOP represented a symbolic victory, but only a starting point. She shared the recommendation that Seattle’s former Black Panther leader Aaron Dixon had told her: “We should be spending 25 percent of our time dismantling the system and 75 percent building the world we want to see.” As a lived expression of imagining radical change, CHOP has proven to Seattle the famous Zapatista axiom, “otro mundo es posible”—“another world is possible.”