A participant holding a “Defund the Police” sign at a protest in Brooklyn, N.Y., demanding justice for all victims of police brutality. (Photo by Erik McGregor / LightRocket via Getty Images) 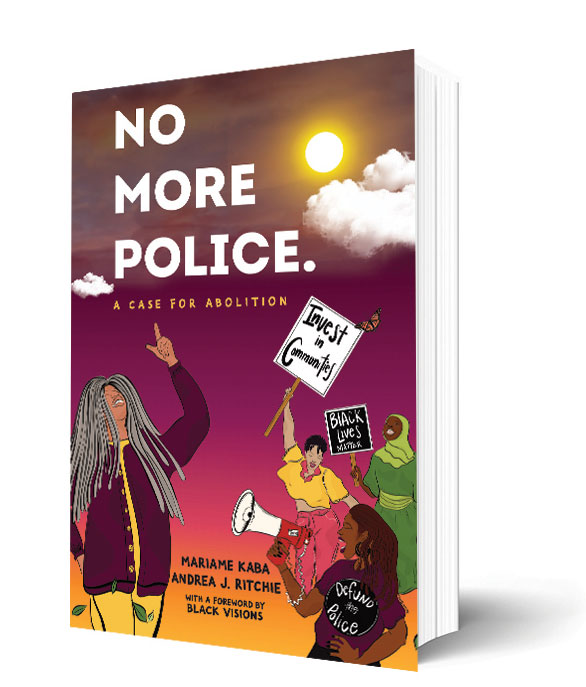 This article is an excerpt from Andrea Ritchie and Mariame Kaba’s new book, No More Police: A Case for Abolition (The New Press).

Following the November 2020 elections, Democratic leadership called former president Barack Obama out from retirement to quell growing public support for shrinking police department budgets and investing in community needs. In an interview on Snapchat’s “Good Luck America,” Obama admonished protesters and activists: “If you believe, as I do, that we should be able to reform the criminal justice system so that it’s not biased and treats everybody fairly, I guess you can use a snappy slogan, like ‘defund the police.’ But you know, you lost a big audience the minute you say it, which makes it a lot less likely that you’re actually going to get the changes you want done.”

But the police and criminal punishment system cannot be reformed. Like Fannie Lou Hamer, who said, “I am sick of symbolic things—we are fighting for our lives,” we are sick of symbolic changes that leave policing’s core functions and daily impacts untouched.

Calls for police reform misapprehend the central purpose of police, which inevitably dooms them to failure. As we argue throughout our new book No More Police: A Case for Abolition, police exist to enforce existing relations of power and property. Period. They may claim to preserve public safety and protect the vulnerable, but police consistently perpetrate violence while failing to create safety for the vast majority of the population, no matter how much money we throw at them. Their actions reflect their core purposes: to preserve racial capitalism, and to manage and disappear its fallout.

As journalists and organizers Maya Schenwar and Victoria Law put it: “Reform is not the building of something new. It is the re-forming of the system in its own image, using the same raw materials: white supremacy, a history of oppression, and a toolkit whose main contents are confinement, isolation, surveillance, and punishment.” We want something new, which requires us to abolish institutions and practices of policing, not simply reshape them.

A commitment to creating safety anew doesn’t mean we don’t fight for incremental changes, but it does challenge us to make transformational demands that erode the power, resources, and reach of police: defund, decriminalize, and divest from policing. It also challenges us to increase our power to build the world we want through demands for investment in meeting community needs and building strategies that will bring us closer to real safety for all.

As talk of police abolition entered the mainstream in 2020, oppositional calls for reforms grew louder. National and local politicians and policy advocates argued that the way forward was to keep trying to make policing “better,” not dispose of it entirely. “Don’t defund police, re-fund police,” went the reformist refrain—as though the more than $100 billion poured into cop coffers each year somehow deprives police departments of enough money, tools, training, and resources to do their jobs well.

The chorus calling for police reform in the midst and wake of the 2020 Uprisings is made up of a range of voices, including older white liberals, mainline civil rights groups, members of the Black middle class, and newcomers such as Campaign Zero—a group of young Black activists who came together to create social media, data, and policy tools in the context of the Ferguson Uprising. Even Senator Bernie Sanders, who has argued for wholesale reorganization of the US economic system, sidestepped calls to defund police, arguing instead for the “transformation of police departments” into “well-trained, well-educated, and well-paid professionals.” In Minneapolis, where Derek Chauvin killed George Floyd in May 2020, longtime police reformers responded to calls to dismantle the police department and create a new department of public safety by insisting that better rules, stronger oversight, and more accountability for the existing police department are the answer to continuing police violence.

Nationally, reformers argued that police departments could be transformed with data, science, and “21st Century” policy recommendations, like those made by the Obama administration’s Presidential Task Force on police violence in the wake of the police killing of Mike Brown in 2014. Advocates for police reform coalesced around the federal George Floyd Justice in Policing Act (JPA), as well as state and local legislation that mirrors its provisions. The proposed legislation recycled long-standing proposals: end racial and religious profiling; adopt body and dashboard cameras; limit local departments’ access to military-grade weapons; tie police funding to adoption of bans on choke holds and no-knock warrants; develop new use of force policies; embrace community policing programs and training; and create more “oversight.” The JPA would also have established a National Police Misconduct registry and reduced barriers to federal prosecutions and civil lawsuits.

While the federal legislation was being hotly debated in Congress and critiqued by organizers, Campaign Zero introduced a set of eight reforms that essentially functioned as a wedge against defund demands. They claimed, based on contested data, that their #8CantWait reforms would reduce police killings by 72 percent. The #8CantWait proposals included rules prohibiting cops from shooting into moving vehicles, requiring them to announce their intention to kill before shooting, and teaching them a “use of force” continuum—a gradual escalation of force proportional to (perceived) threat, something that has already been a part of police training for decades. As with the JPA, #8Can’tWait allowed politicians and celebrities an “out”—they could look like they were backing well-known young Black leaders calling for change without threatening the existence or fundamental purpose of policing.

But nothing in the legislation named for him would have prevented George Floyd’s murder, nor changed the conditions that brought him into contact with the cops who killed him. Millions watched Derek Chauvin, a cop trained in “implicit bias,” de-escalation, and the dangers of putting pressure on a person’s neck, use a “positional restraint”—which is different from a “choke hold,” and therefore permissible under “choke hold” bans—to snuff out the life of a Black man over a $20 bill. The de-escalation techniques he was trained on were implemented by a department that had already faced extensive reform and claimed to have adopted 90 percent of the policies promoted by Obama’s Task Force on 21st Century Policing, as well as at least half of the #8CantWait policies. Many other departments across the country had already adopted the proposed reforms, while continuing to kill, maim, and harm Black people with impunity. For instance, the cop who killed Rayshard Brooks two weeks after Floyd’s murder had “undergone 2,000 hours of training, including sessions on de-escalation tactics, cultural-awareness training, and instruction on use of deadly force. None of this preparation stopped him.”

Neither the JPA’s prohibition on “no-knock” warrants nor #8CantWait policies would have stopped Breonna Taylor’s killing: the cops claimed they knocked before invading her home, and Louisville already has an “announce before killing” rule. So did Cleveland, yet police killed 12-year-old Tamir Rice within seconds of arriving at a playground. The same is true of North Carolina, where state troopers killed Daniel Harris, a deaf person who didn’t hear the sirens of the cop car signaling him to pull over. In Chicago, adoption of seven of the #8CantWait policies has not stopped Chicago police from killing Black people at 27.4 times the rate of white people. To paraphrase Black feminist poet and scholar Rosamond King, the JPA and #8CantWait recommendations boiled down to: find new ways to kill Black people, make a record of it, and make sure everyone knows. The government will pay you to do it.

George Floyd’s death pushed many people to look for answers beyond reform, opening unprecedented space for abolitionist critique. Soon after #8CantWait was announced, a group of abolitionists from across the country responded by launching the #8toAbolition counter-campaign. Their demands included redistributing police budgets to meet community needs, decriminalizing poverty and survival, disarming police, removing cops from schools, and ensuring safe housing for all. Their goal was not reform but building “a society without police or prisons, where communities are equipped to provide for their safety and well- being.” Abolitionist critiques ultimately eroded support for #8CantWait.

The 2020 Uprisings brought many to the realization that it is time to stop trying to reinvent the wheel. All of us have spent too much time, energy, and resources in pursuit of fruitless “fixes” to reduce the violence and harm of policing. It’s time to confront what policing is at its core and move beyond it rather than continuing to try to “re-form” it.

Letting go of our relentless and misguided fixation on reform opens up dramatic new possibilities. It also stops us from banging our head on the same walls, coming up against the same result, watching the next video in despair, throwing up our hands in hopelessness. It enables us to build safer futures while reducing the harms of the present, instead of draining our energies trying to squeeze what police are—and always have been—into a different shape. While reform requires us to affirm the current system and surrender our imagination to the carceral state, abolition encourages us to dream new worlds and challenges us to use our best thinking to build a better society.