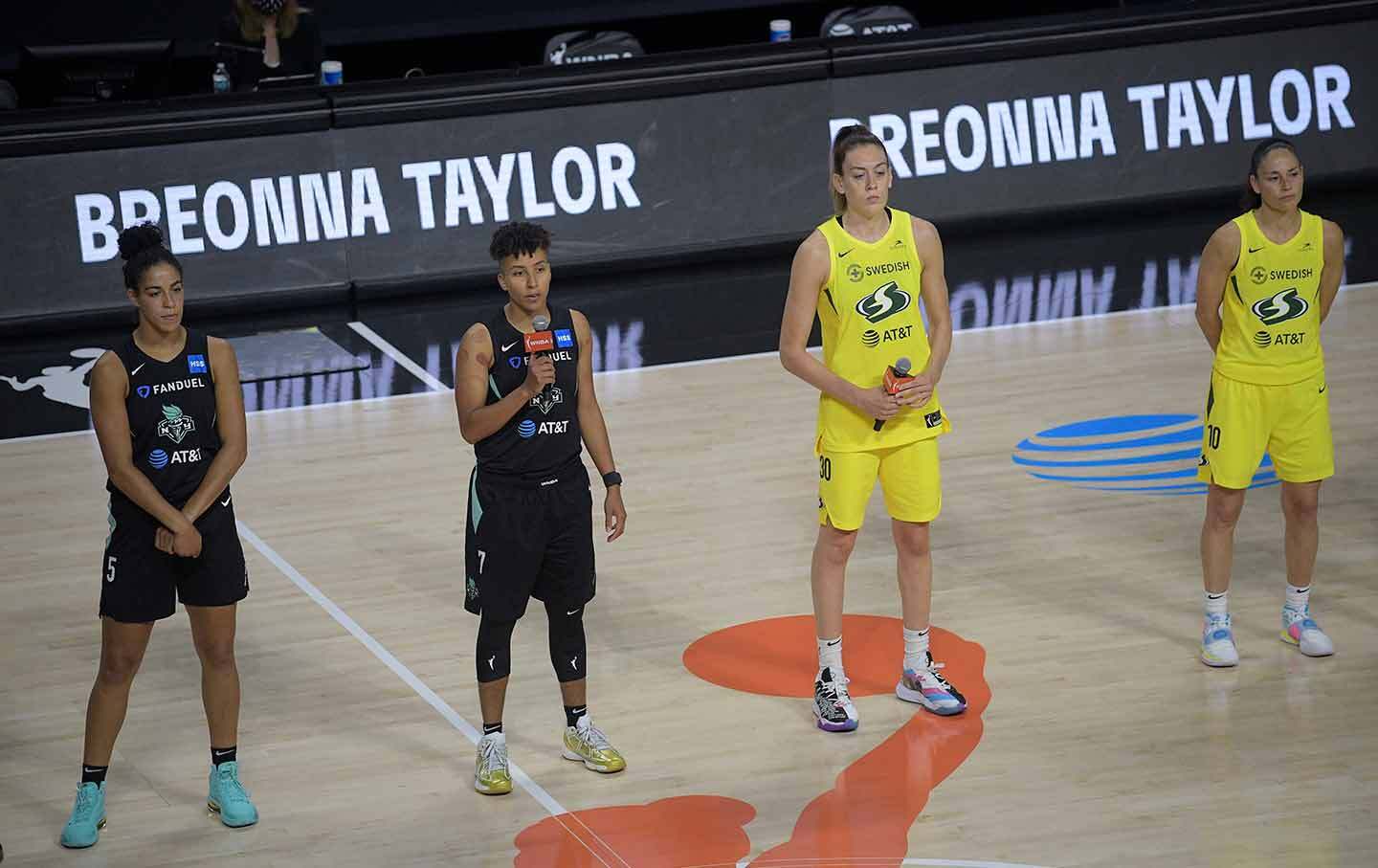 As the sports world limps toward a reopening, complete with bubbles, fake crowds, and Covid nursing stations with the kind of round-the-clock testing the rest of us couldn’t hope to access, we are also seeing more athlete protest than ever before. Part of the spectacle now is seeing who takes a knee before or during the anthem, wears a Nike/NBA-approved racial justice slogan on their uniforms, or raises a fist as the anthem plays. These gestures, which would have been absolutely electric a year ago, are now commonplace and acceptable. It’s a testament to the kind of “woke capitalism” that the sports world seems desperate to embrace.

On the one hand, this is a recognition among the forces of capital that the younger generation they want to attract is more diverse, more left-wing, and less tolerant of intolerance. The word has gone out: Racist brands, racist statues, and even racist franchise owners are in peril. Yet, on the other hand, we need to see this for what it is: a commodification of dissent. It’s the monetizing of the bravery of those still in the streets getting teargassed in protest of both racist policing and Trump’s secret federal army of extra-legal goons. There’s no money in being pepper-sprayed, but there is a great deal to be made by cashing in on the valor of those who are.

In this atmosphere of cooptation, leave it to the WNBA to raise the bar. As usual, its players are doing what the rest of the sports world, for all their panicked gesturing, won’t: make people—particularly white people—uncomfortable. As basketball legend Bill Russell said 50 years ago, “We have got to make the white population uncomfortable, because that is the only way to get their attention.” WNBA athletes almost alone right now are willing to live by that credo. Before their opening-night contest between the Seattle Storm and New York Liberty, Layshia Clarendon and Breanna Stewart addressed those watching.

Clarendon said, “We are dedicating this season to Breonna Taylor—an outstanding EMT who was murdered over 130 days ago in her home.” But that wasn’t all. Clarendon also announced that the entire season would be dedicated to Black women who had been killed because of racist, misogynistic violence. She said that it would be dedicated to the “Say Her Name Campaign: a campaign committed to saying the names and fighting for justice for Black women…. so often forgotten in this fight for justice…. We will say her name: Sandra Bland, Atatiana Jefferson, Dominique ‘Rem’mie’ Fells and Breonna Taylor. We will be a voice for the voiceless.”

Then, after 26 seconds of silence for Breonna Taylor (Taylor was 26 when she was killed), the teams walked off the court just prior to the anthem. (Most news reports have said that the walk-off was during the anthem. This is false.)

As Clarendon told ESPN, “Kneeling doesn’t even feel like enough to protest. I don’t want to hear the anthem, I don’t want to stand out there. I don’t want to be anywhere near it, because it’s ridiculous that justice and freedom are just not offered to everybody equally.”

Baseball Says No to Jim Crow 2.0

Will MLB Celebrate Jackie Robinson While Holding Its All-Star Game In Georgia?

This is, naturally, garnering outrage. Republican Trumpist Senator Kelly Loeffler, a WNBA franchise owner, has been rage-tweeting at the league like a warped version of Donald Sterling, one who doesn’t need to be recorded surreptitiously to let their racist freak flag fly.

Yet, no matter the backlash, these are the sentiments that need to be expressed amid the rush to grab woke capitalism’s golden ring. These are the sentiments that Colin Kaepernick sacrificed his football career to raise. In 2020, taking a knee or raising a fist while wearing corporate-safe slogans, living in a Covid bubble with round-the-clock health care doesn’t do much. (If a player tried wearing a slogan decrying Nike’s use of sweatshop labor, we would see the limits of corporate enlightenment.) But WNBA players like Clarendon are seeking out ways to practice real dissent in a set of bizarre playing circumstances that seem almost fictional, more out of the mind of Kurt Vonnegut than of Adam Silver.

Just as Black women have created, led, and pushed the envelope in the fight for Black lives since the movement’s beginnings, they are reminding us of what radical dissent looks like on the court—and why it is so critical to break the chains of commodification and continue to make onlookers uncomfortable.