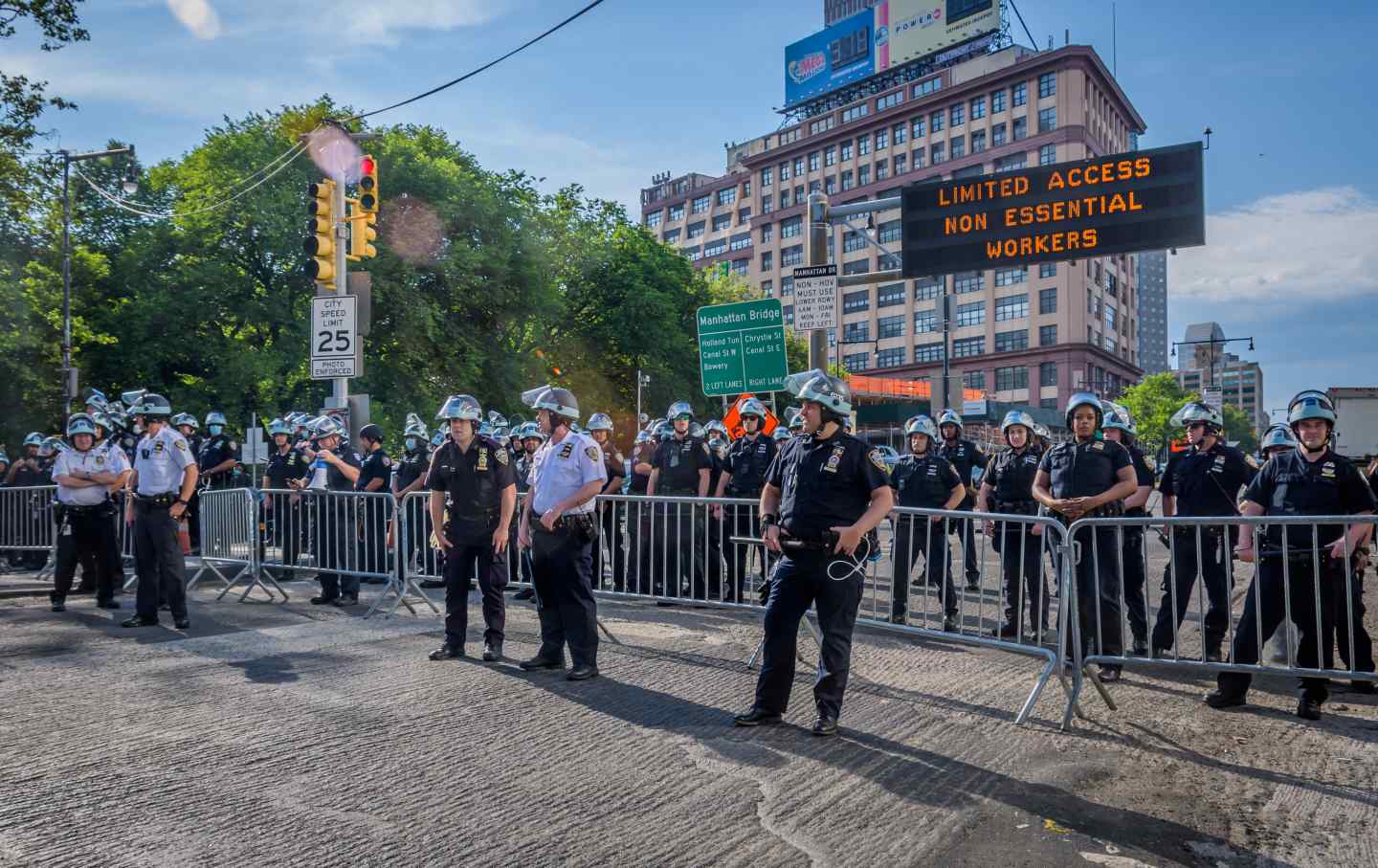 On any given day in recent weeks, it’s been possible to binge-watch a brand-new batch of videos documenting police attacking protesters with every tool in their (literal) arsenals. A New York City cop shoved a woman roughly half his size to the pavement so forcefully, she suffered a seizure and was hospitalized. In Texas a mounted police officer steered his horse into a crowd of demonstrators, nonchalantly trampling a woman in his path. Minneapolis police, from the comfort of their squad cars, conducted the drive-by pepper spraying of peaceful protesters in multiple instances. And cops in Iowa—like ones in Virginia, Texas, Colorado, California, and many other states—fired rounds of tear gas at protesters standing with their hands in the air and chanting, “Hands up, don’t shoot.”1

Again and again, protesters demanding an end to police brutality have been met with brutality by police. The videos of law enforcement being unlawfully violent—including footage of cops in Buffalo pushing a 75-year-old white man to the ground and then falsely reporting that he “tripped and fell”—has proved what black folks and other marginalized communities have been saying for as long as policing has existed in this country: Cops not only lie about the harm they inflict on people; they lie frequently and brazenly, even when there is solid proof to the contrary. (These scenes also raise the question, If police are willing to commit this kind of over-the-top violence when they know they’re being filmed, what horrors must they carry out when they know their acts will go unseen?) Weeks of witnessing rampant law enforcement violence has finally succeeded in mainstreaming the idea of police abolition, something that seemed unthinkable—and which many suggested was laughable—even a couple of months ago.2

And yet, against this backdrop of wanton police abuse, there has been no lack of pearl-clutching about the supposed violence of the protests. These critiques seem to rest on the idea that civilian attacks against big-box retail outlets, luxury boutiques, and other inanimate objects are somehow commensurate with the state-funded violence by armed officers against actual black bodies. (Yes, some small businesses were struck, too, but it’s critical that we not allow those targeting them to derail attention from racialized policing.) Tacit rhetorical equivalences between lost commercial products and lost black lives reveal yet again how American racism and capitalism are inextricably intertwined. But this historic moment of nationwide uprisings also demonstrates how white institutional power decides what does and does not qualify as violence in this country—a standard resulting in a national ethos that defines the destruction of buildings as catastrophic but the literal snuffing out of black life by police as merely maintaining “law and order.”3

It’s true that the footage of police attacking protesters has forced mainstream news writers bemoaning that the protests “turned violent” to clarify that the initiators of said violence were the police. But those reports still ignore that the “violence” being laid at protesters’ feet began when a police officer used his knee to slowly and casually murder George Floyd, a killing that followed police firing eight bullets into Breonna Taylor as she slept and fatally unleashing their firepower on Tony McDade. The violence started when the justice system allowed the police killers of Philando Castile, Tamir Rice, Eric Garner, Michael Brown, and Rekia Boyd to walk free.4

In fact, the violence can be traced back to before this country’s founding. These United States are, quite literally, the spoils of genocidal violence against Indigenous people and the violence of forced black labor. A continuum of violence connects this moment to the first slave patrols. Since then, through overpolicing and mass incarceration, the criminal justice system has destroyed black communities. The carceral state has subjected black folks to what can only be labeled a brutal form of violence rendered invisible by the power given to agents of a white supremacist state.5

A Nation in Revolt

And what about the steady drumbeat of violence issuing from the current president, who explicitly tells cops to rough up people during arrests; who repeats the white supremacist promise that “when the looting starts, the shooting starts”; who flexes historical white racist might by threatening today’s protesters with “the most vicious dogs, and most ominous weapons”? Consider the violence in Bill Clinton’s decision to sign the 1033 Program, which fast-tracked the militarization of the police through the transfer of weapons of war from the US armed forces to the country’s street cops. The Obama administration imposed limits on the program, but in 2017, Trump revoked them with an executive order that jump-started the violent program anew.6

Add to that the daily violence of American systems that are finely calibrated to ensure the rich and powerful remain that way. Which causes more irreparable harm: gutting big-box stores or looting an entire tax system to benefit billionaires who, while we’re on the subject, have gotten precipitously richer as the pandemic has caused unemployment claims to skyrocket? Which is more destructive: burning a building that can be rebuilt or a $2 trillion stimulus package that overwhelmingly gives cash to Americans who already possess more money than they can spend in a lifetime? Violence is a constant embedded in a staggering number of American policies that protect the interests of a tiny but powerful portion of this country. The same folks then create legislation that outlaws a particular brand of violence and disproportionately apply those laws against the most vulnerable. We’ve been living with an astounding amount of violence all this time. The state just calls it something else.7

That’s the trick of American violence: It’s labeled so only when it threatens to upset the violence of America’s white supremacist hierarchical order. For those of us who care to see real progress, that means not being fooled by the term “violence” yet again.8