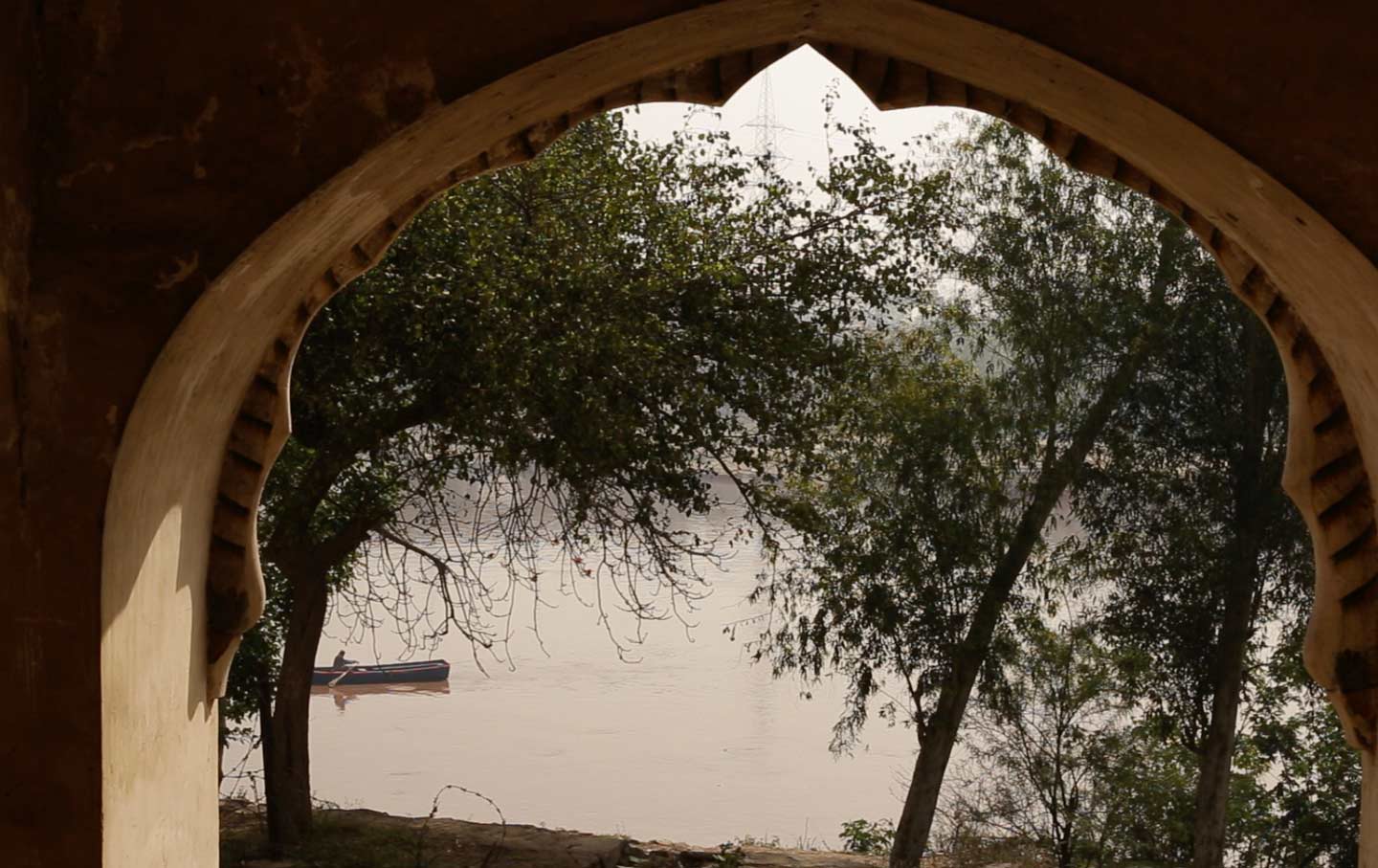 View of the Ravi from inside Kamran’s Baradari. (Hira Nabi)

ahore, akistan—I write to friends in India, and receive from them, messages of fear, of fatigue, narrating incidents of death and helplessness. I write to friends in Palestine, and they tell me that they are not OK, not safe, and they want the world to do something. I receive news from a friend who used to live in Kabul, and he tells me that the school bombings took place in his old neighborhood. I have become an antenna, receiving news of heartbreak and destruction, and the collapse of all sense of order. I transmit what I receive back into the world, not sure who might be listening.

Where there were homes in Deir Yassein, you’ll see dense forests—

That village was razed. There’s no sign of Arabic.

I too, O Amichai, saw the dresses of beautiful women

And everything else, just like you, in Death, Hebrew, and Arabic.

They ask me to tell them what Shahid means—

Listen: it means “The Beloved” in Persian, “witness” in Arabic.

Agha Shahid Ali made an art form of writing ghazals in English. It isn’t lost on his audience that he, an exiled Kashmiri poet, wrote about disappearances and occupation elsewhere—in Palestine. Witnessing becomes a charged act, filled with radical possibility.

Eid was marked in this way. It wasn’t an occasion to celebrate, and I didn’t leave my house to visit with friends, but perhaps it was enough to be grateful to receive food, and be together with my immediate family. The weather was kind, and we took our tea in the garden. To preserve some shade of normalcy, my mother prepared kheer—made with milk, sugar, vermicelli, khoya, cardamom, and slivered almonds. The trick is to keep stirring without stopping while it cooks. The constant movement prevents the milk from curdling; instead, it thickens, letting the sugar bind with it, absorbing and sweetening.

A friend recently remarked about the recurrent loop of history: It is doomed to repetition, yet it erases itself at the same time. Is there a way out?

A Prisoner Videotaped Covid Conditions Last Year. Where Is He Now?

Pondering his question, I went to the oldest known monument of the Mughal Empire in Lahore—Kamran’s Baradari, which was built by Kamran Mirza, son of Babur, the first Mughal emperor, in 1540. Although some accounts state that its cusped arches allude to a later construction date, possibly the 17th century.

What is known for certain is that it was originally built at the edge of the Ravi, but over time, as the river changed course, the land on which this pavilion stands became an island, accessible only by boat. BaraN means 12, and dar means door, hence a pavilion with 12 doors. Its ancient method of ventilation allows air currents to pass freely through those 12 portals, refreshing and cooling the structure during the summer months. Its inner walls have been covered with graffiti. I glimpsed candlewicks on ledges, and blackened arches where the smoke from the burning candles had risen. A funeral of wishes, I thought idly.

I stood on the banks of the Ravi waiting for a boatman to ferry me across. A maximum of two passengers: We had our masks on. Even beneath it, I could smell burnt rubber coming off the water. The river allowed a city to rise up on its banks, and swallow it up.

Most of Pakistan is currently in a semi-lockdown. My brothers went to buy flowers on Mother’s Day, and it was the most bizarre exchange: Formally, the florist had closed his shop, but his assistants crawled beneath the partial shutter bringing out flowers, showing customers images of the inventory on their phones, and illicitly selling bouquets. I had ordered some books to gift my nephews on Eid, but the delivery is delayed. I don’t think they mind; over this past year, long pauses entered our lives and readjusted our expectations. Days and nights pass with nowhere to go. In the midst of this, I try to grow a garden on my windowsill: I watch for signs of overwatering, and underwatering. I am trying to learn plants, to understand them.

What kind of times are these? Adrienne Rich’s poem comes to mind:

I’ve walked there picking mushrooms at the edge of dread, but don’t be fooled

this isn’t a Russian poem, this is not somewhere else but here,

our country moving closer to its own truth and dread,

its own ways of making people disappear.

I won’t tell you where the place is, the dark mesh of the woods

meeting the unmarked strip of light—

I know already who wants to buy it, sell it, make it disappear.

And I won’t tell you where it is, so why do I tell you

anything? Because you still listen, because in times like these

to have you listen at all, it’s necessary

to talk about trees.

It is not just the trees, the land, villages, rivers, and fish that are disappearing at an alarming rate. So are people. Families of missing persons (mainly from Baluchistan, but increasingly journalists and young Pashtun men) continue their vigil outside press clubs in cities across Pakistan, plan long marches to the capital to demand the return of loved ones or their appearance in a court trial. In Karachi, informal settlements at Gujjarnala and Oranginala are being demolished, the people evicted, to make way for new developments. It is a universally established tale of land grabbing and dispossession. The Supreme Court has ordered a stay order until June 1.

And so we wait, and watch. But solidarity is not a passive state of being. It is a ringing call to action. Demolitions in Karachi, demolitions in Sheikh Jarrah, and now Gaza being razed to the ground. I recall Mahmoud Darwish’s writing, poetry turned prose—broadcasting pain from Gaza.

The enemy may defeat Gaza. (The stormy sea might overwhelm a small island.)

They might plant their tanks in the bellies of her women and children, or they might toss her into the sand, into the sea, into blood.

Gaza will not repeat the lies.

Gaza will not say yes to the conquerors.

And she will continue to erupt.

It is not death, and it is not suicide, it is Gaza’s way of announcing she is worthy of life.