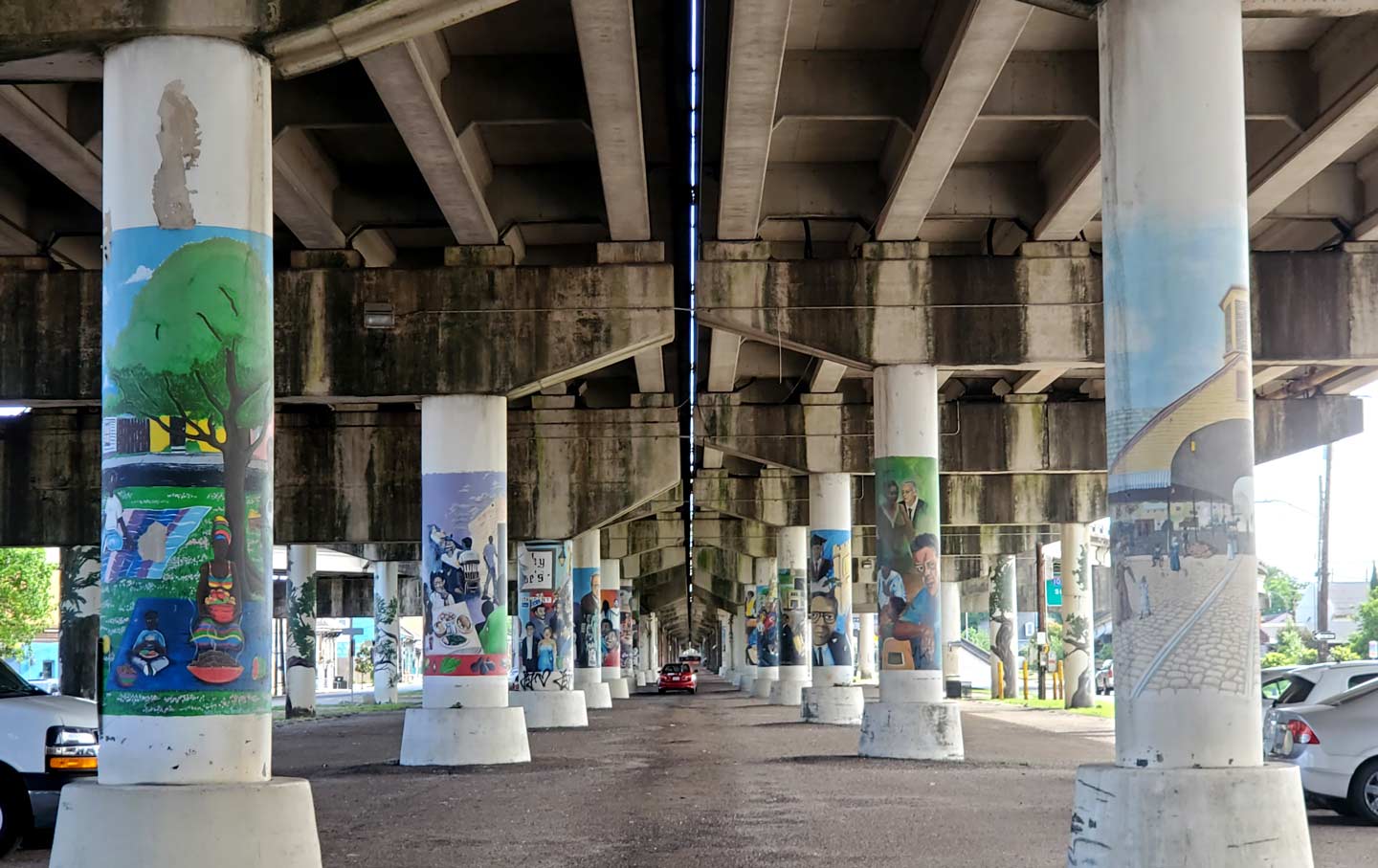 Improvising in the shadow of man-made disaster, Black residents document the history of what was once the commercial and green-space heart of Tremé and use the space for parties, especially during Mardi Gras. (Gina Womack)

ew rleans—I have been working at home since the aftermath of Hurricane Katrina, in 2005. So has the rest of the staff at Families and Friends of Louisiana’s Incarcerated Children (FFLIC), the organization I cofounded in 2001. One man-made disaster was followed by another, as gentrification raked the city. The building FFLIC was renting in a historically Black community was sold, and we were forced to do what has become commonplace everywhere since Covid-19 was allowed to run wild. We telecommuted, since much of our work involved outreach and out-of-office meetings. To maintain connection to the community, we rented a small office in a neighborhood building with coworking space, so staff and families could meet in its conference room. At first, working this way was emotionally and logistically difficult: not to see everyone’s face, to catch up on one another’s life, or pop in for a quick question or support; not to have the physical space that, for many youth and families, had become not just a place to address an immediate need but a home away from home. The chatter, laughter, and freedom of our own space were lost, transformed suddenly, just as life had been after the flood, when the streets went silent because people were displaced, some never to return. As native New Orleanians, we are constantly forced to be resilient; true to our saying Laissez les bons temps rouler (“Let the good times roll”), we made “gumbo,” something out of not very much. We used group texts and plenty of emojis and memes to bring levity to working remotely. We scheduled more staff retreats and utilized other community spaces to meet with youth and families. It’s still not the same; “our lives were forever changed.” People say that a lot now.

Some 230 youths, aged 13 to 20, are held in state prison in Louisiana today. More than 90 percent of them are Black or brown, and more than 40 percent are there for nonviolent offenses. Typically, they are poor and were burdened by social inequities, lack of quality education, and mental health care, meaning shrunken opportunities and support. (In the pandemic, a Save the Children study ranks Louisiana last in the nation in protecting children from hunger, educational disparities, and family economic insecurity.) Parents and other caregivers seek help from government and find none due to systemic disinvestment. Their children feel ignored and invisible, and end up acting out: fighting, stealing, breaking into cars, things not at all unique to these children. If they were the children of elected officials or of white parents of means, they would probably never see the inside of a prison. Such infractions would be regarded as acting out; the youngsters would be sent to diversion programs and kept at home. For children incarcerated for violent offenses, being locked in a cage doesn’t lead to rehabilitation. Prison is a violent environment. Eventually, they will return home, again to little or no support. The cycle is made, and often continues.

Working virtually over the past year was an easy transition for me. Personally, I am an introvert, so the worst period of the pandemic gave me an unusual opportunity not to worry about going out of the house. It gave me the chance to slow down and hang up my superwoman cape. The March 23, 2020, stay-at-home order allowed me to spend more time with my elderly mother, who lived with me; to care for her safely at home until her death, unrelated to Covid, on December 20.

A month before the lockdown, I had some friends in town. Mardi Gras was early last year, February 25, and my friends wanted the full experience. I took them to all the parades; we walked from uptown St. Charles Avenue to the Faubourg Marigny area, which is on the other side of the French Quarter, about four miles away. At every opportunity, we grabbed good food, took in the scenes, and drank hand grenades—a specialty cocktail served frozen or on the rocks at only two licensed nightclubs. We had a blast. Not long after that, I was blessed to be able to hang out with my daughter, who had flown home from Philadelphia. Little did any of us know then, or even after the lockdown order came, how long it would be before we could see friends and family again, or enjoy the city’s pleasures, or even spend some quality girl-time together, but at least we had those experiences.

A Prisoner Videotaped Covid Conditions Last Year. Where Is He Now?

News From Home, and Other People’s Homes

When Governor John Bel Edwards put the state on lockdown, emphasizing that to stay safe we had to stay home, the order should have applied to the children incarcerated in state and private facilities. Ironically, when Covid-19 took over our lives, FFLIC was beginning to examine how our children were doing 15 years post-Katrina. In our assessment, it’s as if the laws and policies that were put in place in 2003 to reduce incarceration and treat children humanely were never passed. Despite all the work of advocates, fighting so that our children’s youthful mistakes might be met with programs and treatment in their communities, not with shackles and cages, it’s as if reform were never promised. Promises and reforms don’t seem to transfer from one administration to the next. During the pandemic, we have continued to hear loved ones’ cries for their children, who, instead of being with their families, were held in isolation, unable to see visitors for a year.

On March 25, 2020, we learned that three youths locked in Louisiana prisons under the Office of Juvenile Justice (OJJ) had tested positive for Covid-19. Our children literally had no way to protect themselves from infection, no way to avoid contact with others. By the summer, Louisiana ranked fourth in the country per capita for all children in prison who had tested positive, almost twice the national average. In juvenile prisons, workers were testing positive as well. They were replaced by inexperienced probation officers, who often resorted to tasing children (an illegal practice) to calm their outbursts of anxiety. Because counseling and education services were canceled, children were, in addition, left with nothing to do. “I don’t want to die here, not in here,” one said.

FFLIC joined with the Youth First Initiative and more than 22 organizations across the country to call for Freedom for Our Youth. We wrote letters to the governor and other elected officials demanding that they follow the CDC’s best practices. We petitioned the governor and made phone calls, lots of phone calls. We organized an emergency town hall meeting to hear parents’ concerns. We continued to provide support and advocacy for parents, who were desperate to hear from their children.

The governor never budged. Children were not sent home. To date, 61 youths tested positive for Covid-19, according to the OJJ’s website, and 61 have recovered; 105 staff tested positive, and 102 recovered.