unset ark, rooklyn—Who hasn’t come to terms with their own mortality over the past year and a half? So many people had life-changing realizations. Like others, I made a decision based purely on impulse. I went back to school. I hated the idea, in a way. Don’t get me wrong; I left undergrad with a deep appreciation for learning but understood that education can’t be bounded within an academic institution. The pandemic shifted my perspective. I needed a safe space to learn. My job with the New York Fire Department allowed me to stay home with my family for longer stints as I attended school virtually. Most important, I had something to do besides worry. I entered the screenwriting track at CUNY’s Feirstein Graduate School of Cinema. I was processing what was happening in the world, and what was happening with me, and my family. And though communications about our works in progress were remote, I wasn’t alone.1

Yera Dahora is a talented director from São Paulo. For one of my classes, I wrote a short script that got thrown into a metaphorical hat from which first-year directors had to choose a story. Luckily, Yera chose mine.3

Yera was based in Brazil and couldn’t travel to the United States. The film would be shot in Brazil, with Brazilian actors and crew. Almost all of our discussion took place via WhatsApp.4

I gave Yera the nickname Captain. She had control of the ship and was leading us to shore on the stormiest of nights. But before I received that message from her, I was a little shook. I had listened to harrowing reports on NPR. Doctors from Brazil spoke of the shortage of oxygen supplies. People with Covid were dying of asphyxiation. The new strain in Brazil was more contagious. I asked myself questions like, Is this right? Is it really possible to execute this safely? Am I the mayor from Jaws right now? We weren’t the only students experiencing setbacks. Scores of Feirstein students were not able to finish their thesis films. CUNY protocols enforced far more restrictions than film industry standards. All of the students experienced a collective anguish. From the outside looking in, these preoccupations seem kind of childish in the context of a pandemic. But creating art is more than just producing an object. I had a cathartic experience writing the script. The story was inspired by a conversation with my daughter—when I was trying to put her to sleep, and accidentally gave her an existential crisis while answering her questions about the universe. I called it Goodnight Sun.7

FATHER: The star light we see comes from distant suns in galaxies far, far away.8

FATHER: Another cool thing is some of those suns no longer exist.9

OCTAVIA: How do we see the light?10

Back when I was starting to transform the story, I contracted Covid-19. During my recovery and isolation, I lost my aunt Hope Johnson. She had health issues from serving as a chaplain during 9/11; those health issues were exacerbated by quarantining. I had to wait several weeks to mourn with my family. I didn’t need more time to worry. I remembered that Hope and her twin sister, Janice, had borne witness to my transformation into fatherhood. Hope had always shared with me stories of her late father. My favorite was about how he made sure to let his daughters know there was no Santa Claus. “He wanted us to know that a Black man bought these gifts,” Hope said, with a cackle. All of these things had been in my head and heart as I wrote.11

Yera shared casting videos and pics. We talked through each tension in a scene. The script was translated into Portuguese. I worked with my friend Michi Osato, who helped me read through the translated version so that I could continue to share notes with Yera.13

The film was finally shot. It is currently in post-production. Yera will be traveling to the US soon. My first year of grad school is over, and even as I rummage through WhatsApp messages, all of it feels unreal. What we managed to do together…15 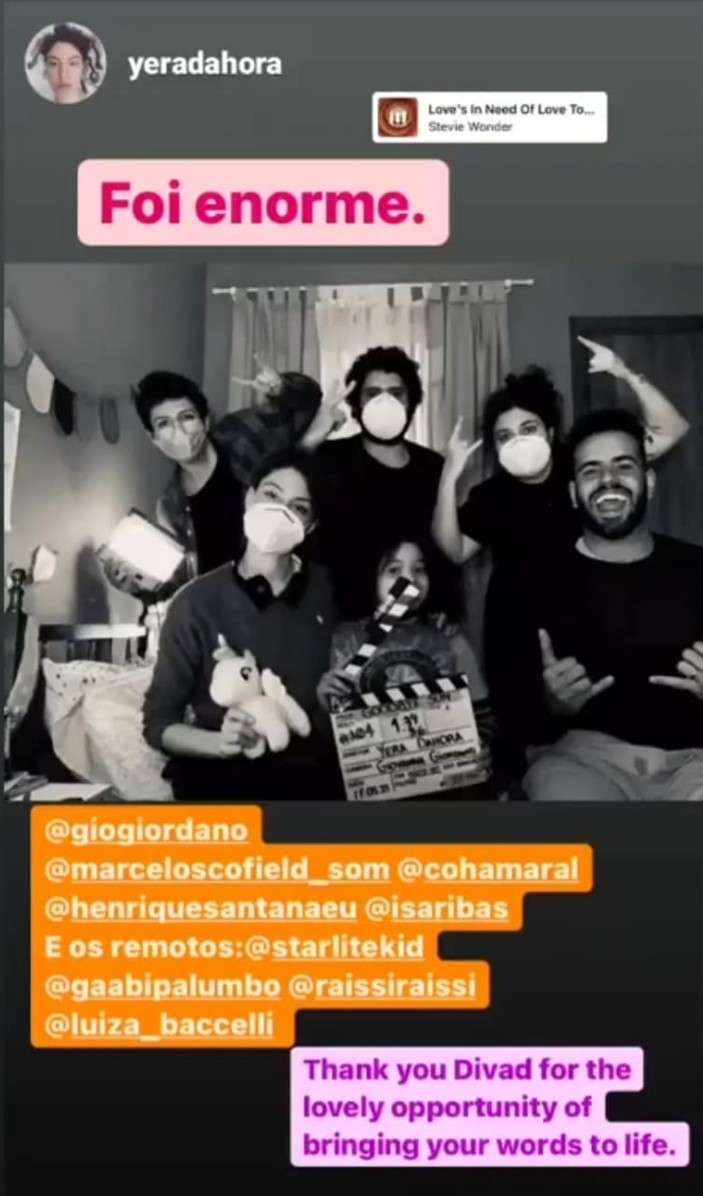 I told Yera that I felt like crying after seeing this.17

Scenes From a Pandemic is a collaboration between The Nation and Kopkind, a living memorial to radical journalist Andrew Kopkind, who from 1982–94 was the magazine’s chief political writer and analyst. This series of dispatches from Kopkind’s far-flung network of participants, advisers, guests, and friends is edited by Nation contributor and Kopkind program director JoAnn Wypijewski, and appears weekly on thenation.com and kopkind.org.18