Can anime become prophecy? The 1988 Japanese anime classic Akira predicted that Tokyo would host the 2020 Olympics. One scene featured a billboard reading “147 Days Until the Games”—directly beneath it someone scrawled in graffiti, “Just cancel it!” Here we are roughly 140 days ahead of the Tokyo Summer Olympics, and the cancellation—or postponement—of the Games is a real possibility, because of the emergence of COVID-19, or the novel coronavirus.

As Stanford University professor Yvonne Maldonado put it, with the Olympics, “You bring a lot of people together, and then you ship them back all over the world: That’s the perfect way to transmit.” The infectious disease specialist added, “If you really want to disseminate a disease, that would be the way to do it.”

At least one member of the International Olympic Committee, Dick Pound of Canada, seems to agree. In an interview with the Associated Press, he set off alarm bells, stating that the International Olympic Committee (IOC) probably needs to decide whether to press ahead with the Tokyo Games by the end of May. “In and around that time, I’d say folks are going to have to ask: ‘Is this under sufficient control that we can be confident about going to Tokyo or not?’” Postponing the Games—an idea posed by Seiko Hashimoto, Japan’s Olympic minister this week—is now an open possibility, but also unrealistic, as doing so would interfere with the US college and NFL fall football schedule. Given the billions that NBC has plunged into the Olympics—the network forked over $4.4 billion in 2011 for broadcasting rights through 2020 and then a whopping $7.7 billion for the Games running through 2032—its insistence would almost certainly be that the Games must go on, short of a global pandemic.

In truth, though, the Games should have been canceled well ahead of the coronavirus outbreak, especially if Olympic organizers and their allies in Japan’s government cared about public health. Tokyo organizers have branded the Olympics the “Recovery Games,” replete with “recovery monuments” to honor the triple-whammy earthquake, tsunami, and nuclear meltdown at the Fukushima Daiichi nuclear power plant in 2011. They even created a bizarre graphic (pictured below) that depicts a circle of appreciation, with “the disaster-affected areas” offering support for the Olympic athletes, which will “cheer up” the world. “The world,” in turn, will express gratitude, which will “cheer up” the disaster-affected areas. (The graphic was available on this website until today.) 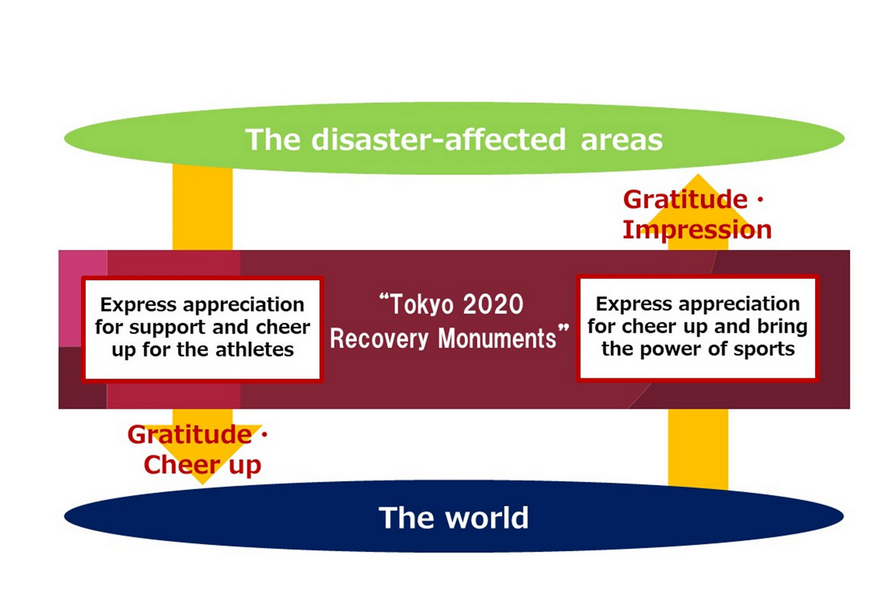 Graphic of “the disaster-affected areas” that will “cheer up” the world, which was available on Tokyo 2020's website until today.

This, of course, is pure-grade PR gibberish. We visited Fukushima in July 2019 and spoke with locals who were livid that Fukushima was being used as an Olympic prop. We saw “black pyramids” comprised of large plastic bags of radiation-drenched soil. We saw abandoned homes and businesses that surely could have used the billions that are being funneled into the Games—some $26 billion, according to a government audit, despite the fact that the original price tag for the Tokyo Olympics was $7.3 billion.

Instead of material support, Olympic honchos have offered Fukushima residents mere symbolism: The Olympic torch relay will kick off in Fukushima next month, despite the fact that Greenpeace recently uncovered radiation hot spots along the torch relay route. Olympic bigwigs have also scheduled baseball and softball games in Fukushima Prefecture. In short, the “Recovery Games” moniker amounts to a cruel joke. As Satoko Itani, a professor of sport, gender, and sexuality studies at Kansai University, told us, “This Olympics is literally taking the money, workers, and cranes away from the areas where they are needed most.”

The coronavirus may well benefit elected officials with an authoritarian streak, as public health crises can be a recipe for free-range autocracy. Japanese Prime Minister Shinzo Abe has long demonstrated a “disturbing authoritarian pattern,” as Bloomberg News referred to it. And he has also shown an alarming capacity to lie to get what he wants. Shinzo Abe has been adamant that there is no need to postpone the Tokyo Games, but there’s a “prime minister who cried wolf” dynamic at play here. After all, back in 2013 when Tokyo was bidding on the Olympics, he told voting members of the IOC who were jittery about Fukushima that the situation was “under control” even though it clearly wasn’t. For many, when they hear Abe and other officials saying that the coronavirus will not affect the Olympics, they hear the resounding echo of previous empty promises.

It must be noted that even if they cancel the Tokyo Games, the damage has already been done. Everyday people have been displaced for Olympic facilities and that cannot be rolled back. Workers have set up infrastructure in Fukushima and their exposure to radiation has already taken place.

What about relocating the Games to a previous host? Shaun Bailey, a candidate running for mayor of London, suggested transferring the Olympics there, but many of the 2012 venues are gone and residents are now living in the apartments that previously made up the Olympic Village. Rio, host of the 2016 Olympics is an obvious no-go, with venues in various states of dilapidation and the country mired in a right-wing hatescape that does not even vaguely chime with the lofty principles enshrined in the Olympic Charter. And cariocas—Rio’s residents—have little interest in the Olympics’ returning to town. The IOC left a bitter taste in Rio, when it said it was unwilling to help them pay off a few bills left in the Games’ wake.

As for the economic damage that canceling the Olympics could do to Japan, one could argue that the harm has been done. In addition to the displacements, the Olympics have already granted huge giveaways of land to the developers who are building the Athletes Village and that will not change because of a virus—or even a cancellation. The writing is on the wall: There is ample reason to cancel these Olympics for the good of Japan. The coronavirus only lays those reasons bare.