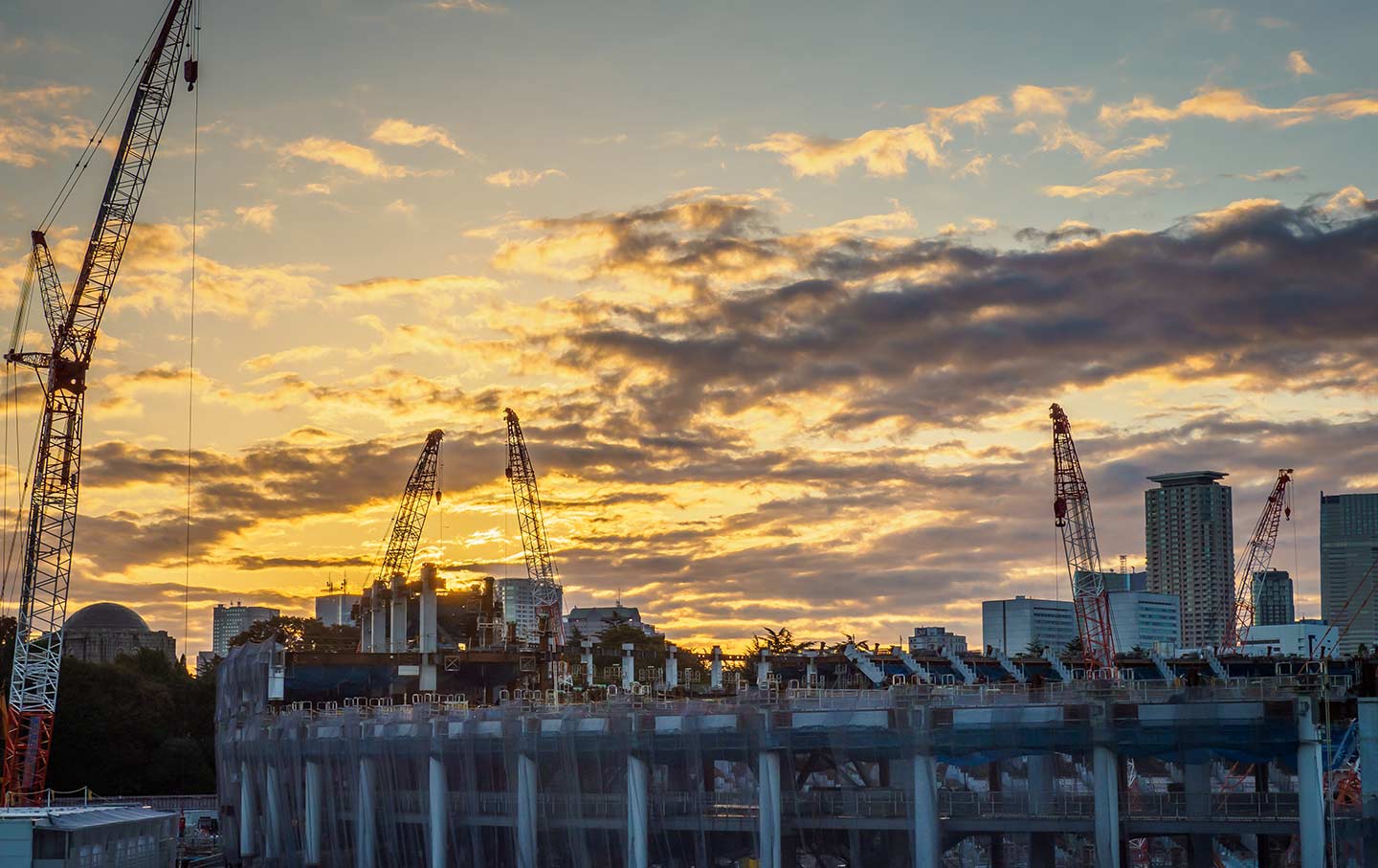 The 2020 Olympic torch relay will commence in Fukushima: a place more often associated with a 2011 earthquake, tsunami, and nuclear disaster than international sports. That’s no accident: the location is meant to convey a narrative of recovery, and the idea that Fukushima is a safe place to visit, live–and of course, do business. Olympic baseball and softball games, also to be held in Fukushima just 55 miles from the meltdown, are meant to hammer the message of these “Recovery Olympics,” as Tokyo 2020 organizers have branded them, home

But after a visit to Fukushima, their claims seem questionable at best. In fact, the entire setup is a profoundly cynical act of “post-truth” politics. Fukushima is not yet safe, and no amount of sunny rhetoric from Olympic bigwigs as well as Japanese politicians, can make it so.

We traveled to Fukushima on a bus full of journalists, filmmakers, and activists from around the world. We were accompanied by professor Fujita Yasumoto who carried a dosimeter, a device that charts the levels of radiation. With two hours to drive before hitting Fukushima, his dosimeter read 0.04; anything above 0.23, he told us, was unsafe. The needle jumped further as we approached the nuclear plants and attendant cleanup operations. Outside the Decommissioning Archive Center, it moved into unsafe territory with a 0.46 reading before spiking to a truly alarming 3.77 as we approached Fukushima Daiichi Unit 1 reactor, one of three that melted down. The Olympic torch run is currently scheduled to pass through some of these high-contamination areas.

As we entered Fukushima, we started to see what looked like black Hefty garbage bags, filled with radioactive topsoil that had been scraped up by workers, most of whom, we are told, travel great distances to Fukushima to work. Thousands of these bags—which locals call “black pyramids”—are piled on top of one another, but the toiling workers aren’t wearing hazmat suits. Some of the piles of bags have vegetation popping out. The sight of the plants poking through the toxic muck could be taken as a sign of hope, but, for others, they’re a portent of danger, raising fears that the wind will blow the most contaminated parts of the topsoil into the less radiated parts of the city.

No one here we met is buying Japanese Prime Minister Shinzo Abe’s line from 2013 when he tried to assuage the concerns of voters at the International Olympic Committee by telling them that things in Fukushima were “under control.” Hiroko Aihara, an independent journalist based in Fukushima, said to us, “The government has pushed propaganda over truth. This has people in Japan divided as to how serious it is. But for the people who live here, the crisis and the cleanup and contamination continue.”

The scientific studies about how safe Fukishima are at the moment are in great dispute. National travel guides put the area that is unsafe at only 3 percent of the prefecture. However, as Scientific American wrote, “In its haste to address the emergency, two months after the accident the Japanese government raised the allowable exposure from 1 mSv annually, an international benchmark, to 20 mSv. Evacuees now fear Abe’s determination to put the Daiichi accident behind the nation is jeopardizing public health, especially among children, who are more susceptible.”

We also spoke with Masumi Kowata. She is a remarkable individual, and the only woman on the 12-person Okuma Town municipal council in Fukushima. She is also the only person on the council who is speaking out on the dangers of nuclear power. Kowata was living in Fukushima when Abe made his grand pronouncement. She said, “Things were absolutely not ‘under control’ and nothing is over yet. The nuclear radiation is still very high. Only one small section is being cleaned. The wider region is still an evacuation zone. There is still radiation in the area. Meanwhile, we’re [hosting] the Olympics.”

The cynicism of branding this “the Recovery Olympics” can also be seen in the streets of Fukushima. Numerous people are still displaced and living outside the prefecture; they’re in the tens of thousands, although the exact total has not been determined. Whatever the number, there is no question that the part of the prefecture surrounding the nuclear meltdown feels empty. In a country with a remarkable lack of dilapidated buildings, they conspicuously blot the landscape in Fukushima. What was destroyed by the earthquake, tsunami, and nuclear meltdown hasn’t been rebuilt. Many businesses also have been “abandoned by owner,” an all-purpose explanation for the state of things. Both homes and businesses—with the crumbling signs for the titans of Japanese corporate culture—Sony, Mitsubishi and Honda—sit vacant.

Despite this bleak scene, Kowata somehow brims with fighting energy. “The local people have come to me and told me to tell the world what is actually happening,” she said. “That’s where I get my strength. There are people getting sick. There are people who are dying from stress. The world needs to know.”