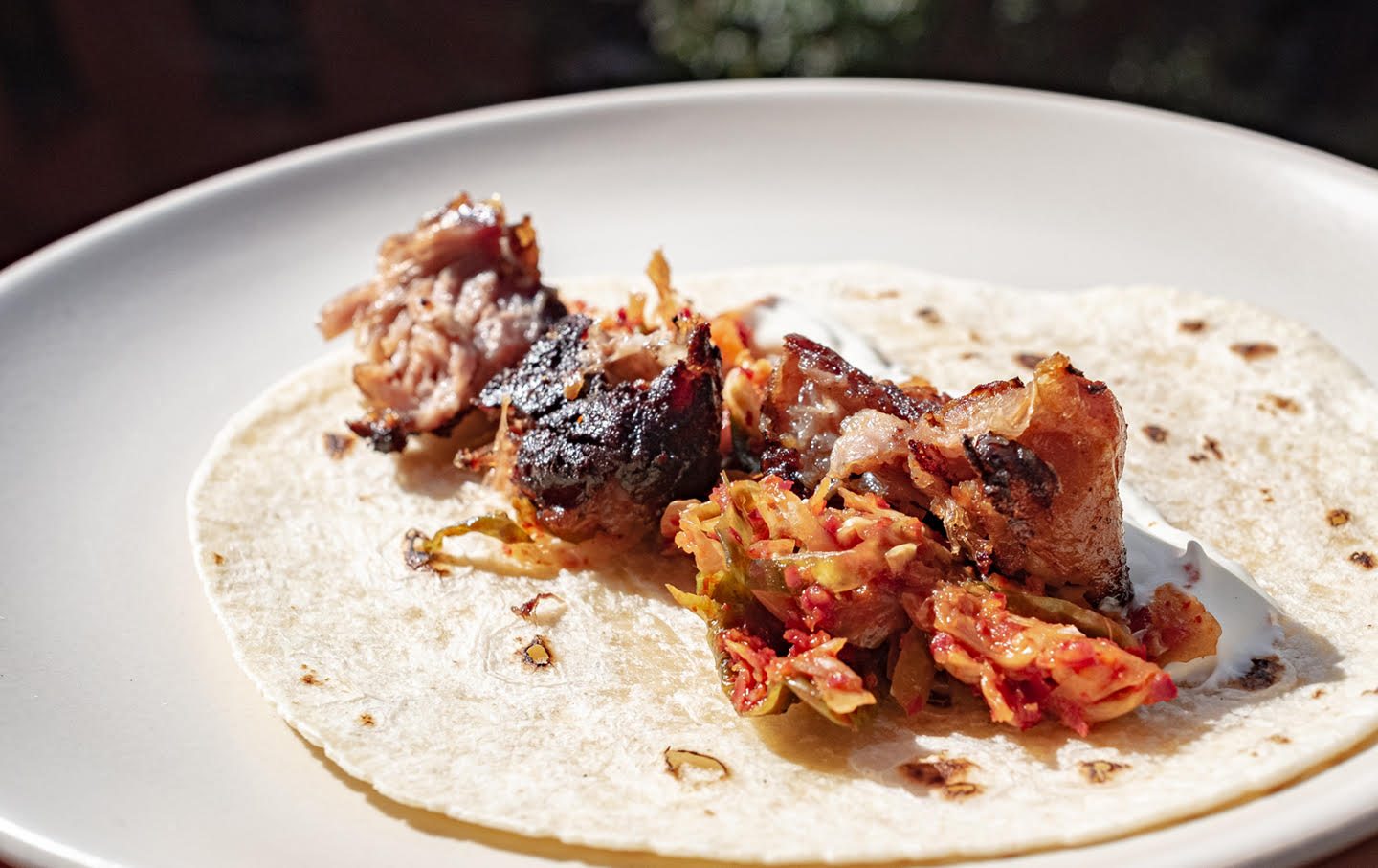 Kimchee and carnitas taco with crema; add cilantro and slivers of fresh pineapple, if you like. (Photo: Jon Pollock)

rooklyn—Quarantine has been a shock to our systems that will continue to reverberate in many ways. It has shocked me to mindfulness, especially about my consumer habits. I marvel at old restaurant receipts and wonder, how did I become the person who casually spent so much for this cocktail or that itty-bitty plate of fried something or other? How did I come to discard aluminum foil after one use, to waste nourishing foods like broccoli stems or onion skins (great in stock, providing color and flavor), and toss perfectly good leftovers in the trash? Those who raised me would be appalled.

I grew up in Hawai’i on the edge of a sugar plantation in its declining years, the sweetheart trade deals cut between the US government and missionary agribusiness oligarchs having finally expired. Life wasn’t exactly luxe. We scraped by on what we cobbled up—hand-me-down clothes, bicycles built from spare parts, and home haircuts (scissors, bowl, one straight line around during the winter, a buzz cut in summertime). One of my older cousins, a family success story as a schoolteacher, would joke that if the little ones were lined up for a picture in front of my grandmother’s house, we could caption it “Save the Children” and make money placing an ad in the back of tabloid magazines.

Only we didn’t need saving. We were never without the things we needed, especially food, and mainly because we took nothing for granted. We were mindful. Now, with anxiety rising all around, the memory of that kind of care has been a comfort, not to mention a means of stretching my shrinking bank account.

Among the many foods of the beloved poverty kitchen of my Hawai’i is kimchee, a staple eaten almost daily, even by children. Some people write it “kimchi.” I do not. That spelling is derived from the Japanese kimuchi. Given Japan’s historical atrocities against Korea, I defer to Koreans about the transliteration of their national dish.

Sniffing Our Way Back

The Most Vital Transition Is Ours

This recipe isn’t traditional. My grandmother’s is lost to time and death. Making really traditional kimchee takes ingredients harder to find, and a lot more time and effort. Over years of living in the continental United States, I pieced this together from tips gleaned from the Internet and shared by friends. I find it totally satisfying. I use kimchee in the syncretic food tradition of Hawai’i, which is to say in lots of unconventional ways, fusing it with the cuisines of Puerto Rico, Portugal, the Philippines, Samoa, indigenous Hawai’i, Japan, China, and on across the diversity of cultures that make up the islands’ population. I suggest you do, too. My favorite is kimchee chopped up like coleslaw on Portuguese sweet rolls with mayo and spicy linguica or grilled teriyaki chicken thighs, deboned, of course.

Kimchee is the easiest of all fermentation processes. The less familiar ingredients aren’t hard to find in Asian groceries or online; once purchased, they’re pantry basics. Western foodies embrace them for a reason—they’re delicious. Think of shrimp paste and fish sauce as umami bombs to make foods like packaged ramen or, seriously, cream soups taste new.

Cut the cabbage in half by length, and then again across by width into approximately 1½ -inch chunks. Toss with 2 tablespoons of salt and the 1 tablespoon of sugar in a large bowl. Put a weight on the cabbage (I nest a smaller bowl filled with fresh water inside of the bigger bowl, on top of the vegetable), wrap the whole thing in plastic wrap, and place it in the refrigerator or other cool place. Let it sit this way for an hour, or overnight if you like.

While your cabbage is pickling (and weeping a lot of water), make the kimchee paste. Blast garlic, ginger, gochugaru, sugar, fish sauce, soy sauce, and bagoong in a blender until well combined. Remove the paste from the blender to a bowl and add some water, a few tablespoons at a time and no more than a scant cup, until the paste is smooth, about the texture of a creamy salad dressing.

Drain the cabbage of excess water; give it a squeeze to really get the water out. Then mix in the sliced radishes, carrots, and onion. Add the kimchee paste. Make sure you coat the cabbage well. Transfer to jars and refrigerate. Your kimchee will be ready in about two days, though it will be better in a week.

I call this Kimchee Out of Anything because, to me, kimchee really can be made out of almost anything edible. Fruit, like green mangos, can make delicious kimchee. Even fresh or dried fish works. One favorite of my childhood is bacalao, or salt cod, rehydrated and then squeezed dry before being shredded and bathed in kimchee paste, then cured for a day or two. Don’t stop there. Chard (stems lightly blanched before being added to the greens), carrot tops minus the tough ribs, blanched cauliflower, cucumbers, and lots of other vegetables can be made into kimchee. The rule in my kitchen is if you have vegetables that look like they’re on their last legs, pickle or ferment them. Kimchee expands your eating possibilities, and your pleasure, too.