Men stand in a US Immigration and Border Enforcement detention center in McAllen, Texas. (Josh Dawsey / The Washington Post via AP, Pool)

Multiple Immigration and Customs Enforcement (ICE) detainees have been put in isolation for medical reasons, according to an internal Department of Homeland Security (DHS) coronavirus report obtained exclusively by The Nation.

The report, marked “For Official Use Only” and dated March 19, states that ICE’s Health Services Corps had isolated nine detainees and that it was monitoring 24 more in 10 different ICE facilities. 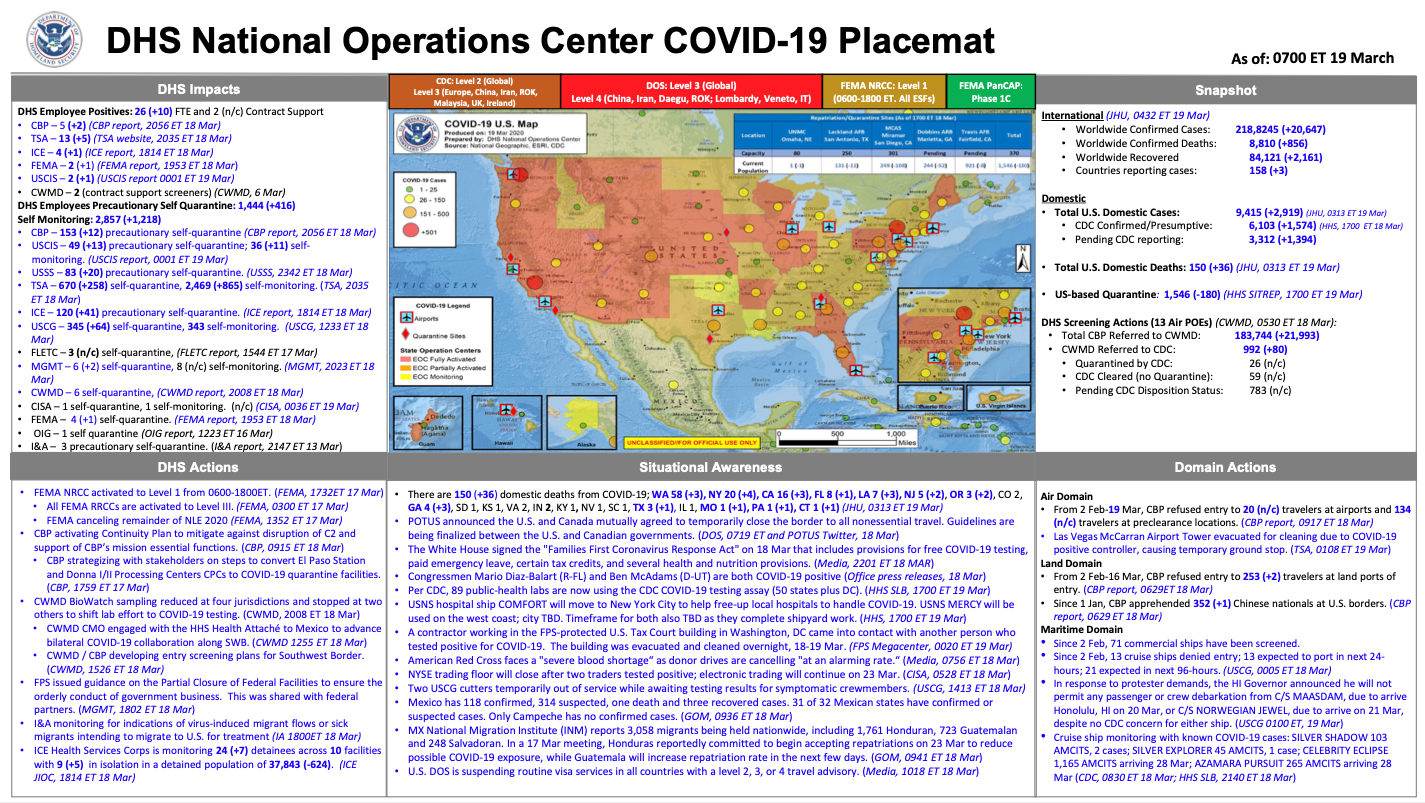 The document does not specify what illness these individuals are being monitored for, and an ICE spokesperson said that “detainees can be quarantined as a result of any variety of communicable diseases.”

However, the document is titled “DHS National Operations Center COVID-19 Placemat,” which suggests that the agency’s actions are in direct response to the Covid-19 pandemic.

In addition, the document says Customs and Border Protection (CBP) is working to convert several of its major border facilities into quarantine facilities. One thousand, four hundred and forty-four officials with ICE and CBP’s parent agency, the DHS, were in “precautionary self-quarantine” at the time of the document’s writing, including 153 CBP officials, the report says.

The document was provided by a federal intelligence official on condition of anonymity to avoid professional reprisal.

Unsanitary conditions in both ICE and CBP detention facilities are well-documented, and have led to concerns about facilitating the spread of coronavirus. In July, a DHS Inspector General report found “dangerous overcrowding” and squalid conditions among its southern border facilities. Last week, two doctors who work for the DHS wrote a letter to Congress warning of an “imminent risk to the health and safety of immigrant detainees” as well as the general public in the event that the coronavirus spreads among ICE detention facilities.

The letter went on to warn of a “tinderbox scenario of a large cohort of people getting sick all at once.” One day before the letter was sent, ICE informed Congress that at least one of its employees had tested positive for the coronavirus.

In June, I obtained an internal ICE memo describing multiple deaths in ICE custody as having been preventable. The memo, sent from an ICE Health Services Corps (IHSC) official to ICE’s then-director, Matthew Albence, in December 2018, stated: “IHSC [ICE’s Health Services Corps] is severely dysfunctional and unfortunately preventable harm and death to detainees has occurred.”

Despite these conditions, ICE insists no detainees have been found to have the coronavirus.

“At this time, no detainees have tested positive for the virus,” Danielle Bennett, a spokeswoman for ICE, told The Nation on March 23. “Detainees can be quarantined as a result of any variety of communicable diseases, not just Covid-19.”

Asked to clarify if each of the ICE detainees presently in isolation have been tested for Covid-19, Bennet replied: “Yes, testing is being done in accordance with CDC guidelines.”

However, the report obtained by The Nation is titled “DHS National Operations Center COVID-19 Placemat,” and the rest of the document appears to pertain entirely and explicitly to the coronavirus. It is unclear why it would include detainee isolation data pertaining to another illness. (Aside from ICE, the report does not mention detainee isolation numbers in any other DHS agency.)

Under pressure to respond to the epidemic, ICE says it has dramatically scaled back its enforcement activities. But many say that’s not enough.

In addition to the two DHS doctors who warned Congress about the dangers posed by the detention facilities, 3,000 medical professionals signed an open letter urging ICE to release its detainees in order to prevent the spread of the coronavirus. 51 ICE detainees sent a letter to rights groups warning that they were being exposed to flu-like symptoms. And it’s not just advocates—ICE itself appears concerned, having requested 45,000 respirators last week.

The document provides further insights into DHS’s pandemic response. One segment of the report says that DHS’s Intelligence & Analysis is “monitoring for indications of virus-induced migrant flows or sick migrants intending to migrate to U.S. for treatment.”

The report also notes that CBP has activated its continuity plan. The Nation recently published CBP’s pandemic response plan, which contains a continuity plan in anticipation of a substantial loss of personnel capacity as well as morale due to illness.

One passage in the pandemic response plan states: “Many Americans will die from the virus, spreading fear and panic among the population, including CBP employees…. Pandemic influenza is expected to cause massive disruptions in travel and commerce, and may challenge the essential stability of governments and society. In spite of this, CBP must continue to carry out its priority mission to prevent the entry of terrorists and their weapons, regardless of the circumstances.”