Next gen rising: Greta Thunberg, the teenager who helped mobilize not only a generation of young people but also their parents. (Michael Campanella / Getty Images)

What is now known as the youth climate movement burst onto the international stage when Greta Thunberg, a Swedish teenager and climate activist, began to skip school in the fall of 2018. Every Friday, Greta, then 15, would sit outside the Swedish parliament with a sign that read Skolstrejk för Klimatet, or “School Strike for Climate.” She was often photographed alone.1

But standing just off to the side, supporting her activism as it grew from weekly strikes to frequent interviews to far-reaching speeches and a trip across the Atlantic Ocean, was her father, the Swedish actor Svante Thunberg. He made her quest to wake the world’s grown-ups possible—even as he himself was woken by it.2

In a 2019 interview with the BBC, Svante explained that he’d initially been uncomfortable with his daughter’s visibility as a young climate activist. But after he saw how dedicated she was to the movement and how fulfilling she found it—how it lifted the depression that had weighed her down after she learned of the crisis—he supported her efforts and put parts of his own career on hold to travel with her.3

“We thought it was a bad idea—putting yourself out there with all the hate,” Svante said. But, he added, “I can see Greta is very happy from doing this…. She’s in a very good place.”4

The Thunbergs’ story is unusual, but in its fundamental contours, it’s not unique. While Greta’s crusade has been playing out in front of a global audience, more intimate versions are unfolding in other households where teens reside. Across the United States, and the world more broadly, young people have been joining the climate movement. They have been forming organizations, agitating to change local policies, and taking to the streets. And as they have, many have been pulling their parents along with them. In a reversal of age-old norms, the younger generation has been leading the older. And the older generation has taken notice. Parents have been learning from their children and even supporting them.5

The young generation is “where the energy and the innovation is,” said Frederick Tutman, the riverkeeper of Maryland’s Patuxent and a longtime conservationist, who has observed how youth climate activists are transforming the movement and their elders. “‘Action’—I hear that term a lot with young people,” he said.6

Ananya Guruprasad, a high school junior in Minneapolis, is one of those young people who have embraced action. She joined Earth Uprising as an organizer a few months ago and has been busy raising awareness on local climate issues, like the replacement of the controversial Line 3 oil pipeline, and setting up Q&As with elected officials. Earth Uprising, which was founded by the New York City–based climate activist Alexandria Villaseñor in 2019, is a youth-led coalition in 20 countries that supports other climate organizations.7

Ananya’s concerns about climate change grew out of personal experience. She saw how bad her grandfather’s cough was when she went to visit him in Bangalore—likely the result, she learned, of the extreme air pollution in many Indian cities. She saw her own sister break out in hives from the pollution when they visited relatives there. And she watched in horror last year as millions of acres burned across Australia, uncertain if other members of her extended family would be exposed to the blaze. Soon after, she began to research how to become a part of the global climate movement.8

“I saw the impact of youth-led movements…especially during the school shootings” in 2018, Ananya said. “That kind of just made me realize that…we do have the power to make an impact.”9

The “About” page on Earth Uprising’s website states that the group is “led by youth and supported by adults,” and that mantra has proved accurate in Ananya’s own life. Her parents saw her become invested in organizing with other young people as she began to spend hours coordinating potential actions with them. And as they watched, they too became invested.10

“My initial reaction was that this was just another passing phase as a teen, and that she would eventually move on to other things,” said Guruprasad Basavaraj, Ananya’s father, in an e-mail to The Nation. “As she started expressing more interest and looking for avenues to contribute, I realized that this was something that she was really interested in and serious about.”11

Through his daughter’s organizing efforts, Basavaraj continued, he learned about climate tipping points, including the need to drastically lower carbon emissions within the next 10 years, before the damage becomes irreversible. The family is looking at different ways to cut its own carbon footprint. Basavaraj also discovered, somewhat to his surprise, the reluctance of political leaders and large corporations to address the climate crisis. “I have become more aware of the political and societal side of the environment,” he noted, “and I pay more attention to the happenings around climate change than I normally would have.”12 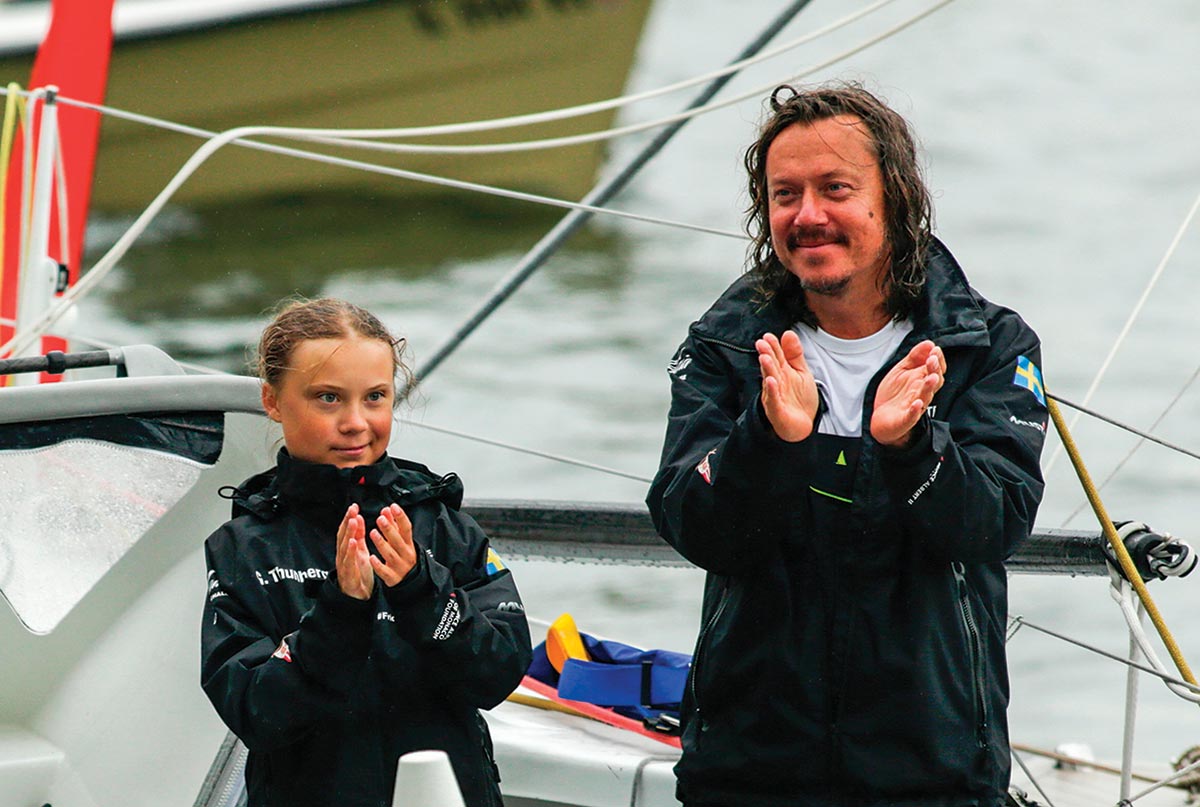 Kids at the helm: Kids at the helm: Greta Thunberg, then 16, and her father, Svante, arrive in the US after a 15-day journey across the Atlantic in 2019. (Kena Betancur / AFP Via Getty Images)

Emily Johnson has also pushed her family to learn more about local environmental policy. Like Ananya, she’s a high school student in the Midwest. In 2019, Emily started a local chapter of Fridays for Future, the group behind the youth climate strike movement, in Wausau, a small city in central Wisconsin. She’s helped organize rallies and connected with farmers about the challenges they face because of the crisis, inviting one to speak about his transition to sustainable farming methods. “He spoke at that rally about how he is personally being affected by climate change and what he has done to combat it,” Emily said. “Because of warming temperatures, a lot more pests and parasites are starting to grow.”13

Thanks to Emily’s activism, her mother, Sally, said that she too has been learning about local farming laws and the failure of current policy to address the needs of small farmers, whose crops and livestock are disproportionately affected by the climate crisis. Both described the political ideology in their area as conservative, and Sally said she has found herself speaking up against climate denial. She has also begun to defend climate policies like the Paris Agreement to community members.14

Parenting as a Radical Act of Love

We Should All Be Able to Have Babies Like White People

Across Prison Walls, I Felt My Parents’ Love

For Adèle Giovanniello and her mother, Kristen, local climate organizing has always been a shared interest. The teenager started the Eco Freakos Club at Aliso Niguel High School in Aliso Viejo, Calif. She credited her mother’s support and the efforts of other club members for its success in convincing the school to add water stations and raising the $12,000 to install them.16

Aliso Niguel has thousands of students but few places to refill water bottles. Students were constantly buying water in plastic bottles, so the club began to recycle them for money. “We petitioned for water stations at the school to reduce plastic consumption,” Adèle said.17

When they first decided on the campaign, Adèle and the club weren’t sure exactly where to start. “I said, ‘Why don’t you write to the PTA?’” Kristen recalled. “So in September, she got on the PTA agenda, and the PTA was super supportive,” agreeing to provide some of the funding if the club could come up with the rest. Kristen encouraged her daughter and the other club members to attend a town meeting and learn more about potential grants. At the meeting, they met the mayor and learned there was indeed a grant that could help fund the water stations. In order to secure it, the club had to present slideshows on how the stations would be beneficial for the staff and student body.18

And Adèle’s local climate activism has seeped into her family’s life in other ways. While they have always cared about reducing waste, they’ve begun to try to live more sustainably, boosting their efforts to compost and to shop for local and organic products.20

Meanwhile, Kristen has encouraged other parents who may be on the fence about their teens getting involved in the climate movement—especially if it means increased visibility—to give them the space to explore and connect with their peers about organizing. “I think, as parents, we often try to push our mistakes or things we wish we had done differently onto our kids,” she said. Instead, she advised, “Listen a little more to your kids, because they know what’s right for them. Do whatever you can to kind of support them.”21

Basavaraj agrees. He wishes he’d been more supportive of Ananya’s activism at the beginning. Now he’s grateful to see how many students are willing to make an effort to educate their communities and to hold local officials accountable. The climate crisis “is not an issue that they started, but one that they might face the consequences of,” Basavaraj said. “So seeing youth advocate for the solution of something that they did not cause—especially since it’s still something many adults tend to avoid—is quite inspiring.”22